What makes a great furniture company or design shop? There’s more to it than following trends—or even starting them. The best shops and companies feature curated collections that mix high and low, and bring new and relevant interpretations to reliable forms. Perhaps they incorporate craft without dismissing technology, or elevate luxury to a form of conceptual art. Maybe they design with an eye to the next generation, rather than just the next season. The people behind these brands and storefronts—some from design backgrounds, some not—tend to have a few things in common. They may wax philosophical about design, but they spend as much time with manufacturers and makers as with customers and critics. They give a lot of thought to the big picture, but they never stop sweating the details. Most of all, they excel at looking for talent, tirelessly and in unexpected places. Here are four important, up-and-coming companies that are getting it right. 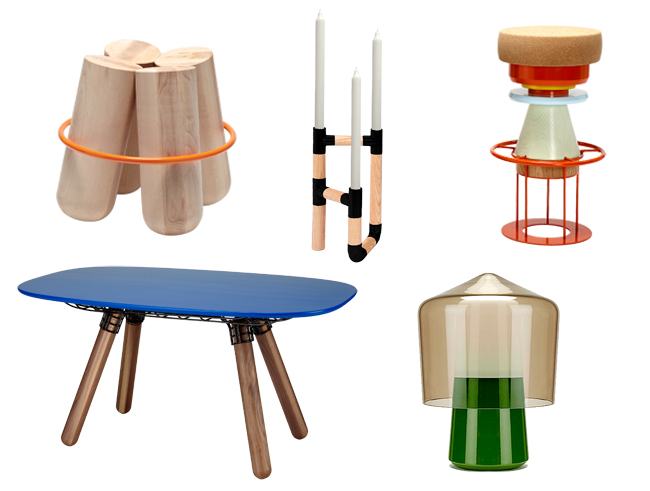 Clockwise from top left: The Bolt Stool by Note Design Studio, which was introduced as part of Jekyll & Hyde, the premier La Chance collection; Podium candleholder by Jorge de la Cruz and Diana Vernaza Gonzenbach, with metal links that can be easily reconfigured; Tembo stool by  Note Design Studio, also part of the Jekyll & Hyde collection; The Tip Top table lamp  by Jonah Takagi, has two layers of glass at the top, with an aluminum base; The Magnum dining table, by Pierre Favresse, consists of wood or marble legs and tabletop, joined by a metal matrix underneath.

To hear Jean-Baptiste Souletie tell it, you might think he and Louise Breguet opened La Chance on a passing whim. “We launched a furniture and lighting company so we could show the work of friends, and see more design that we like,” he says. Scratch the surface, though, and it’s clear that Souletie is passionate about materials, manufacturing, and the underlying vision of the La Chance brand. That vision includes a rejection of the cheap thrill: “You don’t buy something that will be fun for two years, and then throw it out. Too much of design is disposable now.”

Both designers themselves, Breguet and Souletie met in December 2010. “It was a good match,” Souletie says. “We began to work together in January, and fifteen months later we were showing in Milan.” The La Chance method crystalized during one of their earliest projects, the Tembo stool designed by Stockholm-based Note Design Studio. Souletie says, “We saw the design on the Internet, and we contacted them and said, ‘That’s what we want. Are you ready to go into production?’” As La Chance has grown, they continue to work that way: “Either we spot design that we like, or we contact the designer and we give them a fee to design for us. We have a network of factories and are very involved in the manufacturing process. For us it’s all-natural materials: solid wood, marble, glass. No plastic at all. These pieces will age well; they’ll develop a patina.” 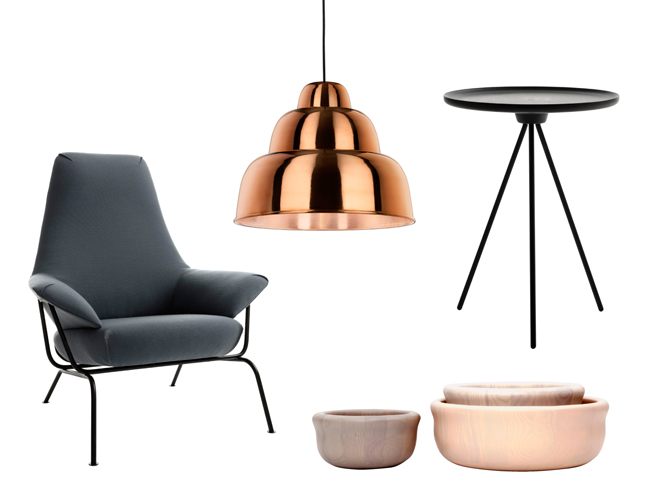 Clockwise from top left: The back of the Hai lounge chair, by Luca Nichetto, folds forward so the chair can be shipped flat and assembled without tools; The The Levels pendent lamp by Form Us With Love is available in three sizes and four finishes; The Key side table by GamFratesi was designed by Danish architect Stine Gam and Italian architect Enrico Fratesi; The Bowling series of nesting bowls by Petter Skogstad, Hallgeir Homstvedt, and Anderssen & Voll are crafted in ash wood stained in pink, white, or gray.

Joel Roos trained as a lawyer, but helping out with the family furniture retail business inspired him to start his own company. The result was One Nordic, a Finnish furniture company with a philosophy born of a few simple ideas: flat-pack shipping and no-tools assembly; beautiful, well-chosen materials; and the sturdy minimalist aesthetic for which Nordic design is famous.

Roos doesn’t limit himself to the Nordic countries; he looks for designers from all over the world. “The philosophy is to take every part of the picture into account,” he says. With One Nordic’s global reach, efficient manufacturing and shipping are major concerns. “We take that part of the equation and keep it in balance, never letting it be more important than quality or design. We talk a lot about effective shipping solutions.”

Flat packing isn’t news, but by applying it to products that approach high art in their commitment to aesthetic excellence, Roos has managed to decouple it from its down-market associations. He cites the Hai lounge chair, by Luca Nichetto, as an example. “It’s the kind of thing you would expect to ship all by itself in a special box,” he says. But the chair’s spare design suggested a simple solution: the components are modular, and the back simply folds down for shipping.

Unlike most design impresarios, when asked to pick a favorite piece, Roos gives a prompt answer. “Right now? Levels,” he says, referring to the pendent lamp by Swedish studio Form Us With Love. “What  a great piece—elegant, minimalist, warm.” 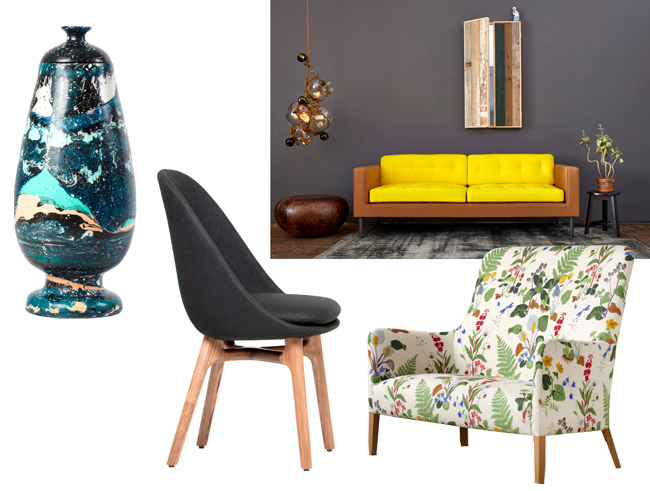 Clockwise from top left: The Sedimentation urn by Hilda Hellström is crafted in Jesmonite, a resin-based composite that mimics stone; The brand’s home page features a rotating set of interiors, including this one with the Tardi sofa and Knotty Bubbles chandelier by Lindsey Adelman and a wood cabinet by Piet Hein Eek; The two-seat Pendel sofa by Russell Pinch has a compact practical profile; The designers Neri & Hu sought inspiration from 1920s Shanghai for this elegant Solo dining chair.

More than ten years after opening the store, which showcased local talent alongside international names in its original location in Williamsburg, Brooklyn, it’s clear that Alhadeff still retains the level of enthusiasm he brought to the early days of the project. He attributes that, in part, to the designers he works with, such as Jennifer McCurdy, Jason Miller of Roll & Hill, and Lindsey Adelman. “What makes our store unique are the relationships we have with these amazing designers and makers,” he says. To connect with new talent, Alhadeff
also haunts craft fairs, seeking out artisans whose works the casual observer might not peg as high-concept design.

After years of dividing his time between New York and California, Alhadeff opened the Future Perfect’s San Francisco store in March. Expanding to the West Coast might seem like enough change for one year, especially for a company with such strong Brooklyn roots, but Alhadeff also launched a new version of the brand’s online store and the first collection of its new furniture line in May. “There’s much more to come for us,” he says. “We’ll continue to change things up.” 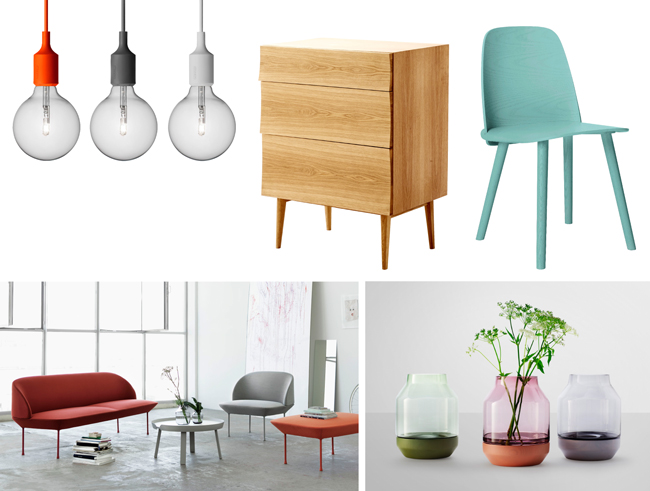 Clockwise from top left: The playful E27 Pendant lamp by Mattias Ståhlbom comes in a dozen colors; The Reflect drawer by Søren Rose is made in either natural or black-finished oak and evokes the natural light of Scandinavia; David Geckeler’s design for the Nerd chair was the third winner of the Muuto Talent Award; The The Oslo sofa and pouf by Anderssen & Voll cleverly conceal deep cushioning in a light streamlined silhouette; The Elevated vase by Thomas Benzen is a sparse, simple combination of glass and wood.

In 2006, when Kristian Byrge and Peter Bonnén decided to create a company devoted to Scandinavian design, they were determined to reinvig-orate the region’s weighty design legacy. Easier said than done: The challenge would be to honor the past while remaining flexible, mutable, and open to new ideas. To remind them of this, they chose the name Muuto, inspired by the Finnish word muutos, which means “change” or “new perspective.”

The firm’s lifeblood is emerging talent, which is where the Muuto Talent Award comes in. The annual competition attracts entries from all over Scandinavia, and the resulting designs have become linchpins of the brand. The winning entry in 2011 was David Geckeler’s Nerd chair. “Today it’s one of our most popular products,” Byrge says. “One of our primary goals is to be on the forefront in the development of these designers.”

This year’s winner was Tick Tock, Wooden Clock, a deconstructed timepiece by Charlotte Ackemar, a recent design-school graduate. Her attention to detail and narrative, as well as the distinct personality behind her design, were key factors in the jury’s decision. “To us, good design starts with the person,” Byrge says. “We handpick the best talent and give them the freedom to express their individual stories through everyday objects.”

The brand has an office in Copenhagen, but there is no brick-and-mortar location, or even an online store as of yet. Instead, the team works with dozens of retailers around the world. As Byrge notes, “The best part is doing something you have a strong passion for that creates joy around the world.”