Building Diplomacy: 50 Years of the Swiss Embassy in New Delhi

The story of how the Modernist landmark came to be

For more than a year, the Swiss Embassy in New Delhi has initiated a series of events that draws attention to the unique role architecture plays in fostering political and cultural relations between the two countries. These events, as well as the commemorative release of A Tropical House (gta Verlag publishers, 2014), celebrate the 50th anniversary of the opening of the Swiss Embassy, a relatively unknown gem of Modernist architecture.

In 1947 the newly appointed prime minister of India, Jawaharlal Nehru, launched a formal diplomatic initiative with Switzerland. The historically neutral country became the first to sign a friendship treaty with independent India and one of the first to establish a foreign presence in the capital of New Delhi.

Like much post-WWII diplomacy, architecture was the chosen medium for concretizing bilateral relations. Designed by Hans Hofmann and realized by Walter Rüegg after his predecessor’s untimely death, the Swiss Embassy is a remarkable example of postwar modern architecture and an attestation to the precarious process of manifesting abstract concepts of nationhood into the built form. “If it wishes to have a presence in underdeveloped countries and to exert a certain degree of influence,” the Swiss Federal Political Department wrote in 1959, emphasizing that “[a] concern for effectiveness must prevail over a concern for modesty.” Max Petitpierre, then president of the Swiss Confederation reiterated the sentiment, stating that a simple building would be interpreted by India as a lack of interest in the country. 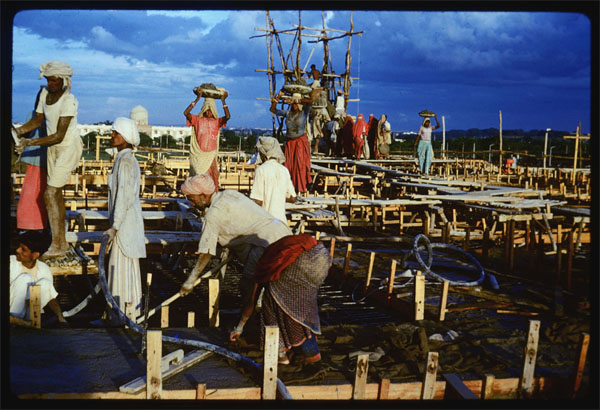 Construction of the roof of the embassy building

The Swiss government purchased a plot of 24,000m2 and chose Hans Hofmann, a professor at the Swiss Federal Institute of Technology, Zurich, as the embassy architect. Hofmann had a distinguished body of work that espoused elements of the modern Swiss exhibition style. The architect, however, had no knowledge of building in tropical climates, which was part of the Swiss government’s original criteria for selection.

Historical notes suggest that while Hofmann graciously accepted the project, he rather begrudgingly agreed to visit India, believing his “synthesis between functionality and beauty and a meaningful formal language that emerges from the distinctiveness of the architectural task,” would evolve through written correspondence with those already in New Delhi. It quickly became apparent that aspects of his original plan would need reworking: the desire for an aluminum roof, a steel frame, and the vision for the residence, chancery, and staff apartments to be housed in a single structure.

Hofmann made a ten-day trip to India in October of 1957, incorporating a brief visit to Le Corbusier’s Chandigarh. He returned to Switzerland enthusiastic, working on the embassy project until his unexpected death two months later. His young assistant, Walter Rüegg, inherited the project and moved to India until the embassy’s completion in 1963. Prime Minister Nehru, referred to as “the architect of modern India,” attended the opening of the embassy and praised the building both for its form and its symbolic power. 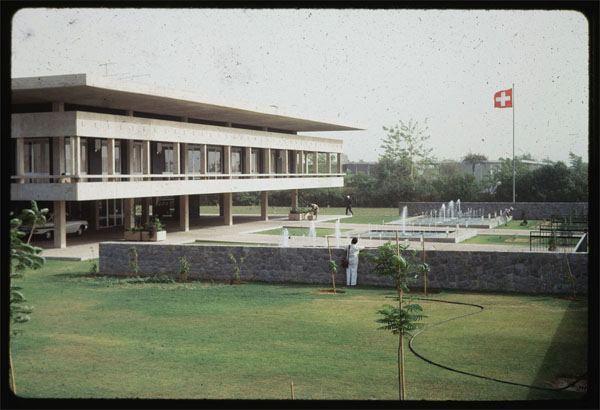 The Embassy of Switzerland in India upon its completion in 1963

Unlike most of the 60-some embassies in Chanakyapuri, New Delhi, the Swiss Embassy is completely visible from the street. The walk to the entrance gate is friendly, even casual. One can observe a handful of parked cars and two-wheelers at the end of the entrance path, a marine blue emanating from the bottom of a pool, and the inviting shade of ashoka trees. Aside from the small, white emblem of the Swiss cross, nothing about the building suggests nationalism, nationhood, or political ideology. The result however is truly a transcendence of place. One is no longer in New Delhi, nor in an embassy for that matter. One simply stands before a remarkable convergence of geometric forms and materials.

This initial, pedestrian-scale experience gives way to the full breadth of the 7,800-square-meter main building, which, following Hofmann’s original wishes, houses both the residence and chancery. Massive in size, the main building becomes monumental in feeling. It is at this vantage point that the Swiss Federal Political Department’s concern for showmanship over modesty is glaringly apparent. The Switzerland represented in this part of the building is not one of small geographical size, but rather one of “moral and financial power.”

Similar to Jean Prouvé’s buildings in West Africa, which were lifted off the ground in recognition of the local climate, Hofmann’s concrete building has a pilotis structure: slender, angular columns raise the black granite base of the building above ground level. These forms are imposing and rigid but, given their simple planar form, they keep the building open and transparent. The austere coutyard encasing the rectangular sliver of a reflecting pool and fountain feels both Moghul and Saarinen-esque. Elsewhere, the architects incorporated local materials such as kota stone from Rajasthan, marble, granite, and teak wood that lend the rational forms a tactile sensualness. In these ways, the embassy ultimately fulfills its original diplomatic intention. “It stands,” current ambassador Dr. Linus von Castemur explains, “whether explicitly or implicitly for values and idea; it represents one country within another.” 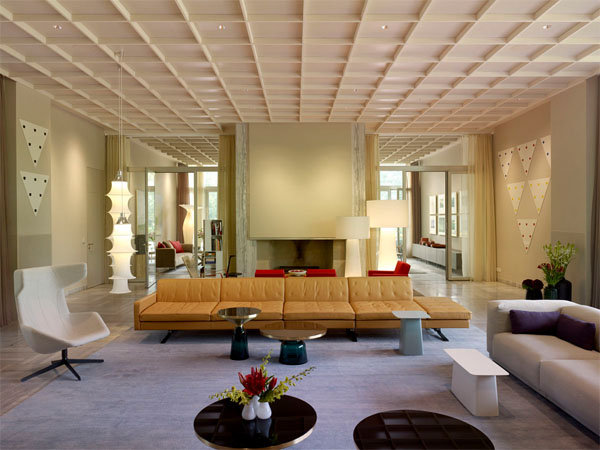 As we’ve seen, the project can be understood as an architectural exchange of ideas and forms. The reflecting pool, for example, is not just a pool, but also a cooling device, as is the high, inward slanting roof that provides natural ventilation from both below and above. Openness of form was a distinct trait of Western midcentury modern architecture but has always been a traditional element within the Indian vernacular. Yet the ground-level veranda and open meeting areas of the balcony areas go beyond any trite East-meets-West description.

The collaborative process that initially caused many delays in the completion of the Swiss Embassy has ultimately allowed the complex to age with grace. Apart from energy-related improvements, very few alterations to the building have been made. In celebration of the fiftieth anniversary, new furniture, lighting, and artwork have been installed. These upgrades (such as a stone installation from Bijoy Jain of Studio Mumbai, a bronze sculpture from Otto Müller, and paper works by graphic artist Urs Fischer) allude to a second bilateral relation—art and state. But once again, the overall effect in bringing together the cultural and the political is that of neutrality, and beauty in form.