A Country of Cities: A Manifesto for an Urban America

Making a case for the benefits of investing in dense cities

This article, by Jose Luis Gabriel Cruz, originally appeared on ArchDaily as “A Country of Cities: A Manifesto for an Urban America.”

The Graduate School of Architecture, Planning and Preservation (GSAPP) hosted a highly attended event that welcomed respected academics and professionals from architecture and real estate to what the dean, Mark Wigley, warned might take the form a a celebrity roast. Vishaan Chakrabarti, a partner at SHoP Architects and director of the Center for Urban Real Estate at Columbia, was on deck to deliver an abridged, more “urban version” of a longer lecture on his new book, A Country of Cities: A Manifesto for an Urban America, a Metropolis Book. After the twenty minute lecture, an “A-list” panel of architects and historians, including Kenneth Frampton, Gwendolyn Wright, Bernard Tschumi, Laurie Hawkinson, and Reinhold Martin lined up to discuss Chakrabarti’s work.

His thesis is precisely what the title suggests; we as architects, developers, and planners must be leading a movement for a more urban America, a condition he equates to a better environment and economy leading to increased social-equity. Through a long-standing collaboration with big government and big business, citizens have  participated in a scenario he has dubbed, “The American Scheme,” or simply put, consumerism. As a result, millions of Americans have become indebted to houses, cars, and healthcare, conforming to an adulterated, and government subsidized, offshoot of the original “American Dream.” Chakrabarti claims the original dream had nothing to do with the ownership of a patch of lawn but of opportunity, quoting James Truslow Adams in 1931:

“…a dream of social order in which each man and each woman shall be able to attain the fullest stature of which they are innately capable, and be recognized by others for what they are, regardless of the fortuitous circumstances of birth or position.” 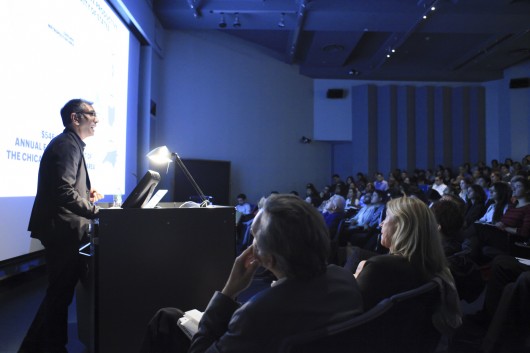 Vishaan Chakrabarti: A Country of Cities

The misinterpretation of this dream has led to an “ownership society,” resulting in dangerously attractive government incentives for citizens to easily afford the suburban lifestyle. That dream soon ended, however. In 2008, America’s outstanding mortgage debts peaked, accounting for nearly 80% of the country’s GDP, bursting what is now known as the housing bubble.

“This book is not anti-suburban,” says Chakrabarti, claiming people should be free to live a suburban lifestyle. “We simply should not be paying it through government subsidies.”

For an urbanite who needs no reminder of why cities out perform in every major grade – socially, environmentally, and economically – the value of his argument lies in his presentation. He contrasts the nation’s sprawling mortgage debts with the fact that 90 percent of our GDP and 86 percent of our jobs are generated on 3 percent of our land- mass, in metropolitan centers. Chicago, for instance, generates more economic development than 39 states across the country.

Through the compelling representation of statistics, Chakrabarti makes a concise case for the benefits of investing efforts in a development strategy that is based on dense cities. By identifying issues in modern infrastructures, current city planning policies, and paradigms within the design and construction fields, he paints a new urban landscape.

Read our book review of A Country of Cities here.