A Wall Installation that Breathes Life into Buffalo’s Ruins

Students at the University of Buffalo combined material technology and architectural thinking to create an innovative new way to structure metal.

Buffalo’s Silo City is a special haunt for architects, what with the grain silos and all. It’s also the site of a bubbling new architectural experiment. Trek through the ruins and wild grass, and you’ll stumble across a striking sight: a glittering metal wall that seems to have been zapped in from some sci-fi future. Seen against the robust mass-forms of the nearby grain elevators, the curving sculture appears impossibly thin. Further inspection, however, confirms your initial impression. How is this thing standing?

The project, 2XmT, as it became known, derives its innovative design from a perennial architectural problem: what is the connection between structure and skin? How to marry the two, while preserving the qualities of each? Such was the objective of a special studio developed at the University of Buffalo’s School of Architecture. Headed up by professors Nicholas Bruscia and Christopher Romano, the studio challenged students with using sheet materials vertically, without a linear framework, to prototype a series of self-standing architectural screens.

Bruscia and Romano enlisted the support of Buffalo’s Rigidized Metal—an effort that continues Department Chair Omar Kahn’s cooperation with local manufacturers, and an outreach that has led to new courses and research on materials from metals to terra cotta. With 2XmT, the instructors wanted to test the performativity of thin-gauge textured metals. Over the course of a year, the studio learned that by hardening metal and applying textures to it, that is, by “rigidizing” it, the material would grow in strength. “Perhaps most important to the research is the visibility of structural capacity through geometric texturing,” explains Romano. “Because the texture is embossed into the steel (thereby adjusting its molecular composition), the aesthetic result and the structural capacity are interrelated.” 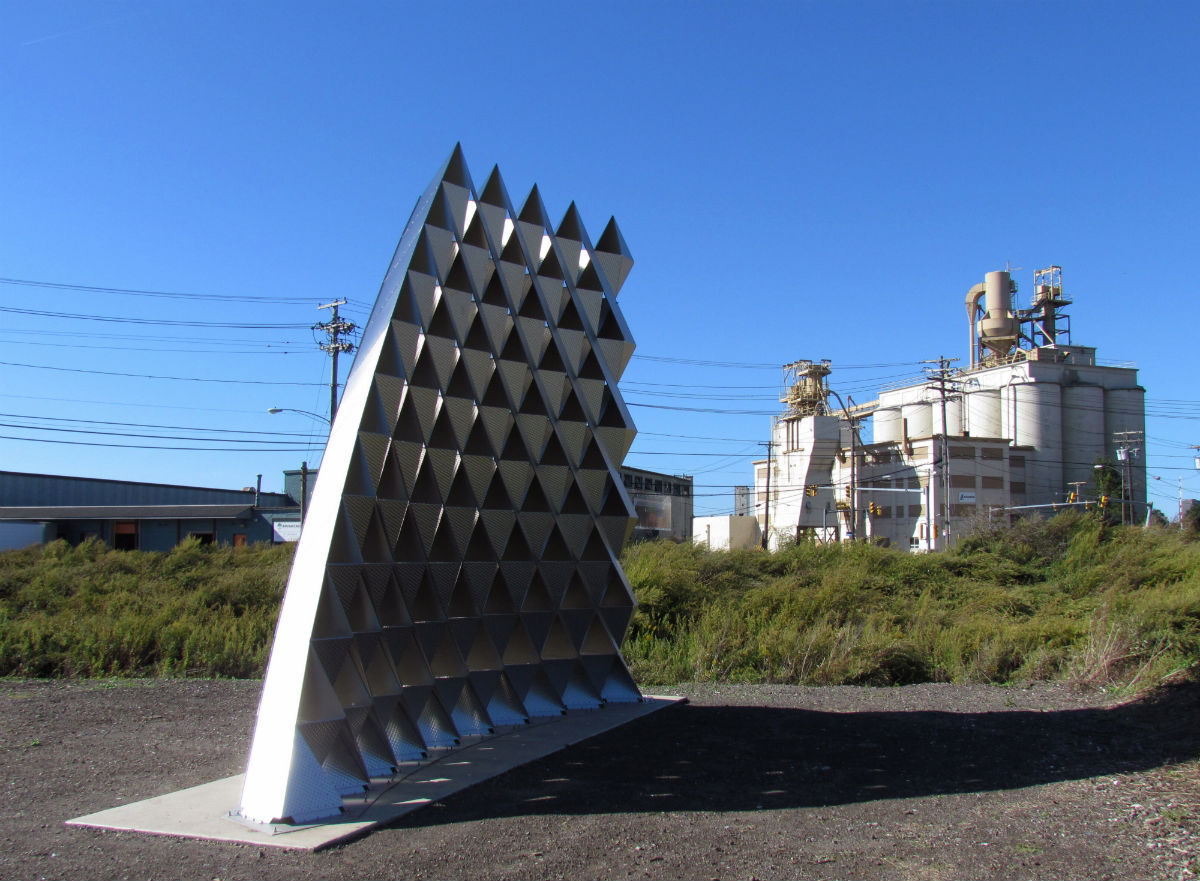 Daniel Vrana, one of the students working on the project, explained the development process: “We used carbon steel prototypes to work through structural issues at a small and controllable scope. The project then developed quite quickly through a process of scripting and paper modeling.” (Early prototypes were recycled as ideal targets for morning hockey target practice.) By mixing in complimentary textures, the students realized they could also vary the reflective qualities of the metal.

The textured sheet metal could then be folded to create modules, and thus, help stabilize the assemblage. Once the final form was determined, the slanted modules were assembled into a wall-like piece outside Rigidized Metals wharehouse, right at the edge of Silo City. There, the free-standing prototype was tested against Buffalo’s harsh winds while the team observed the nuanced reflections cast off by the metal. 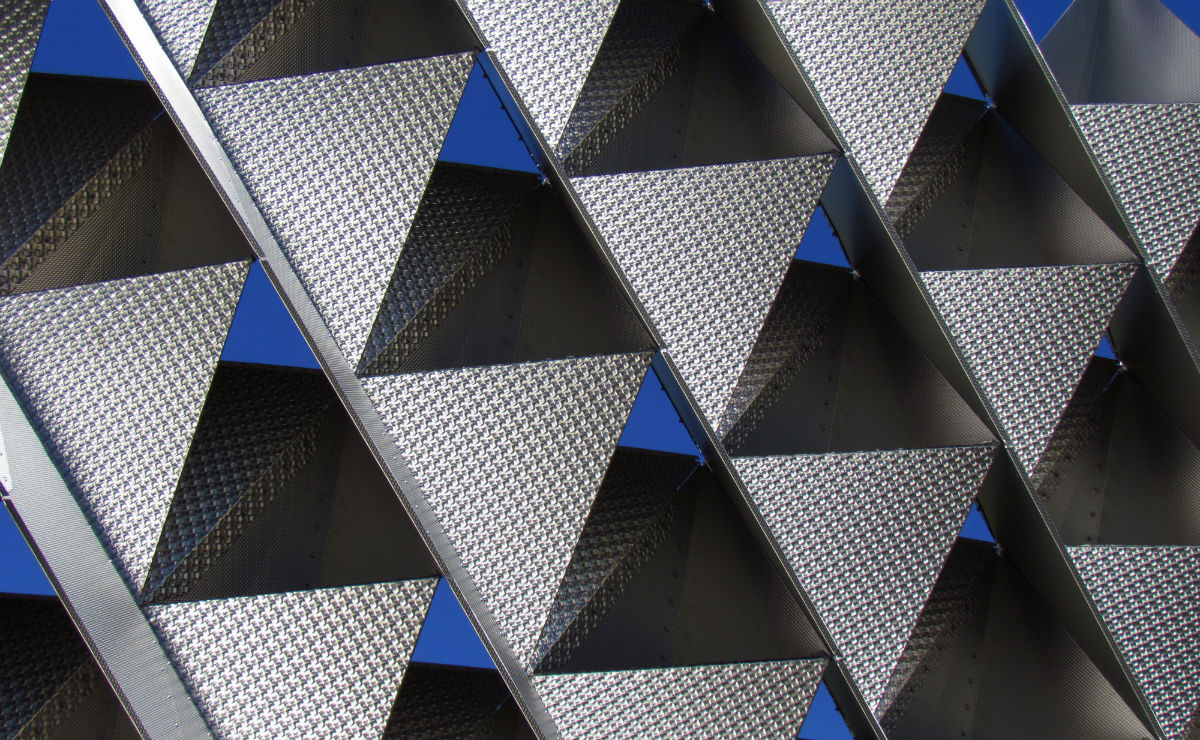 Rigidized Metals helped to facilitate the fabrication of the installation. A friend and long time supporter of the school and Rigidized CEO Rick Smith, speaks of the possibilities the research pointed to: “This structural façade represents true material innovation.” He was equally enthusiastic about the collaborative process, saying that, “There is immense value in the collaboration of well-guided creative energy and manufacturing know-how. We were all in sync, together as a team, pushing forward the material limits—it was like great jazz and one of the most exciting projects I have ever been involved with.”

For their part, both professors were very happy with the ongoing results of the process: “This was an example of a coming together of academia and industry,” says Bruscia. “This kind of knowledge share between designers and material experts allows academic research to move off-campus by incorporating real-world contingencies and, in the process, broadens the computational capabilities of the manufacturing facility with the hope of expanding the scope and marketability of their products.”

A second iteration of the project, 3xLP, was recently presented last week at Tex-Fab 5, the symposium organized by the digital fabrication alliance Tex-Fab and hosted at the University of Texas School of Architecture in Austin. There it was featured as part of the “Skin” competition exhibit, showing attendees that after all these years of dismissing Buffalo as in industrial has-been, there is still innovation coming from the heart of this rust-belt city.