Ahead of the Game: A Multi-Gen Recreation Center Prioritizes Wellness 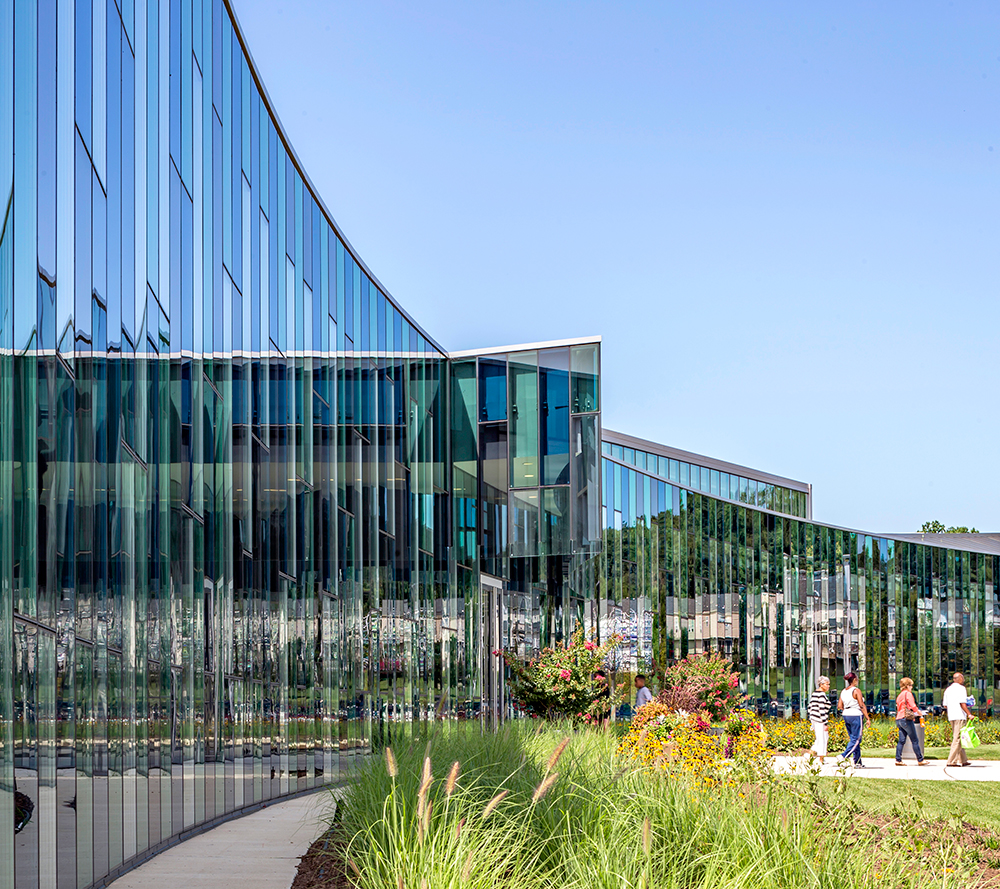 A national study found that low-income and nonwhite neighborhoods are half as likely to have recreational facilities. Sorg Architects’ complex hopes to buck this trend.

First Lady Michelle Obama’s Let’s Move! campaign might seem to have inspired the bold new recreation center in the suburb of Fort Washington, yet this public facility was conceived by residents years before wellness became part of the American Dream.

“There’s nothing like an idea whose time has come,” says Yvonne Johnson, architectural supervisor for the Maryland-National Capital Park and Planning Commission’s Parks and Recreation Department in Prince George’s County. “It’s synergy.”

Suman Sorg of Sorg Architects in Washington, D.C., designed the $15 million, 37,000-square-foot, LEED Silver–certiﬁed Southern Regional Technology and Recreation Complex, which opened in late June. A sweeping arc of glass establishes a signature image. Inside, a multicolor climbing wall and a workout zone with a clear view of the outdoors enliven an airy concourse. The centerpiece is a gymnasium with two basketball courts surrounded by an elevated walking track.

Community advocates not only anticipated the need to get active, they also tackled a second concern: how to provide youth with access to technology and equip them with tools for higher-paying jobs. “Lots of young people don’t get it,” says facility manager Glen Reynoso. “Playing basketball won’t cut it.”

Smart-wired classrooms and a science lab hint that STEM skills (science, technology, engineering, and math) can be entertaining, too. The facility has a $500,000 recording studio for rent to pros like vocalist Reesa Renee, but it’s also designed for novice sound engineers to hone their craft. Web design, animation, and video-editing courses are currently underway. It’s a heady program for a county ESPN calls a “hoops hotbed.” 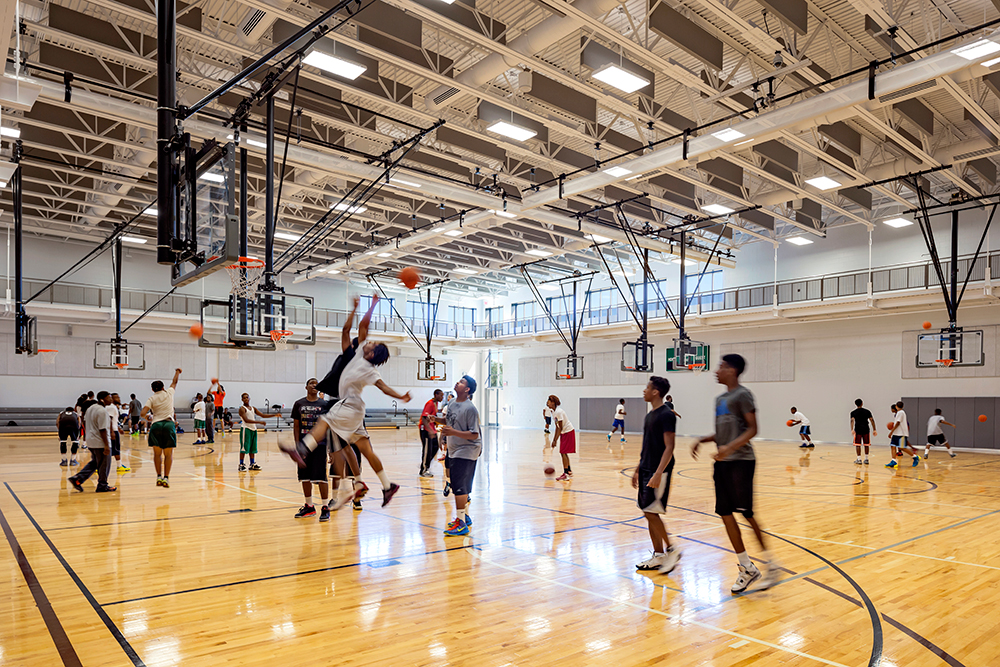 The complex was designed to create visual connections and encourage people to try new activities. The lobby opens directly into a climbing wall (below), which leads to the large indoor sports area.

Smoothing over the divide between scholarship and play fell to the architect. Sorg applied ample daylight, compelling angles, and cool metal screens. “The building is born from the desire to uncloak active functions, such as exercise and learning, which are ordinarily hidden from view in compartmentalized rooms,” Sorg says. “Creating visual connections may encourage people to try new programs.”

The project allowed Sorg, a modernist in the tradition of her mentor, Harry Weese, to depart from the blast-proof architecture of embassy compounds. The building’s long, low expanse appears to pay homage to the horizontal backdrop of woods that border the site. Sustainability features include a geothermal heat exchanger with 80 vertical wells 450 feet deep, and landscaping with native plants. On a patch of green roof, small plants reduce rainwater runoff, becoming fodder for environmental education. 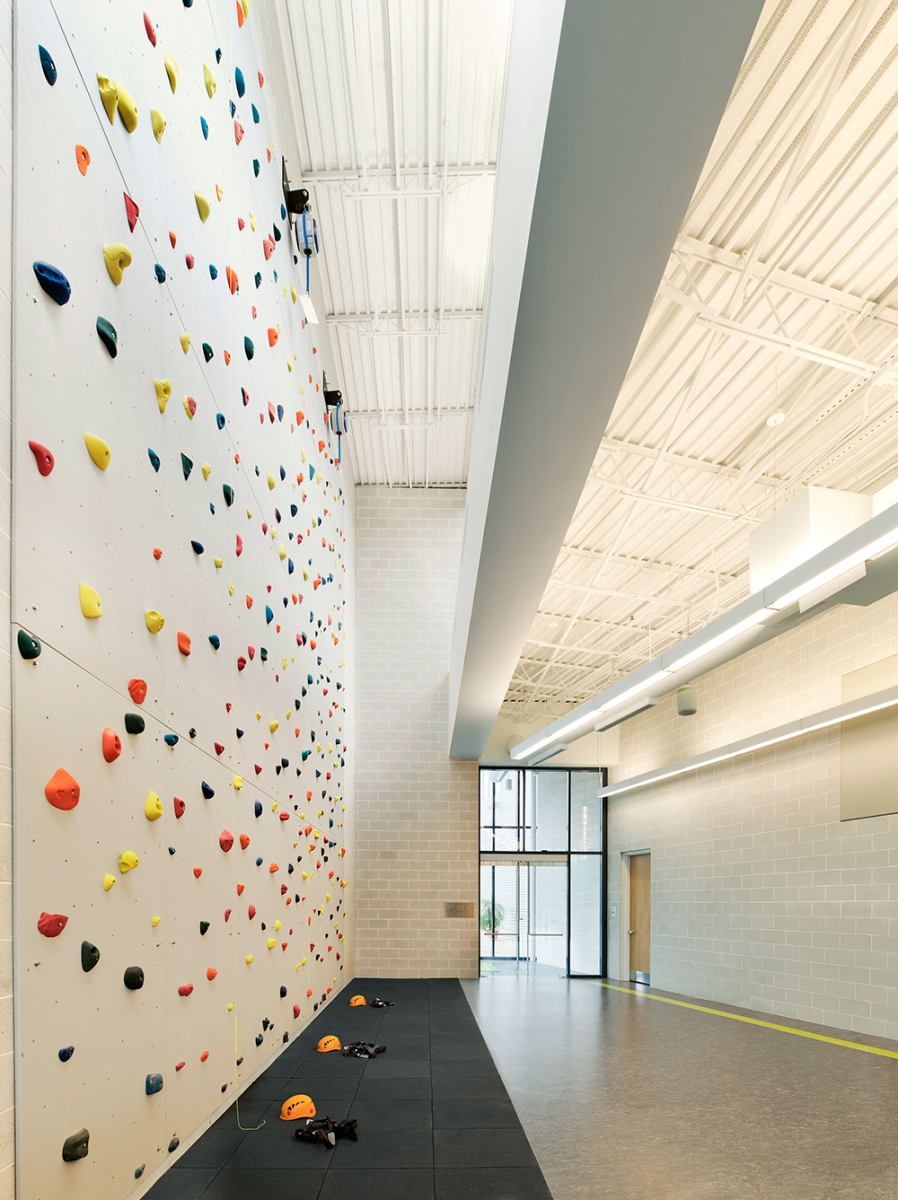 The climbing wall is one of the complex’s many recreational features. These are balanced by the center’s educational draws including smart-wired classrooms, a science lab, web-design and video courses, and a $500,000 recording studio.

Obama’s Let’s Move! campaign seeks to combat the obesity epidemic, which results in an estimated $147 billion in health-care costs annually. In Prince George’s County, 71.4 percent of the adult population tips the scale. Hopefully a well-designed recreation complex with the added carrot of a sound studio can alter such statistics.

On a weekday afternoon, the languid strains of Sade ﬁltered through the complex. A ﬁre ﬂickered in a lobby lounge, which Sorg calls a gesture “to a space that isn’t only about loud music and basketball.” Four courts were active. Three adults took laps. The “on air” light for the recording studio was off, but a sound engineer was on call.

Sorg and Johnson like to say the complex sets a standard for community facilities. In the workout zone, one ﬁtness buff pedaled earnestly while watching truTV. His T-shirt seemed to signal agreement. The message: “Experience the magic.”