A new exhibit celebrates the work of an overlooked name in American design history.

A new exhibit in Chicago celebrates the work of an often overlooked but important name in American design history—the Italian born, Chicago artist and designer Alfonso Iannelli. The show at Architech Gallery highlights the broad range of a prolific career.

Trained as a sculptor, Iannelli started his career creating promotional posters for theater before quickly becoming known for his striking, modern graphics. After working with Frank Lloyd Wright on the decorative sculptures for the famed Midway Gardens complex he went on to develop other ornamental designs for Chicago architects’ projects. At the same time he also developed a thriving career as an industrial designer of some classic, now highly collectible appliances.

The exhibit Alfonso Iannelli and Studios is curated and organized by David Jameson, director and owner of Architech Gallery, among the few commercial galleries that focus on architectural and design drawings. In business for over 15 years now, at the River North neighborhood, the gallery has become a unique and beloved Chicago spot for architecture fans, with an unsurpassed inventory of architectural treasures, from original prints by the renowned architectural photographer Hendrich Blessing to 18th-century Piranesi etchings and drawings by Viollet le Duc.

Jameson is considered today the foremost scholar on Iannelli. Shortly after he opened the gallery, he purchased the bulk of the existing Iannelli archives. It was from this collection and his book Alfonso Iannelli: Modern by Design (Top-Five-Books, 2013) that he developed the new exhibit. On display are samples of Iannelli’s industrial designs, like the Sunbeam C-20 “Coffeemaster” vacuum coffeemaker, plus several technical drawings, renderings, sketches, and theater posters.

Belated or not, the careful archiving of the materials, as manifested by the book and exhibit, assure Iannelli’s legacy, thanks to Jameson’s passionate dedication. Recently I caught up with Jameson to learn more about this remarkable designer and artist.

Paul Clemence:  What initially attracted you to Iannelli’s work?

David Jameson: I was the archivist for the Iannelli materials at Kelmscott Gallery and I thought the story told in those files was very compelling. Iannelli could design anything. I think it was equivalent to a Renaissance Studio plunked down in the 20th century. Where the 15th-century studio was a collaboration of several designers and artists producing church altarpieces and portraits, the Iannelli Studios of the 20th century also designed church altarpieces and stained glass windows but additionally decorated movie theaters, and designed Vaudeville posters, world’s fair pavilions and kitchen appliances. 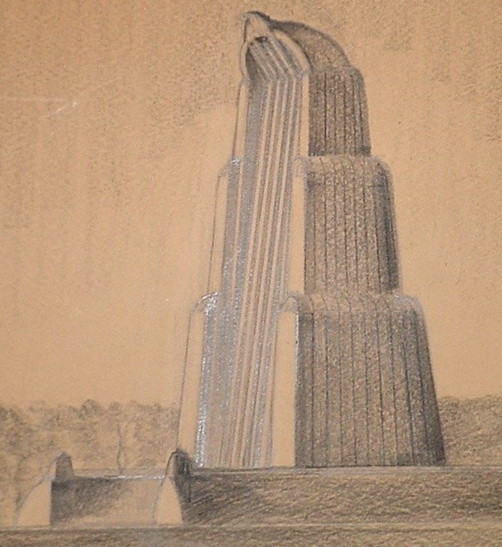 PC: He, of course, had a great start by pairing with Frank Lloyd Wright in 1914 at Midway Gardens project—with such beautiful results. Their shared modern sensibility was so promising and could have produced so much more, yet Midway Gardens turned out to be the only such collaboration. Why do you think that was the case?

DJ: Unlike an architecture office, the Iannelli Studios was more collaborative in its designing. This also explains why Iannelli and Wright never worked again after that project. Wright would never have credited anyone else. Iannelli did. After Midway gardens was completed, Wright never acknowledged Iannelli’s authorship of the sculptures, causing a riff between the two.

PC: Iannelli went on to work and develop other fruitful architectural collaborations. How did he go about these collaborations? How was that creative process?

DJ: Iannelli was unusual as an architectural sculptor in that he also “co-designed” buildings with a few important architects who normally didn’t collaborate with anyone else in the design process. Of course, anything put onto a building was certainly a design collaboration with an architect when Iannelli was employed as a sculptor for those buildings, but the actual formation of a building between the architect of record and a traditional sculptor was very rare. Speaking architecturally, it was like treating the entire building as a sculpture. 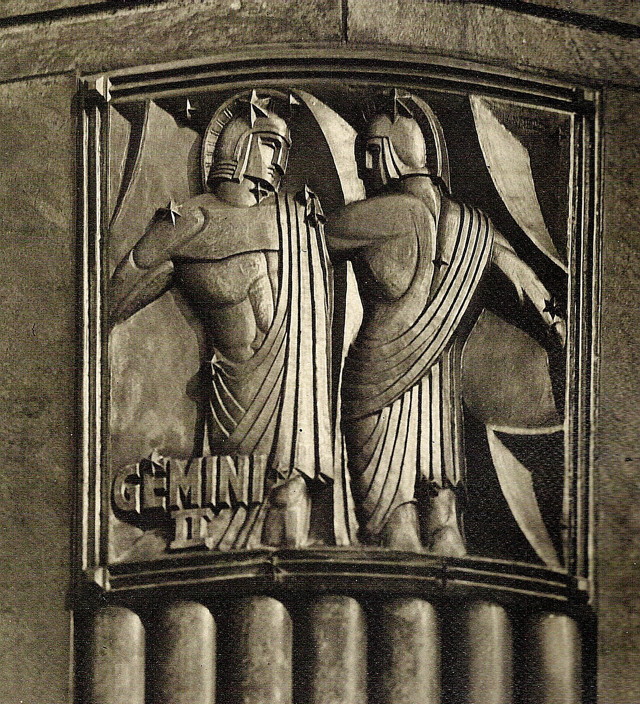 PC: What other architects did he collaborate with?

DJ: Barry Byrne, Bruce Goff, John Lloyd Wright, R. Harold Zook (with Zook and McCaughey), and briefly with Lloyd Wright ( Frank Lloyd Wright’s son). He worked as a sculptor to L.A.’s Irving Gill, Chicago’s  George Grant Elmslie (with Purcell and Elmslie) and Holabird & Roche, and Raymond Hood (with Hood and Foulihoux) for the 1933 World’s Fair in Chicago. With Bruce Goff he co-designed in 1933 the “Minimum House,” intended to use pre-formed concrete blocks with wiring and duct work as part of the manufacturing process. This was probably also meant to be a “convergence” of assembly line appliances with architecture. Unfortunately it was never built.

PC:  How did he get into doing designs for Sunbeam?

DJ: In 1926, Iannelli designed a Trademark for their boxes. We would call it a logo today. Because the Iannelli Studios were well known by manufacturing corporations, he worked off and on, beginning in 1935, with the Flexible Shaft Company; they re-named the company Sunbeam in 1946, presumably after the success of the Coffeemaster, designed by Iannelli in 1938. 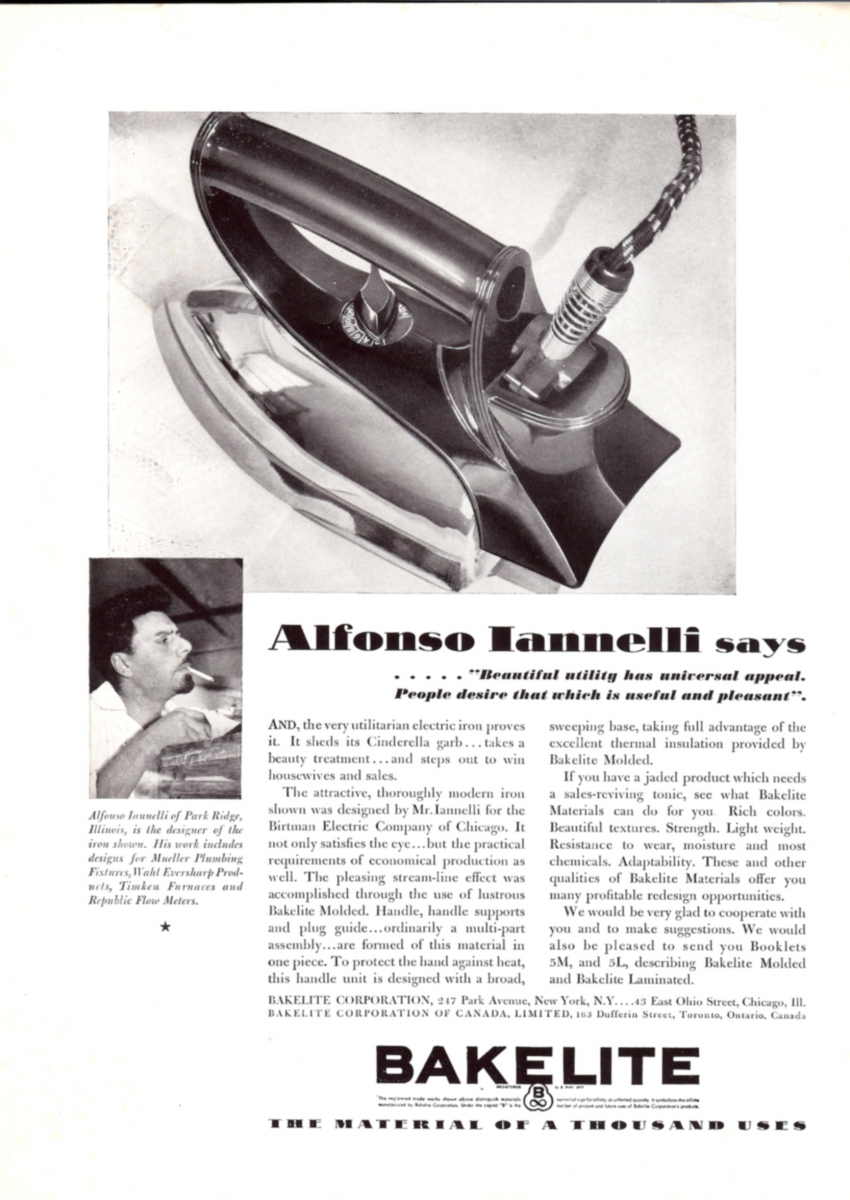 PC: He was working at a time when some major new landmark buildings going up in New York City. Did he do any work in New York?

DJ: None in the city itself but in 1948 he designed his son’s house in Croton-on-Hudson. He visited New York City frequently, though, and sketched set back skyscrapers and liked the futuristic drawings of Hugh Ferris. One of the letters he wrote mentioned the Brill Building on Broadway, so I imagined he thought the bronze relief sculpture was “swell.”