For a stunning cultural center in Japan, Chiaki Arai achieves the sublime material clarity of his legendary mentor, Louis Kahn. 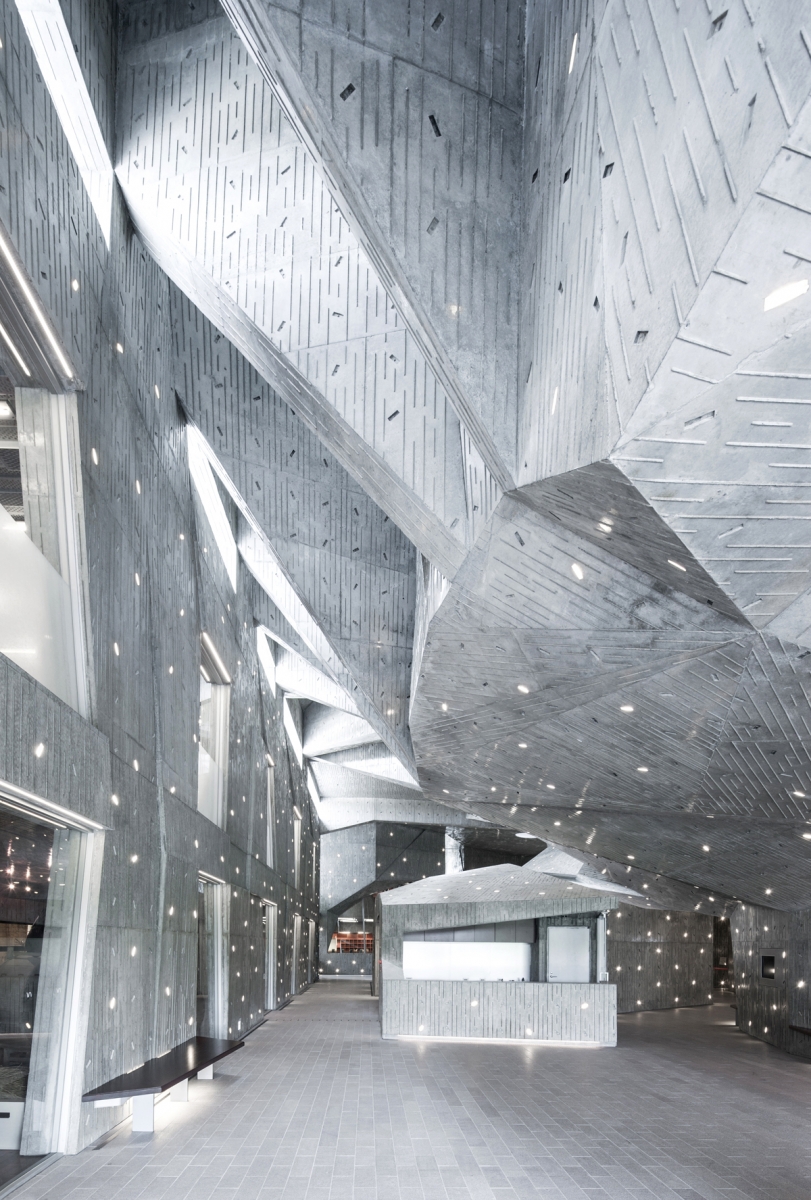 The interior of the Konan Ward Cultural Center was the result of a series of design workshops that Arai conducted in the community.

There is something distinctly Japanese about Chiaki Arai’s use of concrete on the Konan Ward Cultural Center, his most recent project—something that, for lack of a better reference, evokes the complex and difficult coexistence of rough and refined qualities found in Japanese ceramics. But, more than this, it goes back to the earth itself. From the outside, the building’s earth-hued base appears to emerge from the landscape, but it does so gently, modestly, even. With its regularized openings and evenly spaced windows, it could be just another unremarkable public building—until you walk inside.

The interior defines a sparkling universe of geologic intensity and cavernous, layered spaces all flowing around a multipurpose theater, library, local museum, and community center. An airy, light-filled interior “cross street” fluidly connects all these spaces, like a river running through a canyon. Here, nested and richly detailed structures seem to float and emerge from all sides, with sliding walls opening up the space.

When I ask Arai if wabi-sabi means anything to him, he says, “That would be a good word; it has that sense of nostalgic future.” After a moment of silence, he then says, “Iki is also a good word.” A term from Japanese aesthetics, iki is one of those words that can be translated only by combining many other contradictory words in English. It may be best described as simple sophistication or spontaneous unself-consciousness. Iki is anti-perfection. For context, Tadao Ando’s work would not be considered iki. Interestingly, Japanese literary critics have used the term in reference to Haruki Murakami’s writing and, if they visited Konan, they would probably agree that it is the closest spatial equivalent to Murakami’s storytelling.

Arai has cited the Death Star as an inspiration for Konan’s design.

“For me, it’s important that the concrete has a very light feeling,” Arai says. “Like wood—paper, even.” The process for achieving such a high level of expressiveness starts with modeling in 3-D software. The set of construction drawings, which runs up to a thousand sheets, contains many drawings specifically dedicated to communicating the concrete details to the builder. And while typical detail drawings show elements in 2-D plan, elevation, or section views, Arai’s drawings also show axonometric views to better communicate the design. This is one reason the design process can take up to three to four years. “Normally, in Japan, construction firms exert a high level of control over projects during the construction phase, but in this case we had the superior technique,” Arai says. Before construction begins, the builder is given the 3-D files to work with. “They had to hire someone young who knew how to operate the software,” the architect says. In addition, Arai’s office had two staff members on-site every week to monitor and advise during the construction process.

While the geometry of Konan seems futuristic—Arai has cited the Death Star as an inspiration—the details of the concrete and the craftsmanship that made them possible tell a more intimate story about local nostalgia and the power of place, suggesting the movement and imagery of the surrounding rice terraces. This is expressed through patterns of vertical lines cast in relief, interspersed with recessed blocks, dancing along diagonally. 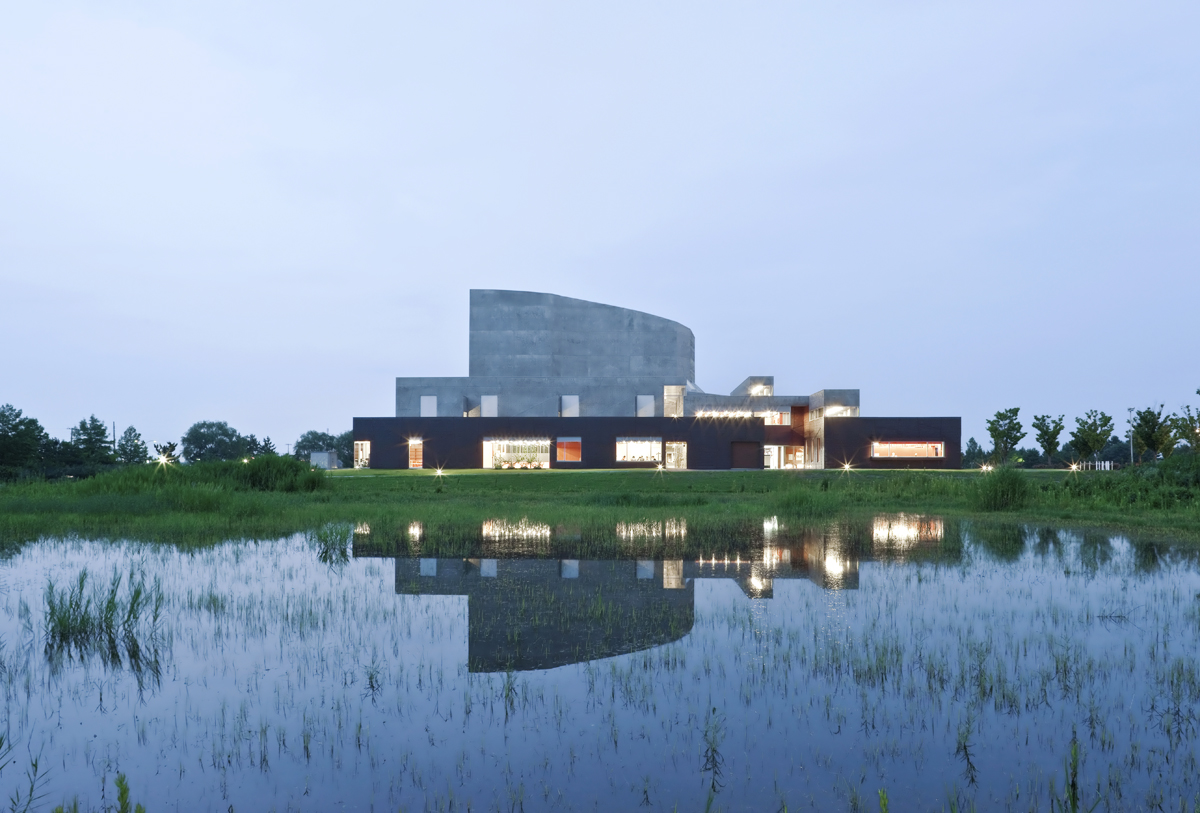 The south side of the building hints little at the spatial dynamics within. 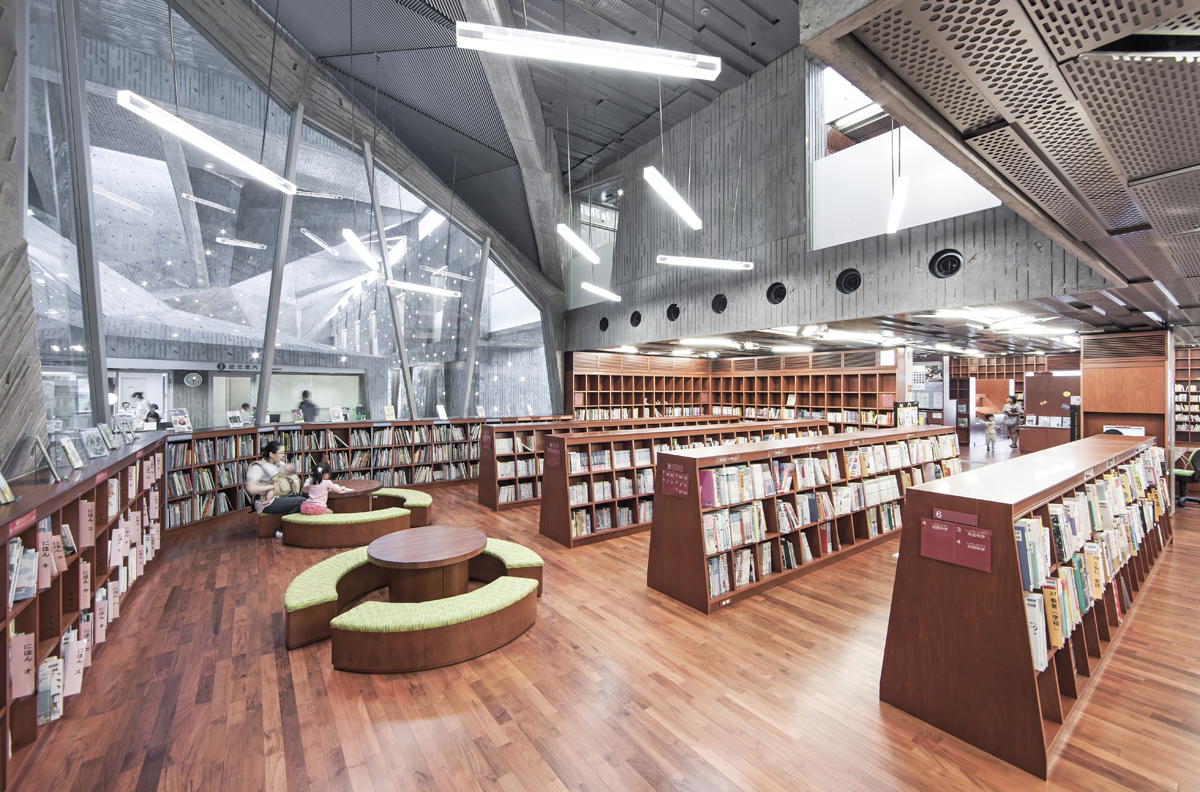 The library is expressed in warmer tones of wood to contrast its concrete shell.

The vertical patterning was made using CNC routing machines to cut grooves of different lengths into the many sheets of plywood used for the concrete formwork. The recessed block patterning was the result of strategically placing formwork supports, producing a contrasting pattern that appears to be sprinkled throughout. Thousands of inset LED lights complete the effect by making the interiors sparkle like sunlight striking a rice paddy. To achieve a more organic and natural look, the formwork for casting the shell of the building was divided into five standardized patterns. The plywood was patterned in a shop, then trucked to the site where it was cut and placed to fit the building’s triangulated geometries. “I wanted to design something interesting,” he  says. “Something beyond time.” 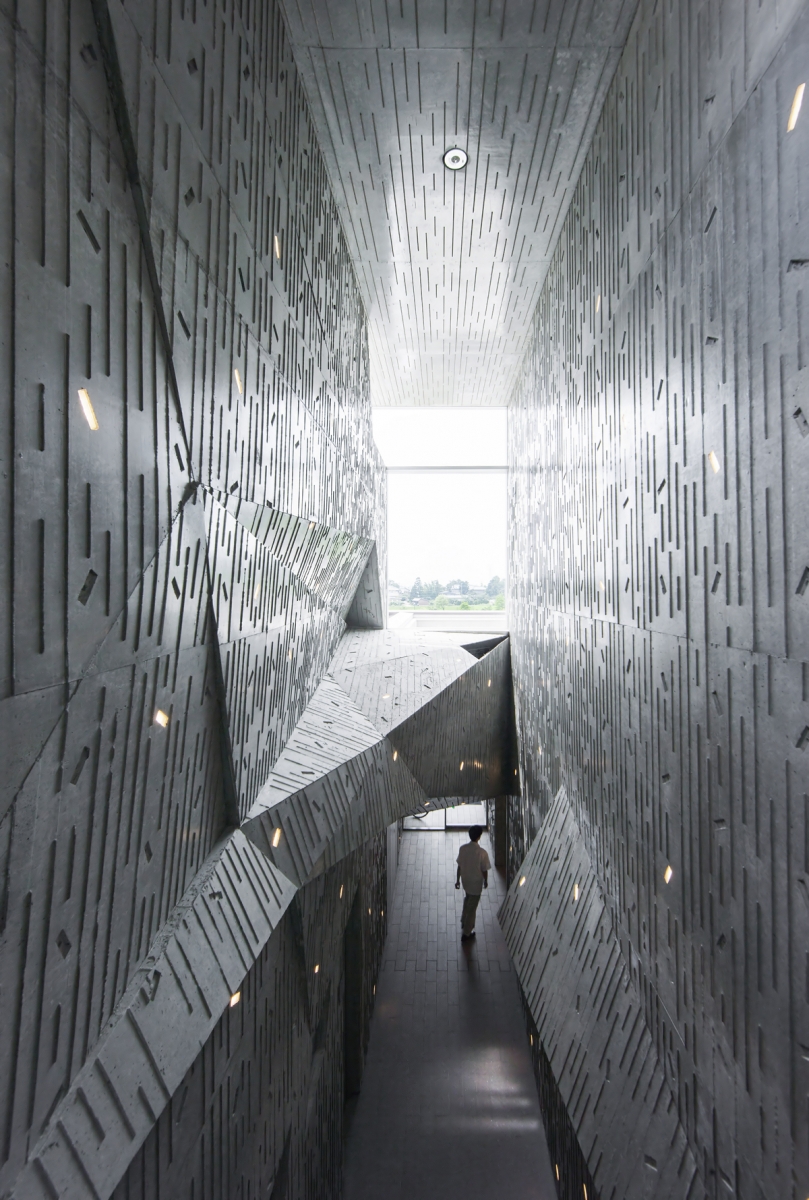 Throughout the “cross street,” patterned concrete, sparkling with LEDs, appears more like origami than a solid structure. Surrounding rice fields inspired the randomized lines and dots.

Ask Arai what his inspirations are and he will take you back to his days with Louis Kahn. In the early seventies, he studied under Kahn at the University of Pennsylvania and then worked in the architect’s office up until Kahn’s death in 1974. Arai worked on some of the master’s most storied projects such as Yale University’s Paul Mellon Centre and the FDR Memorial (completed just two years ago) on Roosevelt Island. After hours, the young Arai and Kahn would often talk into the evening. “We would talk about life and architecture,” Arai says. He cites Kahn not just as an influence on his use of concrete, but also for his conception of architecture as connected to local culture, rather than as arbitrary buildings that could be anywhere. Closer to home, he cites Kunio Maekawa’s most famous building, Tokyo Bunka Kaikan (1961), as an inspiration.

The precedents for Konan, however, are more personal, varied, and complex. There is no obvious linear progression from the young disciple of Kahn to the 65-year-old architect who seems to be just now hitting his stride with the idiosyncratic otherworldliness of Konan. There is, rather, an explosive leap, a violent interval between Arai’s early works, from when he first opened his office in 1980, to now. By his own account, the nineties was a period of increasing frustration with the type of work he was doing. “We did the renovation for the Yokohama Red Brick Warehouse, an important project, but not the sort of work I wanted to be doing,” he says. By 2000, stuck repeating the same modern designs for less adventurous clients, and on the verge of giving up the profession, Arai went on a pilgrimage to Los Angeles, where he visited Frank Gehry’s office. Gehry encouraged him to persevere. He also visited the New York offices of Norwegian firm Snøhetta. For Arai, both firms were challenging notions of what architecture could look like and what it could do. 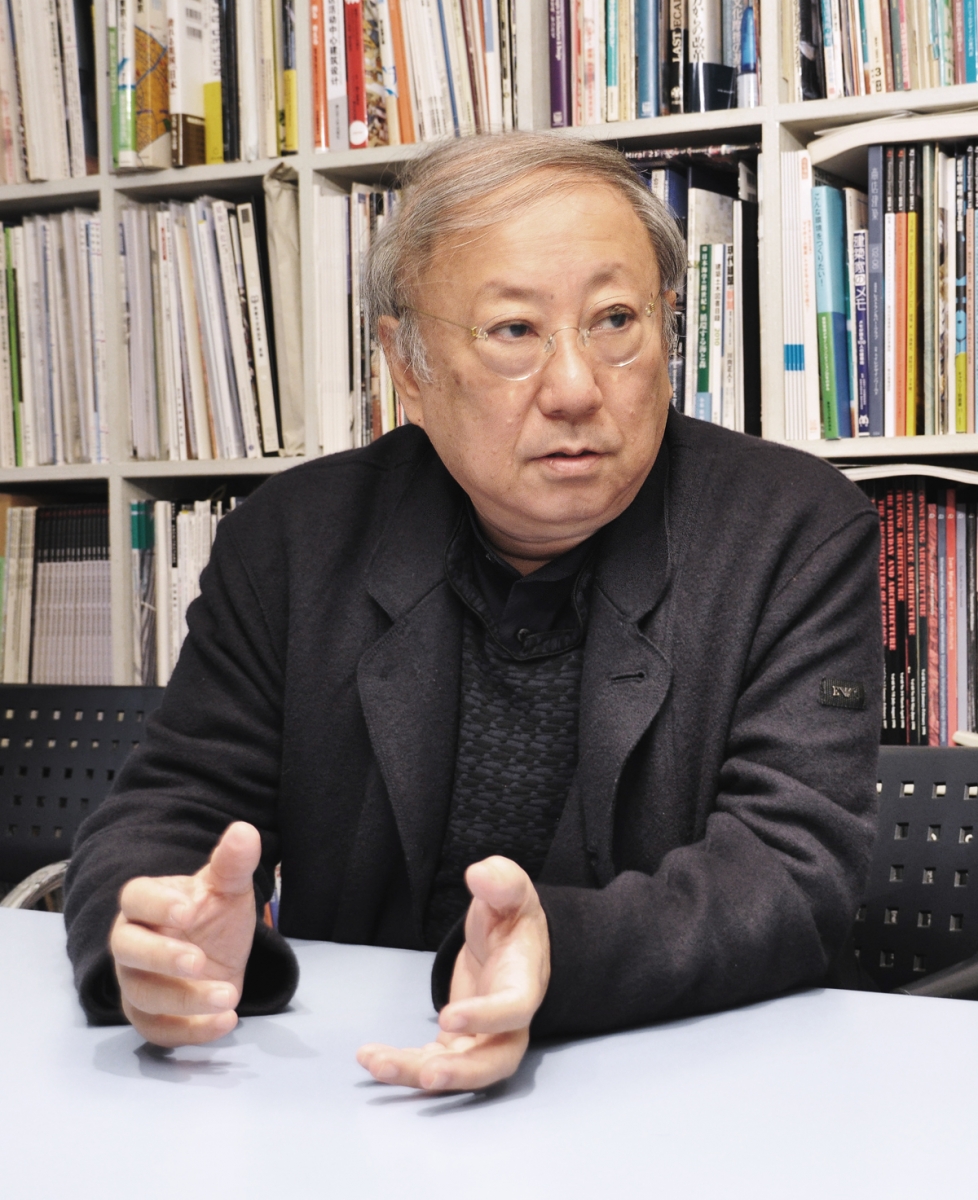 Arai has been quietly redefining public architecture in Japan for 30 years.

It was also during this period of searching that Arai completed his monograph, Chiaki Arai: Architecture for Arousal (l’Arca Edizioni, 2001). In it, he collects his earlier work, as if to shelve it away in the archives, while the introductory essay points in a new direction that would soon come to define a body of work, of which Konan is the latest example. “It is vital that we extricate ourselves from the standardization and homogenization of space carried out in the name of ‘modernization,’ by borrowing freely from the rich heritage of premodern spatial design,” he writes.

It wasn’t long after this that he won a competition to design the Ofunato Civic Cultural Center and Library in Iwate Prefecture, the project that would mark a dramatic departure from his earlier work. Spatially and formally, Ofunato—completed in 2008—marked the beginning of his now well-known expressiveness and nested, overlapping spacemaking. On the heels of this came Yurihonjo City Cultural Center, in Akita Prefecture.

So, to make sense of Konan, you have to know that it is the third act in a (so far) three-act drama. Alongside the first two acts, Ofunato and Yurihonjo, it represents a distinctive approach born out of crisis. The three projects—all in a sector more commonly dominated by powerful construction firms than visionary architects with radical ideas about space and materials—are evidence that Arai has been quietly and ever so slowly changing the face of public sector architecture in Japan

Arai cites Kahn not just as an influence on his use of concrete, but also for his conception of architecture as connected to local culture.

Arai likes using the terms “somaesthetics” (the perception of body and bodily sensations) and “topophilia” (the sense of identity of place) to talk about his work, describing his role as an architect more like that of an orchestra conductor than visionary auteur. These concepts are central to his practice and inform how he engages the local community throughout the life of a project.

This is what makes buildings like Konan possible. He conducts not just one or two community design workshops, but nearly 100, where he is able to get people to express what they would like to see in the design. The exchanges offer insight and feedback that then becomes rationalized into architectural space. “Initially, I show up with a simple box and then start to ask people about their ideas and desires for the center,” Arai says. “Though they may not think about design every day, when given the opportunity, people will express themselves.” From that input, Arai begins to warp and carve the box. “The strange shape actually comes from the people,” he laughs. “In this way people can say, ‘This part is mine’ and ‘See that shape over there? I made that.’ They feel a sense of ownership and pride and it becomes their building more than mine.” This type of community-engaged design is a kind of 1 + 1 = 3 effect. “Complex buildings have to have this type of synergy.”