An architect discusses how his firm is protecting buildings from future floods.

When Superstorm Sandy hit the East Coast in October 2012, it sent building owners, architects, and public officials in search of solutions to protect buildings from future flooding.  Soon after, FEMA raised the 100-year flood plain in Manhattan by approximately a foot, rendering most previously utilized measures no longer sound. Like many other design and engineering firms, we began helping owners of both existing and under-development properties with flood mitigation solutions immediately following the catastrophic storm.

We developed solutions that vary depending on the property type, design, and available architectural and engineering options dictated by the local zoning regulations. The upgrades also benefit the landlords by reducing the insurance costs and, in several cases of existing buildings, recovered New York City’s zoning Floor Area Ratio (FAR) credits by locating infrastructure above grade, in less valuable lower floor apartments. These credits allow for the construction of additional, more valuable rentable spaces on higher floors to recover the rentable area lost in new mechanical rooms.

A good example of a comprehensive approach is the 560 West 24th Street luxury condominium tower currently under construction in Manhattan’s trendy Highline/West Chelsea area. MADGI is the architect of record for developers Adam Gordon Holdings and Tavros Capital Partners, with the design architect Steven Harris Architects. The 11-story structure was in the early construction phase when Sandy struck the city. As things were calming down and getting back to normal, our project team set out to revise the design to incorporate solutions that would protect the residents and the property from similar disasters. 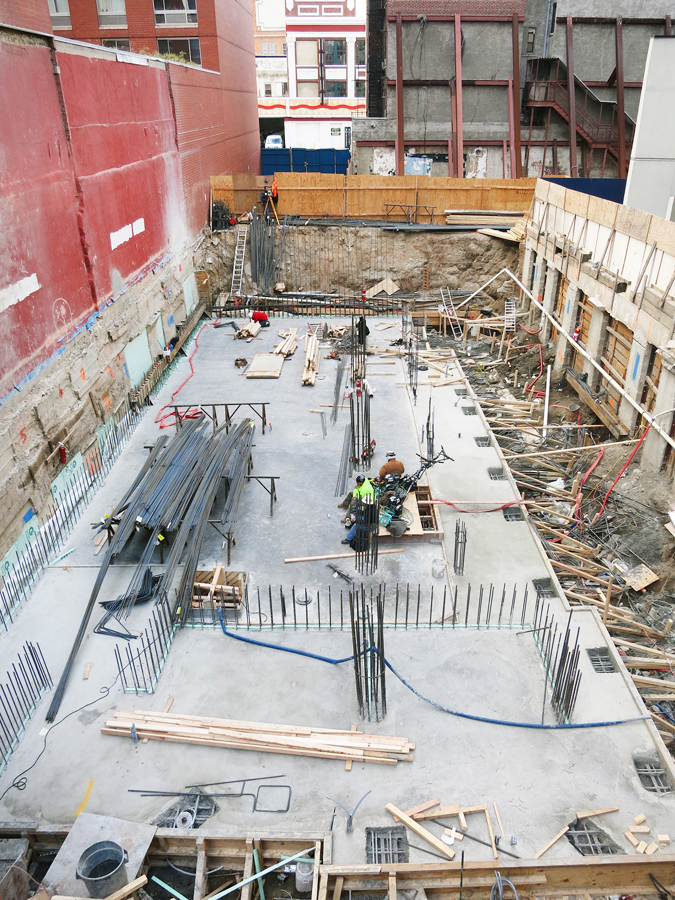 Flood mitigation solutions at the new 560 West 24th Street luxury condominium tower in Manhattan will include a 1,200-sq.-ft sealed cellar vault that will house crucial electrical and mechanical installations. The photo shows vertical steel reinforcement bars imbedded in the concrete foundation slab, which will support the waterproofed walls of the equipment vault.

Our first goal was to enhance flood protection for the entire property. The additional line of defense was to protect the utilities in case water enters the building. To achieve the first goal, we extended the foundation walls 12 feet above the ground level, about 11 feet above FEMA’s newly proposed flood mark. Resting on 87 piles socketed into the bedrock, the concrete, sealed “bathtub” foundation is designed to prevent any water penetration. This type of foundation was already specified for the building because underground water is present in this section of Manhattan. Following Sandy, we extended it much higher than originally specified. The foundation features 5,000 psi (“psi” stands for pound-force per square inch, a measure of concrete’s tensile strength) reinforced concrete with an external waterproofing membrane on the bottom and sides.

The 50-foot-long street-facing front of the structure incorporates two large storefront windows and four door openings to accommodate the ground floor commercial tenant and building entrances. The other three sides of the building feature solid concrete walls. Preventing water from entering the property through the openings was the next step in the flood mitigation design process. After analyzing different options available on the market, we recommended the FastLogs flood containment systems developed by Presray of Wassaic, New York. 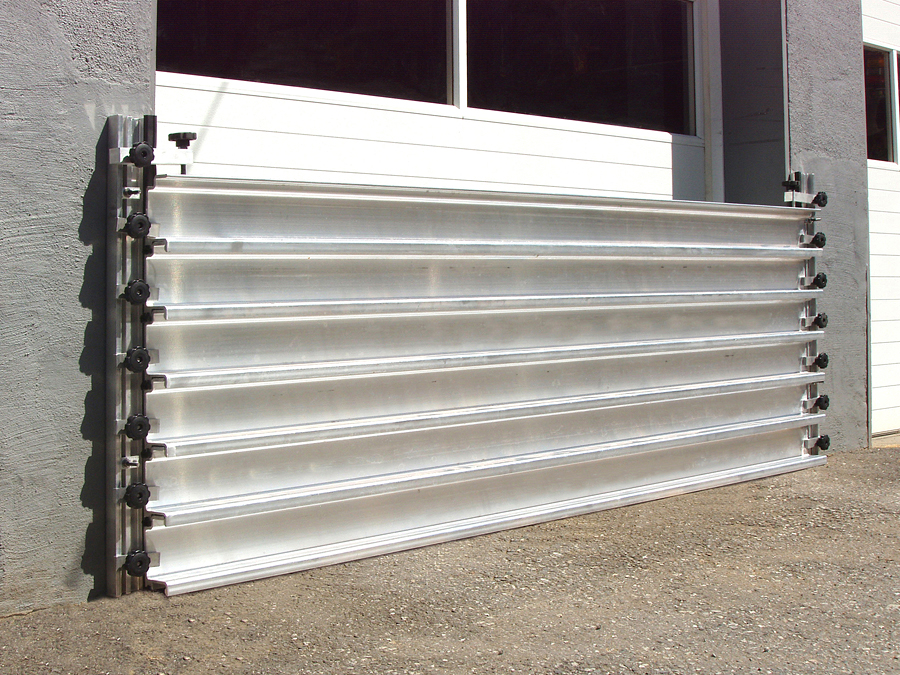 The FastLogs stackable flood barriers will protect both ground floor doors and windows of 560 West 24th Street. The system features stackable six-inch-high aluminum sections, which during flood emergencies can be quickly inserted into preinstalled steel jamb brackets on columns located on the sides of each door.  With the brackets imbedded in the walls, the system has a minimal impact on the building’s aesthetics.

The FastLogs stackable flood barriers will protect both doors and windows. The system features stackable “logs,” or six-inch-high aluminum sections which, during flood emergencies, can be quickly inserted into preinstalled steel angles (or channels) called jamb brackets, on columns located on the sides of each door. Neoprene compression seals prevent leakage between logs, wall jambs, and a floor surface with steel embedments. With the angles imbedded in the walls, the system has a minimal impact on the building’s aesthetics.

To add another level of protection, we custom designed a utility vault to be located in the building’s cellar. The six-sided concrete vault, a secondary containment element, will have two submarine-like bulkhead doors, large enough to meet the New York City Building Code’s egress requirements. The vault will house the crucial electrical and mechanical equipment. It will be connected to the building above through a sealed concrete column with an internal raiser, which will contain electrical wires and a ventilation shaft for the vault. It will terminate above the FEMA-specified flood level, sealing the critical equipment in a watertight concrete structure. The vault’s concrete walls and ceiling will be waterproofed with a sheet membrane. (The sealed bulkhead doors are manufactured by Walz & Krenzer Inc. of Oxford, Connecticut.) 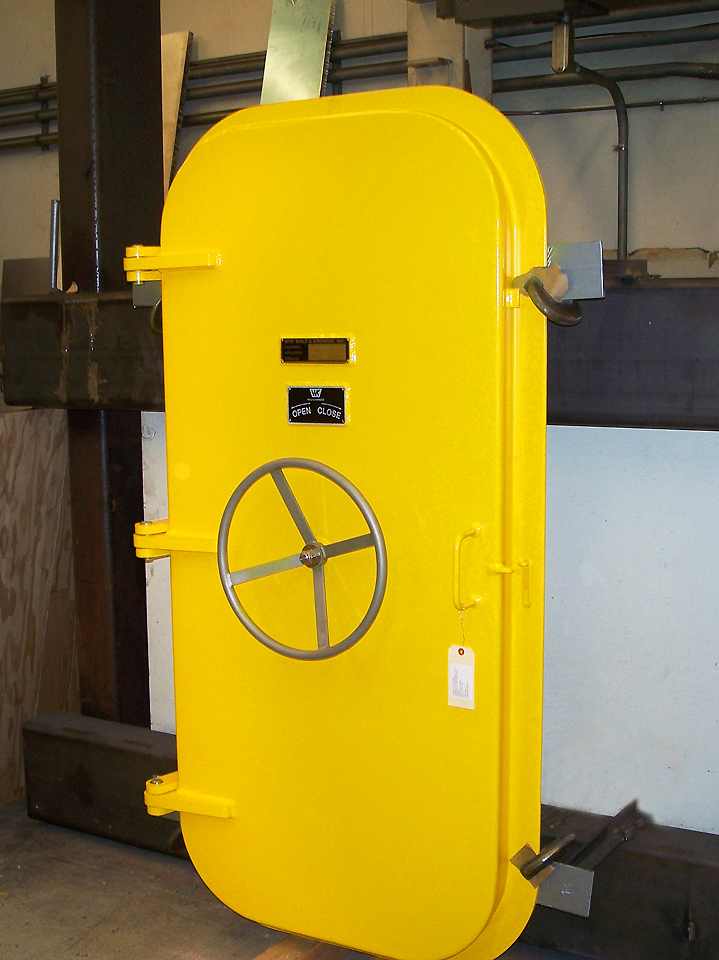 Sealed, submarine-like bulkhead doors will be installed in the waterproof utilities equipment vault located in the cellar of 560 West 24th Street.

To be safe, we added a fourth level of protection.  If the first three barriers fail, or the city’s power system goes off-line, the building will rely on its own power supply. It will include a 300Kv rooftop generator, powerful enough to sustain life-safety systems, hallway lights, and selected lights and electrical outlets in each residence.

In another example of emergency planning and flood mitigation, we are assisting an owner of an existing luxury residential building in the West Village. The property houses over 100 units and when it was flooded in the aftermath of Sandy, it lost all boilers and sustained damage to its electrical system. The owner reached out to us for assistance since we were already working on another project at the property.

Our architects analyzed the possible design and engineering options as well as zoning regulations. The review has resulted in flood mitigation solutions that protect the building’s infrastructure and allow the landlord to transfer the FAR credits, thus opening up an opportunity to expand the size of the building.  FAR, the ratio of a building’s total zoning allowed floor area to the area of its zoning lot, is the principal bulk regulation controlling the size of buildings in New York City. The area utilized by mechanical equipment, electrical installations, and other utilities is not included in FAR calculations.

Our team recommended relocating the boiler room and the electrical room from the cellar to two apartments located on the second floor, which typically generates lower rents. The loss of the rentable square footage included in FAR entitled the landlord to transfer residential space to another area of the building. Furthermore, while performing the review of the property, we discovered additional unclaimed FAR credits. The combined credits allowed the landlord to add a penthouse level to existing top floor apartments and thus expand the property and eventually increase revenues once the expansion is completed.

We recommended several other protective measures as well. These included an installation of a 300kV rooftop emergency generator. The building’s owner is currently implementing our upgrades and revisions to the building.