A current exhibition looks at the long and fascinating relationship between architecture and photography.

Since photography’s invention in 1839, it has played an integral role in representing architecture, quickly surpassing drawing as the preferred artistic medium for recording and representation. A new exhibition, In Focus: Architecture, on view until March 2, 2014 at the Getty Center in Los Angeles, traces the interdependent relationship between architecture and photography through a selection of 24 works from the museum’s permanent collection. “The idea for the show is to reveal how representations of architecture in photographs have evolved over time,” says Amanda Maddox, assistant curator at the museum, who selected the images for the show.  “The photographs tend to reﬂect what’s going on more broadly in the world.” We asked Maddox  to comment on a selection of works from the exhibition that demonstrate how architectural photography has grown from the documentary-style images of its early days, to the more experimental shots in recent times. 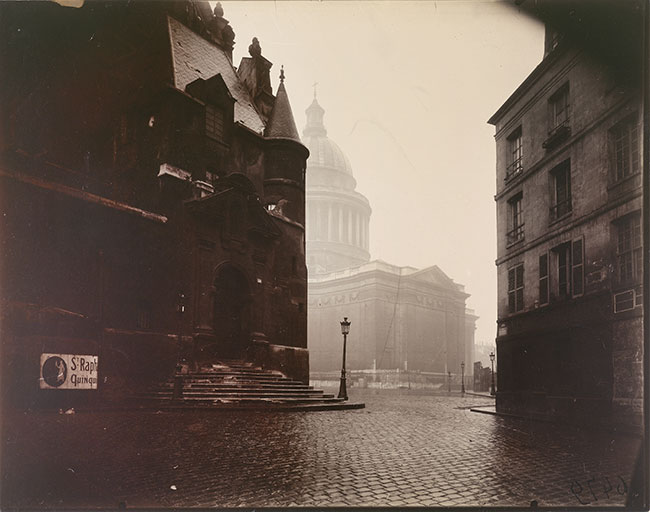 “The atmosphere and the ambiance of the scene he’s created evokes old Paris,” Maddox says, “even though it was made in 1924, in an area of Paris that had been modernized during the 1850s to accommodate trafﬁc.” Atget didn’t develop an interest in recording Parisian monuments, such as the Pantheón, until late in his career. 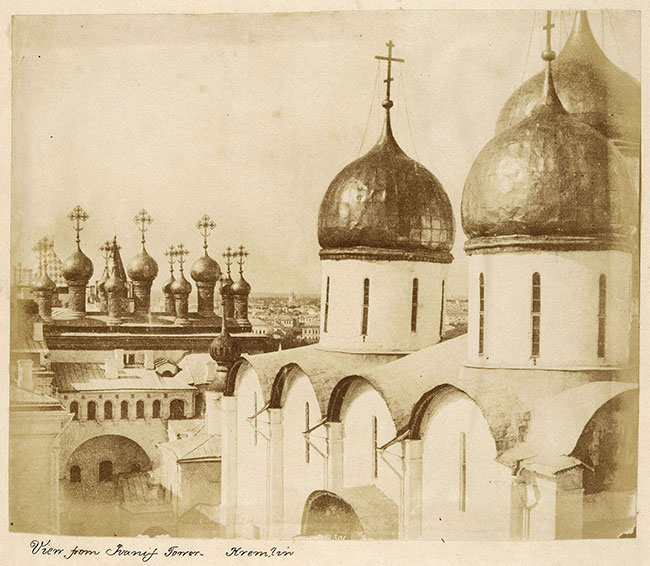 Fenton traveled to Russia early in his career to document the construction of a bridge for Czar Nicholas I. “Though an amateur photographer, Fenton displayed his talent for composition as you can see from his interesting perspective taken, probably, from atop the Cathedral of the Assumption,” Maddox says. “The photo came from an album of about 300 or so pictures that Fenton took during his trip.”

Kelmscott Manor: In the Attics (No. 1), Gloucestershire, England, 1896 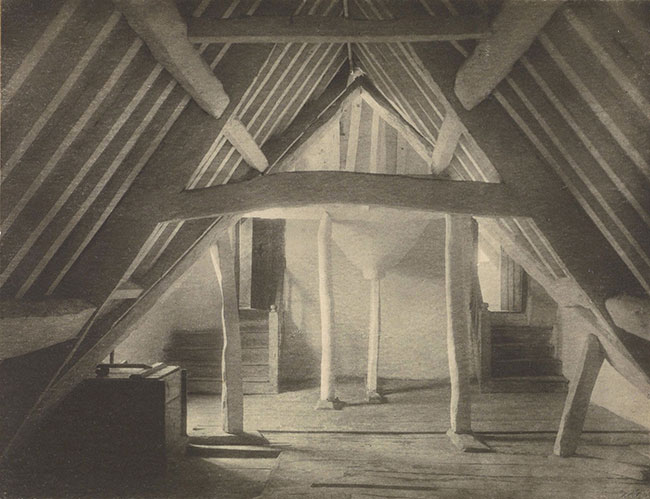 In 1896 Evans produced a series of photographs inside the summer home of William Morris, the leader of the Arts and Crafts movement. “This was made the year Morris died, so the photo has a sense of him—a ghostly presence,” says Maddox. “Evans uses light to set the atmospheric tone of the image. We also don’t see many photographs of architectural interiors from before the turn of the century, because of the difﬁculty of getting the light right on a print.” 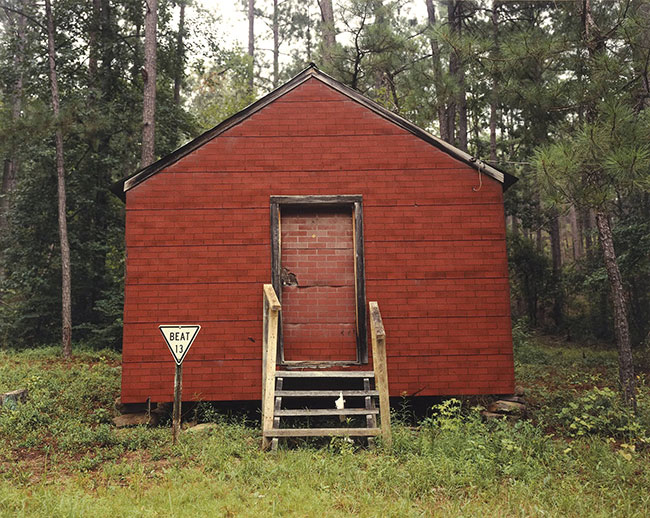 Christenberry has been photographing this wood structure in his native Alabama since the early 1970s. Since that time, he has made annual trips to document its facade. “He’s really chronicling the life and decay of this particular structure,” Maddox says. These vernacular buildings were not common as subjects, until photographers like Walker Evans, Ed Ruscha, and William Eggleston elevated their stature. 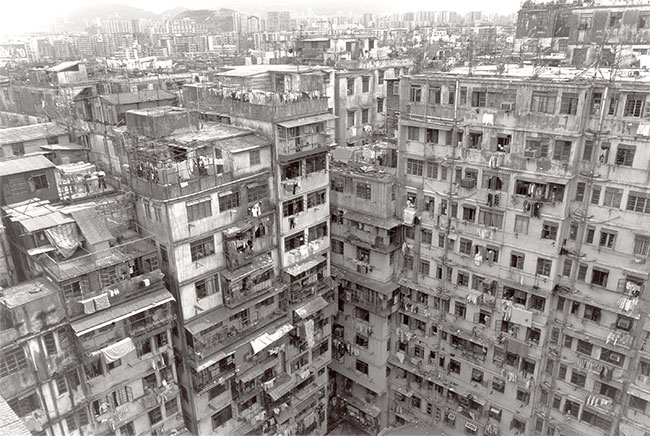 The Japanese photographer Miyamoto is best known for his photographs of buildings destroyed during the Kobe earthquake in the 1990s. This image was taken in Hong Kong prior to that event. “His elevated perspective from the tower is interesting because you can see the layers and rows of towers behind the towers that you’re immediately looking at,” Maddox says. 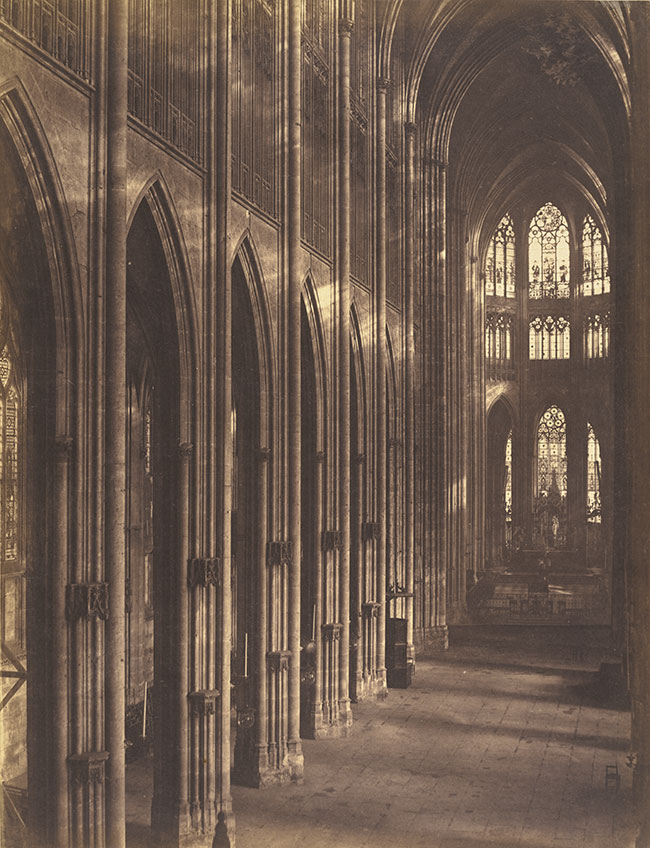 As technically gifted photographers, the Bisson brothers used large-scale glass-print negatives to create monumental images of buildings. “At that time, to photograph an interior would require a long exposure,” Maddox says. “This fantastic  print shows a very detailed interior scene of the entire nave of the church, perfectly rendered, with light pouring in from the skylight.”