BIG’s sports and arts expansion at a Copenhagen high school shows that academic spaces need not be the center of scholastic life. 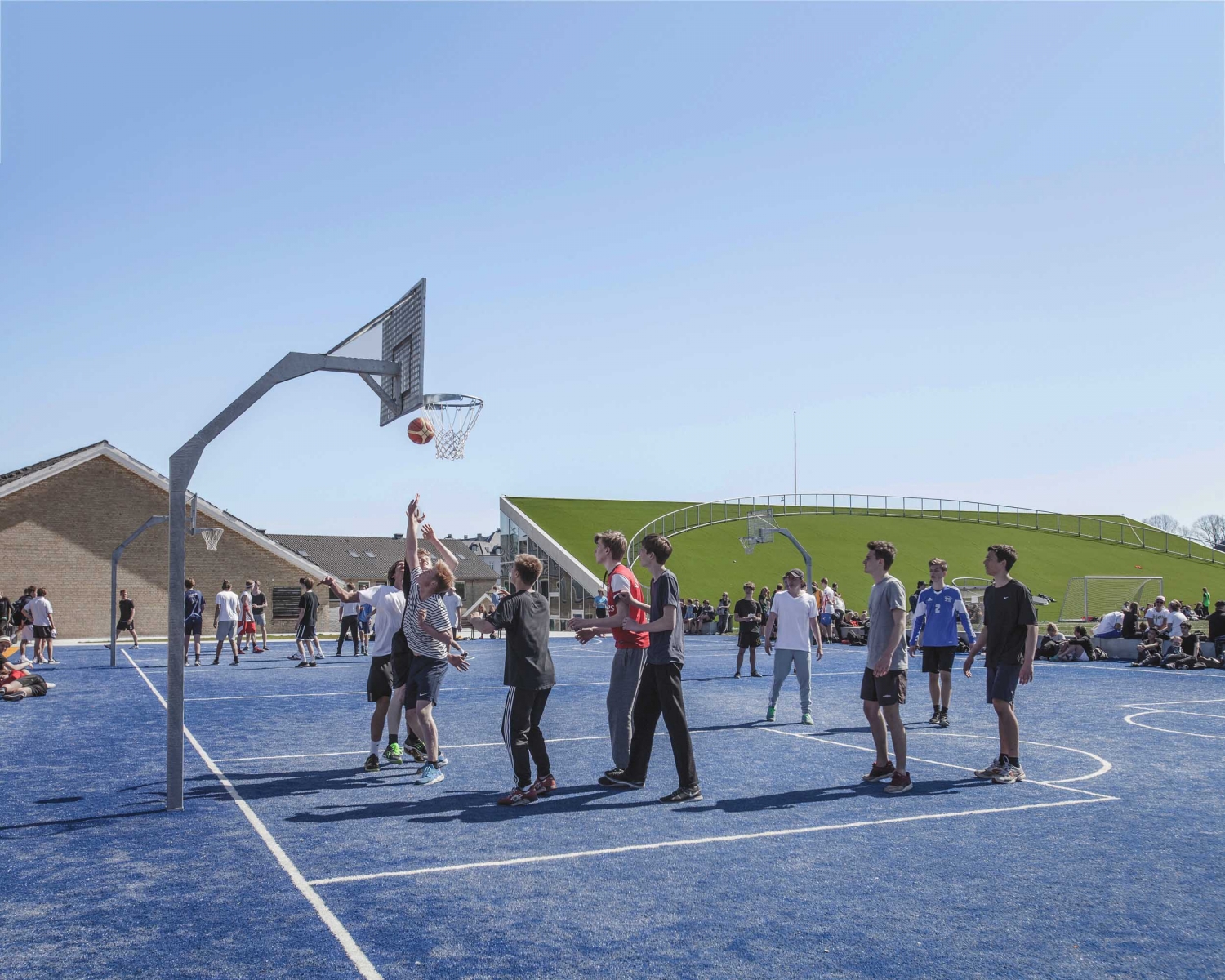 Sports and arts facilities, often assigned marginal spaces and used only by high schoolers interested in those activities, have been reintegrated as shared areas at Gammel Hellerup School.

About four years ago, Bjarke Ingels got a call from his high school math teacher. Jørgen Rasmussen worked at the Gammel Hellerup School, north of Copenhagen, from which Ingels—founding partner at BIG-Bjarke Ingels Group—had graduated in 1993. Rasmussen, now the school’s principal, asked his former student if he could help with a master plan that would breathe new life into the densely packed 1950s campus. The first order of business was building a multiuse sports hall. The second was finding a place for it.

“Most people think about creating a building from the ground up,” says Kai-Uwe Bergmann, partner for business development and communications at BIG. “But the school has a single courtyard, and playing fields, both of which are sacred. Space is extremely limited. Our solution was to bury the sports hall.”

The sports hall provided a new entrance to the campus—suggesting that academic spaces need not be the center of school life.

In aerial photographs, the sports hall looks like a pregnant bump in the school courtyard. From ground level, the roof of the sunken sports hall feels like a surging wave, transforming one of the campus’s few open spaces into an intriguing meeting spot where students perched to watch their schoolmates graduate in 2013, the year the hall was completed. The facility’s main volume, a broad handball court, is set 16.4 feet beneath the ground, shaped with white cast-concrete walls. A bowed ceiling—its slope determined by the mathematical formula describing the parabola a thrown handball follows—hovers above it, its prefabricated wooden beams seemingly held aloft by natural light filtering through its periphery. Perhaps most significantly, the sports hall provided a new entrance to the entire campus—suggesting that academic spaces need not be the center of school life.

But BIG and Ingels weren’t done. In 2015, the firm finished the school’s arts building. Above ground, the arts and culture center forms a continuum with the outdoor athletic facility; AstroTurf from the soccer fields drapes over the 15,069-square-foot hall’s slanted roof, creating a carpeted grandstand where fans can watch games. The new building also connects with the sports hall underground. Students leave the subterranean handball court and enter the arts hall, where the material scheme of concrete walls and wooden ceiling beams is inverted as they climb the stairs. “We’re not afraid of going underground,” explains Bergmann. “It’s part of the DNA of being Danish. You learn to make a lot out of very little.”

The BIG interventions have made Gammel Hellerup more popular; applications to the public school have increased by more than 30 percent. “Their introduction into the mix has completely reconfigured the sum of the parts,” Ingels says. “Like a catalyst or an enzyme, once inserted, all the surrounding substance trans- forms into something completely new.” 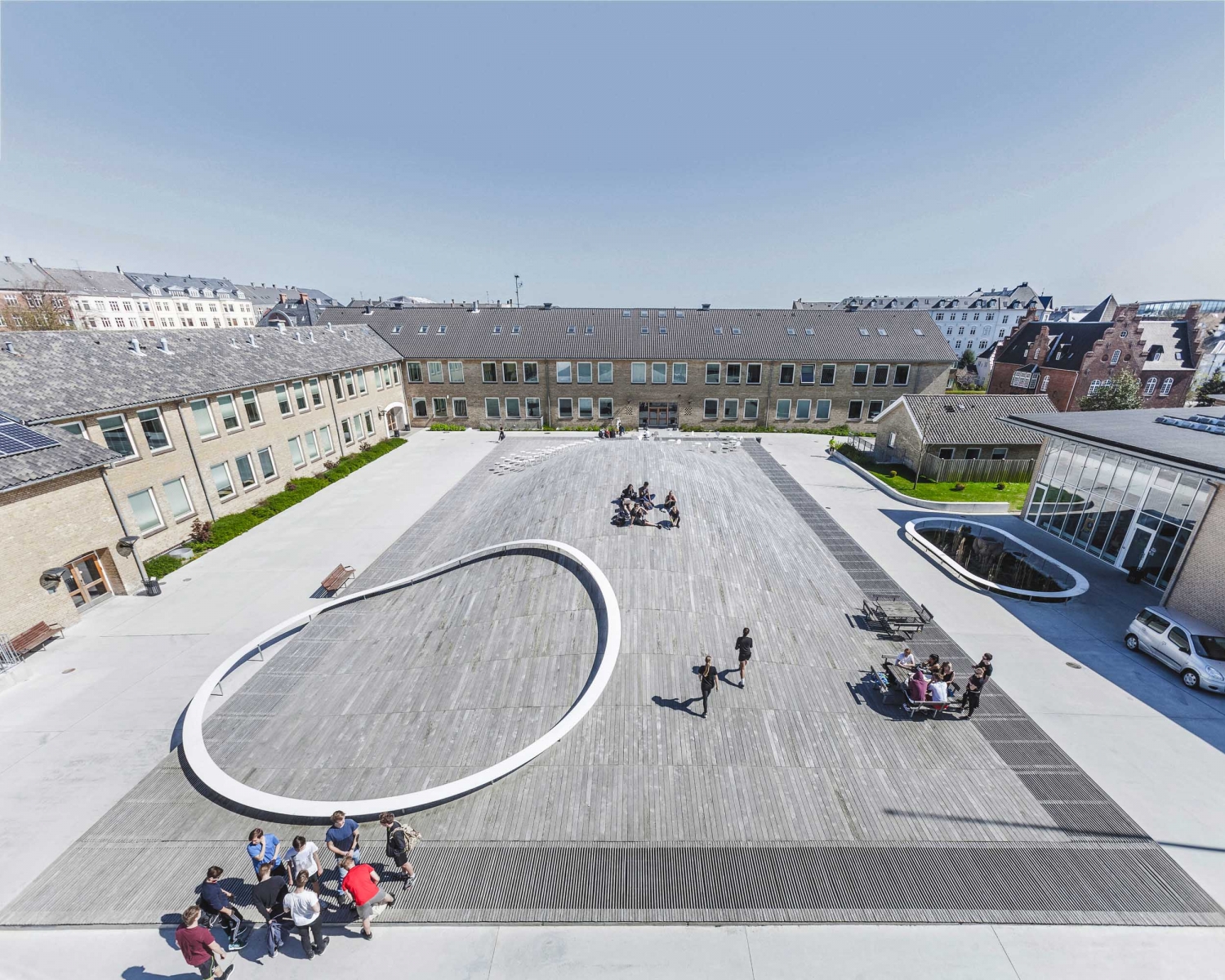 The school’s shared, social spaces include the roof of the underground sports hall (above) and a raised extension to the sports field (below), which provides a grassy seating area on top and has the entrance to the new arts facility tucked under it. 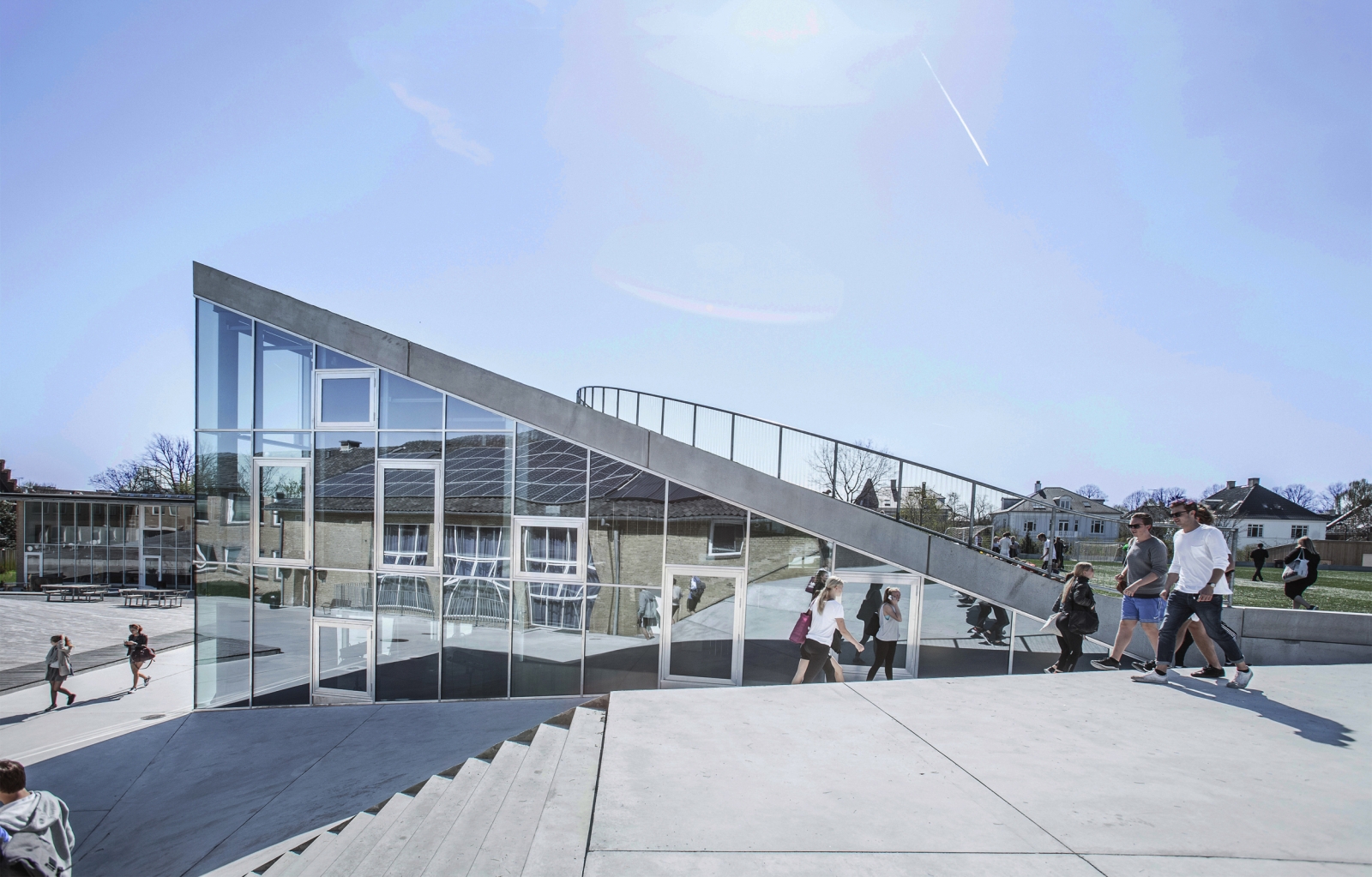 The glass facade of the arts building faces the hump of the underground sports hall. 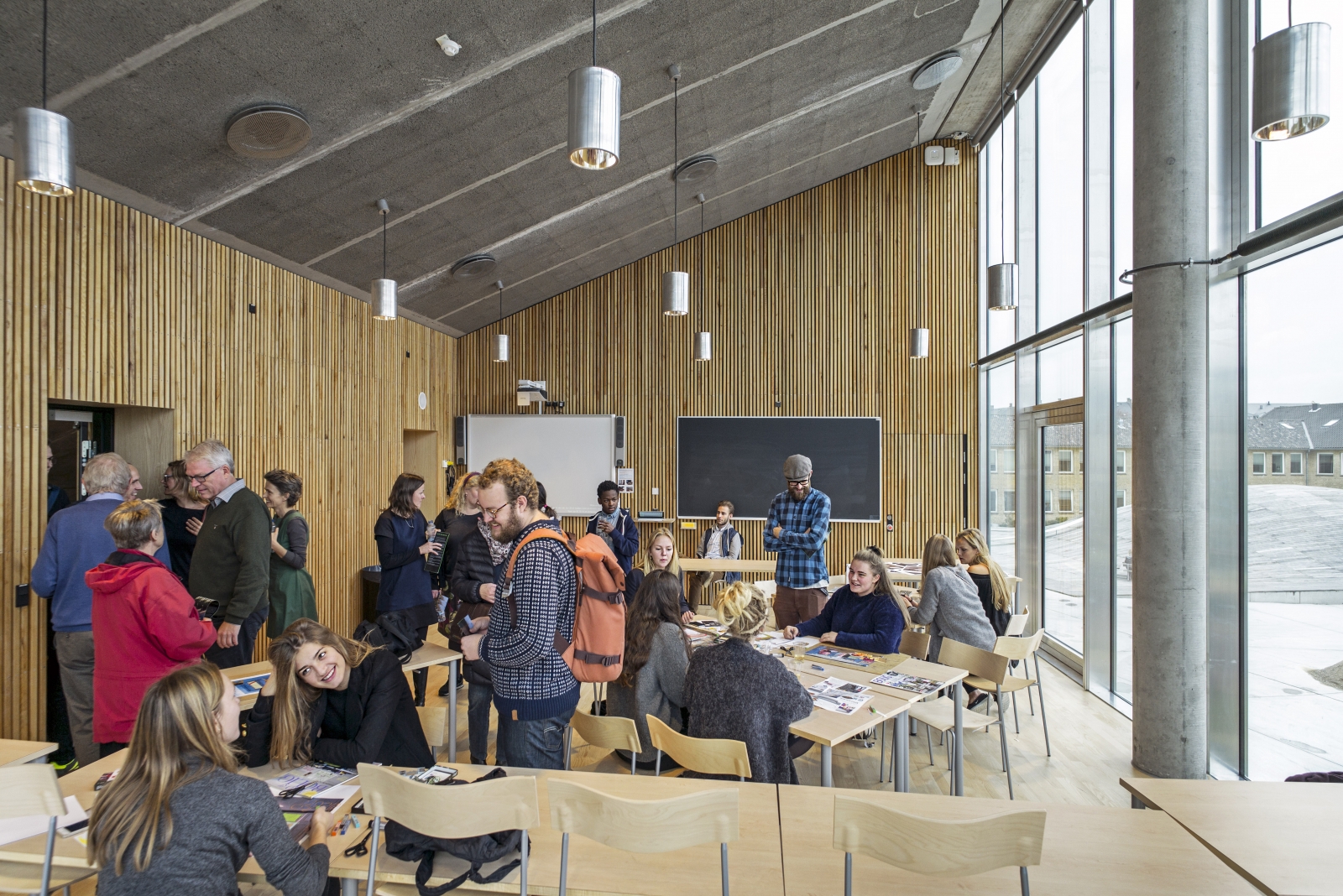 Inside are warm concrete-and-wood spaces, which thread together the academic, arts, and sports sections of the school, suggesting a holistic approach to education. 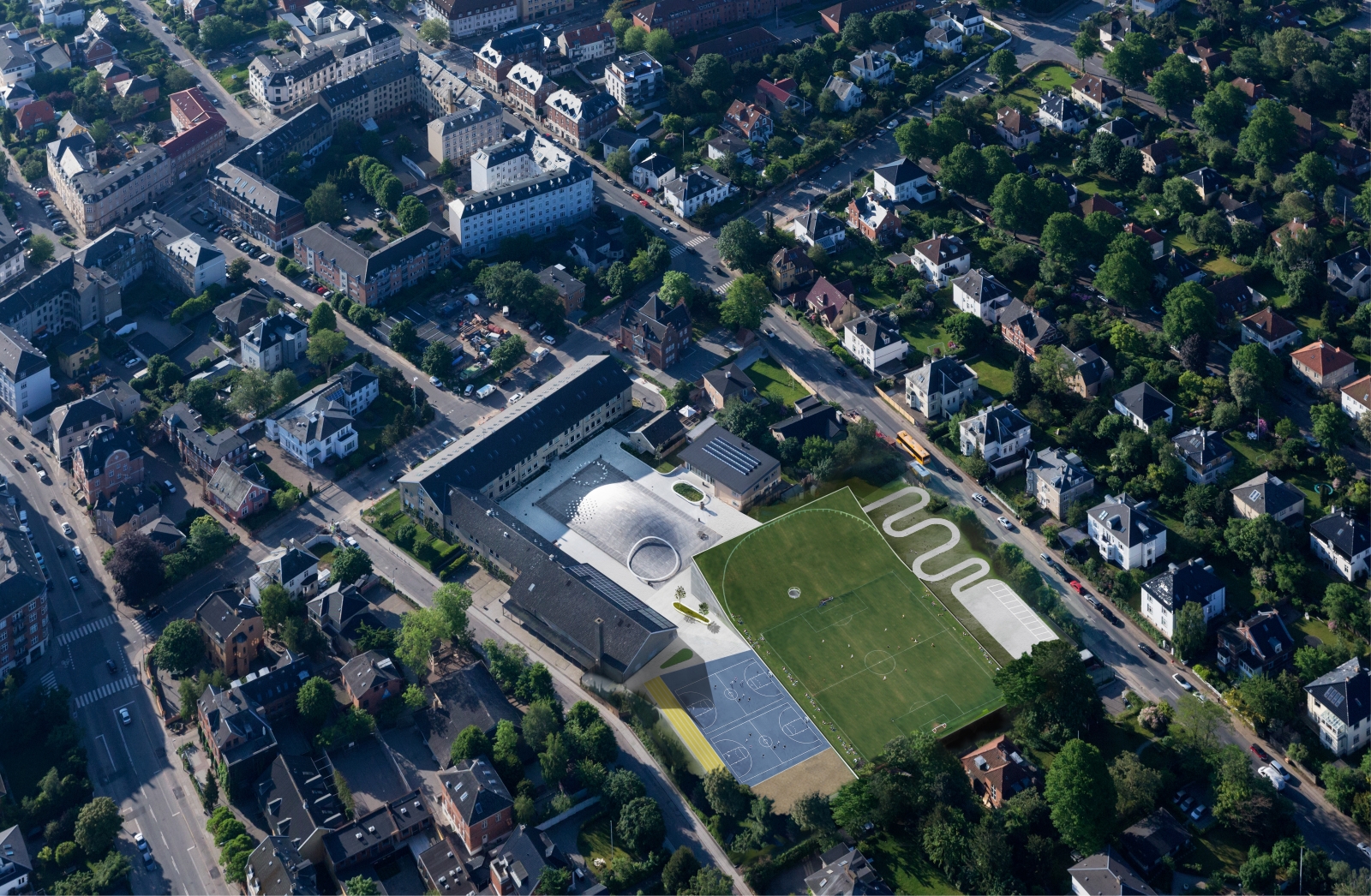 An aerial view of the Gammel Hellerup campus shows BIG’s dual interventions and the great significance the curriculum places on play and sport.