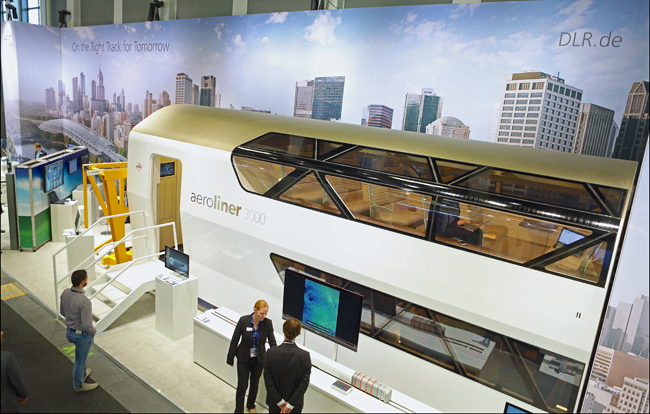 For more than 150 years, trains have been a safe and sustainable means of mass transportation—fast, impervious to traffic jams, and giving passengers direct access to city centers. A new concept unveiled at InnoTrans 2016 might give trains another advantage—speed without additional infrastructural costs.

Munich-based Swiss architect Andreas Vogler of Andreas Vogler Studio and engineers at the German Aerospace Center (DLR) presented a 29-foot-long, full-scale mock-up of a potentially groundbreaking concept for British rail: a double-decker high-speed train called the AeroLiner3000. In the past decade, global demand for rail equipment, infrastructure, and services has grown by 26 percent, so it’s no surprise that international investment in high-speed rail is speeding up, but what the AeroLiner3000 demonstrates is the enormous value—beyond monetary savings and happy commuters—of investing design efforts there, too.

British rail faces big infrastructural hurdles today. The system has severely restricted loading gauges that limit the maximum height and width for railway vehicles. But in the past 20 years, the number of U.K. riders has doubled, and it is expected to double again in 25 years. Vogler says the new train could increase the U.K.’s train seating capacity by 30 percent—without any changes to the country’s infrastructure.

The DLR engineers and Vogler applied blue-sky thinking to the track-bound train, tapping into aerospace design for ideas about lightweight construction, mecha-tronics, energy consumption, aerodynamics, and ability to provide ample comfort in constricted spaces. First, they gave the 3000 a honeycomb construction, making it lighter than conventional coaches by 20 percent, which means more seats, greater efficiency, larger windows, and decreased CO2 emissions, as well as lower operating and maintenance costs. They reduced air resistance and noise with an aerodynamic nose, fully clad wheel sets, and a sleek underbody.

“We designed the train as if it were an airliner,” Vogler says. “We didn’t want interiors with uninspiring or bizarre color schemes and wild patterns on seats and carpets that are, unfortunately, often found in public transport.” Trains are typically ventilated from the floor or window upward, and aircraft cabins from the ceiling downward, but the 3000 could have ventilation built into its seats. The designers even proposed a smartphone app to give riders an interface with environmental controls—lighting, window shading, temperature—so that the passenger experience could potentially be crowdsourced. In addition to pushing the limits in its engineering, the 3000’s innovations are grounded in empathy for the passenger. “You have to understand your design,” Vogler says, “from a human point of view.” 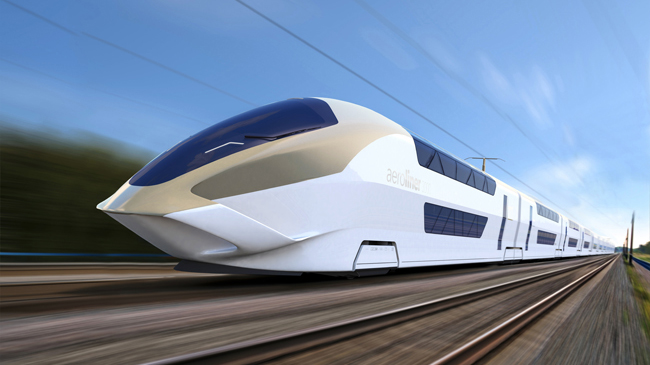 The Aeroliner3000 is designed to carry 1400 passengers in a double-deck format on UK’s loading gauge tracks. 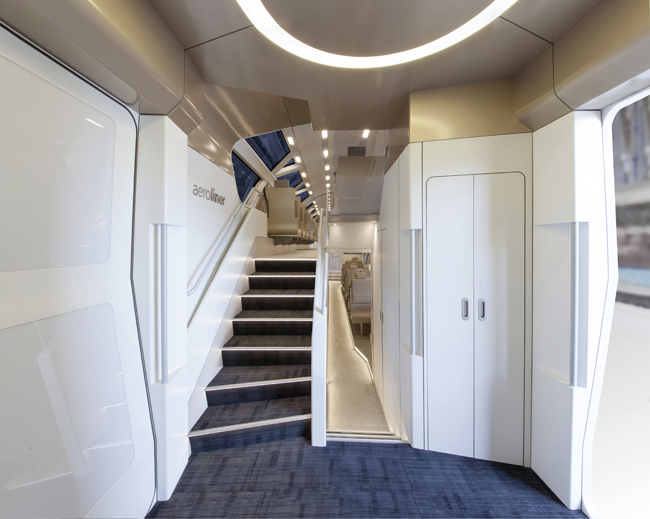 The interiors have the sophistication of airline cabins, with fabrics from Kvadrat and flooring from Forbo flooring.