Bucky’s Biosphere Gets A Friend

For the 50th anniversary of Expo 67, Dror has announced its proposal to give R. Buckminster Fuller’s Biosphere a long-awaited companion.

All images courtesy of Dror

To celebrate the 50th anniversary of Expo 67, the New-York based design studio Dror has announced a proposal for the world-famous site: to give R. Buckminster Fuller’s Biosphere, which has served as a landmark monument on Montreal’s Île Sainte-Hélène for decades, a long-awaited companion. The studio has designed another dome, an 150-meter wide aluminum sphere covered by natural vegetation, that would serve as a site for festivals and events. The structure, still speculative at the moment, is meant to suggest an alternative to Parc Jean-Drapeau’s development plan and could feasibly be built within two years. Read on for Dror founder Dror Benshetrit’s statement on the project’s inspiration.

From studio founder Dror Benshetrit: In anticipation of the 50th anniversary of Expo 67, the studio developed a new cultural landmark for Montreal’s Île Sainte-Hélène, the original site of the monumental World Fair that took place in 1967 and home to Buckminster Fuller’s Biosphere. Following a tour of the island with the Buckminster Fuller Institute, I was largely inspired by the unharnessed opportunity that existed within Parc Jean-Drapeau and set out to reimagine the seasonally-used grounds.

I started thinking about Fuller’s geodesic dome, a lonely orphan in the Montreal skyline, and what it takes to form a movement, and our concept was born.

We propose a second, enlarged dome for the western tip of the island that ushers Montreal into the future. Poetically engaging Bucky’s existing structure in a visual dance, interacting much like the sun and the moon, the Biosphere is no longer alone; it has a partner.

Presenting a hybrid framework for nature and technology, our 150-meter-wide aluminum sphere is transformed into a magical cultural space with a planted canopy. This vegetated cover, serving as a natural sound buffer, offers an enchanting and responsible backdrop for events year-round: festivals, fairs, concerts, installations, food markets, performances and hackathons. The possibilities are endless. 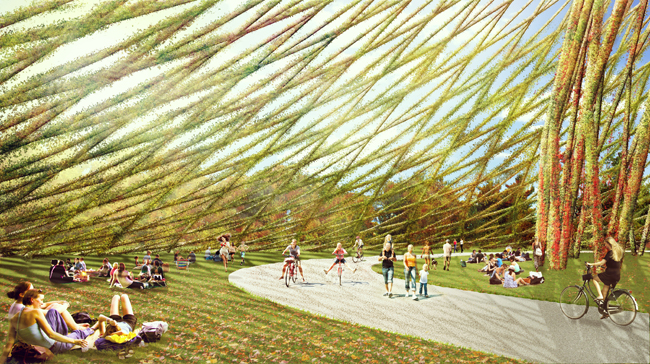 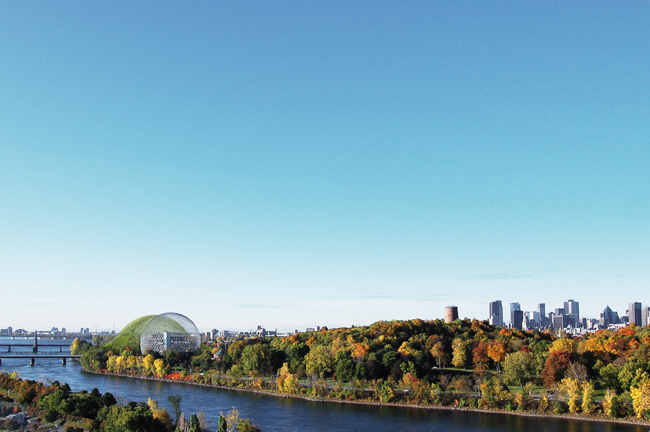 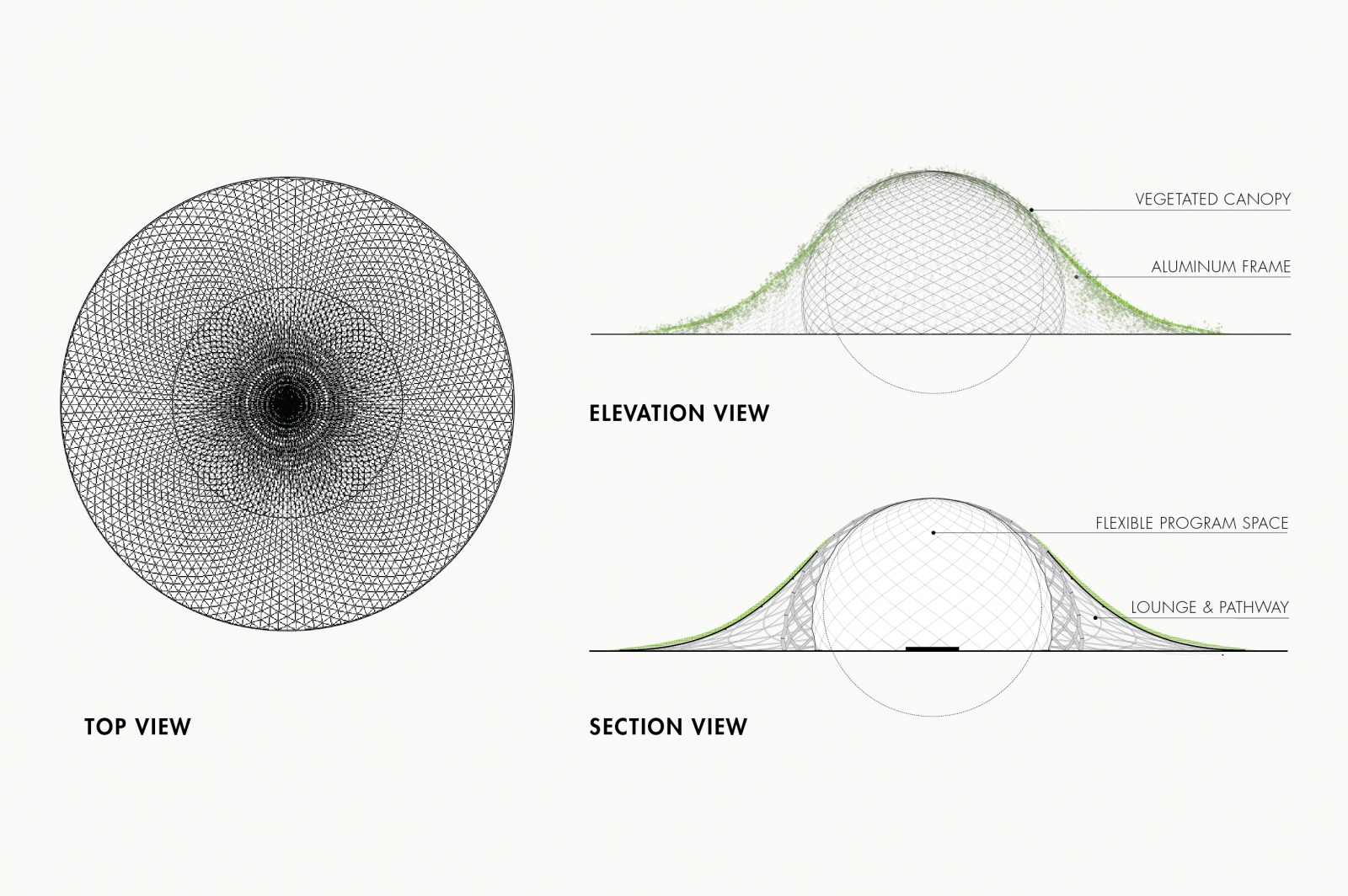 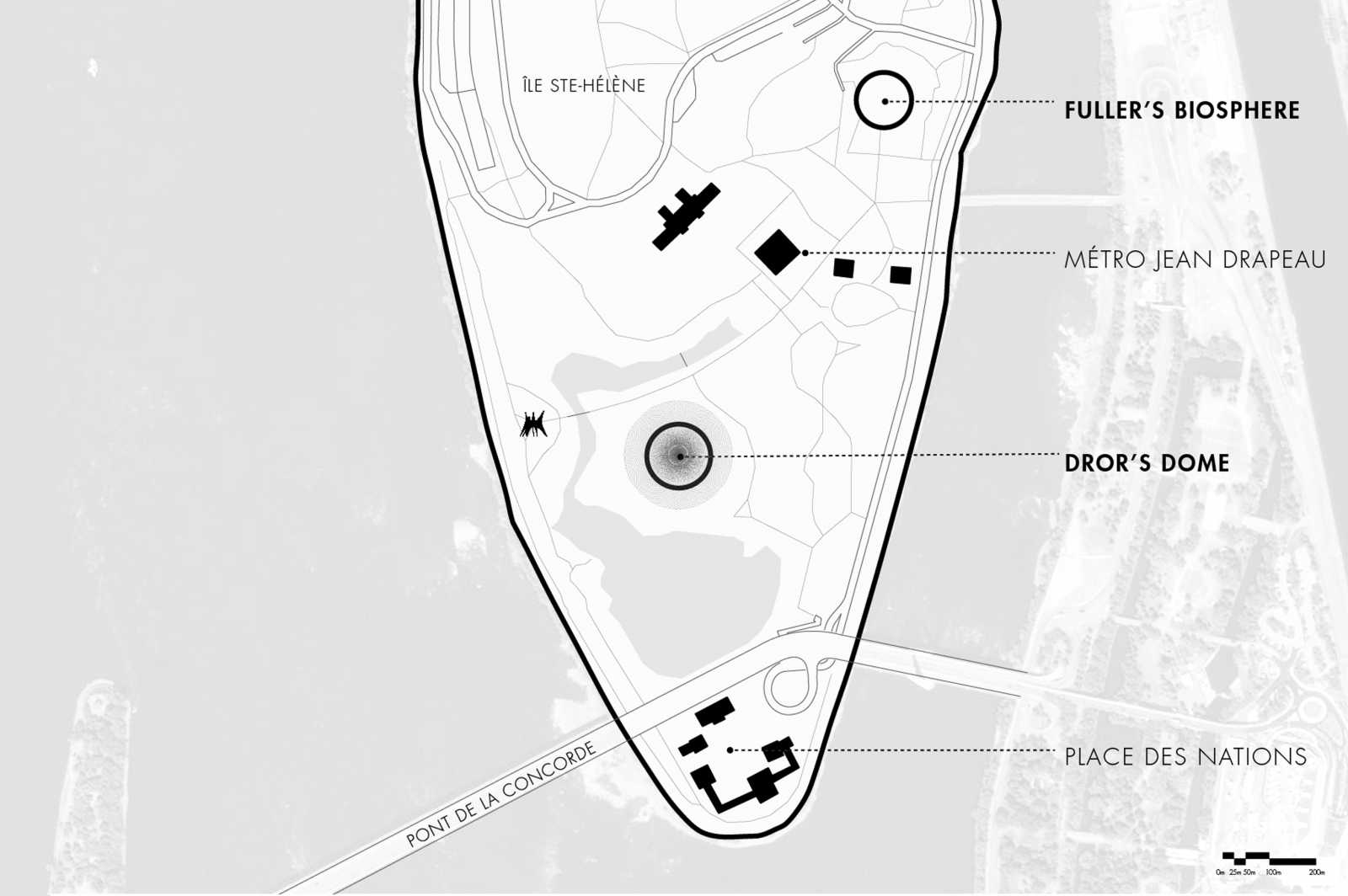