This year’s Design Workshop at Parsons The New School of Design proposed an addition to a New York City landmark, the Highbridge Park Pool.

Since its establishment in 1996, Design Workshop at Parsons The New School of Design has been providing pro bono architectural and construction services to nonprofit organizations, allowing their graduate architecture students to design and meet community needs, through projects ranging from rooftop gardens to recreational grounds for children. This summer, the program has teamed up with New York City’s Parks & Recreation to transform a 19th Century landmark.

Tucked away in Washington Heights is one of the oldest surviving structures, the High Bridge, a landmark noted for its historical significance. Since its construction in 1848, the High Bridge has been used as an aqueduct, bringing fresh water to the city as the main source of water inflow. The bridge was eventually closed in the 1970s due to rock-throwing from above and the reservoir that once accompanied the historical aqueduct was replaced with the Highbridge Park Pool. Designed by Aymar Embury II during the Robert Moses era, the Highbridge Pool complex was one of the eleven pools built as a part of the Works Progress Administration’s attempt to create jobs during the Great Depression. Once completed in 1936, it became open for public use, serving the local community. 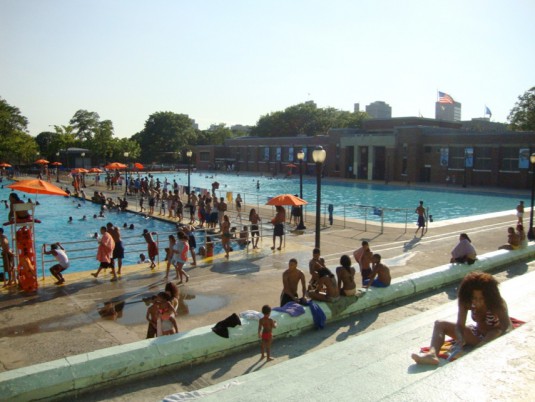 Since 2000, the New York Restoration Project has been working towards restoring the High Bridge with new access ramps, viewing platforms and lighting. Following the lead of the bridge renovation, Design Workshop is also proposing their own addition, Splash House, which will be a new pool-deck pavilion to extend the current Highbridge Pool and provide its users with new lockers and changing rooms.

Currently, in addition to the pool, the Highbridge Pool and Recreation Center provides Washington Heights residents with a dance studio, basketball court, billiards room and computer center. However, due to limited space, facilities have to accommodate dual uses like converting the indoor basketball court to become a locker room for the pool during the summer. With the addition of the Splash House, the recreational center will be able to provide the 2,400 daily swimmers with an outdoor pavilion to meet their needs instead, freeing up the indoor recreation facilities to provide alternative year-round fitness and activity space.

After a unanimous vote from the Landmarks Preservation Commission in mid-May, the Splash House project was able to raise $16,493 through their Kickstarter campaign by June 1, and construction began immediately afterwards. Made out of glulams (glued laminated timber) forming the structure’s elegant and strong spine, benches made of reclaimed cedar wood and concrete column footings, Splash House will feature a locker and changing area on the deck, a water curtain and a security desk, reorganizing the current circulation to make better use of the facility’s space. The design, conceptualized and built on-site by the nine graduate students, will use light systems, ventilation and water that is natural, making the structure porous and open.

While Splash House is being built this summer in preparation for a summer 2012 launch, its progress can be tracked by visiting the project blog. The students document their involvement thoroughly, from the initial conception to the final construction, as they work with various city entities for project approval. As Splash House develops over the next year, it will continue to offer both a valuable education to Design Workshop students, and enhance the community they work in.