The first of a two-part essay, five campus architects speak about how their schools are changing.

How do universities build identity? How much of a school’s identity is bound up with its academic achievements, and what else may account for it? This is the first in a two-part essay about campus architecture and planning.

A school is more than just the sum of its intellectual records. Its legacy is very much tied to a physical place: its campus. More than a mascot or a symbol, the design of a campus and the buildings that form it greatly contribute to a university’s lasting identity.

The key, then, is how a school’s material identity advances its intellectual mission. As with any large institution, one imagines that the building of a university begins with a master plan. However, when the goal is to foster intellectual work and community, the concept of a master plan must be expanded to include distinctly intellectual components. For example, academic buildings often physically symbolize the type of scholarly exploration and research that takes place therein. Administrative centers, on the other hand, anchor the more idealistic work taking place in the lecture and science wings. At the same time, individual buildings can function collectively as didactic forums for the public, demonstrating such principles as energy and water-use efficiencies. Lastly, the circulation between the buildings themselves is important. Open green space, for instance, can accommodate crowds, lectures, and even protests, providing a counterpoint to the more stately, processional routes that crisscross a campus.

Clearly these are different, and at times conflicting, agendas. How are they ranked and pursued by individual universities? To determine this, one must contextualize the goals within the universities themselves. Five campus architects at different California universities reveal how similar factors work in concert to produce very different visions and results. For some the initial plan of a school continues to wield influence over future developments, while in other cases a committment to architectural movements and types gives rise to an eclectic, flexible approach to campus design. 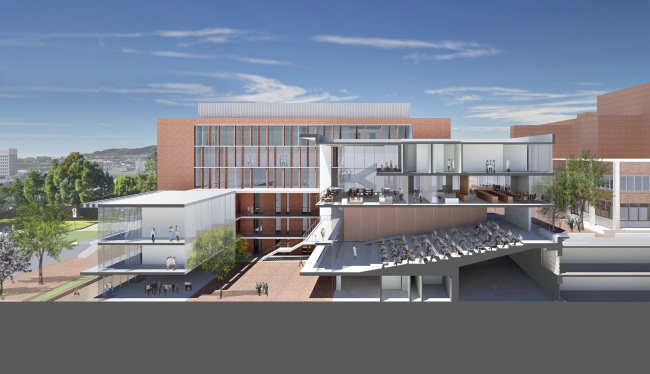 The Teaching & Learning Center for Health Sciences (in construction) incorporates walls of red brick, a reference to the older Romanesque-style buildings on UCLA’s campus.

In considering how initial buildings shape a school’s subsequent development, a key issue is ensuring that they advance an overall vision of what the school represents. At UCLA, the original inspiration for the univeristy grounds informed later campus projects and additions. In doing so, the unity of the campus plan was maintained, while the school’s history, through its architectural fabric, was preserved. Jeffrey Averill, AIA, and Campus Architect, explains the planning strategy: “The original campus developed as part of a Beaux-Arts axial master plan that drew upon the Italian Lombardy-Romanesque for inspiration and reference rather than the models of Collegiate Gothic from Oxford and Cambridge. With the landscape and sunlight of Southern California, these northern Italian buildings seemed more appropriate.”

Yet later projects have expanded beyond the original vision, reflecting changing aesthetics: “During the post-war expansion phase though the Romanesque style was abandoned for the most part in favor of modern architecture, the Regents insisted that the new buildings still utilize a warm, red brick on the exteriors of most of the buildings. More recent buildings that may vary from this treatment of brick still use brick to continue those connections and root the buildings to the UCLA context.” What’s more, current development demonstrates how intellectual and environmental goals exert their influence: “An accelerated push to build substantially more on campus housing has provided economical choices for students, resulted in stronger academic performance and significantly reduced environmental impacts and commuter vehicle trips.” These are coupled with the construction of new science buildings that will function as showcases for “California native and adapted plant types,” as well as opening up opportunities for green roofing and other sustainable strategies. 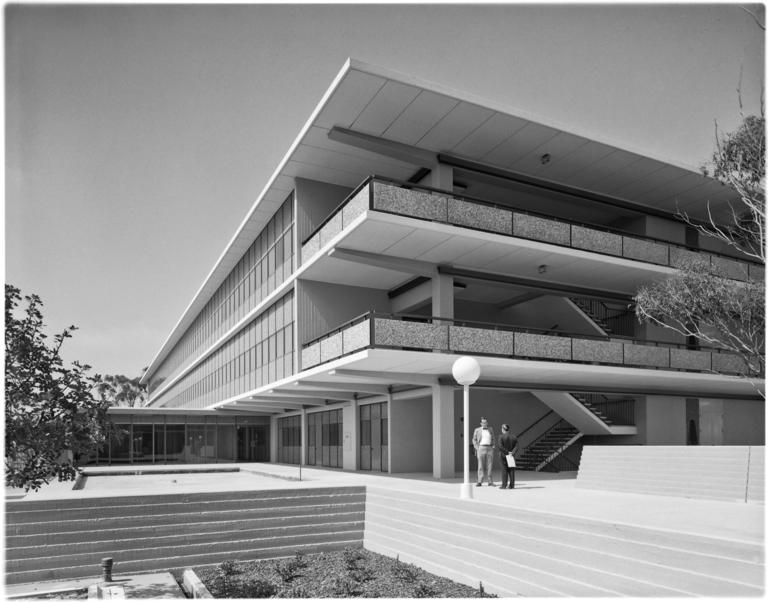 This approach contrasts sharply with UC San Diego. UCSD, founded in the 1960s, is strongly identified with modernist architecture. The iconic Geisel Library conjures up images of a cubist spaceship but also functions as a draw and an easily identifiable symbol of the campus. Boone Hellmann, FAIA, recently retired Vice Chancellor and Campus Architect at UCSD, notes how the school aligned itself with forward-looking architecture: “The campus began in development in the mid 60’s. Modernism was very much present in the vocabulary and vernacular of the architects in those days. Additionally, construction technology was contributing to the design solutions.” This approach has added to the architectural eclecticism at UCSD: “It is immediately apparent that the architecture of UC San Diego is disparate…but that’s not a bad thing. First and foremost, nearly all of our buildings are of a high quality design so there is a commonality about the pursuit of architectural design quality. Second, our landscape is exceptionally strong with the stands of eucalyptus trees and green areas and thus becomes the contextual fabric that is the glue that binds the parts together. The buildings are then ‘inhabitants of the landscape.’”

Of course, continues Mr. Hellmann, current and future developments continue to use the UC San Diego Master Plan. “This is a ‘road map’ that guides the development of the campus. It carefully considers available land resources, circulation, academic drivers, open space, etc., such that future buildings are carefully considered into this matrix.” Yet the architecture is not simply an end in itself. It signifies the academic work being done at the school which in turn attracts new students, faculty, and administrative staff to it. In other words, the modernist, even futuristic, campus references the equally scientific intellectual work done by UCSD students. One may think, then, of Math and Sciences as a strength at the school and indeed, UCSD is well-known and ranked highly for its Engineering and Science departments.

In the next installment, we will examine how Pomona College, Stanford, and UC Merced have integrated their intellectual missions with distinctive architectural visions.