In the second of a two-part essay, five campus architects speak about how their schools are changing.

How do universities build identity? How much of a school’s identity is bound up with its academic achievements, and what else may account for it? This is the second in a two-part essay about campus architecture and planning. Part One examined the planning tactics of UCLA and UC San Diego.

Stanford offers another vision of connecting its physical identity with its academic mission. The school “continues to follow the principles of the original campus master plan by Frederick Law Olmsted,” says David Lenox, University Architect and Director of the Campus Planning & Design. In practice, these principles can be aesthetic, such as the university’s preference for hipped red clay tile roofs. They are one of Stanford’s most emblematic architectural features, says Lenox. As such, “we continue to construct buildings with this feature but we have also found innovative ways to reinterpret it.”

Yet the goal with many of the newer buildings is to go beyond the envelope and begin to shape space in a way that’s symbolic of Stanford’s scholarly identity. The Bio-X Clark Center by Foster + Partners, for example, incorporates many of the elements and materials of the original campus buildings, but breathes new life into them. The structure wraps around a central, open-air common space that bleeds into the surrounding campus grounds. It is a spatial model that follows from the school’s approach to interdisciplinary research: “In our new buildings and redevelopment of existing academic precincts we focus on creating connections between the interior and exterior environments as well as creating unique hubs that relate to the programs,” Lenox explains. “The new buildings in the Arts District are more contemporary to reflect the creative programs within, while many of our buildings in the School of Medicine are also less traditional reflecting the research and discovery within.” 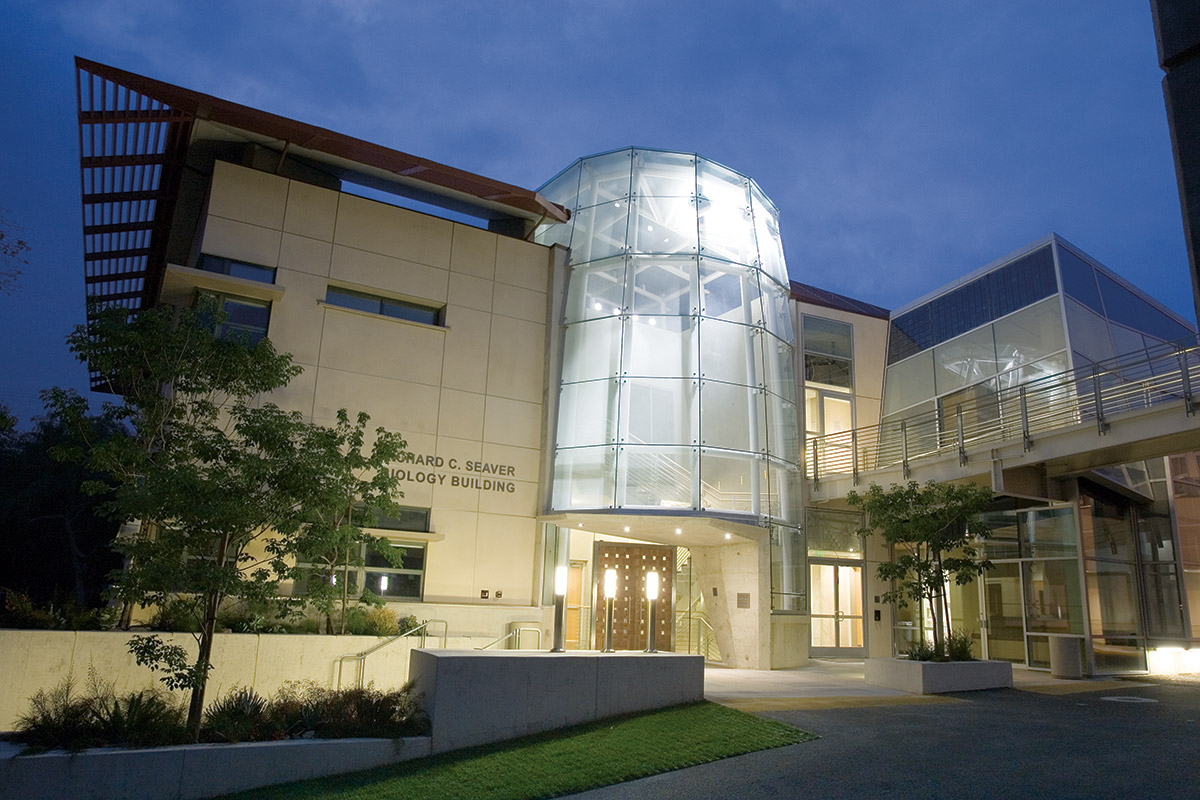 At Pomona College, the challenge of maintaining a strong physical identity associated with the academic mission of a school is presented with a unique twist: while the school is a member of the Claremont Colleges consortium, it is also an independent school with its own set of departments. How, then, does it maintain its unique identity? Pomona presents yet another iteration of how to combine the past, including Myron Hunt’s campus master plan and Ralph Cornell’s landscape master plan, with current practical needs and technological advances.

Pomona is currently steeped in construction that recalls the building materials and elements established by the venerable campus landmarks. The projects are both varied and numerous, including offices, a new laboratory, auditorium, athletic facilities, and even an art studio with a live webcam of the construction. These buildings, however, must also comply with the city of Pomona’s Green Building Standards, which calls for LEED Gold certification at the very least.

How to reconcile the one with the other? The Richard C. Seaver Biology Building, which houses labs for Ponoma’s biology faculty, functions as an ideal case study. The building incorporates several sustainable technologies in its design, including its use of recycled materials, waterless urinals, as well as low-emitting materials. But it also gestures towards the older campus buildings and the architectural legacy they represent. Says Andrea Ramella, Assistant Director Planning & Project Management: “The buildings are more modern and they play off their traditional neighbors by using some of the same techniques; varying the stories, using a ribbon window effect on upper floors; and incorporating many of the same materials in new ways.” All these architectural elements—materials, form, and certifications—work in concert to remind students and visitors that, for all its traditions, Pomona stands on the academic cutting edge. 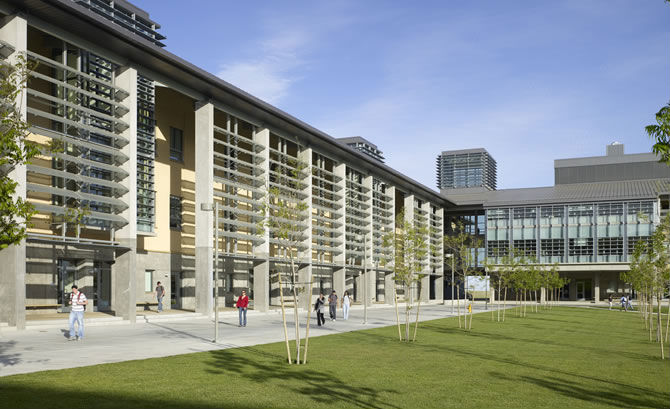 The Science & Engineering building at UC Merced, with the quad in the foreground.

All these schools have one thing in common: they have been around for at least forty years, while some were founded in the 19th century. The question is, how does one build identity from the ground up? Enter UC Merced. Since its inception in 2005, UC Merced’s status as the first new research university in the US this century has been both blessing and curse. Its vision is grand: to match the latter distinction, the school has endeavored to have all of its buildings meet LEED standards.

The pressure, however, is for the school’s academic credentials to match its physical identity. Initially, the school struggled to build its academic reputation. But in recent years, its resource-efficient, future-oriented campus points to an academic core that is equally committed to scientific advancements. Indeed, UC Merced has decided that research opportunities should not be limited to its graduate students, but should also be integral to its undergraduate curriculum. Students are responding and with that, so is the next phase of the campus’s development. This past year, the number of applicants have soared ten times above the available slots. Says Thomas E. Lollini, FAIA, Campus Architect and Associate Vice Chancellor, “We presently serve about 5,700 students. However, the campus is embarking upon an ambitious undertaking of its second phase of development to accommodate a population of 10,000 students by 2020. The 2020 Project will be planned and implemented as a mixed-use district.”

At UC Merced, then, the school’s goals are written in its campus and all its buildings. These embody the principles of conservation and resource-efficiency combined with technological innovation: “All buildings completed and currently under constructions are expected to exceed California’s stringent energy codes by 30%. The architecture reflects an array of environmental design strategies to minimize energy demands, yet contribute to an integrated urban design fabric while employing a common design language with varied design interpretations. Its sustainably designed and managed landscape adds to the sense of place.”

There are many clichés about the future and how it shapes universities: that it is now, and that it has yet to be written. But what is most interesting is that combining intellectual pursuits with architecture creates some unique projects and solutions, both for the universities already established, as well as those yet to be founded.