Yerba Buena Center for the Arts presents inspired tours of historic land use throughout the Bay Area.

“Look away from the view,” our tour guide, David Buuck, instructed us as we approached San Francisco’s Treasure Island from the Bay Bridge. Operating under the auspices of BARGE (Bay Area Research Group in Enviro-aesthetics), Buuck designed his “Buried Treasure Island” tour for Yerba Buena Center for the Arts’ Bay Area Now 5 triennial festival of visual art, film, and performance. The 400-acre artificial island’s history is both rich and unsettling. Constructed from fill dredged from the Bay, it was created to host the 1939 Golden Gate International Exposition. Intended to be used as the city’s airport after the exhibition closed, the island was instead transferred to the Navy, which used the site as a base during World War II and then as a training ground through the early 1990s.

The island was returned to the City of San Francisco in 1997, and is slated to be redeveloped as an eco-community of 13,000 residents (though, as Buuck pointed out, it has also been eyed over the years for a women’s prison, Olympic training center, casino, conference center, and old-growth redwood museum, fashioned from transplanted trees). Currently, most people visit the island to take in its stunning views of the San Francisco skyline (or the sky itself when, as on this day, the Blue Angels are flying overhead). Approximately 3,000 residents live in the island’s market rate and subsidized housing, served only by a small convenience store that closes each day at 3 p.m. With its highly uniform dull beige and slate blue color scheme, stock housing, and abandoned gas station, bowling alley, community center, elementary school, etc, the island has a palpable depressed small-town feel. Every time I visit, I’m reminded of the pre-casino era Saginaw Chippewa Indian Reservation outside my Michigan hometown. 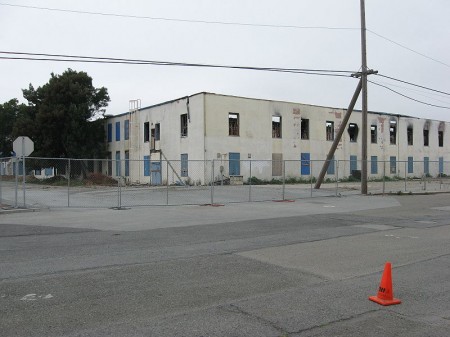 Abandoned beige and blue buildings of Treasure Island
(Photos, above and below: Goodshoped35110s, Creative Commons) 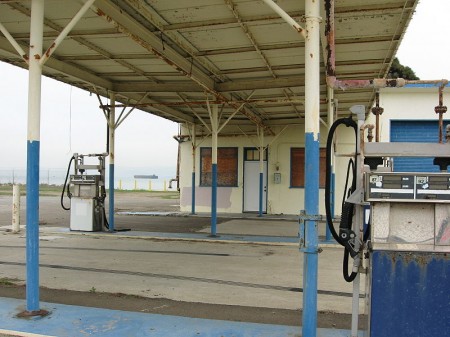 Incorporating the past of the island and the histories that may yet be, Buuck’s tour was part reminiscence, part guerilla theater, part urban intervention, part social activism, and wholly fascinating. A sad lament, performed bay-side, for a mythical goddess of the future followed a detour to an outdoor alcove gallery (complete with museum-quality placards) of graffiti and bad Navy paint jobs. 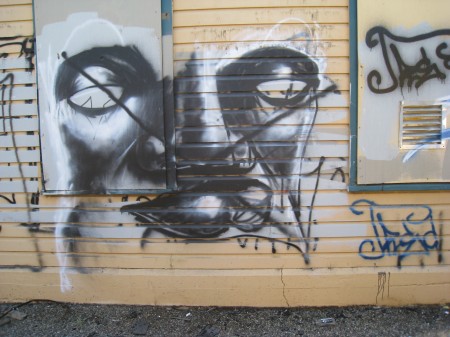 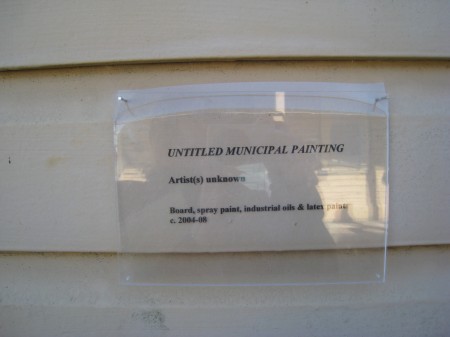 “Someone” renamed the Naval Reserve Readiness Center “Matta Clark Park,” careful to observe the island’s duotone color scheme. Silent, Tyvek-suited apparitions eerily materialized at numerous sites marked “hazardous waste.” Buuck iterated the government’s and military’s activities at the site – earthquake preparedness training, fire training, police motorcycle training, toxin research, moth eradication testing, nuclear explosion simulation – “constant rehearsals for disaster on an island itself that is a hazardous waste site and basically a sinkhole.” And he routinely directed our attention to the disturbing specter of inhabited homes directly adjacent to boarded up and/or fenced off ones, questioning what made one building on this polluted island safe to live in while the one next door was not. “I haven’t been able to get anyone to answer that,” became a refrain. 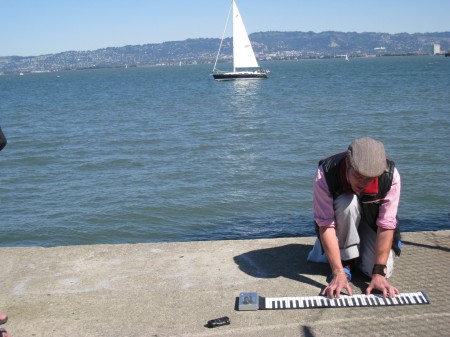 Perhaps the most brilliant parts of the afternoon, though, were the serendipitous moments which perfectly underscored Buuck’s premise that “any guidebook or any tour is only provisional” as history is constantly rewriting (and writing over) itself: the formations of geese flying to the tune of fighter jets, the sole straggler from a nearby BMX rally riding back and forth behind the Tyvek ghosts, the resident who briefly joined us, offering his perspective of life on the island. “It’s pretty nice,” he observed. “Except for the toxic waste.”