Let the Sunshine In: Cadaval and Solà-Morales’ Sunflower House is All Views 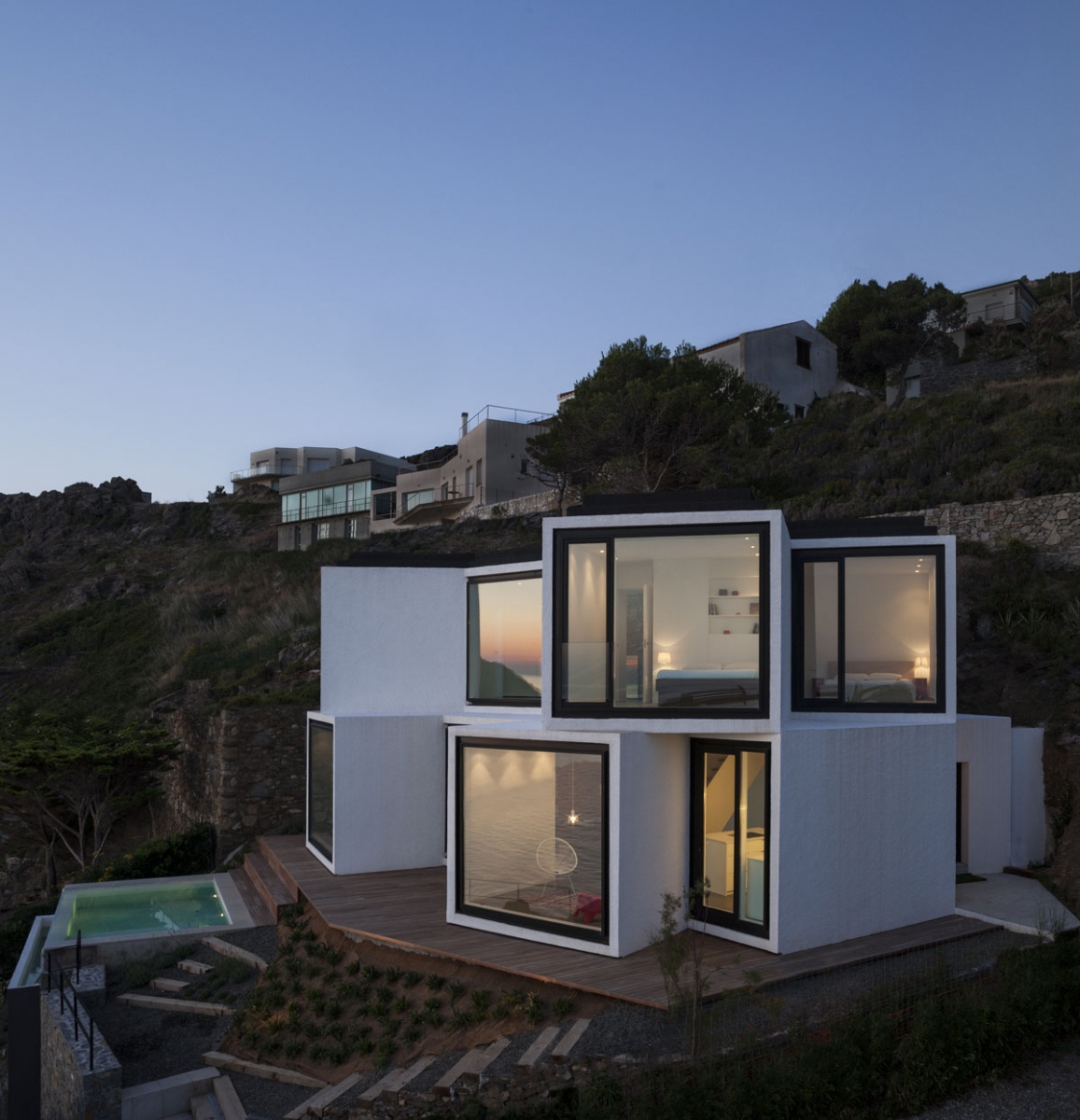 The architects never approach a project with local zoning laws in mind, so as not to place focus on what can’t be done. “About halfway through the project, we start taking that into account,” says architect Eduardo Cadaval. “We prefer to work with that sort of freedom.”

For two international lawyers based in The Hague, the search for their place in the sun ended in the purchase of a coastal plot of land in the remote Spanish village of Port de la Selva. For architects Eduardo Cadaval and Clara Solà-Morales, it was the beginning of a dream project.

Port de la Selva is the last stop on the Costa Brava before the famously jagged coast-line softens out into France. Solà-Morales’s parents have a holiday home there, and the couple—partners in both work and life—have spent their weekends and vacations in the region for years. “We know the countryside like the backs of our hands and always wanted to build there,” explains Cadaval from his Barcelona studio. “When the clients told us that was where the land was, we nearly fell over. They had bought the last available sea-facing plot and had seen our work on the Internet. It was a wonderful coincidence.”

Logically, the project’s aim was to harness the location’s breathtaking natural assets. The architects, who are fans of Álvaro Siza and the pure, Portuguese school of architecture, first started playing around with a solid cubic structure floating above a swimming pool. But a basic problem remained—the north-facing plot receives almost no direct sunlight. Also, they reasoned, why frame only one view when several were there for the taking? 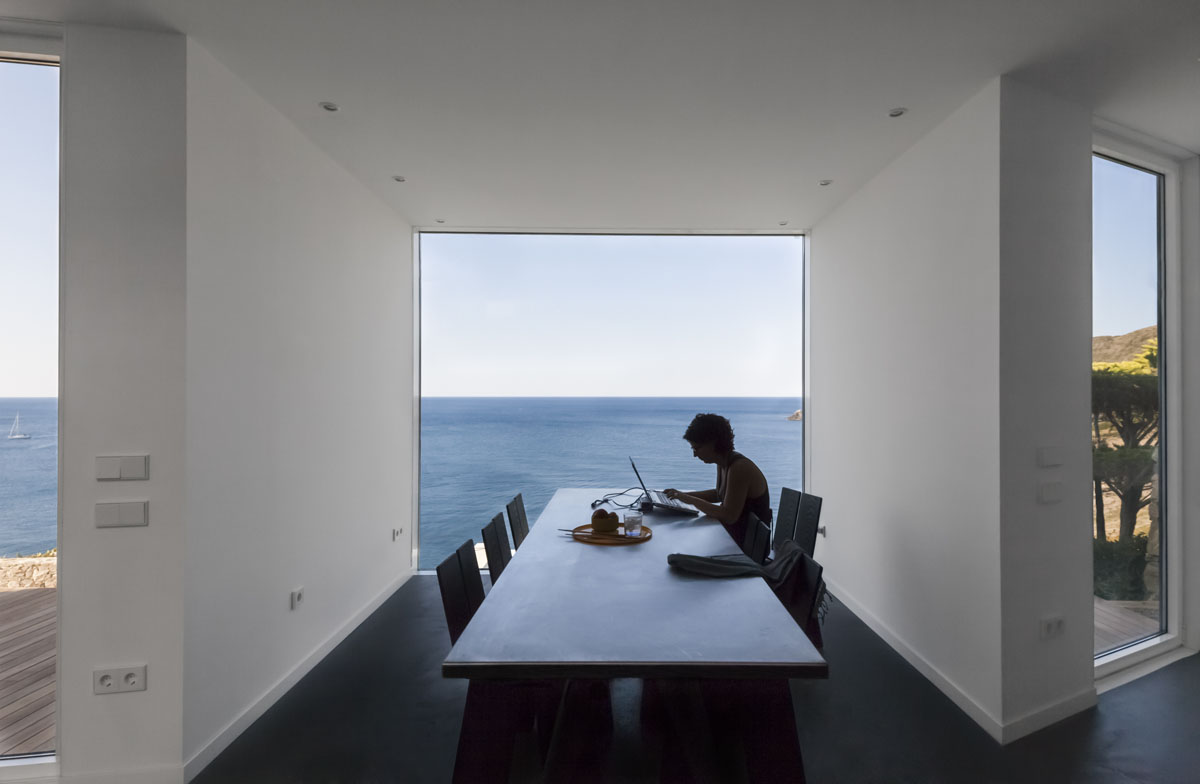 The view from the house’s dining area. Working in 3D, the architects played with the volume and positioning of the cubes in order to take full advantage of the position of the sun and Mediterranean views. The home has been designed to “capture” the sun on its seasonal course.

Cadaval holds up a shot of the plot’s view super-imposed with seven gilt frames. “This image explains the project’s essence,” he says. It’s reminiscent of a Surrealist painting—apt given that Salvador Dalí spent much of his life in this part of the world and painted the Costa Brava profusely. The duo used the image to show their clients how a fractured facade affords a wider panorama than a continuous one. By breaking up the volumes of their home into several glass-windowed units, they would gain optimum proximity to the Mediterranean environment they so craved. Sunlight would enter via the glass-enclosed rear facade and lateral volumes, saturating parts of the home at different points in the day in accordance with seasonal paths. “The home captures the sun from behind, and the views from the front,” says Cadaval. His studio christened the project the Sunflower House for the way its form radiates outward in search of sun and sky. 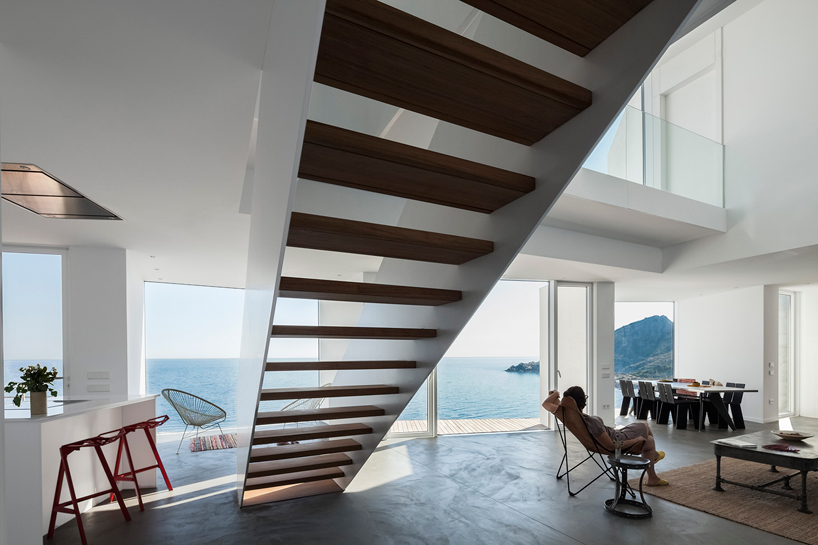 The common area of the home presents double-height ceilings and curtain windows in a kitchen/ living area. “We knew the project was a success as soon as we stepped inside and saw that the view from each cube was totally different,” says Cadaval. On a clear day, the owners can see France.

While the interlocking volumes create a sense of fragmentation, the living experience is continuous. The upper-floor cubes accommodate three bedrooms, a studio that doubles as a fourth bedroom, and two bathrooms (one is an en-suite), and are much smaller than they appear from the exterior, measuring only 13 by 13 feet (the home is 1,937 square feet overall). The downstairs living space is double height and open plan, with a living room, dining room, kitchen, and direct access to the wooden terrace and infinity pool. The patio, as well as the main entrance, sits in the sunniest spot at the rear of the building. Glass curtain walls on the front and back facades afford the patio sea views and allow for outdoor entertaining sheltered from the Tramontane—the famously strong wind that whips through these parts. A green roof helps control interior temperatures, while solid lateral surfaces shut out neighbors, creating the tucked-away, reclusive ambiance that the clients requested.

“The idea was extremely clear,” says Cadaval. “We used simple geometry and the same materials as other homes in the area so that local builders would be familiar with them.” The project took almost 18 months from concept to finish with the owners kept up-to-date via weekly video reports. The end result, though not a place directly in the sun, is modern, succinct, and—above all—quintessentially Mediterranean. 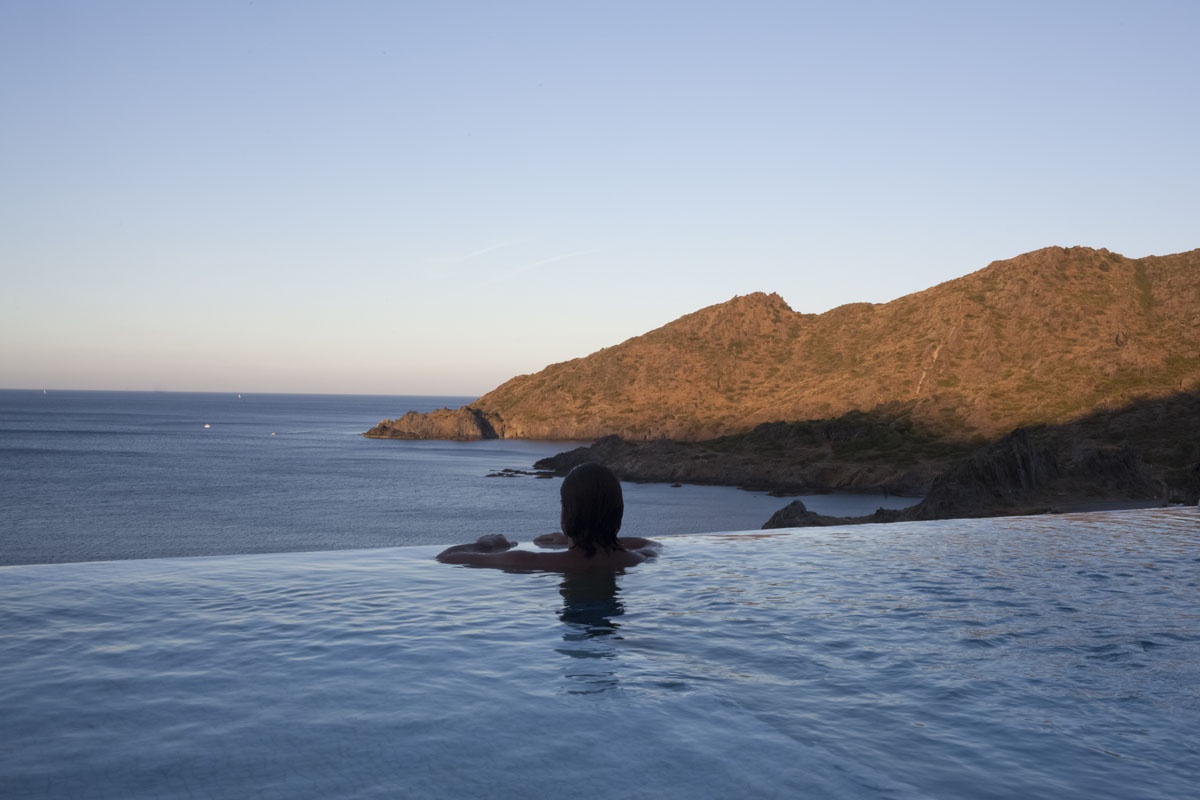