Convincing clients about the benefits of progressive design can be difficult; convincing a skeptical public to embrace an unusual design can be almost impossible. This is certainly the case in Boston. A famous tell-tale example is I.M. Pei withdrawing his proposal to build a glass pyramid near Harvard Square for the Kennedy Library, because Cambridge […]

Convincing clients about the benefits of progressive design can be difficult; convincing a skeptical public to embrace an unusual design can be almost impossible. This is certainly the case in Boston. A famous tell-tale example is I.M. Pei withdrawing his proposal to build a glass pyramid near Harvard Square for the Kennedy Library, because Cambridge residents objected to its “clashing” with local architecture. It ended up in front of the Louvre. 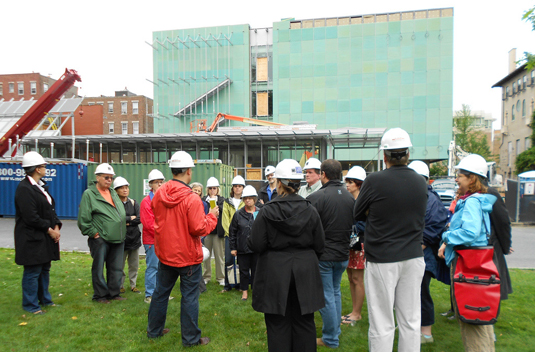 How can we bridge this divide? A skill that should set architects apart is our ability to think creatively and long-term about our physical environment. We should also be adept at communicating our vision.  However, we’re given very little opportunity to communicate with the general public. Most architects talk with citizens only at community meetings that are carefully orchestrated by clients. Ribbon cuttings are invitation only. Lectures by architects are attended almost solely by students and professionals. 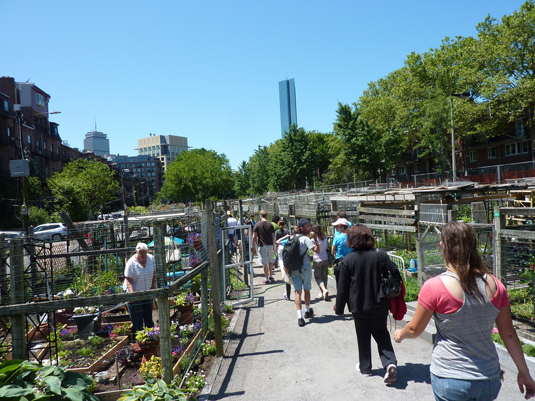 In an attempt to bridge this gap in Boston, a few architects and students in an Architecture for Humanity meet-up group planned a week-long series of informal events in 2006, called Arch Fest, that would appeal to a broad public and offer opportunities for dialogue between designers and the general public. This lives on in neighborhood tours, forums, and open buildings during the Common Boston Festival – an annual celebration occurring every year since 2007. 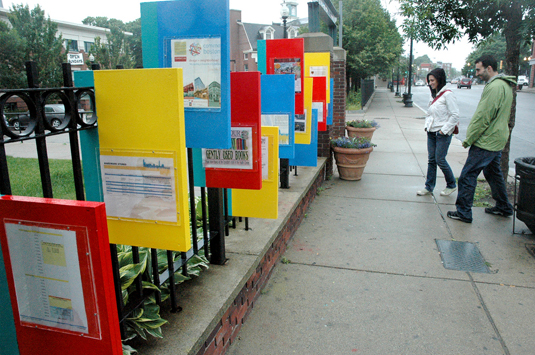 During the Design Build Challenge in 2009, a three-day competition, a student team from the Boston Architectural College designed and built a community bulletin board for the Codman Square Health Center in response to their request for a more playful, welcoming way to share information with the neighborhood

However, showing the beauty and benefit of what’s already in place is one thing; convincing people of an innovative idea for the future is another altogether. With this in mind, new events across the country are being inspired by the current strain of Tactical Urbanism, exemplified by projects like Build a Better Block, Park(ing) Day, and Open Streets.  In Boston, the Common Boston Common Build gives clients—and the general public—temporary solutions to big problems in hopes of convincing them of the power of creative physical interventions. The competition is a non-threatening way to argue for radical urban interventions through small-scale, temporary works enacted during a competition in which the community group is in a position of authority. 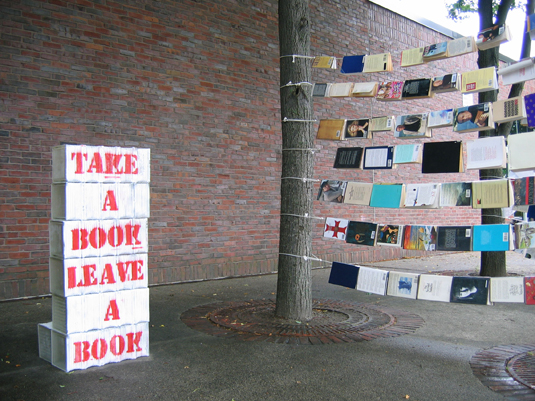 For the Design Build Challenge in 2009, a partnership between Common Boston and Project Locus, a student team from The Cooper Union in New York created a public book share outside the Codman Square Public Library

Started in partnership with Project Locus, the Common Build was first held as a Boston edition of their 72-hour Design Build Challenge, a competition in which teams are given three days to meet with a real client and discuss their needs, come up with a design for these needs, and build the design. The Common Boston Common Build has continued to this day through partnerships with small non-profits in Codman Square, the Urban Wilds program of the Boston Parks & Recreation Department, a young organization called Lost in Boston, and – this year – the Victory (community) Gardens in the Fenway. 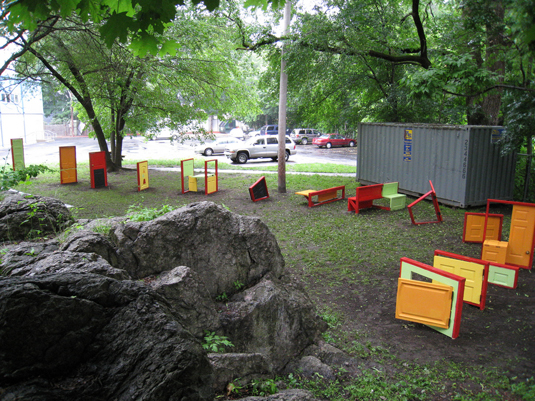 For the Design Build Challenge in 2009, a partnership between Common Boston and Project Locus, a team of professionals from Perkins + Will and Lee Kennedy Company created a play area outside the Codman Square YMCA

Designs have given clients and passers-by the opportunity to see an unexpected transformation to an otherwise ignored fence, walkway, façade, or overgrown park. This year’s competition provides a perfect microcosm of designing in a typically wary Boston neighborhood setting. As Mike Mennonno, director of the Victory Gardens, stated during the launch of this year’s Common Build, gardeners are a “paranoid lot” because they have to protect their gardens against critters, bad weather, and inconsiderate strangers. Yet the garden is also a community and a neighborhood asset that must have a positive civic impact. Bridging the divide between private and public, past and future, citizen and architect is the tricky task given to the Common Builders for three days. If their projects are a success, they may help the architecture profession build a pubic that is not only trusting but also an advocate for creative, progressive design. 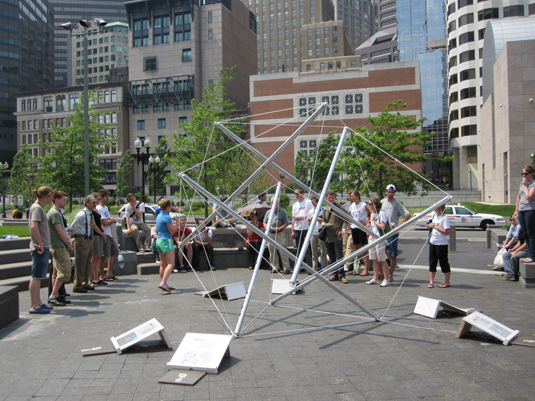 For the Common Boston Common Build in 2010, team “Awesome Design” built “Tensegrity” as a temporary wayfinding device in the Federal Reserve plaza in Boston

Justin Crane co-chaired Common Boston from 2008 – 2011. He is now president of the board of Learning By Design: Massachusetts; chair of the Boston Society of Architects Ethics Committee; and a registered architect at Cambridge Seven Associates.