Confusion on the Canal

Getting lost and making out in the Italian Pavilion at the Venice Biennale.

Things work a little differently here in Venice. For example the vaporettos (water taxis) charge 6.50 euros for a ticket, but don’t tell you that for 40 euros you can buy a season pass that would let you buy tickets for 1.50 euros and is valid for 3 years. If you did know about the pass they probably wouldn’t sell it to you anyways because you can only buy them on a Tuesday between 1:27 and 1:53 while doing the hokey pokey or something like that. Welcome to Venice where things don’t always make sense. 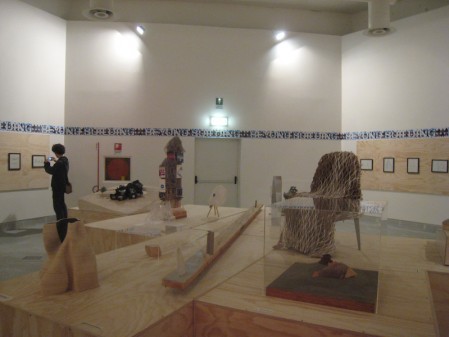 The selected studios represent the past, present, and future of architecture in Betsky’s eyes. The masters representing the past include Coop Himmelblau, Zaha Hadid, Frank Gehry, Morphosis, and Herzog & De Meuron; while there are another 55 or so young firms exercising different approaches and a zone known as Upload City which is a sort of YouTube lounge of videos representing the future. 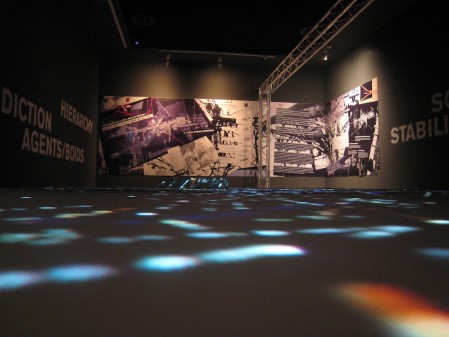 Of the masters, Gehry, Hadid, and Morphosis seem like monograph exhibitions and are a bit boring to those familiar with their work but will inform those unfamiliar with their portfolios. Zaha took charge the fullest and turned the ordinary exhibit space into a room as dynamic as her models with renderings, model presentation, and carpet rendered like her amazing drawings. Frank’s work gives an insight into his approach but fails to illustrate and connect like past retrospectives of his oeuvre. Next door to Frank, Morphosis equally fails to connect with drawings, a model and a projection that really don’t illustrate their work they way it could. Coop Himmelblau continue their explorations on connections between brain functions and urban planning, but the space is  uncomfortable, the main room is dark with flashing lights and intense heat, so most people exit as quickly as they entered. 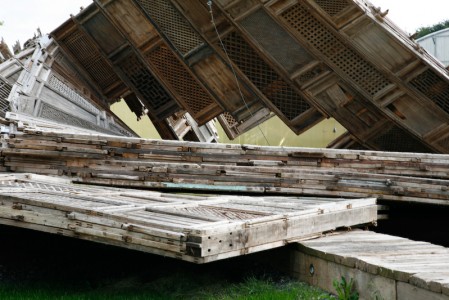 For Documenta 12 WeiWei presented collections of cultural Chinese artifacts from other times including 1001 wooden stools from the Quing dynasty interspersed throughout the other exhibits and “Void Temple”, an installation of 1001 Ming and Quing Dynasty doors and windows that collapsed in a spiral during a storm 4 days after the opening. 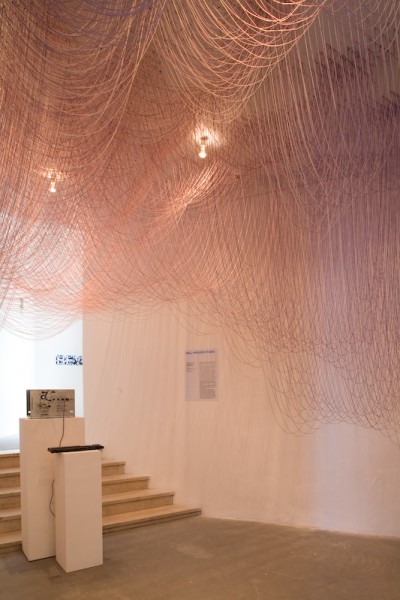 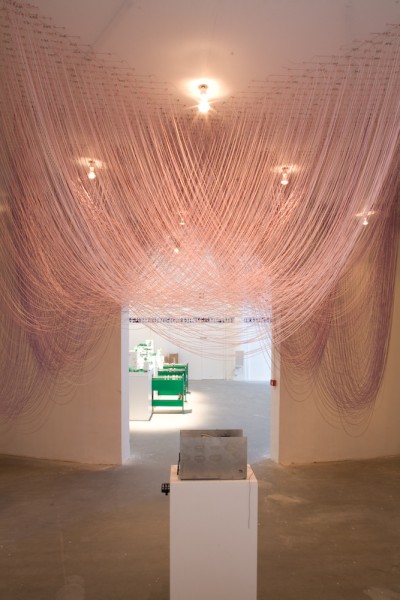 Among the “Present” the approaches and work are equally diverse: there’s the environmental apocalypse now zone covering repurposed materials, buildings and even the Venetian bricole (posts) that mark the waterways; spatial explorations dealing with new approaches, interactions and navigations in transition zones; social activism and new ways of working which including many of the American Pavilion representatives that I’ve already written about. To discuss the work of all the groups would really take days but there are some that stand out or are memorable in the otherwise crowded and sometimes lackluster group. Part of the overall impression comes from the inability to breathe. With the various pavilions, you get a chance to reset, so to speak, as you move from building to building. With the Italian Pavilion, you can’t breathe let alone think or reflect.

Tucked away in the back little closet space that many would consider unfortunate, Ball Nogues Studio presents one installation providing a little air. Turning an otherwise difficult transition space into a playful experience, the  explosion of string catenaries suspended and arranged from above immediately calls to mind Gaudi’s explorations for La Sagrada Familia. The strings also subtly guide the visitor through the space in several different paths without ever actually defining a path. Instead you weave, dodge, duck, and veer as you pass through. Titled “Echoes Converge” the names highlights the sound waves coming through the space illustrating that sound too directs how people move and transition from one point to another. 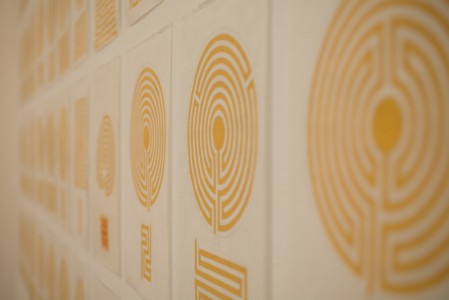 While Ball Nogues helped divide the maze like space, Ben Nicholson presents more mazes creating mazes within the maze. Fittingly, his drawings are tucked into one of the various dead end rooms of the pavilion which already proves nearly impossible to navigate without the barriers imposed by the exhibitions and would surely get condemned for fire egress from any of our fire marshals. Interestingly titled “Going Walkabout” Nicholson describes them as “Slightly different spatial configurations of people: at one moment you walk encircled by others… time passes… and then it is you who are doing the enveloping,” though I’m not sure if he is describing his labyrinths or the thousands of tourists trying to find their way through this city.

Now although I could spend endless hours talking about the things that are wrong with the various projects, I will give a little credit to them just for showing up. Several of the firms were working on budgets in the neighborhood of $1000, which doesn’t even pay for an airline ticket for the participants, let alone shipping and installing costs. But, if you are invited to the Biennale you need to pony up. Sort of like being invited to the ball, you need to drop money on the dress and tux; or at least read over your description text to make sure it describes your project so you get the most response for your effort. 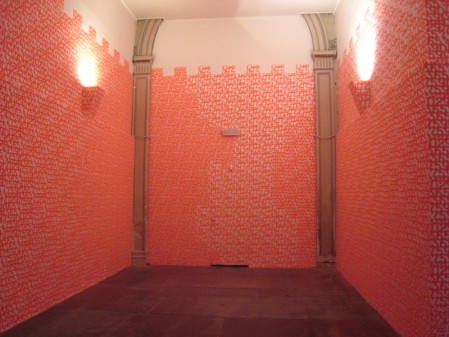 One such effort however really should have had their mother read their text to determine if they were saying anything at all. Not to say mothers don’t understand all this mumbo jumbo archispeak, rather, they are usually the ones that can still smack you upside the head and tell you to change your underpants because you just released a whole load of archicrap. At “Information Castle” you are confronted with this immediately when the bare entrance only contains a strange number image meant to represent binary numbers that hide information like the bar codes on bank statements. The number fields are applied to the wall in the outline of medieval castle walls in a symbolic attempt to suggest that with the mass proliferation of information, there is now so much that we cannot possibly process it all promoting a new informational Dark Age. Oh course nothing actually indicates this on the informational wall text (perhaps it is written in one of the 5 catalogs that you may purchase for a measly 70 euros on top of the already outrageous 15 euros entry ticket) or provides any insight to their ideas. Information as simple as the main point, theme, or concept often remains lacking. 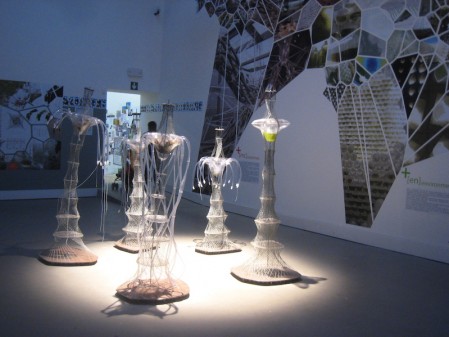 For example, the group Ecologicstudio proposed turning the bricole (water piers marking the lagoon “roads”) into algae biomass production towers, which is a curious proposal of creating a multitasking object, but they fail in their two walls of graphics and superfluous text to adequately mention that these strange jellyfish amoeba sculptures are meant to replace the bricole. They actually only say it in one little line of 12 point text in the entire two walls of images and text. If the entire premise of these “ecomachines” is that they provide an alternative to the existing bricole then that is an important point if you ask me. When I was working on my architectural thesis all so many years ago, the principle of the studio where I interned asked me to explain my thesis to him; five minutes of my long winded, semantically acrobatic description later he responded, “bzzzzz” like the buzzer on jeopardy. He then suggested that if I couldn’t sum up the main point in 25 words or less then I had failed to really say anything of importance. So, keeping that in mind in many ways, Betsky has failed in his presentation of the Italian pavilion. It doesn’t matter if you know all the movers and shakers working in the most experimental ways, if you or they can’t explain themselves to the general public (the people you are supposedly building for) then what is your point or purpose really? 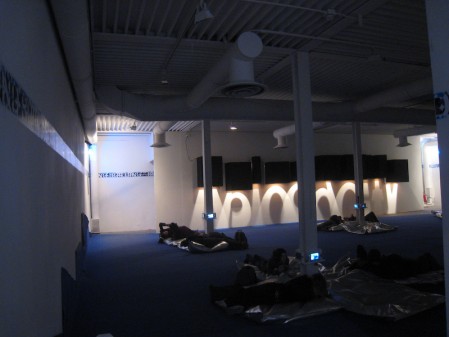 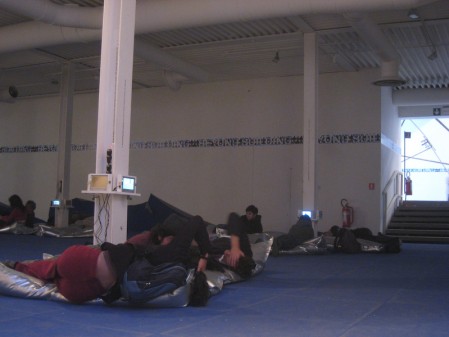 And finally, we have the future of architecture, which seeks through Upload City to explore the virtual spaces we inhabit. Composed of videos scoured from the web, the installation seeks to corral various virtual productions of space that are formed without the rules of the physical world. The premise suggests an archive of virtual spaces that create virtual “rooms” such as digital graphic design, web sites, flash animations, chat rooms but never actually delivers that. What upload city really is, is a sort of filtered YouTube with videos arranged and grouped around various architectural themes. While it does contain some amazing archives from the well known such as the Eames’ Powers of 10 to more obscure interviews and clips such as a Bucky Fuller or Wim Wenders, little of it suggests the type of future space the title and thesis propose. Again, a project that doesn’t match the statement either needs a new project or a new statement. There is however one way I think it contributes to the future of architecture; the installation. The Italians have an expression, “La madre degli idioti e’ sempre incinta,” which means “The mother of the idiots is always pregnant.” To this statement my girlfriend often responds, “If she’d watch more TV, she wouldn’t always be pregnant.”

Now I know you are wondering where I am going with this but, as usual when I rant about the great complexities of the Italians, I have a point. This space creates a TV lounge more suited to making out than watching TV. In a city such as Venice where the teenagers do not have the luxury of the back seat of their parents car to explore their carnal desires, the dark make out zone and large cushions both truly addresses the needs of the participants and promotes the future generations more than any other proposal in the Biennale. Perhaps that was the true intent of Upload City; architects subverting the notions of how you build the future.