It’s hard to conceptually disentangle Rem Koolhaas, the architect, from his erstwhile muse, Manhattan. The city may have changed considerably since the young Koolhaas penned his famous “retroactive” polemic in 1978, but he cannot, it seems, escape from out under its shadow. Have a look at his firm’s latest work, particularly the Seagram-mishmash of the firm’s Shenzhen Stock Exchange, and it’s clear the Manhattan influence remains thoroughly ingrained in the OMA DNA, so long as Koolhaas remains at the helm. The recently opened De Rotterdam complex continues the Remment-Manhattan thread in sterling fashion. But it’s less an homage to New York’s skyline than a wholesale reconstruction of it, a pocket Manhattan that might have been dreamt up by a Surrealist collagist.

The project was commissioned in 1997, but racked with false starts, not too mention having just barely survived the recession, construction didn’t commence until 2009. The finished building, the largest in the Netherlands, is actually many buildings, all stacked on top one another to form a monolithic mass of steel and glass. They form three interconnected “mega”-towers propped up on a wide podium that houses parking and public spaces. This base accentuates the building’s trophy-like character, a nondescript platform that supports the whimsical statuette above. 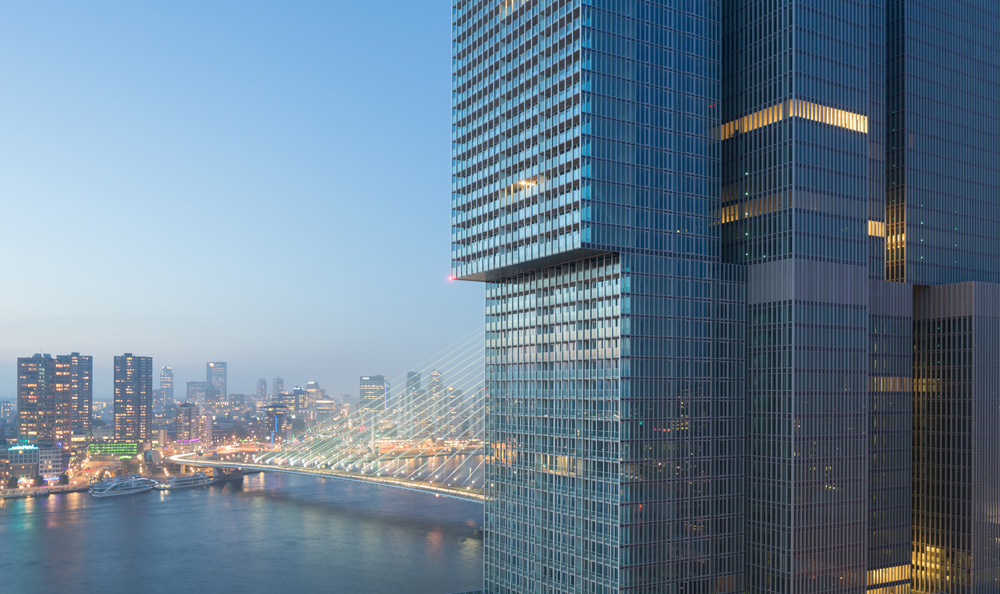 The tower blocks are separated by thin gaps of air, so that, depending on how you approach the thing, the buildings will merge into impenetrable mass or pull apart to reveal the complex’s bricolage structure. The impression of the massing is similar to experiencing the skyscraper-shuffle of New York in parallax. As Koolhaas notes: “Despite its scale and apparent solidity, the building’s shifted blocks create a constantly changing appearance, different from every part of the city.”

Yet the building can also be maddeningly generic. As Koolhaas suggests, the project is best seen from a distance, from where its dynamism can be appreciated. Up close, the details are, in a word, cheap, and have all the lyricism of a listless office tower in any mid-sized American city. (Strangely, when standing at the base of the towers and gazing upwards, the vertical pinstripes created by the mullion system strike an uncanny likeness to the Twin Towers.) That dazzling banality is, of course, part of Koolhaas’s bag of tricks, as he stirringly articulated in “The Generic City” and elsewhere. 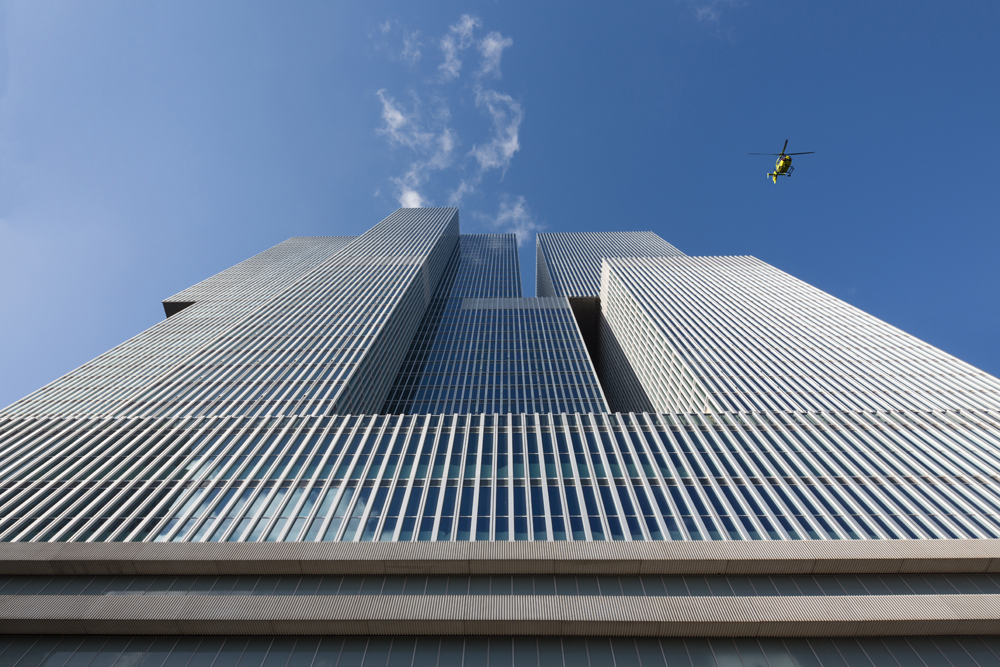 Though the towers are mixed in their programs—one is residential, while office spaces account for approximately 1.5 of the building chunks, with a luxury hotel occupying the remaining stub—the interiors share the same blankness. The closeness of the mullions might make for strange living, as if you woke up every morning in your work office, staring into the mirror-like space of the neighboring slab. If, as OMA has said, the De Rotterdam is a “vertical city,” it’s not a particularly exciting one.

But that is one of the project’s, and Koolhaas’s, most striking achievements. That the architect was able to construct a building this large and uncompromising, in his hometown no less, speaks to the continuing power of the Koolhaas brand, as well as finance capital’s willingness to literally build anything. 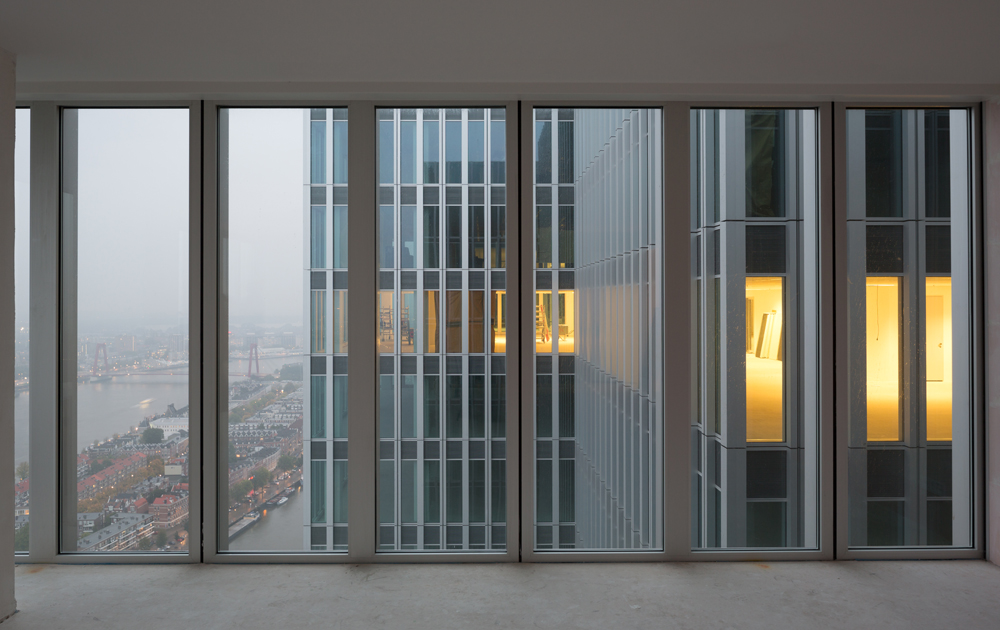 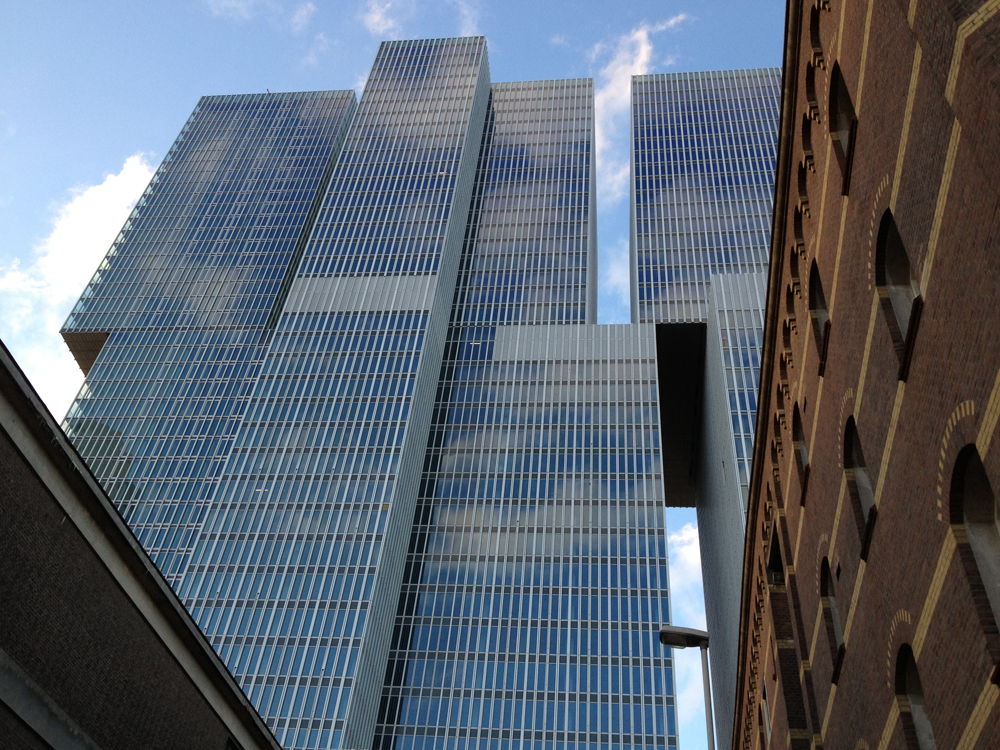 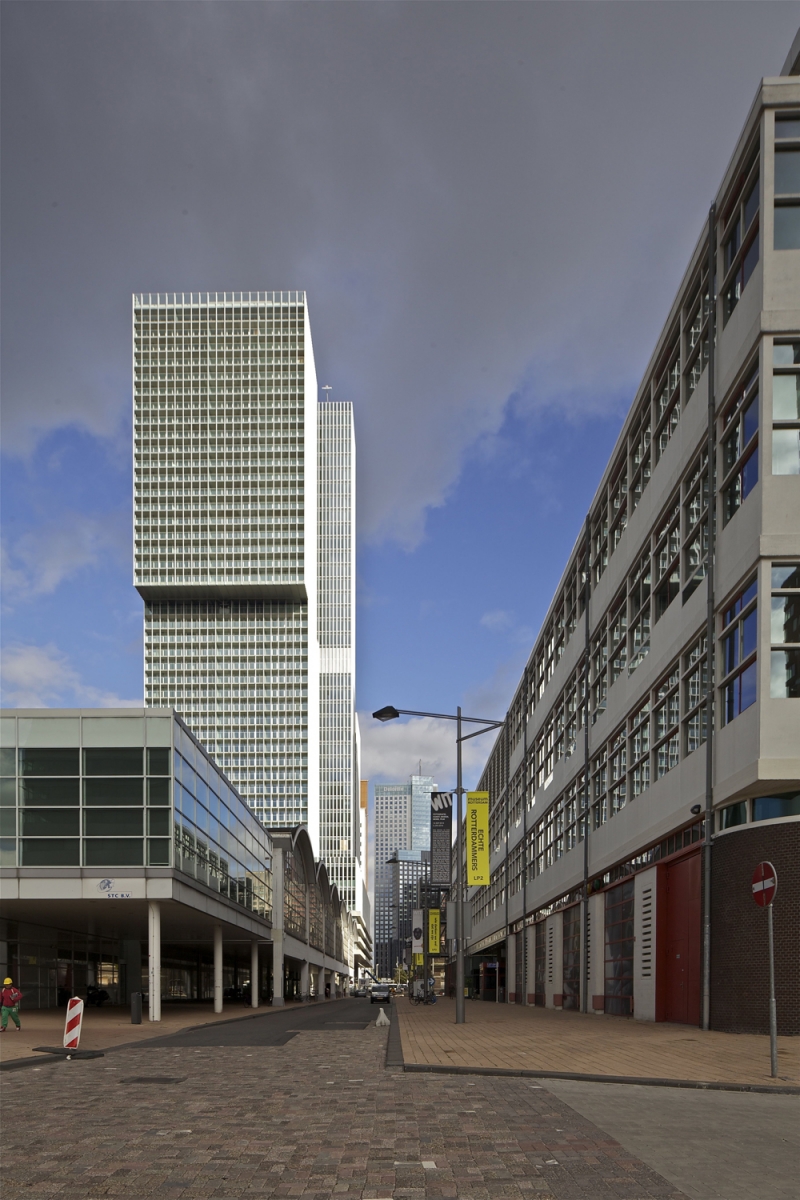 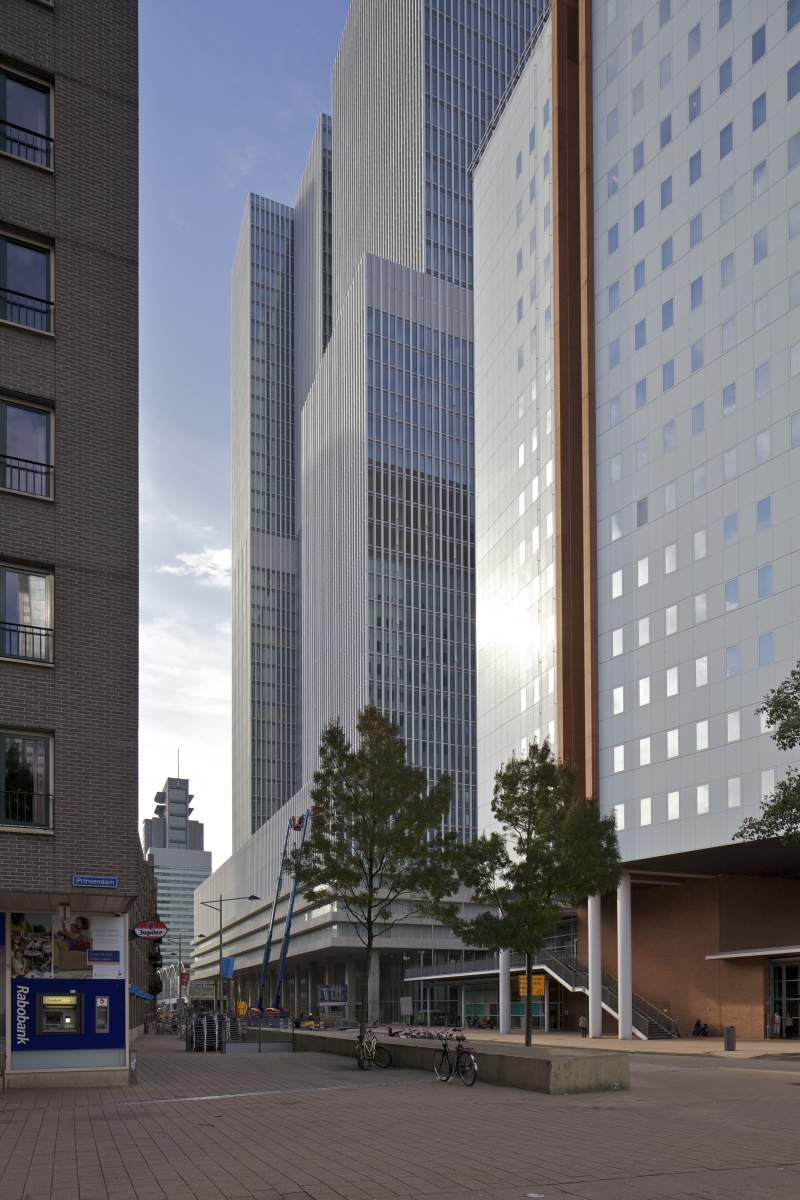 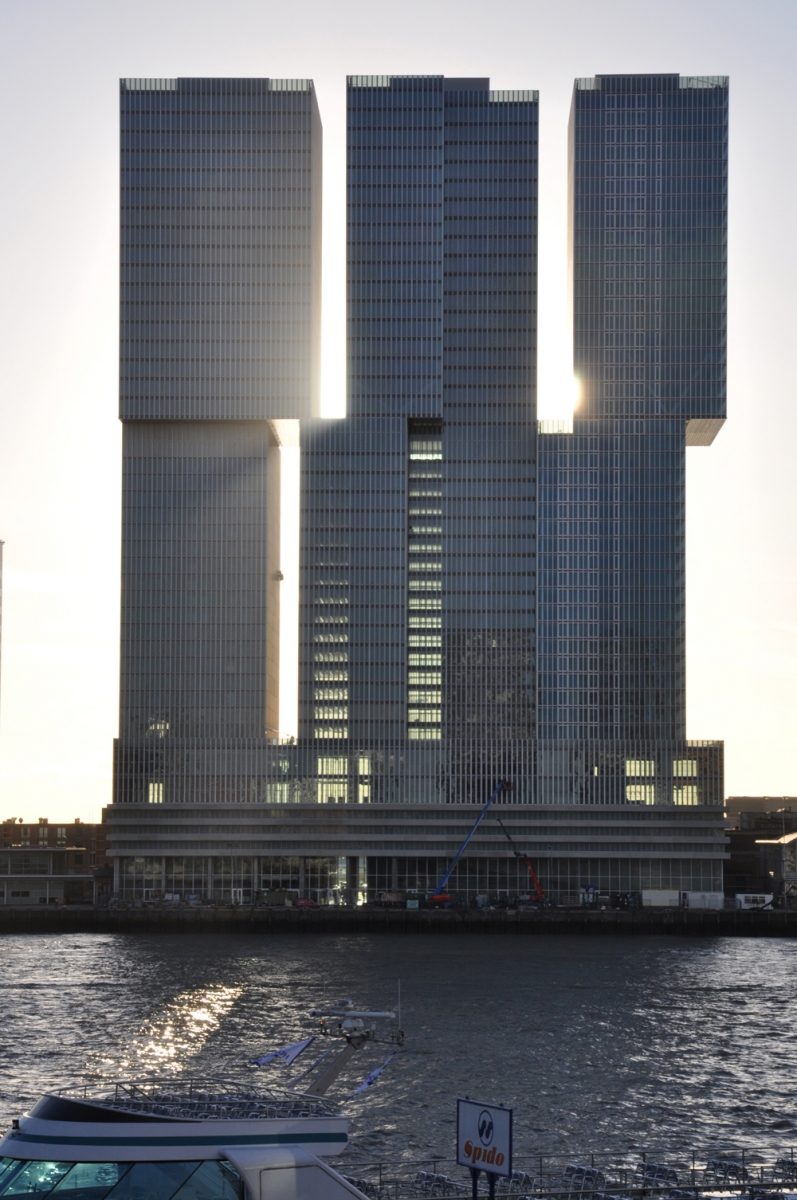