Poster Design by New York’s Noreen Braman, part of AIGA’s Get out the Vote 2008 campaign.

The Democratic National Convention kicked off in earnest this weekend, and while the media goes bonkers parsing every utterance from the Obama/Biden ticket, there is another conversation happening outside the convention hall that may prove equally as compelling. Dialog: City, an interactive arts event curated by Seth Goldenberg, has brought artists and designers from around the world to Denver for what’s been described as an “eco-system of cultural, civic, and creative investigations.” Exhibitions, concerts, architectural installations, symposia, and performances are scattered throughout the city with the aim of sparking a discourse among citizens and convention visitors. Nothing breaks the conversational ice quite like a rousing evening of political karaoke…

Dialog: City is nothing if not diverse: There’s the civic karaoke campaign, created by artist Daniel Peltz, where participants get to reenact political speeches. There’s South Korean designer Minsuk Cho’s Air Forest, a 10,000 square foot architectural pavilion located in Denver’s City Park. AIGA’s “Get Out the Vote 2008” poster collection takes over the lobby of the Denver Art Museum, while Shepard Fairey of OBEY fame curates the Manifest Hope Gallery and rallies enough musical talent to rival Coachella. D.J. Spooky competes with those karaoke singers with his Antarctic Suite: A Technology Opera. 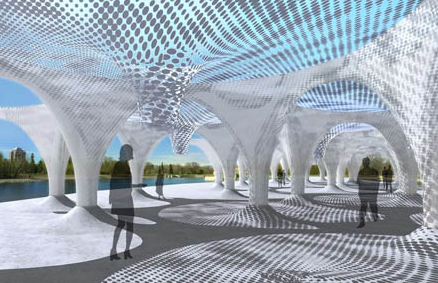 A rendering of Cho’s Air Forest. The pneumatic design creates a levitating structure.

Yesterday also saw the official opening of Partly Sunny: Designs to Change the Forecast, an exhibition and interactive event created by students and faculty from the Rhode Island School of Design. The team, led by RISD professor Charlie Cannon, arrived over a week ago to transform a former nightclub in the Denver Pavilions into a temporary gallery. The exhibition grew out of an Innovation Studio course taught by Cannon last fall. Students tasked with thinking about the designer’s role in mitigating global climate change were struck by an Op-Ed from New York Times columnist Thomas Friedman. “It is so much more important to change your leaders than change your light bulbs,” Friedman wrote.

“That inspired the students to engage in a national conversation in this election cycle,” Cannon told me on Friday as he and a team of 14 students put the finishing touches on their exhibit. “We wanted to highlight what individuals, communities, municipalities, states, organizations, were doing now that were responding to the impacts of climate change. We wanted to provide not a series of speculative explorations, but concrete evidence of action on the ground.” 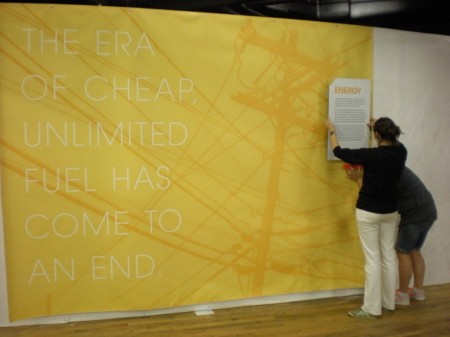 Above: Installing the exhibit. Below: The finished exhibition space. Photos from the Partly Sunny Denver Blog. 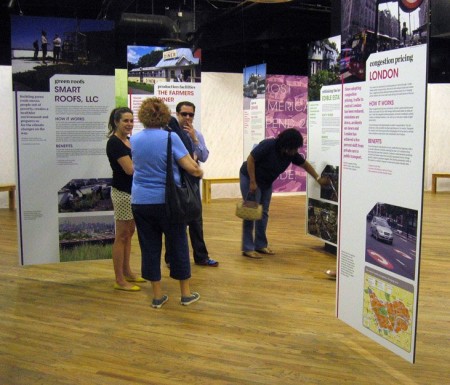 In addition to the exhibition, Partly Sunny engages participants in conversation and challenges them to take action. “We have always understood the physical exhibition to be a platform, but it’s not just a static thing,” Cannon explained. “We want to use it to have conversation, to lend momentum to other initiatives in the city, and ultimately, to contribute to a national conversation about these issues.”

To that end, students designed double-sided postcards where individuals can scribe their own actions (you can download your own PDF versions from their Web site). 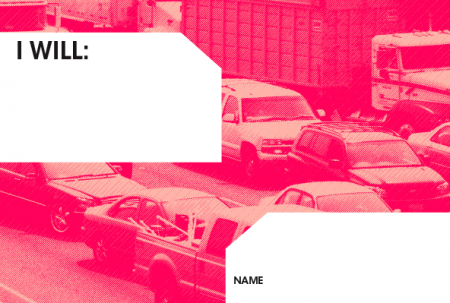 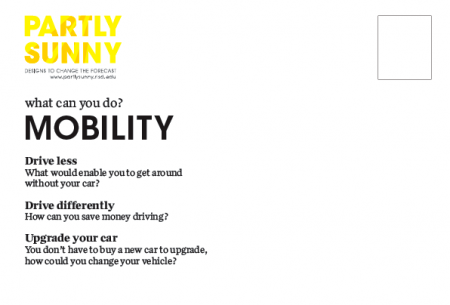 Visitors can write their postcards on a community table designed by RISD student Kallie Weinkle. The table is fabricated out of waste woods: remachined pallet wood as well as exotic and endangered African hardwoods that were retrieved from—I’m not making this up—shipping crates. 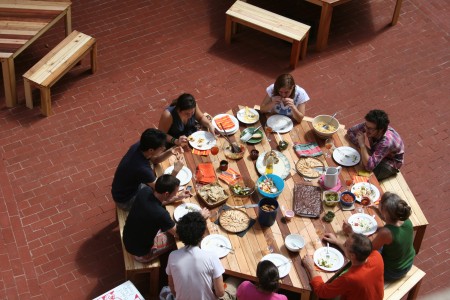 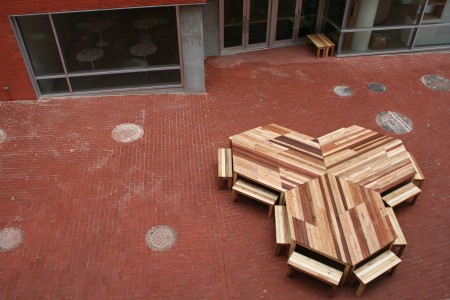 In addition to Partly Sunny, Cannon helped organize the Green Constitutional Congress, which takes place tonight at 6p.m. Moderated by Bruce Mau, the panel discussion will include Majora Carter, David Orr, Van Jones, William Becker, Peter Thum, as well as Cannon. Afterwards, all participants will gather to meet with the crowds and answer questions. Cannon says soapboxes will be set up for guests to climb aboard and talk about their own topics of interest. Some individuals will also be given video cameras to document the event.

I asked Cannon about this rise of the designer-as-activist and he told me that in his 10 years at RISD, he has seen the role of the designer increasingly merge with the practice of social justice. “There is a growing sophistication on the part of young designers and students in their definitions of what sustainability might mean,” he said. “When I began, it was more of a fringe position. People thought that they could not do well if they were doing good. Today, there are more firms that are making social activism and political commitments an integral part of their practice.”

And for more on that topic, stay tuned for the October issue of Metropolis…