Two Philadelphia University students successfully grow a lamp and a chair from mushrooms. 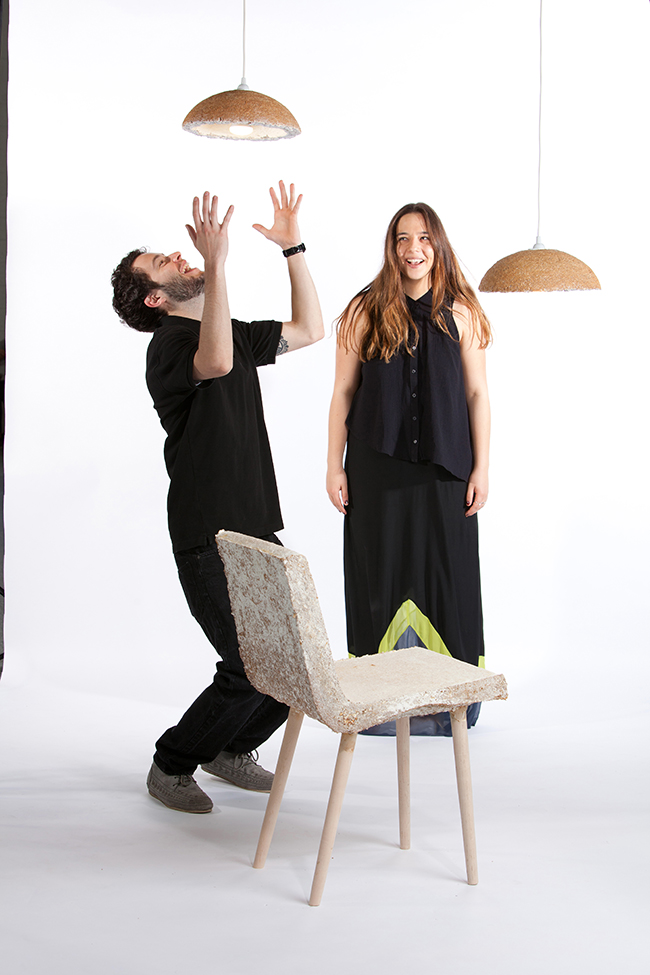 “Experiment” is the word that pops up, like mushrooms after a rainstorm, when Merjan Sisman and Brian McClellan describe their industrial design thesis project at Philadelphia University. At the beginning of their senior year, their goal was to design something from living materials. After deciding against a slime mold–based leather, they hit upon mycelium, which is essentially the roots of a mushroom. (Picture the weblike interior of a rotted log with mushrooms growing from the top.)

Mycelium’s advantages are numerous: It takes minimal energy; it’s made from renewable materials (mushroom spores and an organic substrate, usually agricultural waste); it’s ﬁre- and heat-resistant; and it’s completely compostable. But it’s also an unpredictable material to work with. Companies such as Ecovative are working to create applications for mycelium—mostly packaging to replace Styrofoam—but few designers have used it. Phil Ross, one who has, advised Sisman and McClellan: “Prepare for disappointment; it’s a science.”

Sisman and McClellan’s ﬁrst attempts at using mycelium—growing a chair and pendant lamps, respectively—were a mess. Contamination was a problem until they found experts in San Francisco who sold them sterile, premixed, ready-to-use bricks of mushroom spores and base material. But they still had to get conditions exactly right. “It was like a science experiment,” McClellan admits. “We started off trying to ﬁgure out how to change the properties of the mycelium, and then later we worked on structure and form. We found that more moisture and less air made a denser material,” he says.

The design itself was simple, because the product is grown in a mold, not manufactured. Sisman used a frame while the mycelium took root around her chair’s legs, but only to keep them straight; the fungal material is sturdy on its own. “Including the legs, there was no tooling or assembly needed,” she says. Once they got the density and design details down (after months of experimenting with mixing, molding, and drying), it was time to make their ﬁnal aesthetic decisions. They chose to keep mycelium’s colors and textures: “We wanted it to look like itself, not wood or metal,” Sisman says.

And then there was the waiting: three weeks for McClellan’s light ﬁxtures and a month for Sisman’s chair, including a week of drying and heating to kill the mycelium and stop growth—he used an oven, and she used sunlight. (On his ﬁrst go-round McClellan didn’t dry out his domes enough, and they started sprouting mushrooms at the very end of the process.) “It was a gamble to do this for our senior thesis,” Sisman says. But, she adds, “I made a chair from nature.”