Designing and Building a Pavilion: VI

300 sheets of aluminum being deliveredFour pallets, each containing 75 – 4×8 sheets of .050-inch thick mill-finished aluminum, and weighing together 6,844 pounds, would arrive at the loading dock of the Yale School of Architecture on a flatbed 18 wheeler long-haul truck. Or that was the intention before the truck driver tried to navigate New […]

300 sheets of aluminum being delivered

Four pallets, each containing 75 – 4×8 sheets of .050-inch thick mill-finished aluminum, and weighing together 6,844 pounds, would arrive at the loading dock of the Yale School of Architecture on a flatbed 18 wheeler long-haul truck. Or that was the intention before the truck driver tried to navigate New Haven’s narrow streets and ended just 100 yards away from his destination. Here, in the middle of Park Street, the pallets were unloaded just behind the school, keeping three lanes of through traffic occupied for a few minutes while our shop staff moved the tonnage with a forklift. 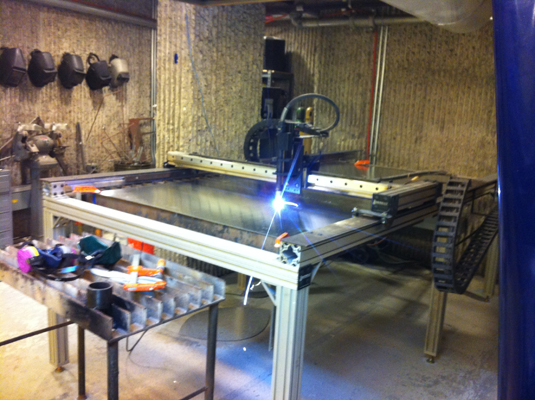 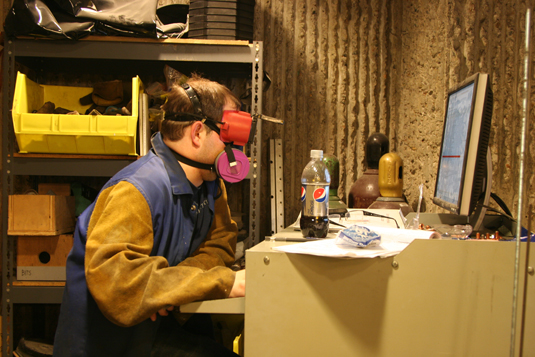 Eric Zahn at the plasma cutter

The school’s seven laser cutters serve as the indispensable tool for student model building, so the concept of cutting sheet goods from a CAD drawing became a natural production method for the pavilion. But in this case our machine is a bit different. We’re using the plasma cutter in the school’s basement shop, which sends an ionized gas charge through the material and is used for cutting sheet metals. Before the production process could begin, a series of test cuts were performed to calibrate the machine. The voltage, amperage, and cutting speed of the plasma cutter were optimized for the thickness of our aluminum. 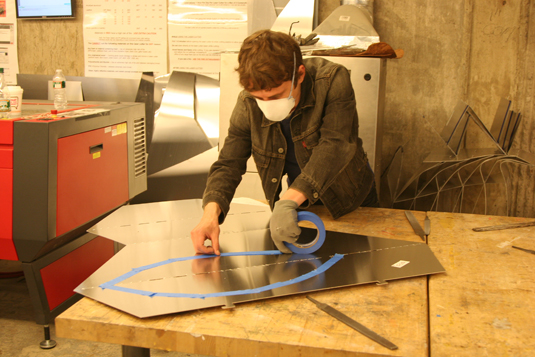 Labeling and masking each piece

Approximately 300 sheets of aluminum are being cut on the plasma cutter. At 15-25 minutes a sheet, an efficient process is required in order to meet our deadline. Eric Zahn is the man behind the machine, having spent the time to understand the idiosyncrasies of the proprietary tool-pathing and cutting software for the plasma. The sheets are held down by only a few clamps on the cutting bed. Eric operates the machine wearing a welder’s jacket and eyewear to protect against the ion discharge from the cut. As soon as a sheet is cut, a team labels each piece (by brick, component, direction, and number), compiles the scrap for recycling, and loads a new sheet on the bed. The individual pieces are then marked for painting and exposed edges are filed to a smooth finish. 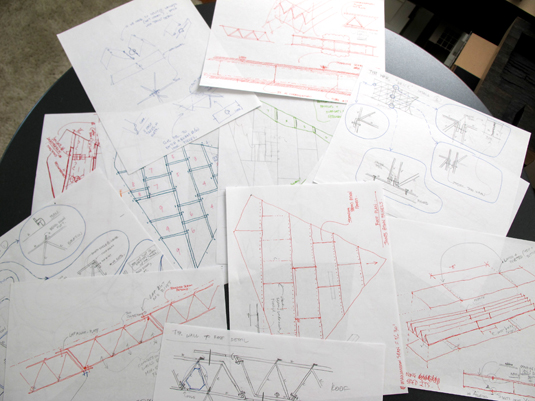 Sketches of connection and assembly details

David Bench is a recent MArch II graduate from Yale, having entered the program in 2010 after four years at Richard Meier & Partners.  In the same year, he completed his first independent design-build project, a loft conversion in Brooklyn.  David received his B. Arch. from the University of Texas at Austin in 2006, where he was awarded the Oglesby Traveling Fellowship upon graduation. David is a registered architect in New York.