Q&A: Drexel Professors on Teaching the Art of Collaboration

The URBN Center is a radically reconstructed interior on the Drexel University campus in Philadelphia, in a building originally designed by architect Robert Venturi.

As you pass through the glazed entry into a forest of exposed building systems, the scent of linseed oil is in the air. Open tread, wood stairways float up through a thicket of steel beams, bolts, wires, pipes and shut-off valves. 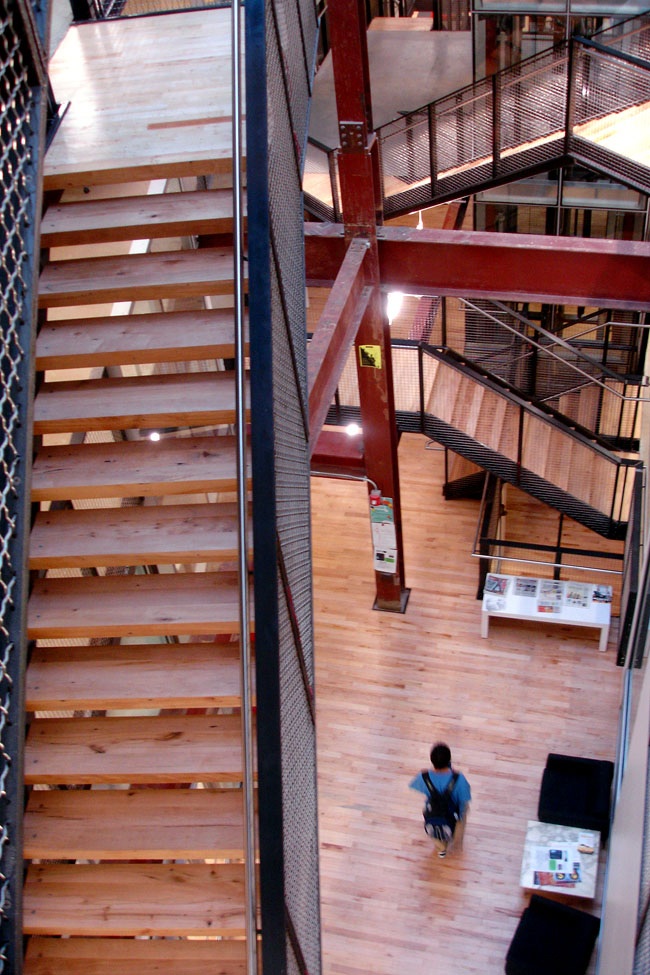 “It’s labyrinthine,” professor Max Zahniser, sustainability expert, observes. We zigzag upstairs, ascending levels of glassed-in rooms to his design seminar. Seems to me that the architects were striving to promote the collaborative flow of ideas. “I think they did their job a little too well,” Zahniser responds.

We tend to assume that design collaboration is intrinsically valuable, easy as apple pie to initiate and implement. Pardon the analogy but it’s not unheard of to have things turn out half-baked.

When we last left you…15 design students, comprising three interchangeable teams, had embarked on a research project. The Grays Ferry neighborhood in Philadelphia has three small traffic triangles with potential for greening, building community involvement, and improving traffic patterns. Students tracked massive quantities of energy loss in the neighborhood. By conserving and generating energy from their individual stations, perhaps the triangles could prompt a new green traffic network throughout the city…

Sitting down with co-teachers Zahniser and Mat Lutz, architect and third year Ph. D. candidate in Ecology and Evolutionary Biology at Princeton, I wanted to delve into the challenges they face, what it means to teach collaboration. Their course, “Sustainability in the Built Environment,” focuses on disciplined, collaborative research in sustainability, preceding design.

The two teachers themselves have been collaborating in what Zahniser jokingly referred to as “an arranged marriage.” The accepted wisdom, in some cultures, is that there is a reasonably high success rate for arranged marriages. 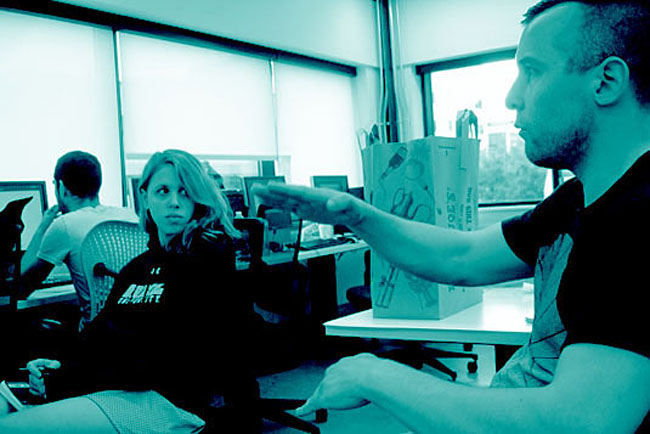 “It’s been really successful,” says Lutz. Students themselves have told Lutz that it’s “nice to be able to shift gears, have a different dynamic” as they float between pre-established study sub groups. Zahniser feels they’ve been, maybe, 70% successful. The remaining 30% of the course outline needs to be re-tooled for subsequent semesters.

Young students can sometimes exhibit insecurity about their own skills and personalities that can make them less than open to the wonders of collaboration. Both Lutz and Zahniser alluded to lessons in group dynamics, human ecosystems, that played out this time. In group gatherings, Lutz thinks we often see democracy as the default result. It is probably more like Lord of the Flies we concurred, especially without an enforced substructure of “dynamic governance,” as Zahniser calls it, to break the automatic fallout of personality types.

Zahniser utilizes a counter measure, a “talking stick,” such that each person, one at a time, is guaranteed their say.  Group accountability–who’s working harder than whom–has a bearing on perceived success as well.

We focused on possible future enhancements to this collaborative seminar:

Joseph G. Brin: Would it, perhaps, be feasible to have a community member formally incorporated into the teaching team?

Max Zahniser: As a resident, I, technically, am part of both the teaching team and the community. Yes, I think at times wearing my community member hat in discussions was important to informing the decisions with that perspective. I’d love to work it out so that we had even more community engagement than just myself always being there, and having the three points of interaction with Grays Ferry/SOSNA  members throughout the term (kick-off presentation was at SOSNA, mid-review, and final crits).

Mat Lutz: We had a pretty high level of involvement from the community as is. The danger in engaging someone at every single step of the process could be that it might stifle design  ideas / process. It’s the same thing in working with a client – the last thing you want is to  have a client sitting in your office, looking over your shoulder as you are making design decisions. The students need to learn how to distill ideas and present them in a coherent way to stakeholders after they have been at least somewhat developed. 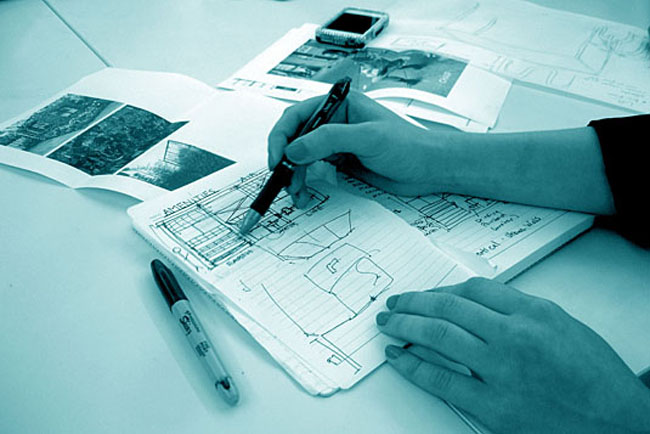 JGB: Given what you know about human group psychology what guidance would you offer to another teacher taking on your course?

MZ: Make sure you’ve got a pretty diverse tool-kit for group facilitation, and for discovery, target assessment, goal setting, information communication, and collaborative design. These are all terms that most designers will intellectually validate, but very few actually know how to do.

JGB: How about naming one thing that was particularly successful in the course this time?

ML: The most successful thing was the fact that each group produced a project that none of the individuals on the team could have come up with in isolation. This doesn’t necessarily mean that these outcomes were “better” than what they could have come up with individually. But the fact that the group outcomes were different and unexpected is definitely what we were going for.

JGB: Something that was unsuccessful?

ML: When it comes down to the actual production and design phases, I think the collaboration is still not working 100 percent. Part of this is a function of the tools that we use as designers, especially with respect to software. The students still seem to see the design process as a solo act (for example one person works on the model).

This will continue to change as technologies for design collaboration develop further and as the students become more proficient with these tools. In most of the groups, one student seemed to take on the role of doing most of the production work, which is exactly what we were trying to avoid. We need to strategize about ways to encourage more sharing of files, etc., and also to work on methods of design collaboration that do not rely on one person sitting at a computer.

Of course, the main problem in achieving really high level design outcomes in a course like this is the fact that this is a seminar class [vs. design studio]…really just an issue of time constraints.

I still think the students produced a tremendous amount of work, most of it very sophisticated, especially the research and analysis. It would have been great if they had another week or two to tighten up the designs before the final.

JGB: Speaking of time constraints, your course is classified as a minor. Should sustainability be a major?

MZ: I don’t think so. Sustainability is a word for a condition, which is indefinitely maintainable. Through the lens of systems theory and an understanding of humanity’s interdependence with all other life on Earth, it becomes about how humans can meet their varied and multitudinous needs in ways that at the very least support the vitality of life, if not contribute to greater and greater vitality in those living systems.

An academic major is an area of focus, usually a specialization of some kind. Sustainability I think should be moving toward a ubiquity of understanding, and thus should be included in all majors. It should be core, and should impact how we think about and practice, our specializations. The goal is to become increasingly integrative, serving higher and higher order- nested, whole systems. 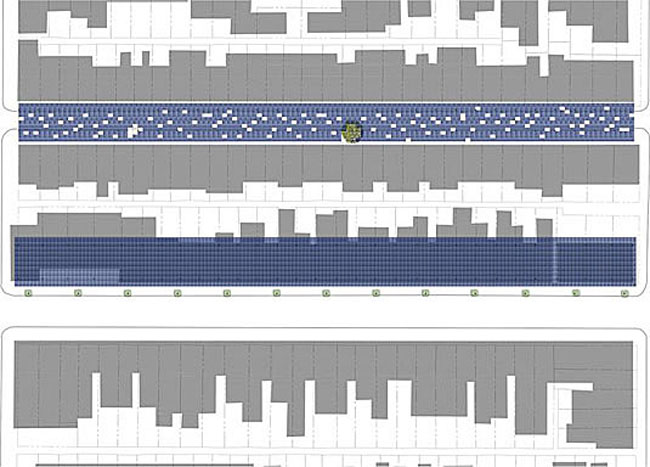 JGB:  In a class such as this could you actually build something beyond pie-in-the-sky speculations?

MZ: Pie-in-the-sky ideas are really important to invest in (mental energy investment at least) also. But yes, I think there’s also as much or more value in some aspect of the work actually being implemented.

All three groups have things that could be implemented, and some will, I suspect. The neighborhood has developed some resources that might actually get distributed and a design could be mocked up pretty easily somewhere. The Site group’s design is probably a five-figure project, which puts it beyond reach for SOSNA, but not for some relatively small grants.

JGB: Is anyone responsible for strengthening ties to Grays Ferry after the course ends?

MZ: I think that probably comes down to Andrew Dalzel [head of SOSNA community association] and I. But I’ve heard a lot of the students expressing an interest in moving to the Grays Ferry area and I hope that there are some lasting relationships and intertwined futures there.

Joseph G. Brin is an architect, fine artist and writer based in Philadelphia, PA. He has just completed writing and illustrating his first graphic novel on infamous gangster Al Capone.