Ear to the Ground

Photos: Bureau for Open CultureDrivers delayed by the red light on the corner of East Long and North Washington Streets, in downtown Columbus, Ohio, may hear more than just the hum of idling vehicles. If they crack their windows this winter, they are likely to catch a disembodied voice emanating from a nearby parking lot. […]

Drivers delayed by the red light on the corner of East Long and North Washington Streets, in downtown Columbus, Ohio, may hear more than just the hum of idling vehicles. If they crack their windows this winter, they are likely to catch a disembodied voice emanating from a nearby parking lot. “Parking lots,” the voice asserts. “It’s what we are. We should preserve them. They’re cultural property.”

This suggestion arrives courtesy of Audible Dwelling, a temporary installation of two houses designed by Learning Site, a collective made up of Denmark’s Rikke Luther and Sweden’s Cecilia Wendt. The capsule-like structures act like an oversize stereo, amplifying a 15-minute-long narrative—written by the British theorist Jaime Stapleton and read by the Berlin-based artist Cassandra Troyan—loudly enough for anyone in about a three-block radius to catch an excerpt.

To understand why the artists would care to broadcast commentary on parking lots to idling commuters, it helps to have some background on the city’s recent history. “In Columbus there is a complex history of parking—asphalting over farmland, parking lots as slum clearance, and a lot of other issues in relation to land banking,” Luther says. Nowadays, approximately 25 percent of Columbus’s downtown is made up of surface parking lots. This rise accompanied a precipitous decline in downtown residents—from 30,000 in 1950 to just 3,500 in 2000, according to the local planner Andrew Overbeck, of MSI Design. The decrease was spurred by an influx of urban highways that improved accessibility in and out of the city center. An ensuing rise in commuter traffic encouraged downtown property owners to raze buildings in exchange for more lucrative parking lots. Even today, when Columbus’s residential population is finally recovering some of its previous losses (with an increase to 5,500 in the last decade), parking lots remain a precious commodity. 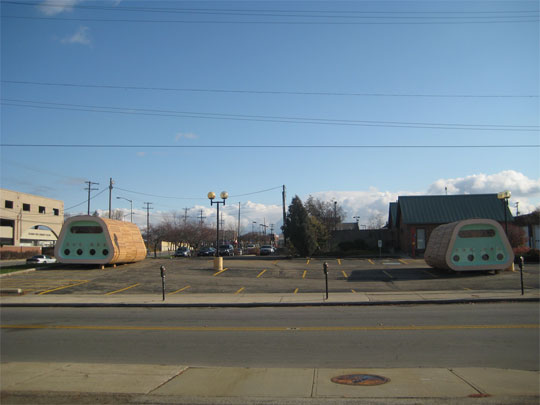 For Learning Site, this unique urban condition was an ideal subject. Its work thrives off critical analyses of local resources and economies; previous projects include a papier-mâché dome in Delhi, underground mushroom gardens in Singapore, a sea urchin-inspired structure in Tokyo, and a plastic-bottle dwelling in Monterrey, Mexico. The artists launched their month-long Columbus residency last October with a host of interactions among local planners, academics, and the central Ohio-based Consider Biking coalition. “One of the real values of having Learning Site in Columbus is that a number of people collaborate with them to build the project,” says James Voorhies, the director of Bureau for Open Culture at the Columbus College of Art & Design, who invited the collective to town. “They draw in local resources, not only material-wise but also skills to make the projects come to fruition.” 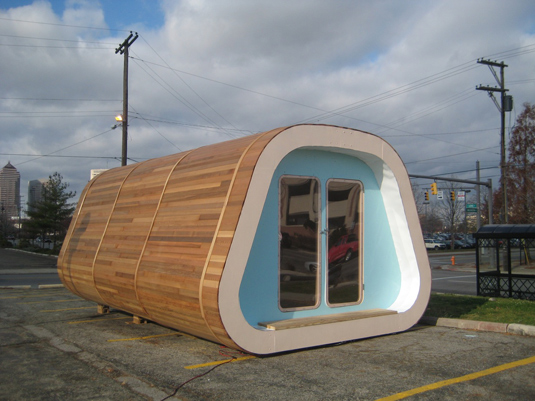 On February 26, Audible Dwelling will enter its next phase: broadcasting Chord of Columbus, an arrangement of ambient tones originating from a variety of local sources, including power transformers, air conditioners, construction sites, and parking garages. The work, realized by the Ohio State University professor Sarah Cowles and the local artist and musician John Also Bennett, will also include video projections onto the interior and exterior of the houses showing the origin and intensity of the sounds, among other data. “We hope our work can add to discussions and the awareness of a city’s ongoing and constant mode of changes,” says Learning Site’s Wendt. “And we hope the questions are not all about how long the racket will go on.”

Audible Dwelling will continue sparking debate in Columbus until the end of March, when the modular structures will be shipped to Copenhagen for a new broadcast tailored to site-specific conditions.