Lisl Close, the Twin Cities Architect With a Modernist Vision

252 Bedford Street SE, Minneapolis.  Built in 1938 for $7,643 for Ray Faulkner, E. Ziegfeld and G. Hill.  It is known as the Lippincott house and still stands. It is across the street from Frank Lloyd Wright’s 1934 Willey House. This is the first house Win and Lisl designed after going out on their own.Courtesy Tom […]

252 Bedford Street SE, Minneapolis.  Built in 1938 for $7,643 for Ray Faulkner, E. Ziegfeld and G. Hill.  It is known as the Lippincott house and still stands. It is across the street from Frank Lloyd Wright’s 1934 Willey House. This is the first house Win and Lisl designed after going out on their own.

On a hot June afternoon, dozens of us gathered to celebrate what would have been Elizabeth Scheu Close’s 100th birthday. The first woman architect in Minnesota dedicated to a Modernist aesthetic, Lisl, as everyone called her, died at the age of 99 on November 29, 2011, a day when the design world lost a little of its buoyancy, a little of its tenacity.

The memorial at the First Unitarian Society on Mount Curve in Minneapolis, was just down the street from one of the largest of the over 300 homes she and her architect husband, Winston Close, had designed. The chamber ensemble Artaria String Quartet performed. After all, Lisl and Win were accomplished amateur musicians, playing the cello and viola, respectively. In between compositions by Mendelssohn, Mozart, and Hayden, friends, family and historians fleshed out her life with flourish. Words like “remarkable,” “skilled,” “brilliant,” and “disciplined” resonated.

Although Lisl was near legend in the Twin Cities design community, I did not meet her until the fall of 1997.  Win, her husband and professional partner of nearly 60 years, had died that summer. At age 85, Lisl instinctively commanded the space around her. She was a force of nature. Petite, she stood straight, was articulate, flashed intelligence and light animated her eyes. I knew instantly she did not suffer fools lightly—if at all. 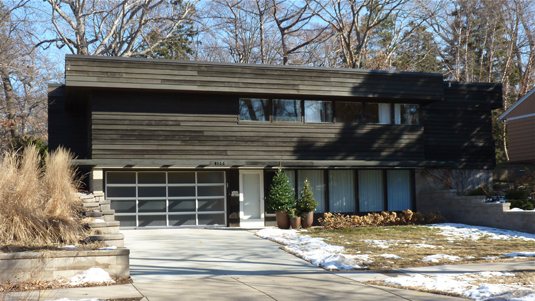 Lisl’s life was indeed storied. More than one person has commented that “she seemed to have it all”—great lineage, talent, professional acclaim, a respected husband, three accomplished children, and a passion for creativity and travel.  On June 4, 1912, she was born Elizabeth Scheu into a cultured and politically progressive family in Vienna, Austria. Her grandfather, Josef Scheu, was a co-founder of the Austrian Social Democratic Party and composed one if its best known anthems, the “Song of Work.”  Her father, Gustav Scheu, was a lawyer and city councilor who was aligned with the Garden City Movement and active in Vienna’s post-WWI housing reform movement. Her mother, Helene Scheu-Riesz, was a writer, editor, and publisher of children’s books, and a Quaker.

Gustav, an intellectual, commissioned Adolf Loos in 1912 to design the family home; the now celebrated Scheu House, which still stands. The first flat-roofed house in Vienna and Loos’ first terraced residential structure, the Scheu House was a destination point for left-leaning intellectuals who arrived from across Europe and the United States. Studying architectural history in college I was riveted by the Scheu’s austere design set-off by ivy covered walls.

That Lisl pursued architecture in college is not surprising. But after two years at Vienna’s Technische Hochschule she found the instructors sexist and unpleasant. She then applied and was accepted to Massachusetts Institute of Technology. Gustav’s friend, Edward Filene of Filene’s Department Store, paid her passage to Boston where she received her BArch in 1934 and her MArch in 1935. It was in graduate school, where she was the only woman in the program, that she met fellow student Win Close, a native of Appleton, Minnesota.

After graduating, Win quickly secured a job at the Minneapolis firm of Magney and Tusler but it was not so easy for Lisl.  Architecture firms determined she would be a distraction.  Richard Neutra agreed to hire her, but only if she paid him $20 per month. Finally Philadelphia architect Oscar Stonorov hired her to design public housing. 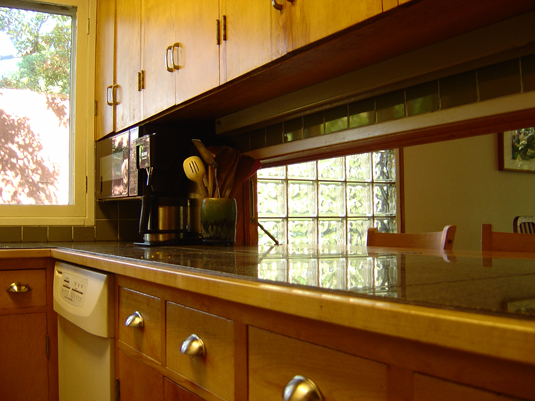 Kitchen at 1564 Fulham, built in 1939 for Tracy Tyler.  This is the first of 14 homes Lisl and Win designed for The Grove.  Currently owned by the Deen family. Photo by Colin Kloecker

In 1936 Win called with news of an opening at Magney and Tusler; she applied, was hired and moved to Minneapolis. Two years later Lisl and Win started their own firm, first Close and Scheu Architects, later Close Associates, Inc., owned by architect and principal Gar Hargans since 1988. (As an architecture student at the U of Minnesota, Gar first worked at Close Associates in 1965.) Three months later they married over their lunch hour, heading directly back to the office because there was work to do. (It has been noted that she would rather not have married, but in 1938 Minneapolis it would have been scandalous to live and run a business together.) Following war duty in the Navy, the U of M hired Win to teach architecture and be the in-house campus advisory architect, which he did until 1971. This left Lisl as principal designer of Close Associates, and she thrived.

Dedicated to a no-frills Modernism, Lisl and Win’s design practice included homes, public and private housing projects, medical facilities, and the Gray Freshwater Biological Institute on Lake Minnetonka, in Navarre Minnesota. Their structures are characterized by flat or gently sloping roofs, generous amounts of wood countered by brick or cinder block, an abundance of glazing, open floor plans and an obvious functionality. Free from ornament, Lisl once quipped, “I don’t do pendentives.” (Pendentives are the triangular, structural/vaulting elements in the corner of a room that usually support a dome on top.  Think Hagia Sophia.  Or a baroque dining room.) A Close home was also an affordable home.

Lisl constantly visited her construction sites, wearing a hardhat and sturdy shoes. She gained the contractors’ respect immediately, but it was rumored they were secretly terrified of her. In 1969 they were both elected Fellows of the AIA—he first husband-and-wife team so honored. In 2002, at 90, Lisl received AIA Minnesota’s Gold Medal, a lifetime achievement award.

1586 Burton Avenue, The Grove, near U of M Saint Paul campus.  Built in 1959 for John Wolf.  First images is from the early ’60s and sourced from closehomes.org, the second is the same room now, photo by Tom Trow. Owned by nationally known satirist Dudley Riggs and Pauline Boss.

In early 1998 I visited Lisl at the home she and Win had designed for themselves in 1953. Located in The Grove, a University of Minnesota enclave of winding roads near the Saint Paul campus, all Grove homes had to be architect-designed and were for faculty and staff. The Closes designed 14. A two-story, flat-roofed structure built into a gentle hillside, the home was constructed of redwood, glass, brick and cinderblock and is a blueprint of their Modernist aesthetic. Entering a ground level foyer of redwood paneling, one ascends a steel spiral staircase made by Win (the Scheu house has a spiral staircase) to the second floor living space with views of lawn and gardens through a long wall of large windows. Here they raised three children. One, the landscape architect Bob Close, now lives in the home with his wife. 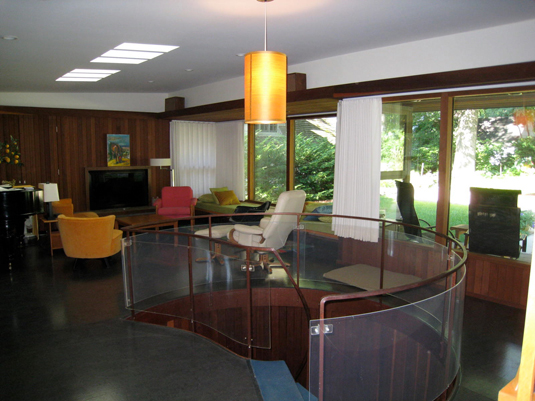 On this first of several visits, I was stuck by the grand piano in the living room. I asked if it was from the Scheu House in Vienna. With a piercing look she inquired why I asked.  I answered that I remembered it from photographs of the Scheus’ Richardsonian interiors in architectural history books I studied in college.  She said “yes,” with just a slight nod of approval. She gave me a thorough tour of the home and in a second bedroom; her cello and Win’s viola lay next to each other on twin beds. 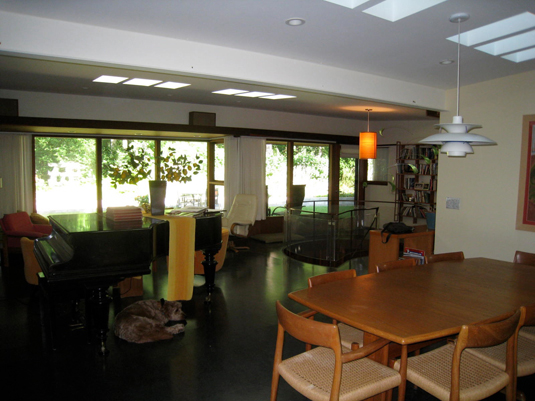 Interior, 1588 Fulham, The Grove, Saint Paul, Lisl and Win Close’s home, designed in 1953. The piano is from Lisl’s childhood home in Vienna, the celebrated Scheu House by Adolph Loos

That summer, I drove Lisl to Skywater, an ensemble of two cabins, originally designed for the University of Minnesota English professor, Joseph Beach and his wife Dagmar, who had christened the cabin Skywater. I was writing an article about the place and its furniture for the Saint Paul Pioneer Press. More than an hour’s drive from the Twin Cities, we had time to chat. Designed in 1941, Skywater is a two-room, sod-roofed cabin perched 150 feet above the stunningly beautiful St. Croix River on the Wisconsin bluffs. The Beaches had given the Closes $1,200 to design and build the cabin, and threw in another $50 for furnishings, all to be completed over the summer while they were on sabbatical at Harvard.

Undaunted by only $50 for kitchen items, bedding and furniture, Win and Lisl designed and constructed a game/dining table, stool and chair from fir plywood. The chair backs were strung clothesline. (Reproductions of the furniture can be purchased through the Minnesota Historical Society.) Nearby a second cabin on stilts was built in 1963. When the Beach family decided to sell Skywater in the early 1970s, they offered it to Win and Lisl who could not refuse.

Lisl and Win on the deck of the Skywater cabin overlooking the St. Croix River Valley, Wisconsin.
Courtesy the Close Family

At Skywater, the canopy was so dense the river could only be imagined far below.  After the newspaper photographer left Lisl told me—instructed me—to make the descent and take a swim on that hot August day.  She handed me a towel and told me to go skinny-dipping if I’d forgotten my suit, which she had told me to bring. I protested lightly, but with a wave of her hand she said, “I don’t get to be here alone very often.”  Off I went. Swimming in the cool clear water, looking up at the blue sky, I thought of Lisl growing up in the Scheu house some 80 years earlier and that now she was on the Skywater deck overlooking the St. Croix River valley.  Some life.

At the close of Lisl’s memorial gathering, with a little coaching, we stood and sang—some of us in German—Josef Scheu’s “Lied der Arbeit” (“Song of Work”), with words by Josef Zapf.  Of the original ten versus, now only the first and last are usually sung. The final verse ends, “So call out: ‘Work, it preserves, it’s work that moves the world!  Three cheers for work!  Three cheers for work!’” Indeed, Lisl Close had work down. Afterwards, with glasses raised, we toasted the first woman architect in the Twin Cities with a Modernist vision.

Mason Riddle is a Saint Paul based writer on the visual arts, architecture, and design. She has contributed to many publications including Architectural Record, Artforum, Elle Decor, the Minneapolis Star Tribune, and Walker Art Center Magazine. She is former director of the MN Percent for Art in Public Places program, and former Interim director of The Goldstein Museum of Design. Since 2002 she has been an adjunct team member at the Saint Paul on the Mississippi Design Center.