Stored Potential, Emerging Terrain’s 2010 debut project, adorned 13 silos of an abandoned grain elevator outside Omaha with 20-by-80-foot graphic banners around
the themes of land use, food, and agriculture.

On the outskirts of downtown Omaha rests a hulking, 800-foot-long grain elevator—the kind that was once a familiar sight throughout the Great Plains. Despite having been abandoned years ago and encroached upon by Interstate 80, which shuttles 76,000 commuters between Omaha and the state capital of Lincoln every day, the massive concrete building has been deemed too costly to demolish. So there it stands, for years on end, perhaps out of mind, but never out of sight.

During countless trips past the iconic structure, Nebraska native Anne Trumble saw something beyond the thick silo walls. In 2007, while still commuting once a month from her job at a landscape architecture firm in New York City, Trumble visited a friend whose back deck had a view of the grain elevator. Over a bottle of wine, they came up with what would become a large-scale public art competition, ultimately called Stored Potential, to repurpose the curved exterior facades of the silos.

Through her Omaha-based research and design nonprofit, Emerging Terrain (established in 2010), Trumble issued a call for designs which would be featured on banners to adorn 13 of the silos. Addressing the themes of land use, food, and agriculture, the result was statement-making art, printed on polyester mesh banners, 80 feet tall and 20 feet wide. Up-lit at night, the banners transformed the derelict structure into a super-size, drive-by art gallery.

Soon after, Emerging Terrain took it a step further. One warm fall day it invited people to get off the interstate, out of their cars, and up close and personal with the grain elevator, making it the backdrop for a multicourse, gourmet meal served up by Omaha’s finest chefs. A single, continuous table ran the length of the grain elevator—hundreds of feet long—bringing the inaugural banner topics to life. “It’s what makes us so peculiar—we actually engage people in the built environment,” Trumble says. “The grain elevator defined us as a public art organization, rather than an initiator of larger public projects, which is what we’ve worked to become.” 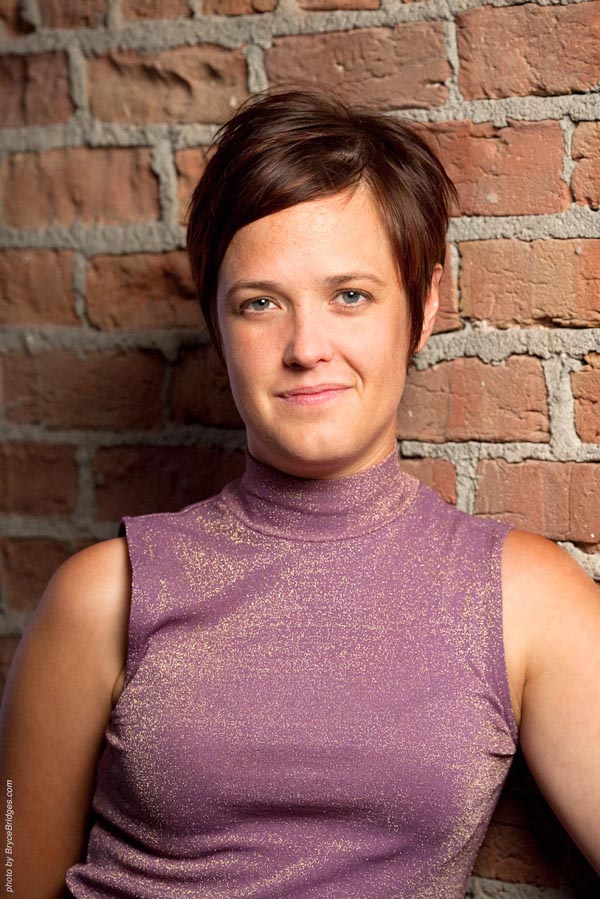 Trumble’s family roots date back well over a century in what is now Sarpy County, population 160,000. She grew up on a 250-acre farm, once far from commercial development. “We watched it come at us from all four sides,” Trumble says. “I remember when I could see the first golden arches from my bedroom window in the early 1980s. Then it became ‘the edge’ of the city throughout the 1990s. Our house and farm are now somewhat of a relic in the middle of the suburban city, long passed over by the city.”

Around the time Trumble was 12, a team of Walmart attorneys visited her humble family home, pressuring them to sell. Farmers, like her family, effectively have two options in the face of such pressure: sell to a larger industrial farm, big-box store, or housing developer—or hold out. Equally committed to farming and conservation, her parents have resisted repeated calls to sell, while development now has them cornered from three of four sides of their farm. “One of my most vivid childhood memories was when Highway 370 was doubled in size from a beautiful, treelined, two-lane highway. It was the first time I thought about the development forces around us and what they really meant.”

That awakening, combined with enormous public interest in the grain-elevator project years later, paved the way for another conversation-starting initiative called Shifting Thresholds. The three-part project combined oral history, extensive aerial photography, and a deep historical look at land-use changes over the past 150 years. When it came time to start community engagement, the group had difficulty finding a workshop venue, so the members created a project trailer and, Trumble says, “drove it around to big shopping centers.” 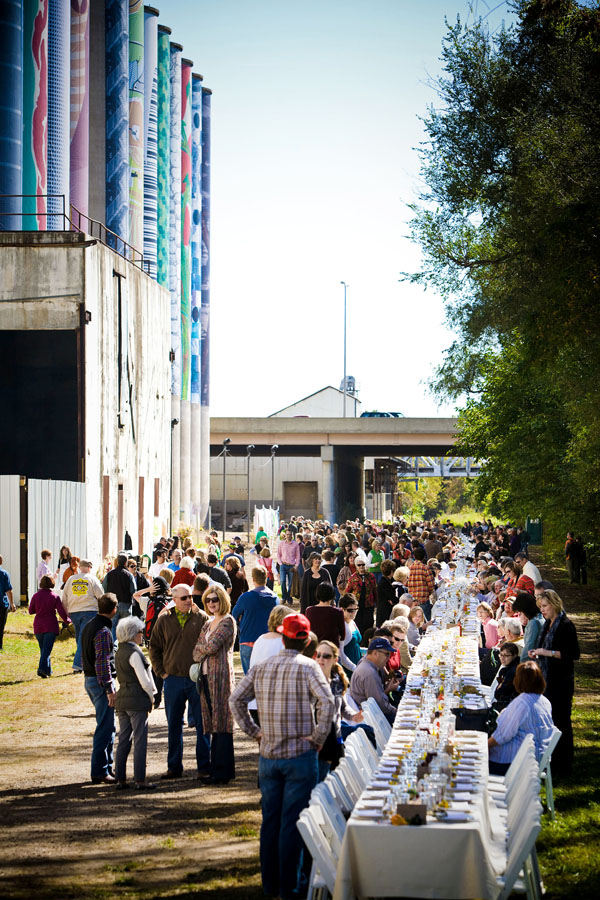 In conjunction with the Stored Potential project, the group joined with ten top local chefs, more than 40 local farmers, and dozens of volunteers to serve a five-course meal to 500 people seated at an 800-foot-long table, running the length of the grain elevator.

“Emerging Terrain’s approach is fresh because they focus on the urban/rural interface, which isn’t a static place, it’s continuously moving,” explains Dave Sands, executive director of the Nebraska Land Trust and a participant in Shifting Thresholds. “Our concern is that if we keep pushing those boundaries out, we’re going to lose the rural.”

Emerging Terrain conducted 50 interviews with community residents, each one done while the interviewee was driven around the countryside. The group mounted a camera in the car and collected each resident’s comments as they passed through old farms and new developments. Sands had never done anything like it, but the experience clearly made an impression; he credits the experience with directly informing his organization’s successful pursuit of a $1 million grant through the Nebraska Environmental Trust to protect a 700-acre farm in Sarpy County from being swallowed by development.

Bordered by three rivers on the east, west, and south sides, and abutting Omaha, Sarpy is the least populated county in the state, but it’s growing quickly. “We found Emerging Terrain’s work fascinating in how it visualized the county’s evolution from agriculture to a professional/retail-type of community,” explains Wendy Richey, president of the Sarpy County Chamber of Commerce. “We like to look at facts, figures, and data. What they showed us was truly visionary. They accomplished something that has been lacking on the industrial side of things, where we often focus primarily on economic impact.” Shifting Thresholds and the body of work it has come to represent was recently adopted by the University of Nebraska’s Rural Futures Institute, which intends to launch a regional design competition to advance the concept.

The Shifting Thresholds project, which also charted the course of suburban development in the farmlands outside Omaha, involved extensive aerial documentation by photographer Alex MacLean.

When Trumble returned from New York in 2010 to run Emerging Terrain full time, she took stock of similar organizations across the country. “We looked to groups like Public Architecture in San Francisco, the Design Trust for Public Space in New York City, and others for the strategies and tactics, which we then tested,” she said. “We’ve tried design competitions, research, and alternative design visions.”

Affirming the success of the grain elevator project in its multiple iterations, Trumble says “site-specific, pop-up events probably work the best of anything in Omaha. We use them to get people out to parts of the city that they barely knew existed.” Alternative design proposals have also been successful in building support. A case in point is the organization’s Belt Line project, seeking to revive Omaha’s old industrial—and now derelict—rail corridor, which runs right past the grain elevator and straight through the middle of the city. “The Belt Line aligns all the major education, health-care, and job nodes, while linking Omaha’s predominantly African-American north side with the predominantly Hispanic south side,” she explains.

In June, Emerging Terrain pulled together a dynamic team of young designers to publicly hash out how the corridor could be recast. Through the involvement of roughly 500 community members, the group arrived at a plan for a “multi-mobility corridor,” combining light rail and trail. The idea quickly gained a lot of political support and was picked up by the Associated Press and published in dozens of news outlets across the nation.

“What Emerging Terrain has done with the Belt Line as well as their other work is long-range and visionary,” explains Omaha city planner Jed Moulton. “Most municipalities don’t have the resources to engage in that kind of thought. Emerging Terrain does an amazing job of facilitating community engagement while combining it with compelling branding and imaging. The advantage Anne has is that she’s unleashed. She can really dream big. It’s tough when you’re in a public position, reined in by bureaucracy. You don’t have that liberty.”

Emerging Terrain is now wrestling with the dilemma of whether and how to move beyond the scope of banners, parties, and pop-up projects. “Since there is little to no actual design discourse in Omaha, beyond large corporate engineering firms, the challenge is to keep the community’s interest in these larger, more intelligently positioned initiatives,” she says. “We’re at a critical moment in figuring out whether we’re the entity that continues to develop these projects, or whether they turn into spin-off organizations, while Emerging Terrain continues to be the progenitor of change.” It’s clear that Omaha, like many cities, needs both.