Firehouse No. 1 Puts the Needs of Firefighters First

The product of a public-private partnership, Firehouse No. 1 puts the needs of firefighters first. 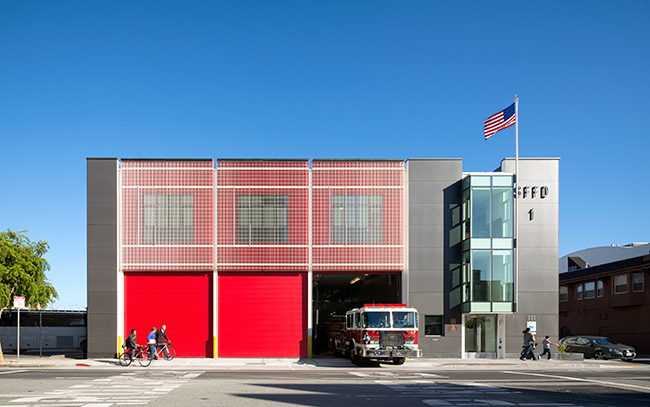 Bill Leddy had to put in poles. Four brass poles, to be precise; they connect the second-ﬂoor sleeping quarters of the new San Francisco Firehouse No. 1 to the three apparatus bays (as the parking spots for ﬁre trucks are called). The poles’ location had to be as precise as
the ten-second count that ﬁreﬁghters have between the moment the alarm rings and the moment they need to be ready, dressed, and in their trucks.

How did Leddy and his team at Leddy Maytum Stacy Architects, who had never designed a ﬁrehouse, ﬁgure out all the incredibly speciﬁc needs of this building? They did what they do for every project: research, talk to people, and consult. One of the people they consulted with was the assistant deputy fire chief Ken Lombardi, who came to a neighborhood meeting “with his full brass buttons,” (while the architects wore their typical black); much of the research was into the legacy of ﬁre stations as architectural icons (think Zaha Hadid’s mostly unworkable ﬁre station at the Vitra headquarters) and the necessity for this building to both function and represent.

Firehouse No. 1 is a unique structure for two reasons: One—it is the result of a public-private partnership, developed by the San Francisco Museum of Modern Art and gifted to the city of San Francisco in exchange for land near the existing museum that will be developed into a brand-new Snøhetta expansion. Two—it is the ﬁrst ﬁrehouse to be built in the city in four decades.

“They’re sentinels of the community,” Leddy says of the ﬁreﬁghters, who occupy the 52-bed facility in 72-hour shifts. “We purposefully avoided overly expressive elements because we wanted to honor the kind of forthright work of the owners of the building; these folks risk their lives every day.” That forthrightness translates into a structure with machine-like efﬁciency, constructed out of a variety of lightweight materials like cement-board panels and galvanized-grate screens that give privacy to the sleeping quarters for the inhabitants and a striking moiré effect to passersby on Folsom Street. Those screens hang from projected bay windows that further explore the sentinel idea, allowing “the ﬁreﬁghters to step out on two ﬂoors and look up and down the street,” Leddy explains.

Of course, this being the West Coast, the building is also resource-efﬁcient, designed to use 40 percent less energy than a typical ﬁrehouse in the United States. A solar water-heating system provides most of the build-ing’s hot water, and the architects found solutions to the ﬁre ﬁghters’ major occupational hazard: the time spent in toxic environments. That meant a decontamination shower space and a focus on providing a light and airy environment for them to recover in—until the next time they have to slide down those poles.