Photos: Cristina Naccarato/Broken City LabJust across the river from Detroit sits a city forgotten. Battered by the fall of the auto industry and struggling to keep its economy running, Windsor, Ontario, has seen some tough times in recent years, and things aren’t likely to improve any time soon. It has the highest unemployment rate in […]

Just across the river from Detroit sits a city forgotten. Battered by the fall of the auto industry and struggling to keep its economy running, Windsor, Ontario, has seen some tough times in recent years, and things aren’t likely to improve any time soon. It has the highest unemployment rate in Canada, a plummeting population, and the empty storefronts and foreclosed homes that have come to define this generation’s Great Recession.

Though geographically south, Windsor’s been called the Detroit of the North. For some locals, it’s simply a broken city. But there’s a growing movement that believes Windsor is a city that can be fixed.

A group of artists, activists, and urbanists has come together in Windsor with the straightforward-yet-complex goal of repairing the city. Their group is called the Broken City Lab, and it meets weekly to collaboratively dream up ways of engaging the community in a conversation about Windsor’s future.

To encourage civic engagement, they’ve embedded temporary messages in blocks of ice, designed magnetic planters that can hang on chain-link fences, and issued a report on options for re-using empty retail space. Led by Justin Langlois, an artist and an instructor at the University of Windsor, the group’s been meeting for about a year and a half, and it documents its work and ideas online.

Like Detroit, Windsor’s economy depends heavily on the American auto industry. GM, Ford, and Chrysler have all run factories on the Canadian side of the Detroit River, but many of those jobs evaporated. Despite being separated by a river and an international border, the economies of Detroit and Windsor are closely linked. They’re often thought of (by Windsorites, at least) as part of the same regional entity. “Windsor, in some senses, is highly dependent on the future of Detroit, because we’re going to be affected by it, whether we like it or not,” Langlois says. “But on the other side, I don’t think Detroit really reacts or necessarily changes so much based on what’s happening in Windsor.” 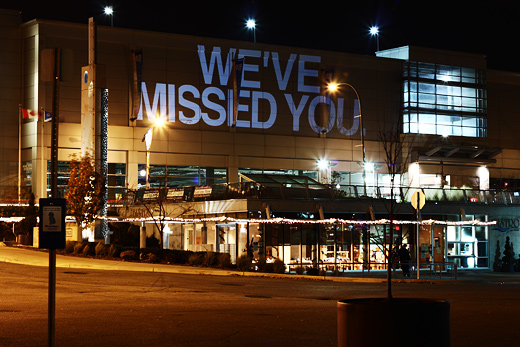 To try to emphasize the two cities’ interconnection, the Broken City Lab recently conducted an urban intervention they call the Cross-Border Communication project. They turned a riverfront parking structure into a screen onto which they projected a variety of community-building phrases. Over three nights, phrases three stories tall filled the side of the building, big enough to be seen in Detroit, 2,500 feet across the river.

We’re in this together.

We Need To Talk.

The phrases scrolled across the facade or sat still for minutes at a time, beckoning the neighboring city, the relative economic powerhouse in a region with a busted economy. “We weren’t necessarily sure at any given time who was over there or if anyone was receiving the message,” Langlois admits. “In some ways that almost speaks to the relationship between the cities.”

Even in the unlikely event that nobody in Detroit saw the projections, the Broken City Lab is already planning more cross-border communications for the spring. Langlois hopes it gets the conversation started—at least on his side of the river.

Related: In “Welcome to Detroit,” Elizabeth Evitts Dickinson looked at a group of graphic designers hoping to effect positive change in the Motor City (and set off a passionate debate in our comments section).