Gehry’s Eisenhower Memorial Not Dead, Yet

Despite claims from the opposition, the architect’s memorial design is still alive.

A multiple choice question: What is the status of Frank Gehry’s controversial, embattled design for the Eisenhower Memorial, in Washington? Is it: A) Alive and Kicking; B) Dead; C) Dying; or D) Stuck in Political and Bureaucratic Limbo? Earlier this month Justin Shubow of the rightward-leaning, classical architecture-loving National Civic Arts Society (NCAS), answered with a what might be called a less-than-gentlemanly C, in a commentary in Roll Call entitled “It’s Time to Bury Frank Gehry’s Eisenhower Memorial.” The design—according to Shubow, who has waged a one-man war against the proposed memorial—is so hopelessly flawed that it needs to be put out of its misery once and for all.

Shubow is wrong, and his screed is more wishful thinking than reality. In fact, this week the Gehry team presented altered plans to the US Commision of Fine Arts, with some half-dozen modifications on view. Despite the changes, which were restricted to the landscape portion of the design and added 74 trees to the park, the memorial’s fundamental components remain in place, a defiant gesture sure to further rile up the opposition. Still, several commissioners expressed their approval of the newest revisions. And, in a bit of good news for the project, a study testing the durability of the design’s much-panned metal scrim curtains came back positive. Gehry partner John Bowers issued a statement saying that the metal alloy specified by the architects was proven to have “superior corrosive resistance.”

So the $140-million scheme clearly isn’t dead, yet, but it is most definitely stalled. According to spokesperson Chris Kelley Cimko, the Gehry design is still alive (as the latest presentation attests to), but needs approvals from both the US Commission of Fine Arts and the National Capital Planning Commission, two organizations that oversee work on the Mall. And, perhaps most ominously, this year’s Congress refused to fund the first phase of construction, opting instead to provide enough money to, in her words, “keep the lights on.” If the Eisenhower commission hopes to keep the design alive, it must now raise additional private money in the hopes that progress on that front will prompt next year’s Congress to fund the memorial.

In standoffs like this in the private sector, a stalled project is often just one step away from being a dead one. A similar dynamic might be developing here. Although the Commission of Fine Arts gave preliminary approval to the design, there has been turnover on the board recently, so final approval might prove harder. To further muddy the waters, President Obama recently appointed Bruce Cole, an opponent of the design and a member of the NCAS, to the Eisenhower Memorial Commission. When I asked Cimko how Cole’s appointment might affect progress, she replied, “He’s a new member of the commission, and we welcome him, but he’s missed twelve years of work.” At this week’s presentation, Cole’s disposition didn’t exactly inspire confidence. Reacting to the latest plans he told the press, “My feeling about this is that the larger issues are not trees, but whether they will ever get enough appropriated money to build this thing.” 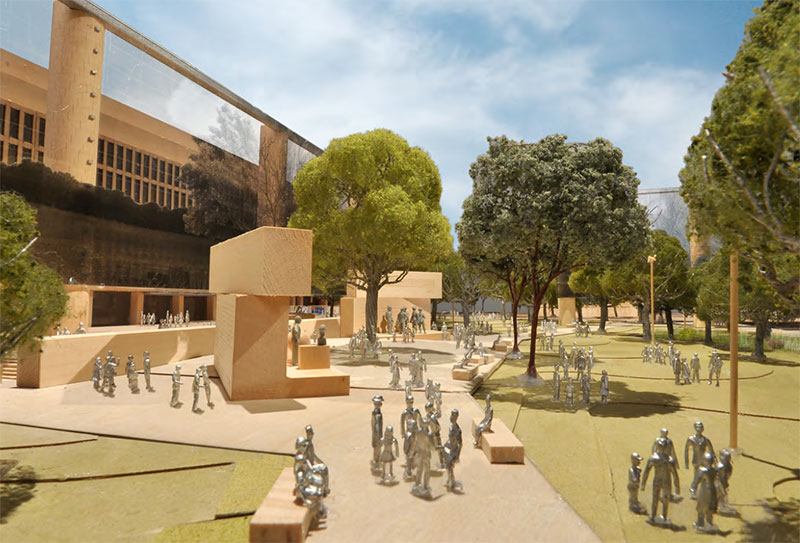 A view of the a previous iteration of the Eisenhower Memorial design. The latest redesign further emphasis the memorial’s ambition to create a splendid “urban park” at the foot of the Capitol.

The proposed memorial has, somewhat surprisingly, come in for a fair amount of abuse from respected critics, including Robert Campbell of the Boston Globe, who at one point wrote: “It’s way too big. It’s too cartoony. Someone should scrub the design and start over.” I think Campbell is one of our best critics, but don’t agree with him here. The Gehry design, while far from perfect, is an ambitious one. It attempts to accomplish three things (which is one or two more than most memorials tackle): commemorate the life and accomplishments of our 34th president; transform a large, awkward site at the foot of Capitol Hill; and tell the story of Eisenhower, through a series of huge metal tapestries arranged to create both a living narrative and an urban park. You might quibble, or even hate the details, but you have to concede that this is an audacious approach. We can argue about the particulars (which presumably would be open to further revisions), whether we think it’s too literal or too big, or even “too cartoony,” but Gehry’s design fully engages the site. (Even Campbell conceded that in an otherwise scathing review.) To his great credit, Gehry refused to plop a statue in the park: a safe approach that would please many (including perhaps the NCAS, as long as it was classically styled) and presumably gain swifter approval, but would almost certainly be forgotten days after the opening ceremony.

And let’s be honest about the quality of the other memorials designed in recent years. Can anyone tell me what the Korean War Memorial even looks like, or where it’s located on the Mall? Ever been to the FDR Memorial? The new Martin Luther King Memorial, despite a spectacular site, is largely considered a dud. And don’t get me started on the World War II Memorial, which during the design phase was once famously described by Paul Goldberger as “warmed over Albert Speer.” The completed memorial is nothing more than a large and bombastic pass-through.

Ironically, the only successful memorial on the Mall from the past three decades is the most abstract: the Vietnam Veterans Memorial, which of course was bitterly opposed by the cultural right at the time. Now I am not comparing the Gehry design to the Vietnam Veteran’s Memorial—one of the great works of the 20th century—but I do think they share a similar ambition, a sense of daring and engagement that’s largely missing from conventional approaches. And what exactly are groups like the National Civic Arts Society proposing? A few years ago they sponsored an ideas competition for an alternate vision for the Eisenhower Memorial. They came up with a kind of faux Arc de Triumph/Washington Square arch that, in my mind, approaches parody. So, if you’re asking me to choose, I’d take flawed-but-ambitious Gehry over generic statues in the park or, even worse, the stale classicism being offered up by the likes of the NCAS.