Is There Such Thing as “Feminine” Design?

My ongoing research on the role of women in the American residential furniture industry has introduced me to many different perspectives—they all demonstrate the fortitude of women in the workplace. My recent interview with Jay Reardon, president of Hickory Chair, shed some critical light on the male perspective on women in the industry. “I don’t even think about gender when I am hiring people for a job,” Reardon told me. “I just like to match the right talent with the right job and don’t judge people on their gender.”

Though things seem to be changing for the better for women in the industry, real change may take a generation or two for us to populate top leadership positions in numbers equal to men. Recently, several women have been promoted into top merchandising and creative director positions, and only two into C suite jobs.

Reardon has put women in top positions as sales representatives, creative directors, vice presidents, and marketing managers. Jan Whitson, Hickory Chair’s merchandising manager says, “None of us walk around here with the ego of a title. Jay is just Jay, even though he is president.” Remember the Harvard Business School study that showed women making 95% of decisions for the home? Jay addressed the consumer part of the equation by adding, “In our Hickory Chair University, I would say that out of 40 attendees, over 30 will be women. These women are trained as interior designers, working with customers, and demonstrating the value of our products. This is important because we are high-end. Men will pay $500 for a golf driver, but they don’t see the value in paying $1,000 for a chair.” Jay stressed the fact that he is seeing more couples making decisions together and that women will be drawn to the aesthetics of an object, whereas men are drawn to its construction and functionality. This begs a deeper question of whether furniture should necessarily be designed by women, for women. Does it matter? 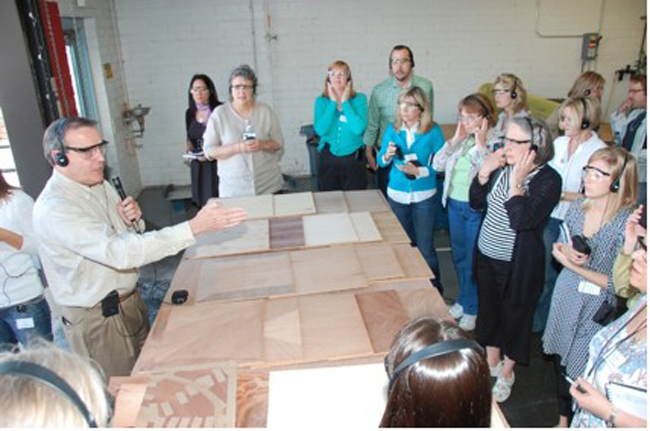 Reardon and I discussed the fact that women develop three of his top-selling licensed collections: Alexa Hampton, Mariette Himes Gomez, and Suzanne Kasler. He doesn’t feel that these ladies are necessarily designing for women, but simply developing excellent designs. Looking back to great furniture designers of the eighteenth century – some argue it was the golden age of furniture design—we see all males. Thomas Chippendale, Duncan Phyfe, Thomas Sheraton, George Hepplewhite, Charles Honore Lannuier, to name a few, all created designs that could be considered as feminine. This fact lead Reardon and me to conclude that perhaps it is more important to think of successful design as being based on great principles of beauty, rather than on femininity. Could it be that beauty more readily accords with a feminine sensibility rather than the female gender?

When I ask interior design scion Alexa Hampton to share her views on how she thinks of gender in her own process, she responds with refreshing candor. Although her New York office is staffed entirely by women, this is incidental rather than intentional, echoing the refrain of Jay Reardon. Of her classical designs, she said, “I have sort of a butch sensibility as I like classicism, which is now making me avant garde. I don’t do frilly flourishing details.” Of her first experience at the High Point furniture market with her famous father, Mark Hampton, she recalls, “I first went to the furniture market with my father when I was eighteen. We stayed at the old Raddison downtown—the only hotel then—and it was full of men. I was the only female. They were all smoking and drinking a ton, and it really scared me. There were no women in the showrooms except for receptionists and this made me nervous.”

Things are changing, she noted, “Now, we are everywhere on the streets. We are buyers, merchandisers, and interior designers. We are making the decisions about what goes into stores now in greater numbers.” Yes, the scene is changing, yet the fact remains that we have not really tapped the glass ceiling with titled positions of leadership.

Alexa works closely with the Hickory Chair furniture designers to bring her collections to market. I spoke with a top female furniture designer and professor at Kendall College of Art & Design, Monty Simpson who has designed several collections for me at Kindel, and before that, Baker Furniture, and has freelanced for top companies such as Century. Monty is as knowledgeable as any man on materials, engineering, construction, and design history. Because she is a 20-plus year veteran, Monty’s perspective on women in the industry is less reactionary and a little tougher than the young designers coming up today. 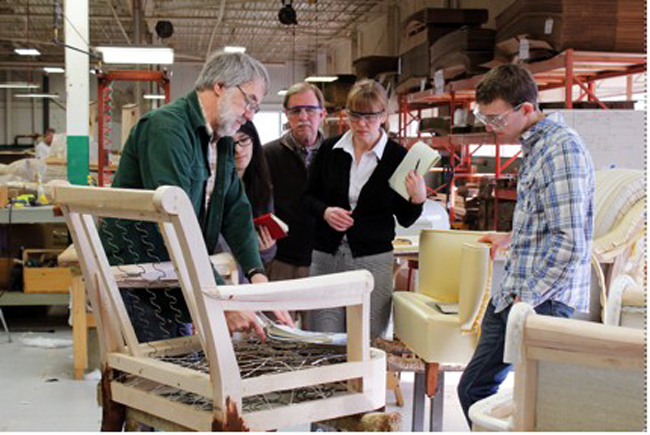 She claims that her biggest challenge has been earning the respect of male industry veterans. “In manufacturing, there is the stereotype that men know more about machinery and engineering. In addition, there is camaraderie among men in the industry and women just don’t fit in these situations. When women are around these situations, men are not able to speak freely,” Monty explained. She advises young female designers to develop a thick skin and to project confidence.

Some recent female grads are shocked when they enter the industry known for its Mad Men-like treatment of women. I recall countless times, in the 1990s, when I was called   ”honey,” “baby,” “sweetie,” and “dolly” by chain-smoking, martini-drinking men in their offices! Because I am an historian, my survival tool for this behavior was nostalgic charm. “They have to accept that they will have a difficult time socializing with the veterans, but need to keep expanding their base of knowledge,” Monty says.

Monty argues, as do I, that design schools should be teaching more about the way the industry really works. “Kendall has a course called Industry Trends which includes business practices on marketing, sales, and design trends,” she said. “We tend to teach more of the industry processes than other schools and all of our graduates enter the workplace with strong, diversified portfolios and skill sets.”

Opportunities for designers to study in the field need to be expanded in order to demonstrate the workings of the industry. Simpson advocates such opportunities and cites how difficult it is for women, particularly outsiders, to rise among the ranks of the industry, “By making important industry connections for students while they are learning, we can help them navigate their careers better.”

It seems that future female leaders in the industry must navigate between the claims of not paying attention to gender in hiring, and the traditionally closed fraternal order.

Paula Scott Fogarty holds an M.A. in art history from Savannah College of Art and Design and served as a leader in the furniture industry for 20 years. In her many roles at Kindel Furniture, including president, she led the sales, marketing, design and operations teams and with them, developed the most successful programs for the company.  Paula also ran a successful marketing and communications firm, Paula Scott Unlimited, and is now a freelance writer on the arts and the role of women in the furniture industry. She is the past chair of the board of the David Walcott Kendall Memorial Foundation and president of the Irish Georgian Society Board of Directors. Paula lives in Savannah with her Jack Russell terrier, Charles.