A preview of the Pérez Art Museum Miami before it opens this week at Art Basel.

Miami’s new art museum, the Perez Art Museum Miami (PAMM), opens on December 4th. The subtle building, designed by the Basel architecture firm, Herzog & de Meuron, isn’t exactly what you’d expect from a city that produced the Mediterranean Revival, Art Deco, Morris Lapidus, and Arquitectonica. Though notable mid-20th century architects have developed a uniquely Floridian Modern repertoire, as seen in the work of Chad Oppenheim and others, Miami’s architecture is better known for its whimsical charms and flash. The city may, in fact, have the highest concentration of LED-lit color-changing buildings outside of Las Vegas. The PAMM, on the other hand, is downright contextual, almost eager to disappear into the Miami cityscape. 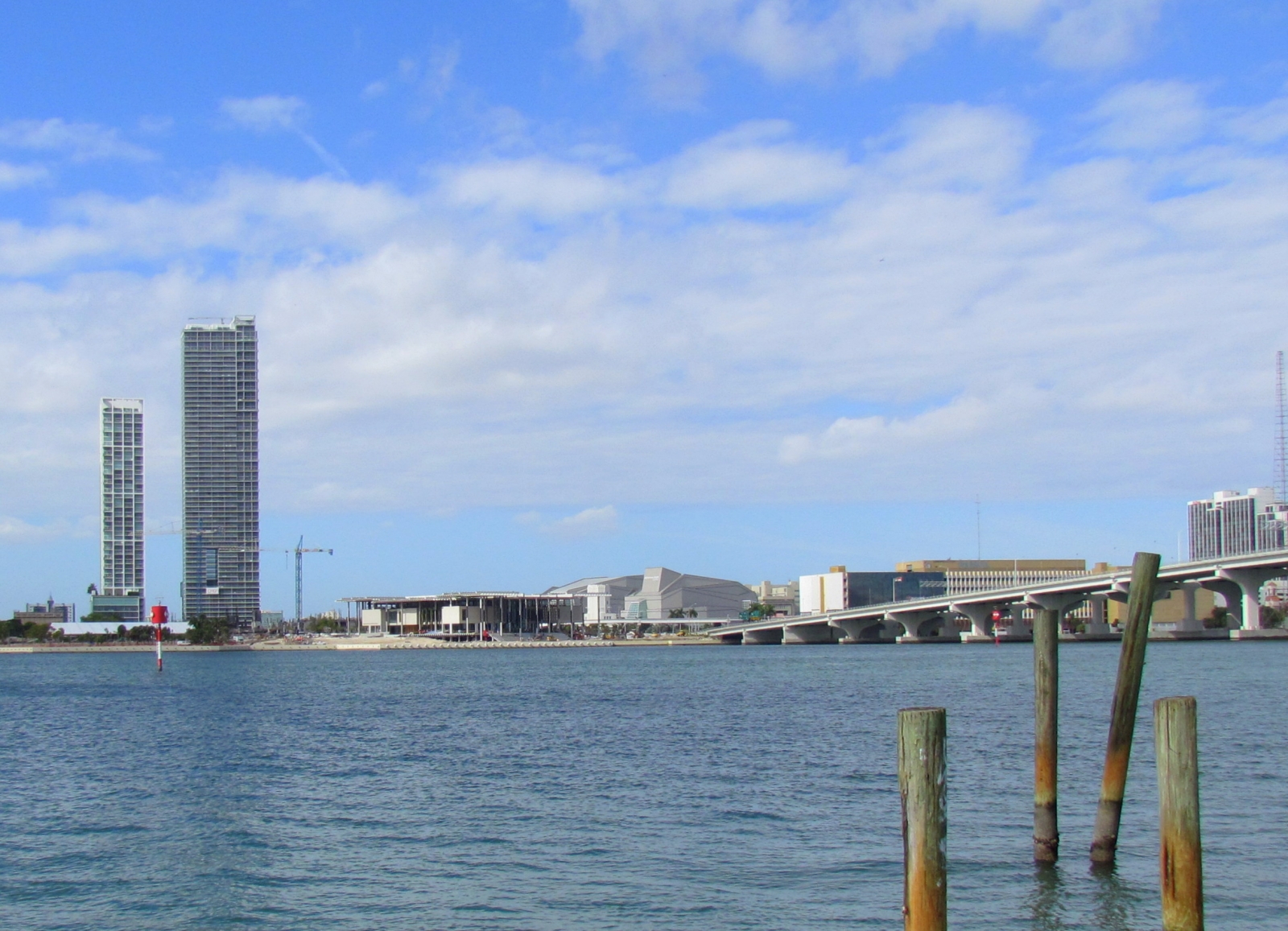 The three-story building is organized in a series of box-like volumes that seem to hang from the pergola canopy that covers most of the structure. The canopy is the project’s most important design element and recognizable feature. It hovers above the relatively simple mass of the building, giving it an organizational scheme. The pergola loggias’ well-calculated urban and human scale defines spaces that integrate the architecture seamlessly with its surroundings.

Located on a site that faces the bay, the neighboring Bicentennial Park, and two major thoroughfares (Biscayne Boulevard and the MacArthur Causeway), the building provides the introspection required for art viewing while still establishing a distinct connection to its context. Ample surrounding terraces offer expansive views in every direction. Towards the bay the terraces create a feeling of being on deck of the cruise ships that leave daily from the Port of Miami and steam through Government Cut canal (just southeast to the building). Successfully blurred boundaries create a continuous sense of space, as if museum, canal, and bay are all one. The terraces continue on the south façade, where they connect with the greenery of Bicentennial Park and Miami’s growing downtown skyline. In the other elevations the terraces are more sparing, sheltering the building from the busier and noisier areas they face. 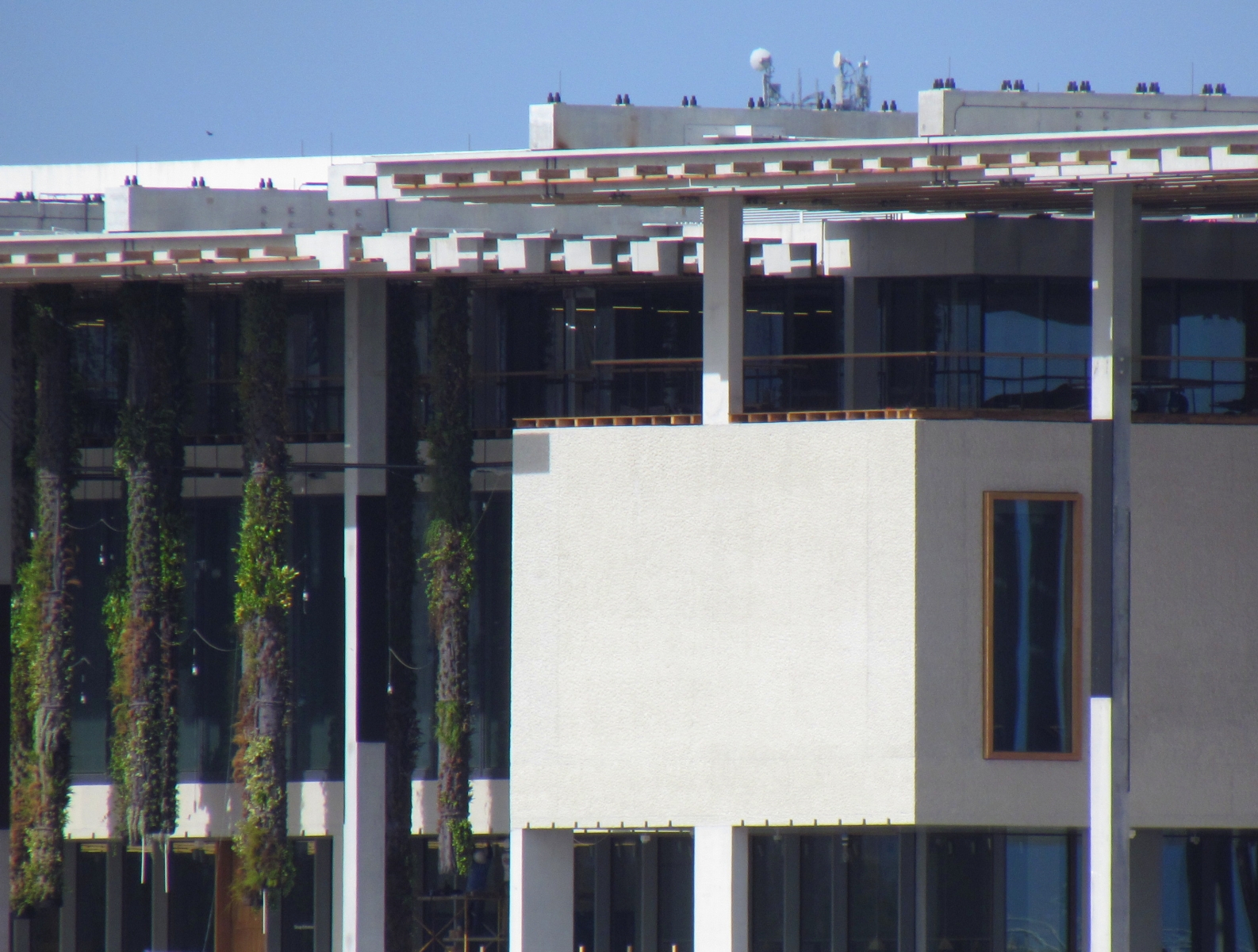 The museum consists of floating boxes pierced by tall, slender columns that support the pergola roof.

The perforated pergola also functions as climate protector, screening out the sun and helping to cool the building in its sub-tropical South Florida setting. But the pergola’s importance is more than merely utilitarian; the shading provided by its grid beams bathe the building in a beautiful chiaroscuro effect that softens its volume with a poetic light.

Inside the generously sized galleries balance the showcasing of art and views of the appealing outdoors, without one interfering with the other. The glass, white walls, wood floors and concrete mullions combine to create a proper background for the artwork and simultaneously create a cozy setting in spite of the grand scale. Galleries of different functions, the auditorium, and other public areas flow easily into one other, with a fluidity more natural than the exterior play of volume and void would suggest. Inside you never forget that you’re in an art museum in a tropical metropolis. 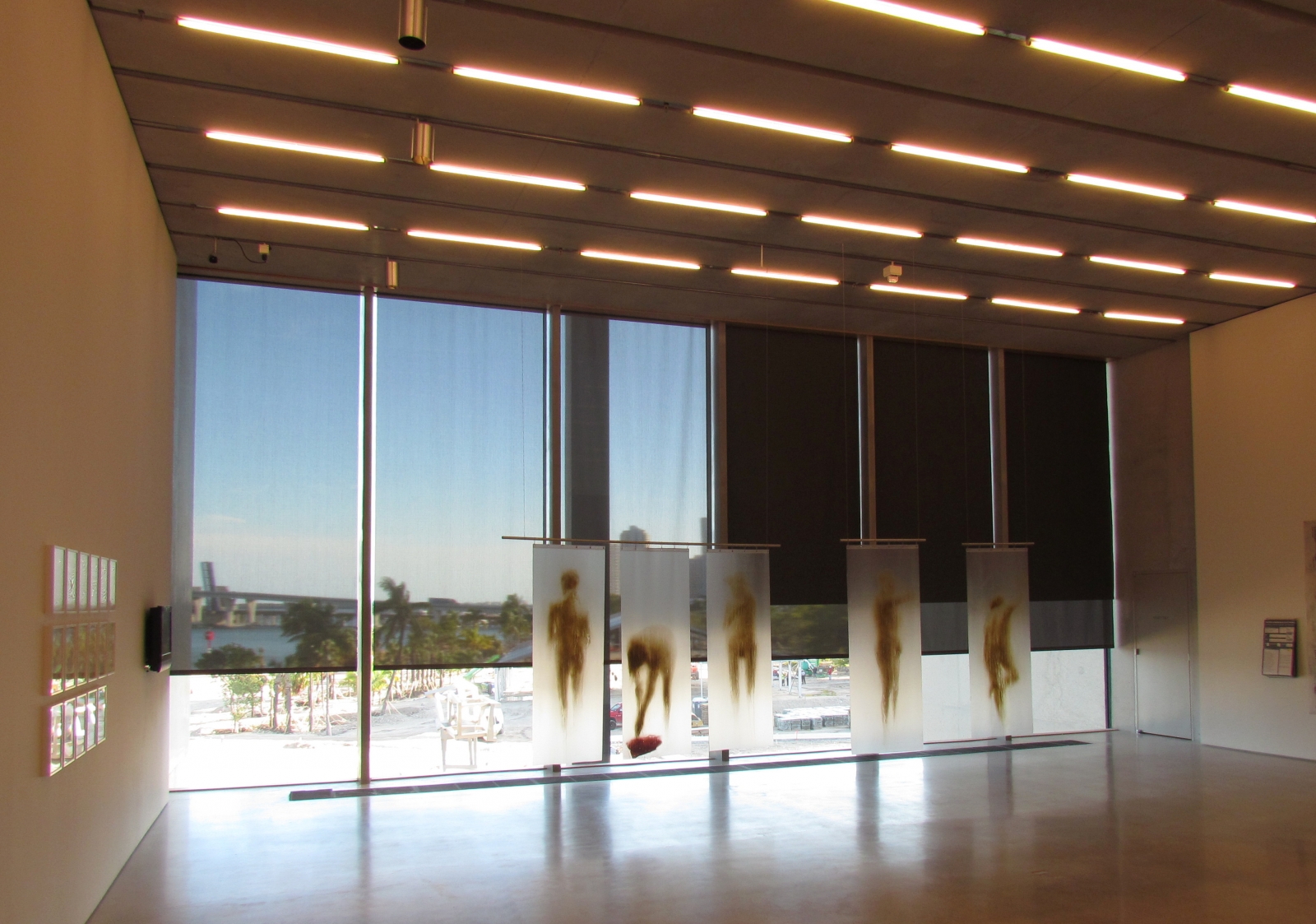 The permanent collection gallery, with project gallery in background.

Historically, Herzog & de Meuron have preferred eclectic invention on a project-to-project basis over cultivating a branded, identifiable style. This has benefited the museum which doesn’t have anything obviously Miamiesque about it, yet which perfectly responds to demands of its site and place. Clearly, the new PAMM answers the demands of a growing institution and the city it serves.

On a personal note, I must say that although very appreciative of developer Jorge Perez gift of $40 million dollars that has helped brought the museum to life, for me “PAMM” will always be MAM (Miami Art Museum). Without a doubt his generous contribution (consisting of a combination of canvases and cash) was fundamental to the museum fundraising efforts, but even more so was the $100 million that came from public funds. If this museum came to be, it was more from the support and efforts of an art community eager to make the institution’s new home a landmark for the city’s thriving cultural development, and not from an individual’s need for posthumous legacy. 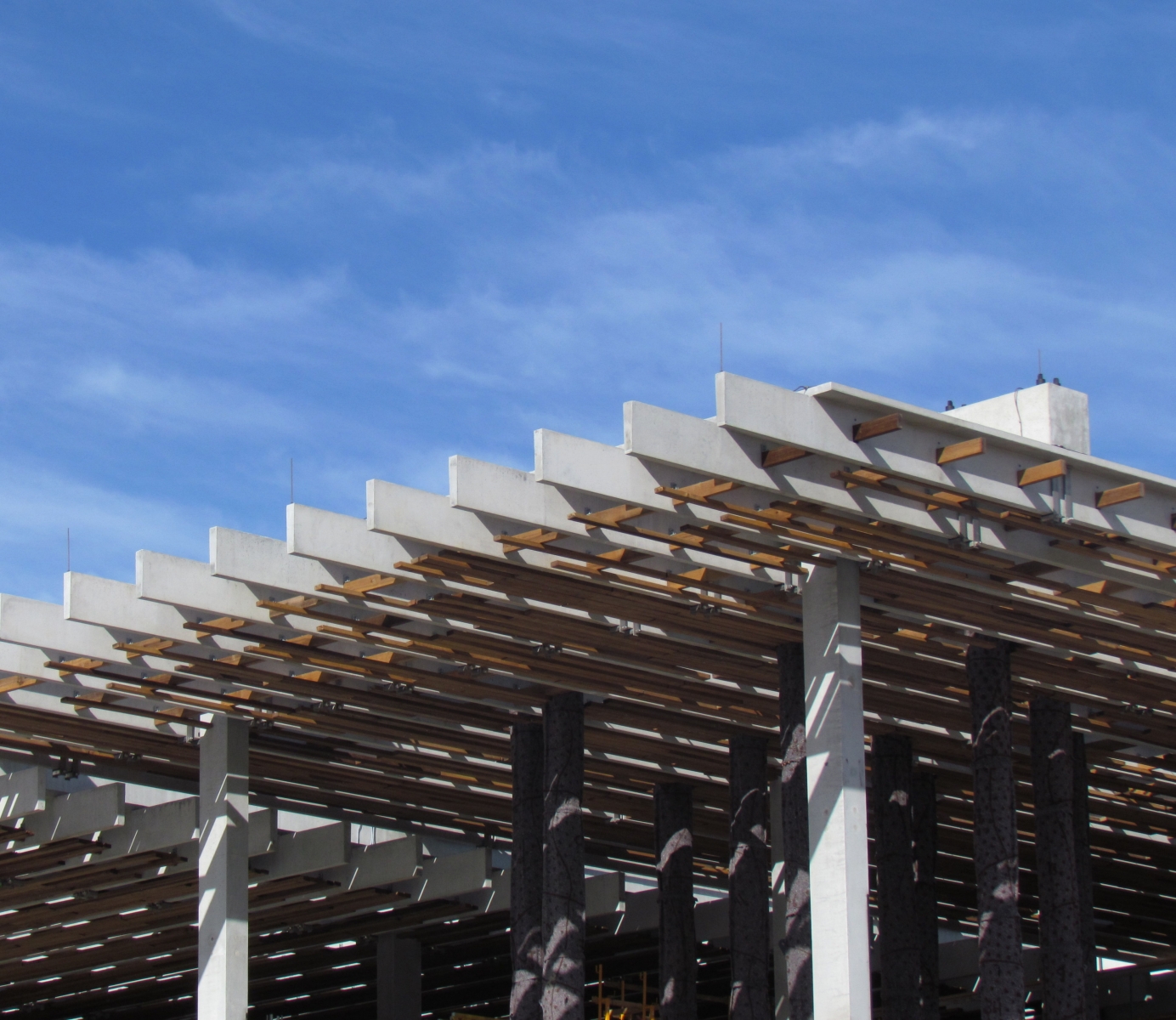 Detail of the extensive pergola system suspended over the museum volumes.

Compared to other cities with hundreds of years of cultural tradition Miami is still in its infancy, but with this building it shows that it is now well equipped to take its rightful place as a prominent world class art city, breaking with stereotypes and pre-conceived notions. And equally the architecture breaks free from the expected, its subtle charm showing that smarts can be as seductive as dazzling shapes.