Hiding in Plain Sight: ‘Stealth Shelters’ for the Homeless Rise in Marseille

The French architect Stéphane Malka knows how to cause a stir. His 2009 project Self Defense imagined stacks of riffraff apartment boxes attached parasitically to the sides of the Grande Arche at La Defense, an icon of neoliberal Paris and its delusional, exclusionary ambitions. Malka’s vertical village was the equivalent of flipping the bird, where the intention is very much to hijack a cultural monument and expose all its pretensions. Another project, Neossman, proposes that new housing parcels be built directly atop bâtiments, the decorous housing blocks instituted by the Baron Haussmann and which make up much of Paris’s historical center. These new structures would be lightweight and built of very cheap materials like tarp, forming cardboard copies of the grandiose buildings beneath them.

In both cases, the overall effect is the same: to agitate, to expose, to mock. In case it wasn’t clear enough, one look at any of Malka’s project descriptions reveals a propensity for colorful political verbiage, such as “guerilla,” “hijack,” “invade,” “resist.” Malka’s allegiances, then, are clear. His designs aim to, in his words, “unite the forsaken, the marginalized, refugees, demonstrators, dissenters, hippies, utopians, and the stateless of all kinds.”

Malka’s latest project builds on those previous conceptual exercises. A-KAMP47 consists of a wall of vinyl tents erected in an industrial corridor in Marseille. These are cantilevered off a minimal still lattice, itself fixed to a long concrete wall that fences in a railyard. Sheathed in a camouflage pattern, the tents, form “stealth” pockets of temporary shelter for the homeless and “urban campers” alike. They’re lined with an insulated isothermal covering that keep inhabitants warm on cold nights. 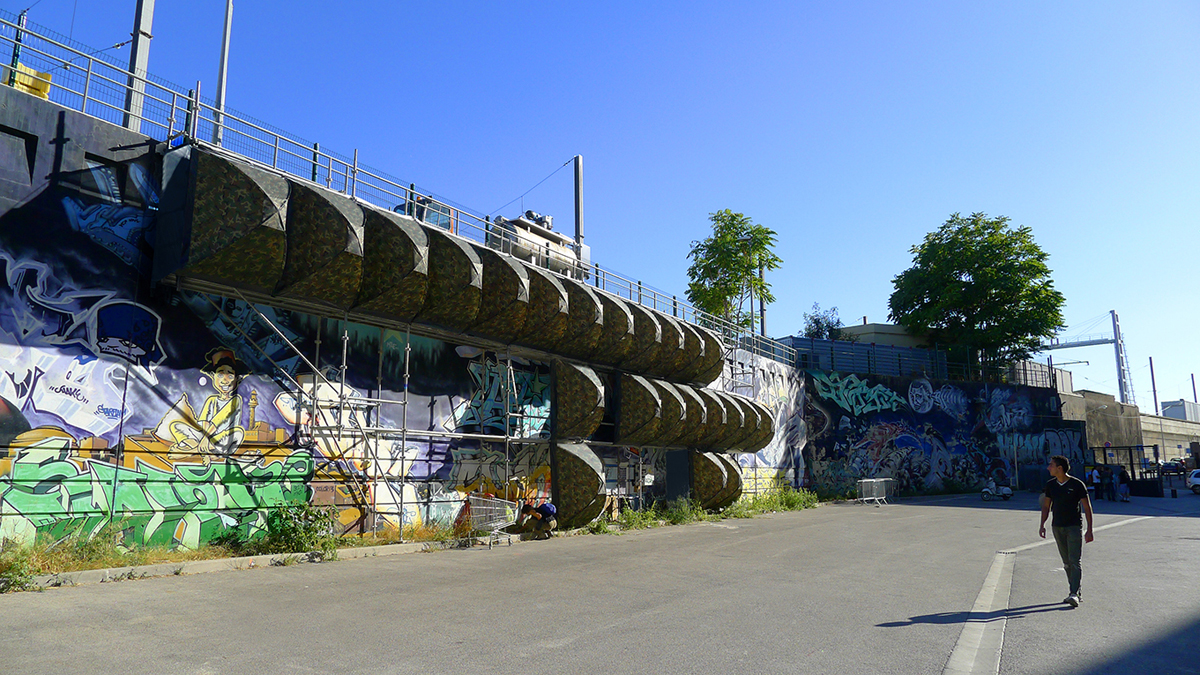 The project is sandwiched between a railyard and a large cultural building. In all, there are 23 units, each covered in an insulated lining meant to keep users warm at night.

According to Malka, the form of the camp draws on Le Corbusier’s Unite d’habitation—now a Marseille landmark and elite bastion of design—and Claude Parent’s ideas for oblique housing. The former pushed the limits of domestic space by radically minimizing its dimensions, while Parent’s call for inclined walls and surfaces informs how each of the 23 tents are inhabited. (Users do not sit inside, but recline diagonally in a “very natural way,” Malka says.)

Polemically, the design is a commentary on the global housing crisis and the market’s inability to house all of humanity, Malka explains. “Architecture tends to develop long and very expensive answers,” he tells me. Conversely, A-KAMP47 “is simple, light and easy to install,” an “architectural ready-made” flexible enough to be used for makeshift or semi-permanent housing or as emergency shelters.

More specifically, Malka pointedly locates the design in the liminal zone between public and private space. As he says, the legality of a settlement like A-KAMP47 is purposely “ambiguous.” He cites a 1982 state decree that pledged housing for all French citizens and residents, only to find the legislative support for such political promises lacking. But universal housing is too important to remain a utopian idea, and Malka’s intervention is a direct attempt to invigorate public debate over social welfare. To what extent the project succeeds in doing so remains to be seen. 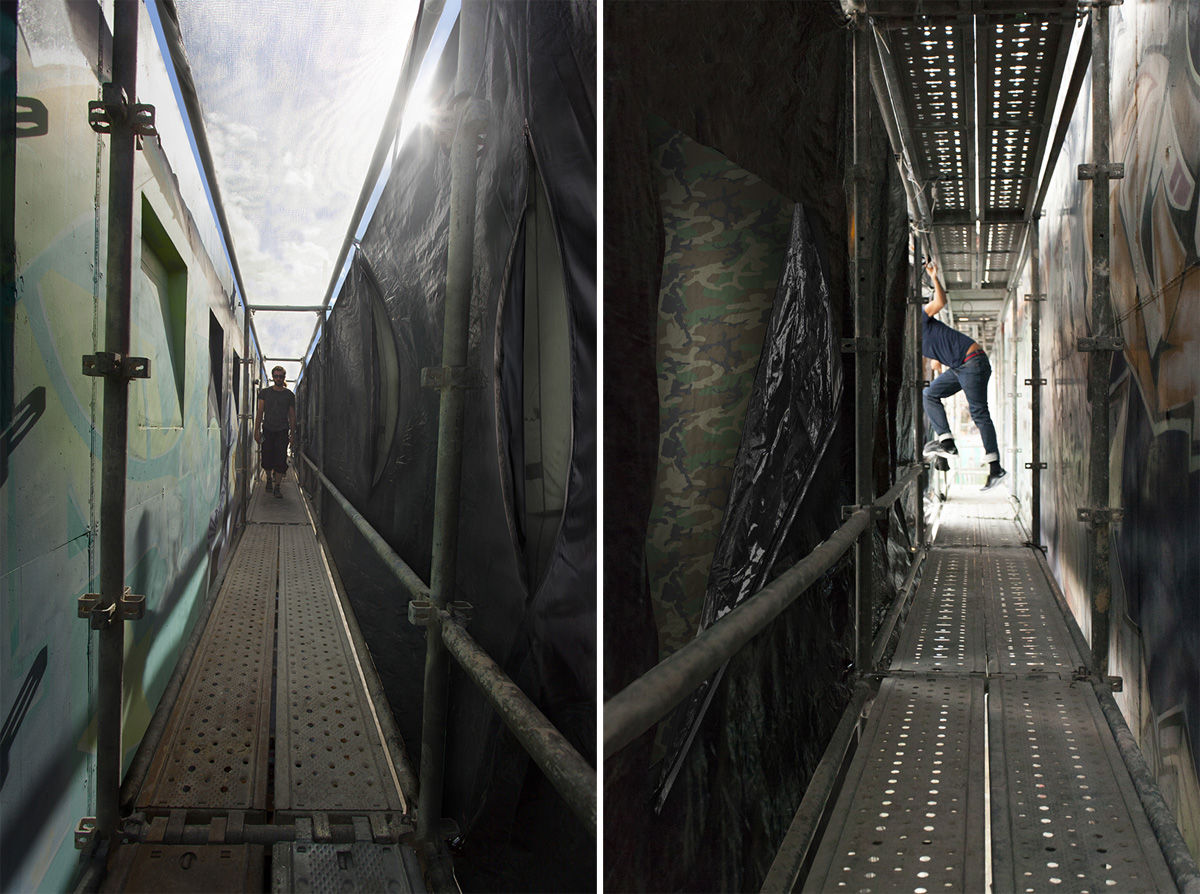 The corridor between the supporting wall and the entrance to each of the tents. 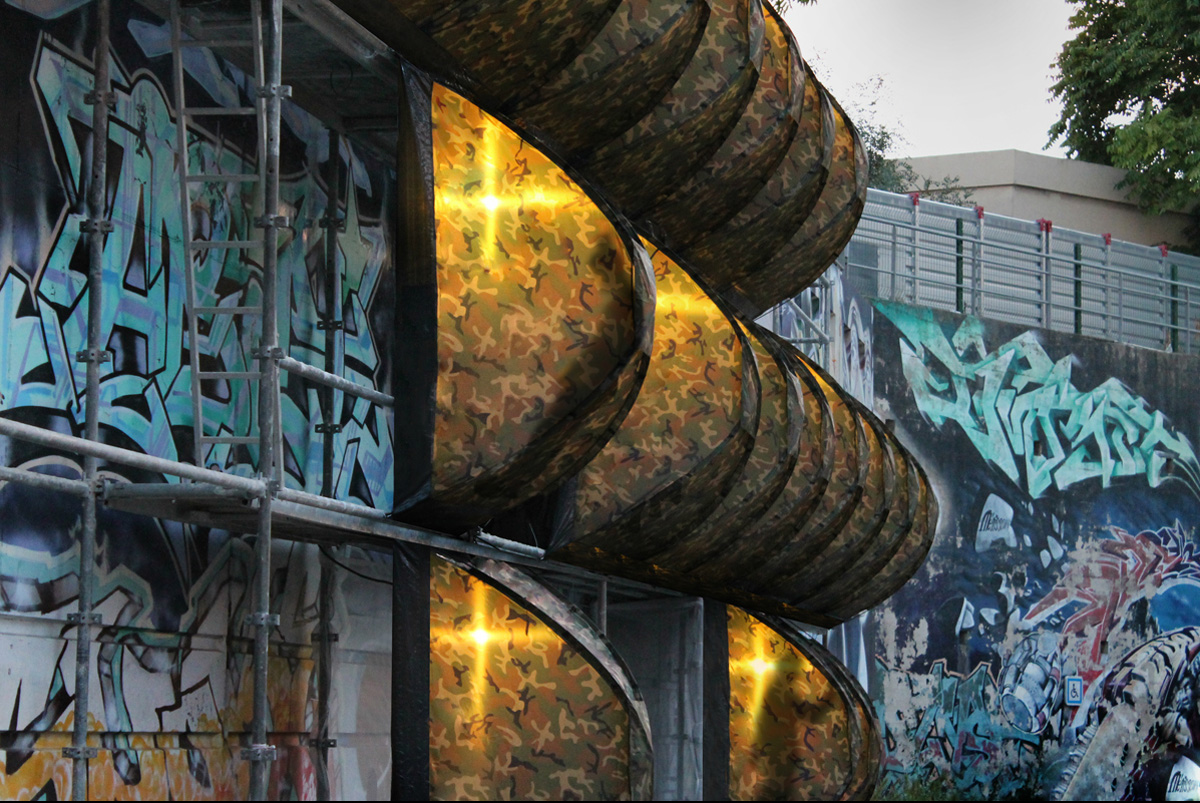 Inside, inhabitants don’t sit but recline diagonally to conform to the bulging shape of the tent. 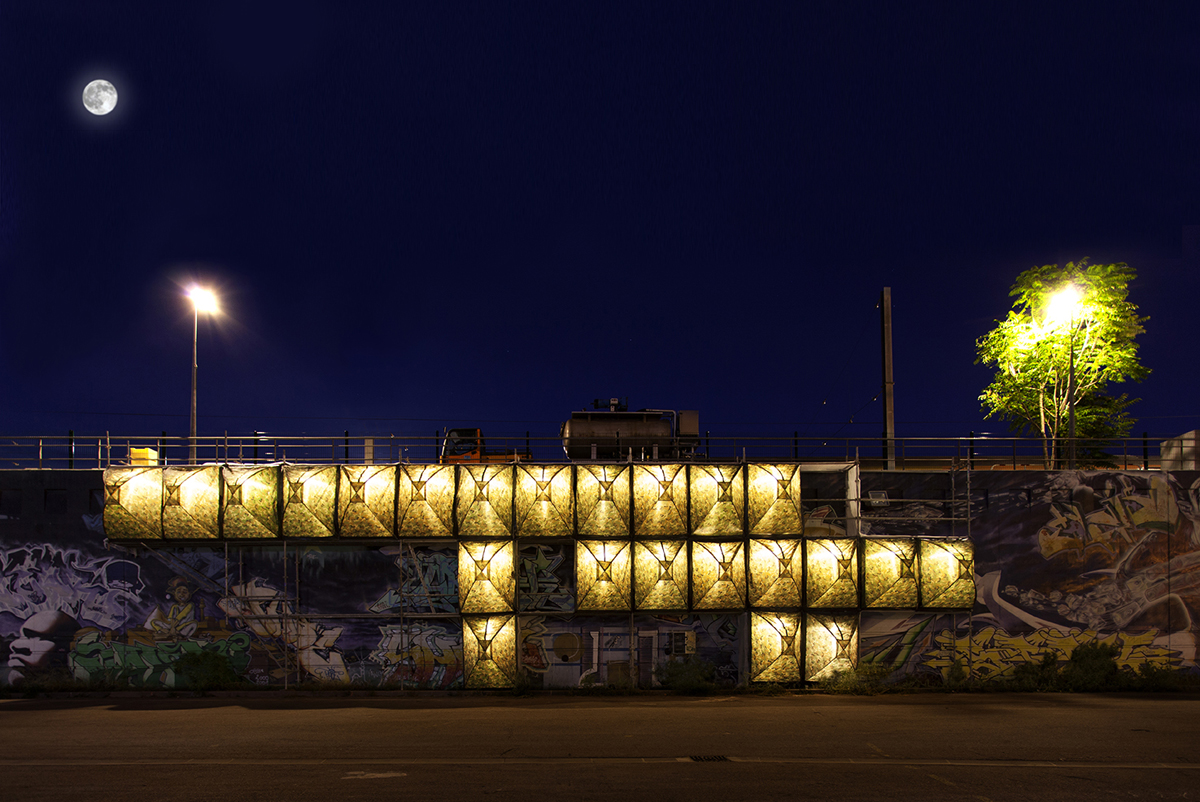 At night, each of the tents light up, creating a kind of billboard. The silhouettes of each inhabitant can be made out from the exterior. 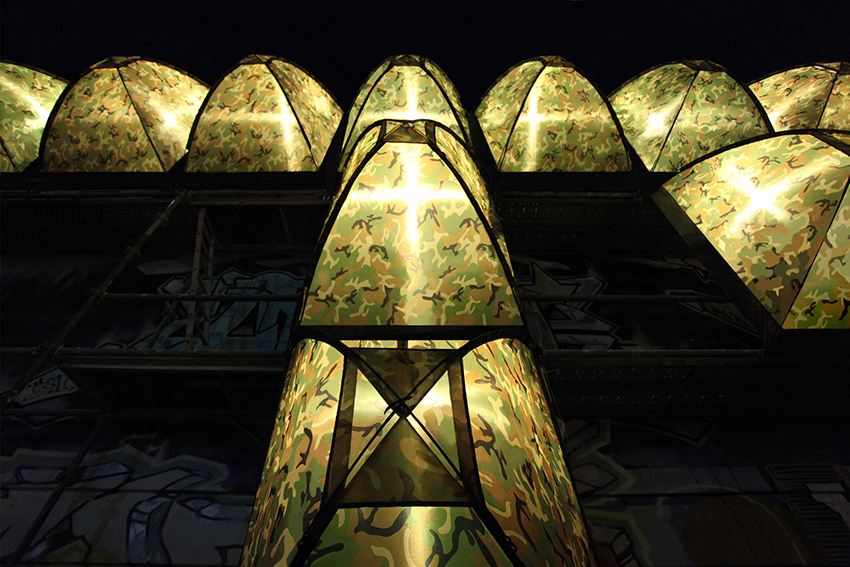 The camouflage pattern is a knowing design flourish that comments on society’s attempts to hide its homeless from plain view.