With an abundance of activities happening in New York all summer long, it’s hard to decide where to spend those valuable weekends. I’m told one of the hottest summer traditions though, is not a party on a roof, in a pool, a park or an abandoned warehouse but instead takes place at an institution like […]

With an abundance of activities happening in New York all summer long, it’s hard to decide where to spend those valuable weekends. I’m told one of the hottest summer traditions though, is not a party on a roof, in a pool, a park or an abandoned warehouse but instead takes place at an institution like MoMA PS1. Nestled in Long Island City, MoMA’s contemporary art counterpart transforms its courtyard into a lively venue every summer for the museum’s popular music festival, Warm Up. This year’s event will be my first, but I’ve heard many good reviews from my friends, raving about the previous years’ successes.

Each year, Warm Up not only brings together a line-up of fresh music talents, but the venue itself is a vibrant playground for adults.  Since 2000, the annual competition Young Architects Program (YAP), has been giving emerging architects an opportunity to reimagine an outdoor recreational space.  Providing the setting for Warm Up this year is Holding Pattern, an installation by the Brooklyn-based architecture firm, Interboro Partners, lead by Tobias Armborst, Daniel D’Oca and Georgeen Theodore. In their winning submission to YAP, Interboro focused on the theme of recycling, proposing a concert-friendly space filled with objects that will also benefit its Long Island City neighbors after.

Interboro Partners’s solution focuses on the temporal nature of the installation, and as Georgeen Theodore describes, the museum is simply “holding these objects in a pattern” before they are distributed to nearby communities. As research, the firm went straight to the telephone book, asking schools, dance studios, and taxicab drivers one question: Is there something you need that we could design, use in the courtyard doing the summer, and then donate to you when Holding Pattern is de-installed in the fall? 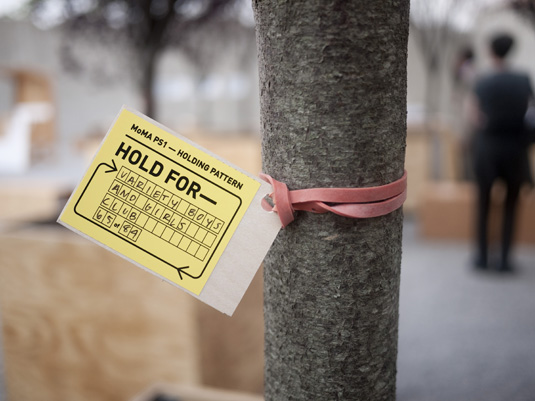 All sorts of enthusiastic responses came in, and after hearing them out, Interboro Partners worked hard to meet each participant’s needs by including an object for them in the venue’s design. The final design, Holding Pattern, incorporates a variety of objects, including stools, benches, lounge chairs, picnic tables, sandboxes, 84 oak and plum trees, ping-pong and chess tables, foosball, a misting stage, a bike rack, a lifeguard chair, and even a rock-climbing wall. Among the 79 objects intended for distribution, my favorite is a set of mirrors, now occupying a small home-like room adjacent to the main “rec” room in the courtyard, but will find its way to Long Island City School of Ballet as it plans to expand its school. The second life of each object will create more impact than its use at the festival, extending the museum’s influence in the neighborhood beyond its enclosing concrete perimeter.

What’s memorable about this installation, aside from its contribution to the neighborhood, are the bright white fabric sails forming a canopy that can be seen high in the sky as you approach the museum from outside. The 38 ropes hold long strips of fabric, reaching across the space while connecting the edges of the irregular courtyard. They are also retractable to accommodate for different weather conditions. Unlike previous designs, Holding Pattern meets Warm Up’s programmatic requirements of shade, seating and a water feature, without obstructing the view of the sky or cluttering the space. The fabric shade is simple and clean, and like the other scattered objects in the installation that are functional rather than visually enticing, they can easily find a purpose outside of MoMA PS1. 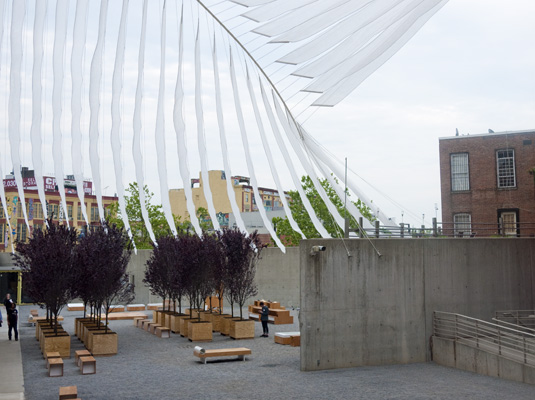 Some of these objects will be more popular during the course of the summer (a misting stage during a crowded concert? Yes please!), while others like the chess set might lose some of its pieces before the season ends. But how visitors will interact with each object is fascinating, and the museum has installed a camera at the top of the building to track this activity. Visitors are encouraged to move the objects around and appropriate them, as they’d like.

Although Warm Up runs every Saturday until September 3, recipients of the objects don’t have to wait until the fall to receive benefits of the program. Holding Pattern invites organizations within the neighborhood to use the MoMA PS1 courtyard for their own programs. To strengthen connections between the museum and the community, MoMA PS1 will be hosting an eclectic series of programs, including a senior summer mixer, a B-boy workshop, a ping-pong tournament, a traditional Irish music and dance workshop, and a family summer reading celebration. 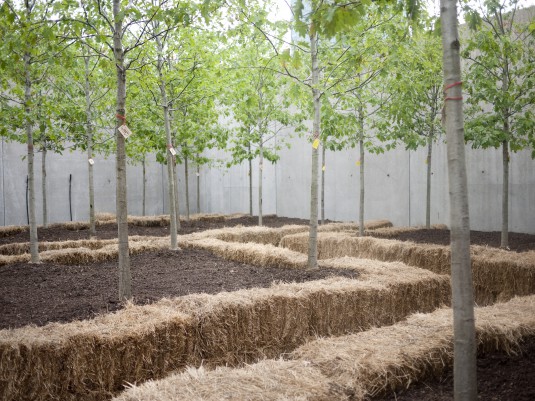 Holding Pattern is now open to public, and the first Warm Up concert will kick off  this Saturday. As part of YAP, Interboro Partners’ design will be exhibited from June 28 to September 19 in the Phillip Johnson Architecture and Design Galleries at the MoMA, as well as at the National Museum of XXI Century Arts in Rome along with five other of the competition finalists.

While I’m sure the Warm Up party and crowd will be a good one, learning the story behind the installation design makes the experience more enjoyable. When at MoMA PS1, look out for descriptions of the project, printed on vinyl and pasted on the walls next to the objects to explain more specifically about the organizations involved with Holding Pattern. Also, don’t forget to pick up the Holding Pattern newspaper on your way out, for a more detailed case study and plenty of visuals. 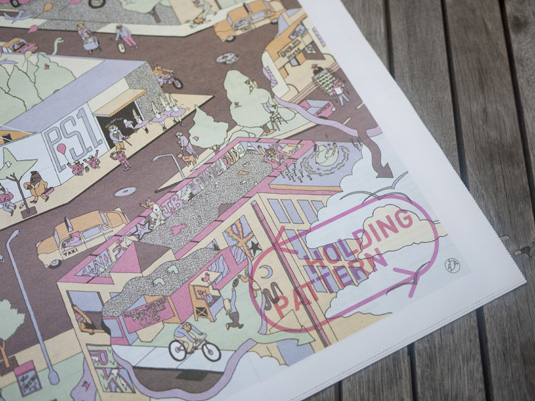