What to do with what’s been left behind? Since 2006, the decaying hulk of the Winchester Repeating Arms factory in New Haven had sat entirely vacant—its heyday long gone. During the Second World War, the sprawling complex employed 16,000 workers making bolt-action rifles for US servicemen. Starting in the 1960s, that number steadily declined. When “the gun that won the West” packed up and headed east to Belgium, its New Haven workforce had dwindled to 168 full-timers. After 140 years in New Haven, the move struck at the city’s identity. Like much of the Connecticut coast, New Haven had been dominated by the armaments industry since the late 19th century. So when Winchester announced its decision to leave, Mayor John DeStefano Jr. declared, “This is personal. This has been a struggle for these workers and this company and this community for 20 years to keep this company going.”

At the same time, the story is entirely commonplace—another entry in a decades-old national diary of economic transformations and middle-class plight. 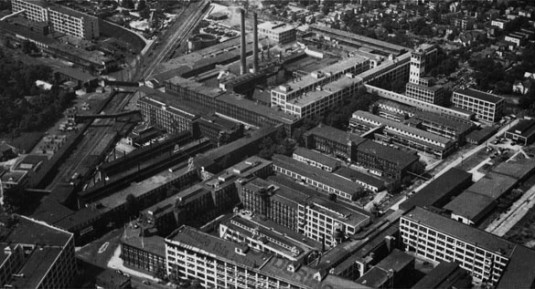 Six years after Winchester left town, this week’s opening of Higher One’s new offices—the anchor tenant for the site’s redevelopment—was necessarily a symbolic event. If New Haven’s past was guns to fight wars and hunt animals, this opening seemed to suggest its future might be higher education and financial services. Despite the relatively small scale of the project, both the mayor of New Haven and the governor of Connecticut attended the event. In his prepared remarks, De Stefano neatly summed up the day’s symbolism, affirming that “We still make things, but we tend to make things with ideas.”

The mayor’s thought is hardly novel yet it encapsulates a vision for the economy. Absent any bravado, the Svigals + Partners retrofit of the Winchester plant offers a vignette into the spatialization of this much-hoped-for future. 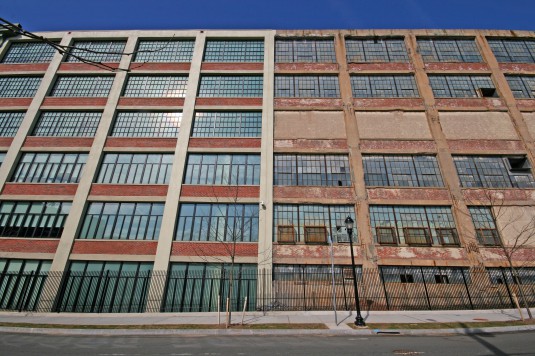 Renovated and un-renovated facade on Munson Street
Courtesy Higher One

Hidden largely out of sight within the defunct factory, Svigals + Partners’s design for Higher One’s offices at first seems to risk little. A large volume is lifted above the entry on round columns. A small light shaft in the lobby opens up nicely into a larger central atrium on the upper floors. The architect intelligently clustered social and public spaces at the center of each level and reserved the top floor, with views of New Haven, for the cafeteria, rather than partners’ offices. Old industrial skylights and large windows are nicely retrofitted to produce a warm, light-filled workspace, despite the deep floor plates. Taken as a whole, the project is thoughtfully designed though slightly anodyne. 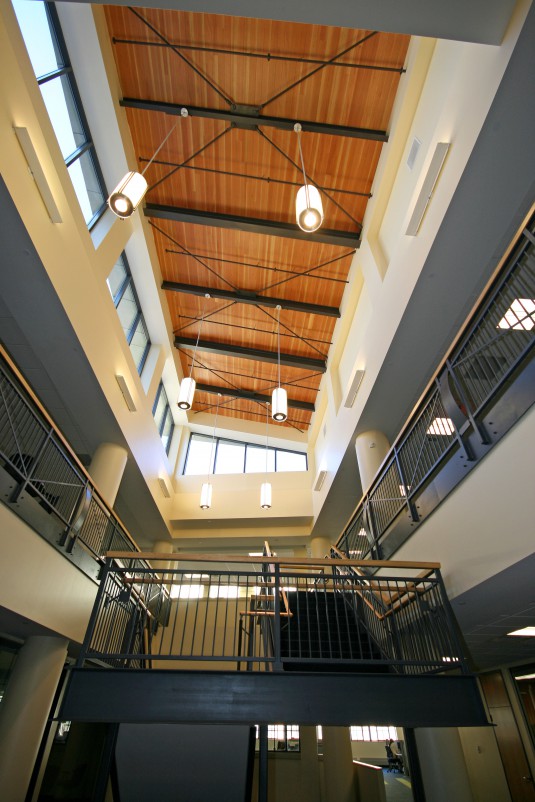 The most interesting aspect of the building, though, is its most basic. Rather than occupying a long section of Building 30 on Munson Street, Svigals + Partners convinced the client to take a smaller street frontage but occupy a building in the complex’s interior and connect the two with new construction. The courtyard that results is by far the most interesting and dynamic space in the project. 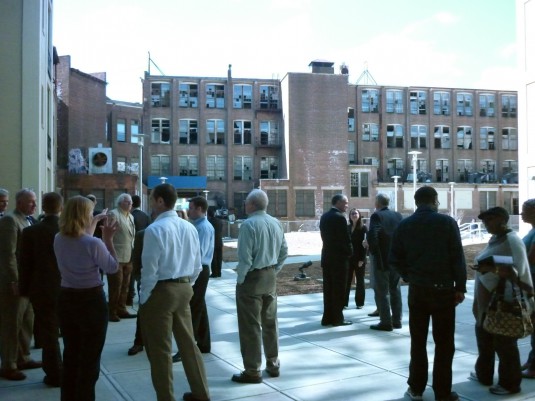 Walking through the courtyard, I was startled to see how little of the Winchester plant had been restored. While one side of the space was dominated by Higher One’s glassy curtain wall, the others had been left untouched. Blown out glass windows, defunct industrial fans, flaking paint, broken-down doors, and countless other vignettes of decay created an entirely schizophrenic mise en scène. On the far side of the courtyard, two women sat on a bench enjoying the sun and surveying their unusual environment.

Such a chaotic space would have been unthinkable even a generation ago. Then, the old factory would simply have been replaced with a new office building. The current economic anxiety, however, seems to have reinforced a nostalgia for such industrial wreckage. An entire genre of coffee table books celebrates the desolate, post-industrial landscapes of cities like Detroit.

Standing in the courtyard, I was struck that somehow the space was different. It was not simply a product of decay and neglect but rather a confusing mélange of new and old. The half-dilapidated space was full of people chatting about the project or sipping on white wine. As I stood in the courtyard waiting for the opening ceremony to start, the space seemed indicative of a new typology—one that may become increasingly common in a post industrial economy—a sort of active ruin.

Teo Quintana is a Masters of Architecture student at Yale and a charter member of Team Crush.