How Hong Kong’s Vertical Village Came to Be

The following is an excerpt from the revised and expanded edition of City of Darkness, the authoritative text on Kowloon Walled City. The book’s authors are now seeking funds to facilitate the volume’s printing. Help Kickstart their project here. See Guy Horton’s critical piece for a different opinion on the Walled City.

The early phases of the Walled City were characterized by predictable building typologies and the buildings were constructed on the principle of squatters’ rights, with random construction on spots of available land by whoever got there first. Alleyways and passages evolved—unplanned—into the established ‘map’ of the city, which would remain until it came down. A basic electric supply existed, increasingly burdened by illegal connections that frequently overloaded the system, and the few standpipes supplied the only water. As the need to accommodate the ever growing residential and commercial populations forced it to in the 1960s, the building typology of the Walled City made the leap from two- to three-story residential structures to taller, six- to seven-story ones. This represented an important threshold, because at these greater heights the buildings unavoidably became more complex and required greater labor to realize, reinforced concrete, more investment, and so on. They also required a different way of living. Water had to be transported up to the higher floors by hand. Likewise the propane gas canisters that furnished fuel to cook or heat water.

The new buildings adapted themselves in relation to the specific contingencies of their sites. Erected without architectural or engineering participation, proper foundations or piling, they used materials of dubious quality, ignored conventional mechanical and electrical standards, lacked proper circulation and fire egress, access to daylight or fresh air, water supply or waste disposal, and certainly didn’t enjoy adequate maintenance once constructed. They used available space—free from the normal constraints of title deeds, property limits, and regulations—in completely original ways. They were inventive, renegade architectural specimens. 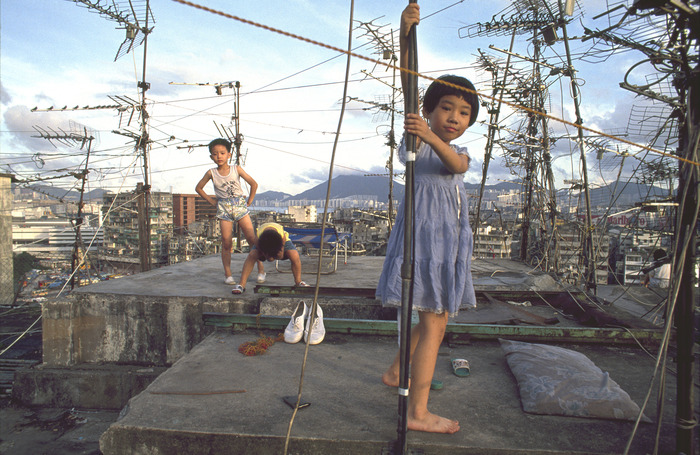 The only constraint observed with consistency was the Kai Tak Airport height limit that existed for the entire area of Kowloon. Presumably even the most unscrupulous developer realized that to challenge this would be counterproductive, as it would force the government to respond negatively. Aside from this one ‘golden height limit,’ almost anything was worth a try.

Ground-floor open space—the small gardens and animal pens still present in the 1950s—was soon gone, replaced by concrete structures and alleyways. At ground level, daylight shrank month by month. ‘Developers’—anyone with gumption, funds, and access to knowledge about rudimentary building construction—made proposals to existing ‘owners’ such that they might trade their current two-story structure for larger or more units in new, more ‘modern’ buildings constructed in their place. When possible the developers grouped sellers’ adjacent properties together to produce a larger footprint and thus the ability to construct a larger tower, thus increasing profits. This naturally resulted in an evolution in the grain of the city; a step up in scale not only in height but also in breadth. 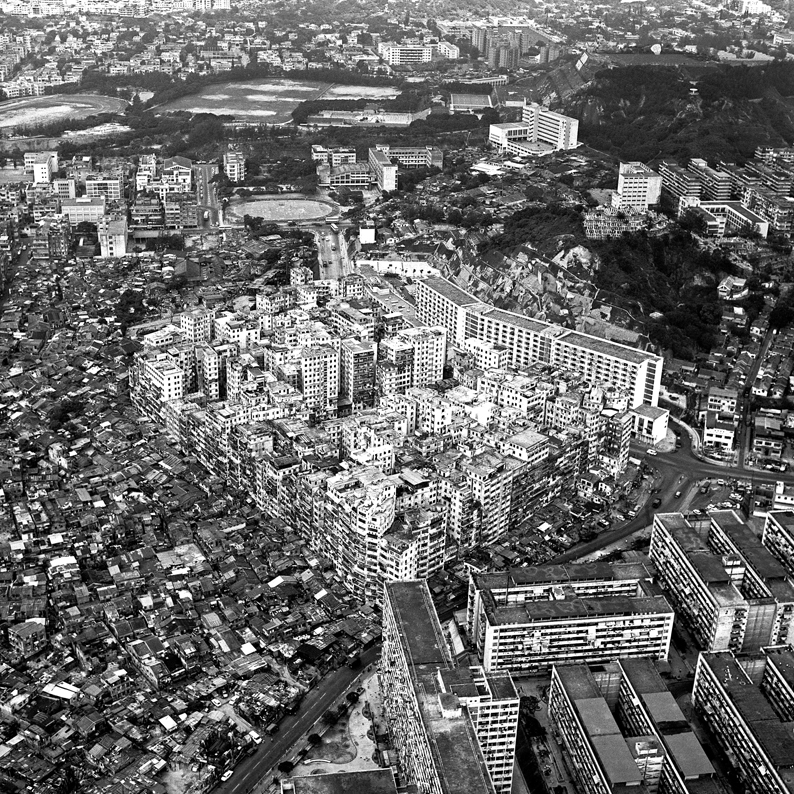 Because there was no masterplan to follow—or regulations to adhere to—unconventional circulation routes starting to weave through the city, rising and descending through adjacent structures. Existing staircases were co-opted, windows in adjacent buildings were ignored and walled over, floors were cantilevered over alleys, sometimes until they touched those across the way. The roofscape of the Walled City became its own public realm, with potted gardening, playing children, reposing adults, and where lateral circulation occurred (even by the postman). Lower buildings were not always demolished, but simply had additional stories built atop them, occasionally even by taller buildings next door. At higher levels, corridors were connected to allow people to traverse different structures without returning to ground level, so that while moving through the city, it became difficult to know when you had crossed a ‘property line’ between one building and the next. This ambiguity was irrelevant to the residents familiar with the routes, who navigated the interwoven circulation system of the city fluidly. This extraordinary ‘organic’ growth became one of the Walled City’s most distinctive and interesting characteristics at an architectural and urbanistic level.

An attempt in 1963 by local authorities to clear and evict a section of the north-east corner of the Walled City was halted after objections from the Chinese Government, and this explicit denial of British power within the Walled City opened the floodgates to rampant development. That same year, the local Kai Fong Association was formed by the residents, in part to help face the challenge of the British eviction effort and in part to arbitrate property claims, which undoubtedly increased in number and urgency thanks to the building boom. The population by this point had surpassed 15,000 people. Complete anarchy was no longer sustainable. The Kai Fong became the de facto authority for property disputes and transactions in the city, and established their stamp as the sole recognizable proof of ownership on property records. Very quickly, it also assumed responsibility for oversight of other services as well, and for negotiations with the Hong Kong Government on the residents’ behalf. It proved a vital organizational body right up to the demolition of the Walled City. 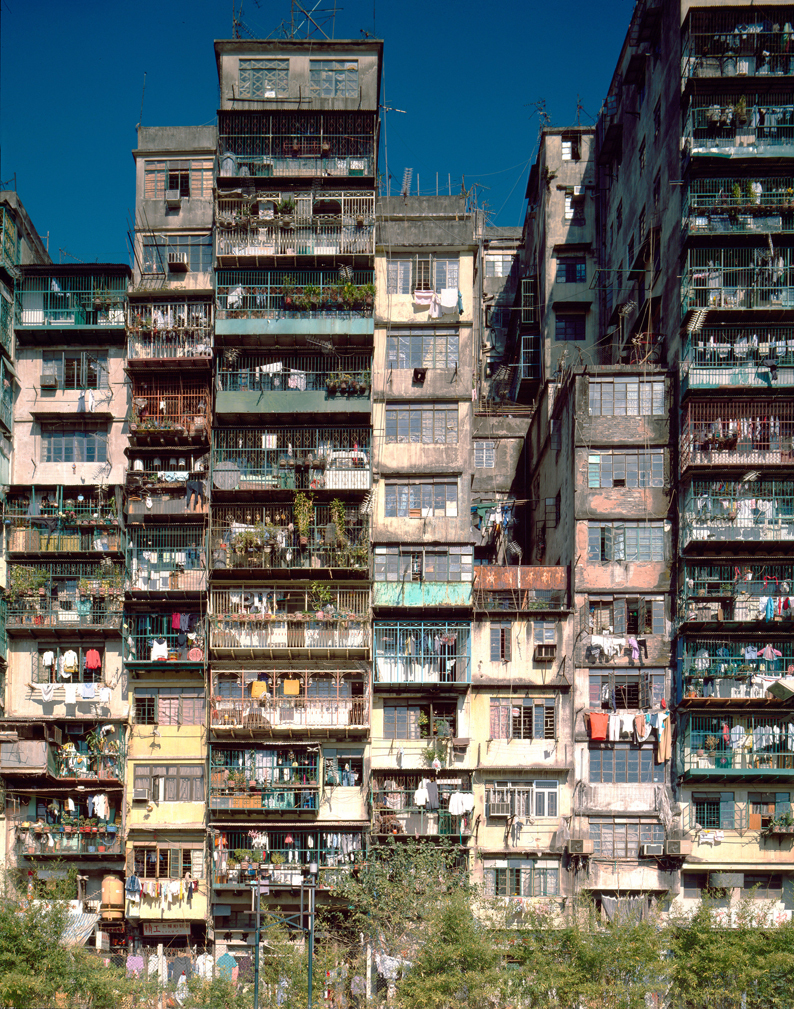 Living conditions within the Walled City grew ever worse, as the increased building activity and resulting density put yet more pressure on inadequate infrastructure. Water supply and quality deteriorated, drainage was insufficient and often blocked, electrical outages became regular, despite genuine—if, in parts, only partial—outside efforts by the Government and utilities to address the problems. The authorities accepted that they had to to make some improvements, but were frustrated by conditions that made retrofitting near impossible, and by the constant illegal connections made to the systems. More importantly, however, they were restrained by the very natural concern that any improvements gave legitimacy to an illegal settlement that, otherwise, they were keen to demolish.

Meanwhile, private water wells were dug under the city (and the water sold for profit) with no thought to the consequences. The authorities did add one additional water standpipe, but the supply couldn’t keep pace with the growth in demand, and as the Walled City grew higher and denser, it became ever more difficult to rationalize and modernize the utilities anyway. The Government faced an unsolvable dilemma: it wanted to improve conditions without thereby encouraging further growth, but couldn’t easily do so because of the puzzling maze the Walled City had become. 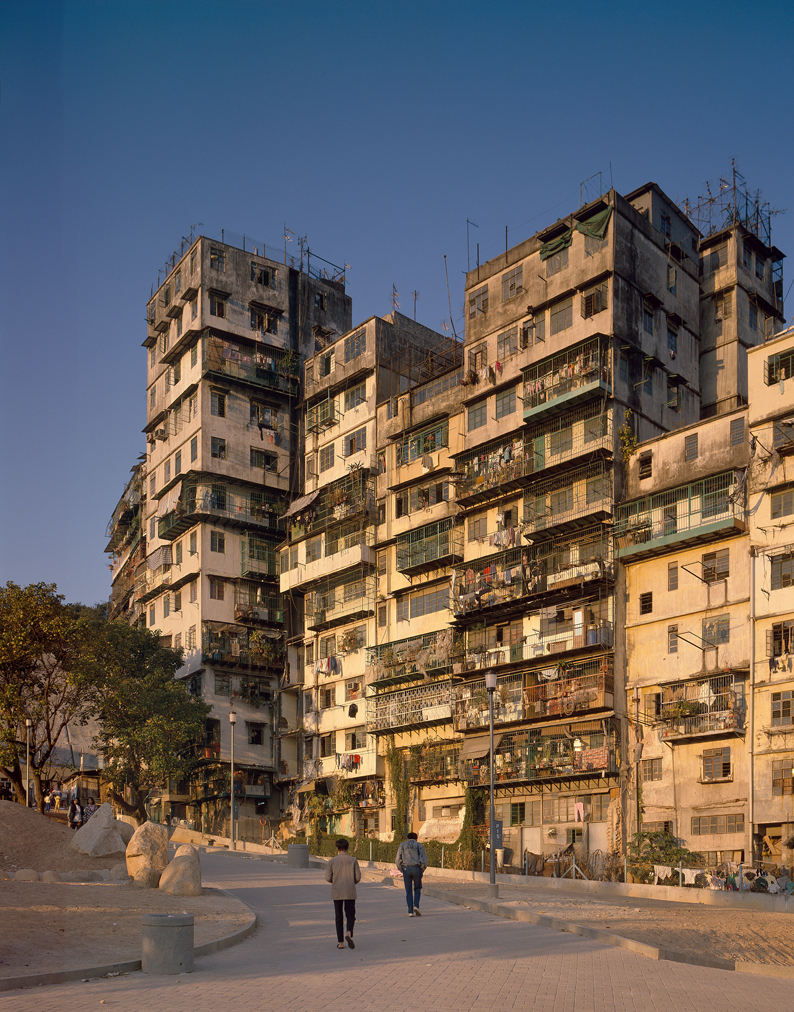 By the 1970s, the city had filled out to its maximized form, with buildings of up to 14 stories in height, and virtually no ground level daylight penetration save at its centre. Its density was estimated to have reached a mere 7 square feet per person. The yamen area had somehow remained an exception to the vertical development, leased to a missionary society in 1949 for use as an almshouse and old people’s home. Eventually, it defined the sole substantial void within the Walled City, with visible sky above it. A small temple near Lo Yan St. also survived, but had been all but buried under the rubbish dropped from surrounding towers, to the point where skylight was virtually invisible above it.

During the 1980s, the last remaining ‘missing teeth’ in the urban block of the Walled City were filled in, and it had coalesced into an almost continuous mass, especially when seen from without or above. By this stage it functioned as a pulsing, living organism, with circulation arteries of different sizes, plumbing and electricity veins streaming through it, and a pockmarked, discolored epidermis on its perimeter made of irregular fenestration, badly maintained stucco and concrete walls, and all manner of balconies, cages, extensions, racks and air-conditioner units clinging to it like moles and growths. 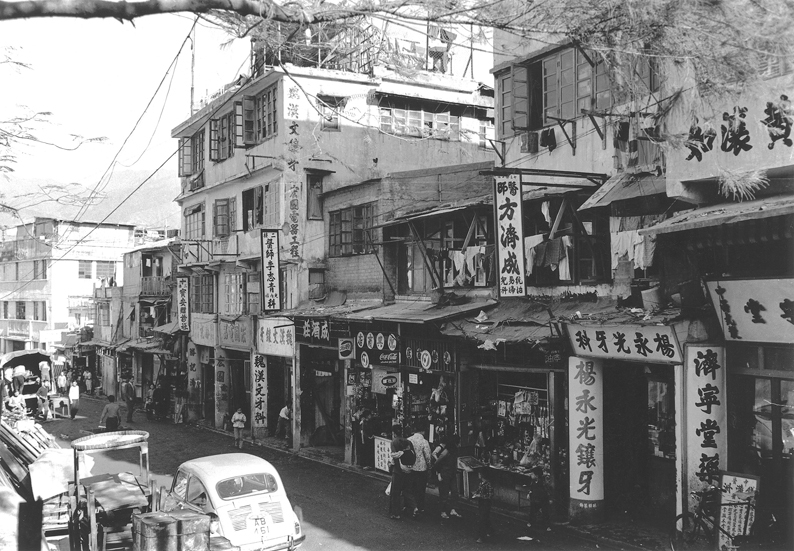 Some buildings seemed to lean against their neighbors, some were impossibly narrow, many were undefined as to their party walls. These final-stage towers were undoubtedly the most precarious, if inventive, of all in the Walled City’s history. Their builders claimed they were safe, that they mimicked all the same building regulations of structures outside the city in Hong Kong. This is probably mostly true, since many of these constructions were ‘designed’ and/or erected by people freelancing from outside, or by contractors with experience on legitimate projects elsewhere. And after all, none ever did collapse. Yet it is also true that they were built at the very knife-edge of minimum standards. They were constructed purely as profit machines.

It is also probably true that as the city grew and solidified into an almost single physical mass, structural weakness was at least partly mitigated by structural context; buildings held each other up, or at least stabilized the entity as a whole. Rather like a full subway car at rush hour, with bodies packed skin to skin, it is hard to fall down when there is little space to do so. Obviously, buildings aren’t as simple, and a tower can collapse vertically onto itself. But as the city interwove its social and physical form, its structures became parasitic not only in terms of space, but of stability, at least as far as it went. 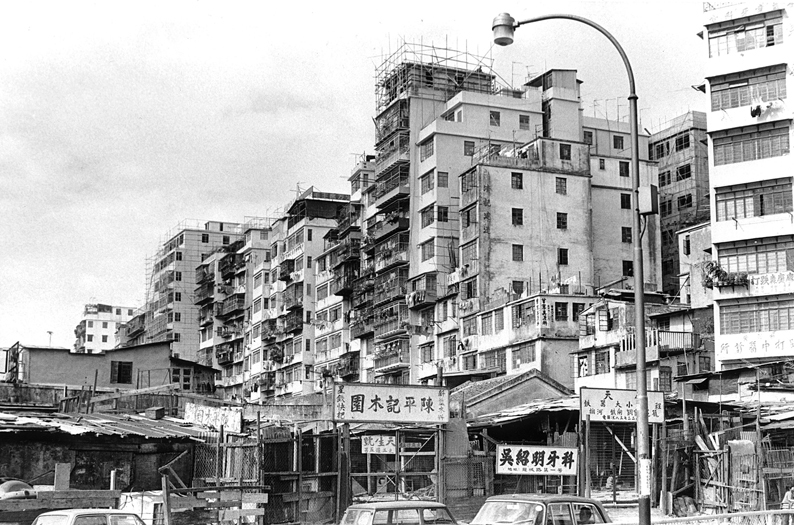 Was the Walled City then a good laboratory test-case for urban self-growth, absent regulation or planning? Was its organic evolution an example of what all cities would look like without functional Government participation—a kind of Mad Max world of only self-regulated norms and limits? Without romanticizing the reality of the Walled City, it also limited the negative, forming a proto-government, using unwritten laws instead of written ones, and to a significant extent functioning as a true democracy (certainly a true market economy). It grew more workable in a practical sense as it became internally integrated. Its coherence, which may not have been obvious but was understood by its inhabitants, increased as its social, spatial, economic and, yes, architectural interdependency grew, and it matured into a fairly functional community machine. It was by then a truly indigenous physical entity, which is why it has fascinated architects and urbanists for so long.

This post originally appeared on ArchDaily under the title, The Architecture of Kowloon Walled City: An Excerpt from ‘City of Darkness Revisited.