How New Architecture Is Pointing the Way to Portland 2.0

Designed by Lever Architecture, Union Way is a new 10,000-square-foot shopping complex that aspires to be an urban corridor.

It’s hasn’t rained in Portland for months. But today I’m walking with architect Thomas Robinson on our way to visit a pair of his recently completed projects and, of course, it’s pouring down rain.

Robinson is used to the rain. He’s lived in Portland for a decade. He began his career under Joseph Esherick at EHDD Architects in San Francisco. After attending graduate school at Harvard, he worked as a  senior project architect and project lead at Herzog + de Meuron in Basel, Switzerland. When he moved to Portland, Robinson became a principal at Allied Works Architecture, before founding Lever Architecture in the Pearl District. That’s where I met up with him for our tour.

We cross Burnside and head toward Union Way. Powell’s Books and the Ace Hotel are two of Portland’s most popular destinations and they’re only a block away from one another. But until last year, there was a disconnect: A jumble of buildings stood between them. Developer Tom Cody and Lever Architecture recognized that there was a pedestrian desire line there that had not been addressed. So, they embarked on a project to create that urban connection. 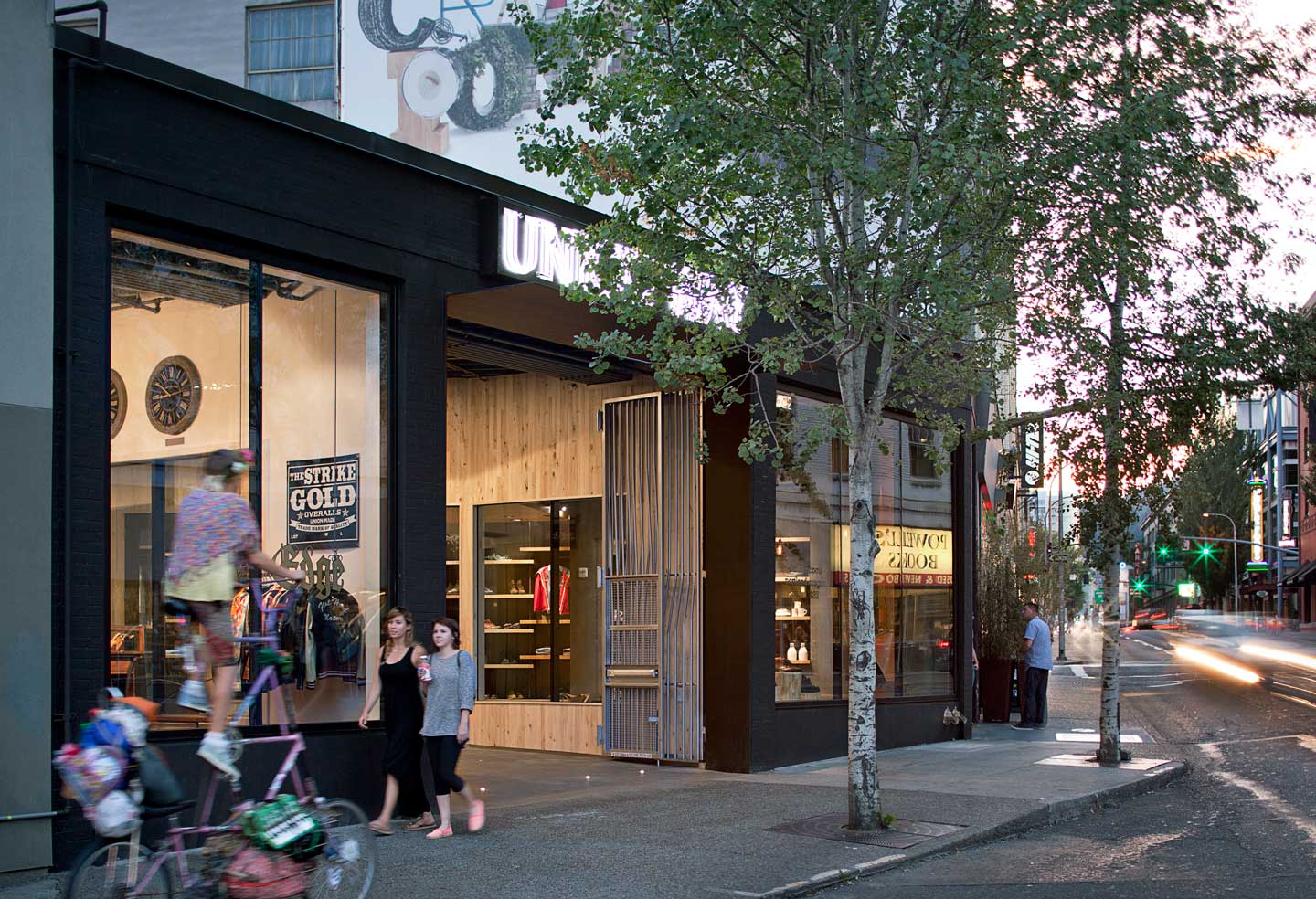 The shops are lined up along a generous pedestrian thruway, an arrangement that recalls the retail arcades of European capitals.

That project, Union Way, now stands as a 10,000-square-foot covered corridor lined with vibrant retail spaces. It’s day-lit and runs between two existing buildings and is the kind of passageway you might expect to find in a city much older than Portland—Paris, perhaps. But Union Way is utterly Portland in tone—in fact, the New York Times referred to it as “so Portland it hurts.” That’s because its retail spaces feature the artisanal, well-wrought goods that are associated with Portland, including locally made leather belts, wallets, bags, and the like.

But there’s something that makes Union Way even more “of Oregon” than the products in those shops, and it’s hidden in plain sight.The full extent of the Union Way corridor is lined with Pacific Albus, a type of poplar hardwood. Oregonians will likely be familiar with its origin: the Boardman Tree Farm, which is located along I-84 between the Columbia River Gorge and Pendleton. The farm is an unforgettable spectacle of precisely planted rows of trees that stretch for miles across the East Oregon landscape.

Lever had the poplar for Union Way custom-milled to achieve a refined field of detail for the project. The customization was to ensure that the knotty grade of wood Lever had selected wouldn’t be mistaken for something like basement paneling. It was a more labor-intensive process, but it made the difference in terms of achieving a more refined space. 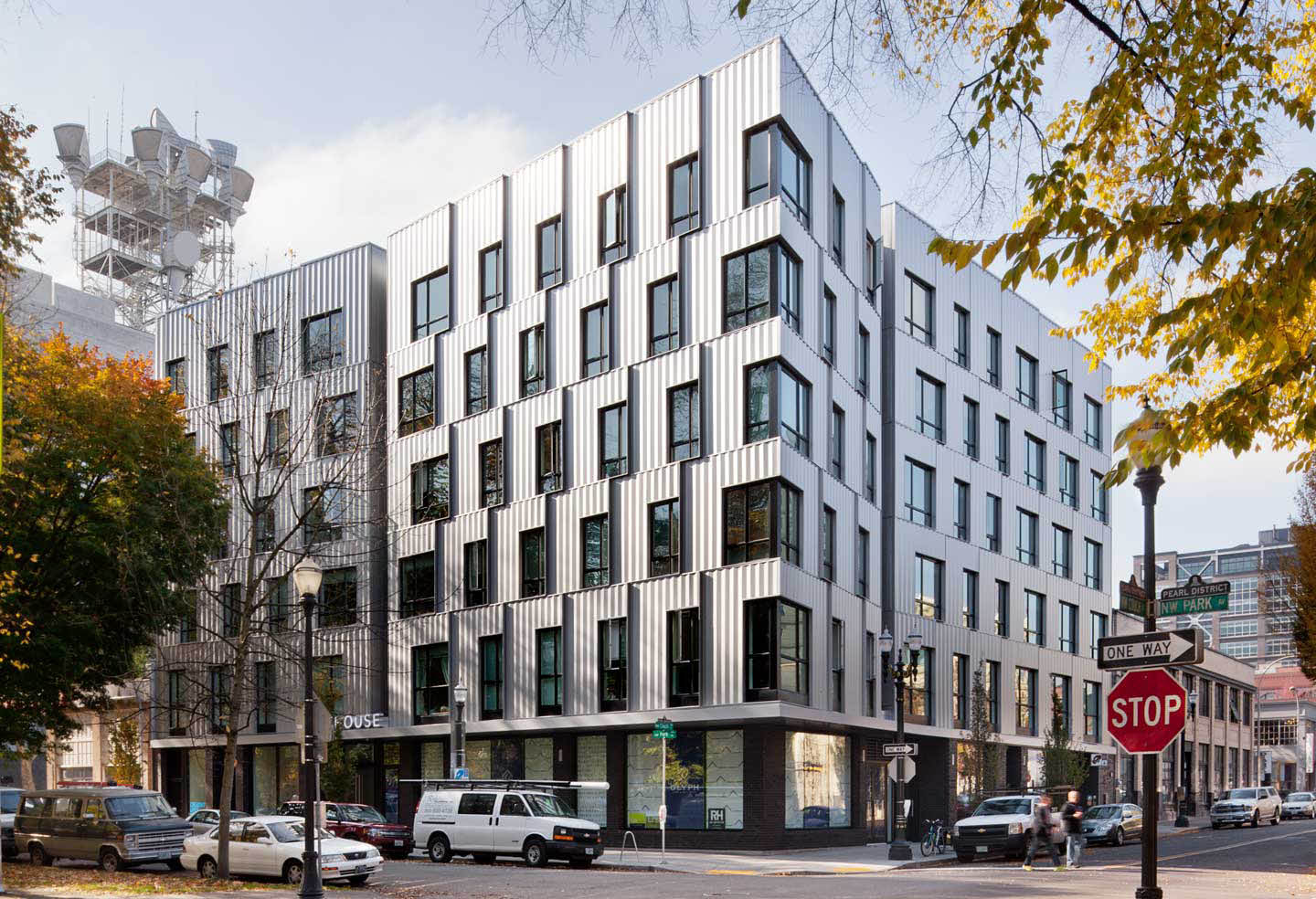 Arthouse is not your typical student housing block. The project, its architect says, transcends its basic programmatic requirements by including retail and social spaces.

Now it’s raining even harder. We walk two blocks down Burnside to visit a second of Lever’s projects—named Arthouse—which is student housing for the Pacific Northwest College of Art. As we round the corner onto the North Park Blocks, the building comes into full view.

Here’s how to visualize the Arthouse facade: Imagine that you’ve got a sheet of metal and a hammer. You pound that sheet of metal into a box shape. Now you’ve got a box, and that box now has a textured patina full of variations due to the hammer strikes. Each of those variations is a plane and, together, they create a dynamic play of light across that box’s surface.

A variegated surface like that is what Lever came up with by making use of very standard metal panels but radicalizing their use. The result is a dazzling facade that didn’t blow the budget. “It’s taking a product that’s pretty economical and trying to think of a way to put it back together that transcends its simple nature.” says Robinson. “Just that subtle shift is the difference between it looking like a box and being flat and looking at something that plays with light.” 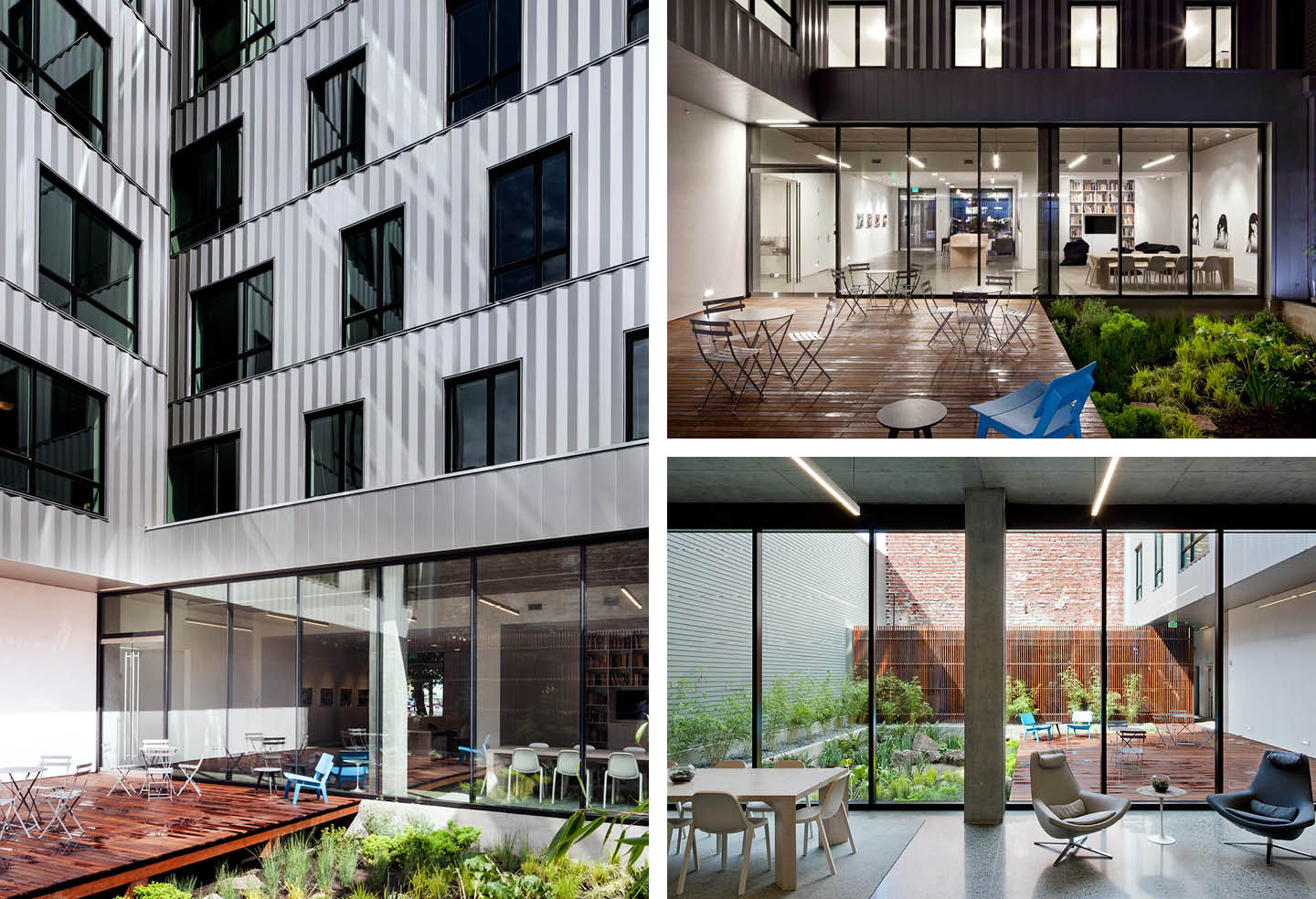 The sizable central courtyard is a luxurious amenity that also lets plenty of sunlight into communal spaces and corridors.

Of course, the building is more than just a facade. At street level, a gallery, a rain garden, and a coffee shop welcome both the building’s residents and its neighbors. Arthouse houses the students, while also contributing to the urban life of the city. 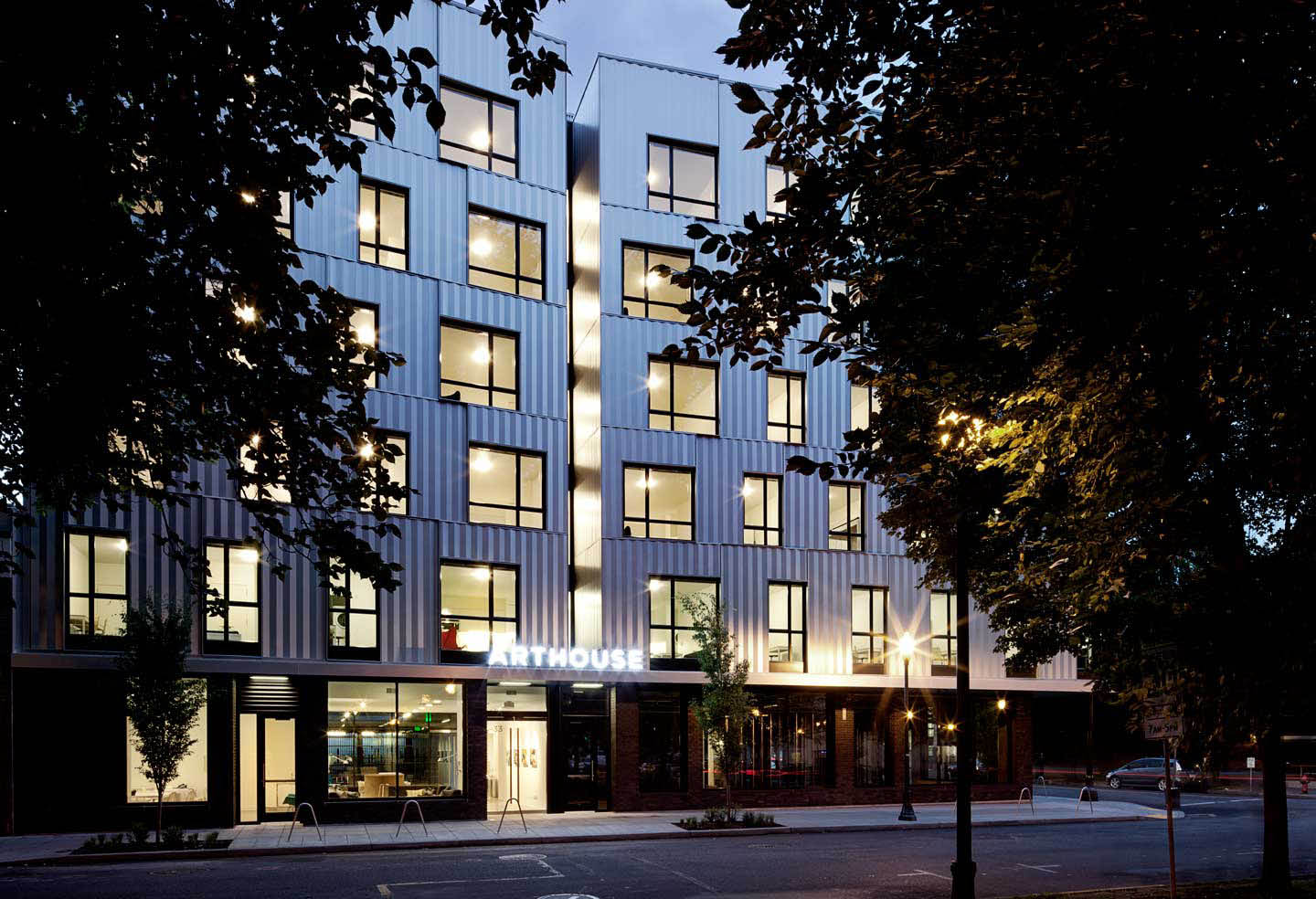 The building is pulled back from the street to create an extra-wide sidewalk and accommodate extra seating and bike racks.

Of both Arthouse and Union Way, Robinson says, “You’re having to hit a lot of different bottom lines. It has to be profitable otherwise it doesn’t exist. You’d like it to be beautiful. And you also want it to contribute to the urban fabric in some way within that framework. So that’s been an interesting equation to try to solve.”

To live in Portland is to live in a small city. With 603,000 people in the city proper, it ranks smaller than, say, Lexington, Kentucky at 609,000. “I don’t think people outside Portland realize how small it is,” says Robinson. “If you do good work, it resonates. And if you don’t, that also resonates.“

To work in Portland is to help shape a young city. So young that Robinson reminds me that there are still unpaved roads all over the east side. If he’s using his former home of Basel—a two thousand-year-old city rich in history—as a comparison, Portland is indeed young. “It’s really just taking its first steps, but it’s off to an encouraging start,” Robinson says. He looks forward to the future: “We’re benefiting from Portland 1.0. What will Portland 2.0 look like?”

Metropolis publisher/editor in chief Susan S. Szenasy will be in conversation at Design Week Portland, October 7. Register for the event here.

This is the second post in a blog series devoted to design culture in Portland. See the previous post here.