In Defense of Make it Right in New Orleans’ 9th Ward

If you rebuild it, will they come?

The New Republic recently posted a piece on Make It Right entitled “If You Rebuild It, They Might Not Come,” accompanied by the provocative, Google-friendly subhead: “Brad Pitt’s beautiful houses are a drag on New Orleans.” The author, Lydia DePillis, argues that the project, however well meaning, has diverted resources that could be better spent in other parts of the city.

There are a number of things about this piece that really bugged me as an editor (it’s sloppy and unsourced early on, for one, and ends with a completely unsupported conclusion, which I’ll get to later on). But first I’d like to concentrate on the central premise: that Pitt’s 90 (and counting) Make It Right houses have failed to revive the Lower Ninth, which according to DePillis, remains “a largely barren moonscape.”

The news hook for the piece—as best as I can discern (maybe DePillis cashed in miles for a trip to New Orleans)—was the not-so-recent announcement by Make It Right that it would open up eligibility for houses to people “who didn’t live in the neighborhood prior to Katrina.” DePillis says there’s a (cliché alert) “Catch-22” to the announcement, since there is no real neighborhood surrounding the “futuristic” houses. (What exactly is a “futuristic” house?) No stores, no services, not even a fast food restaurant. None of this is news, and much of it is only partially true.

I don’t know how much time DePillis spent in the Lower Ninth reporting the piece. Was it her first time? First time in a few years? If so, then I can understand how she might survey the vast, desolate sections of the neighborhood, and come to the wrong conclusion. But, if I can resort to a couple of clichés of my own, here’s the real scoop: it might not look like it to the casual observer, or to the visiting out-of-town journalist, but something is stirring in the Lower Ninth. DePillis cited the 2010 census figures for the neighborhood—“2842 (down from 14,000 in 2000)”—but she either ignored or just plain missed the most obvious development. And it’s one I see on a weekly basis: the neighborhood is re-populating.

It might not look like it to her, but the numbers clearly bear it out. According to Ben Horwitz, a demographer with the Greater New Orleans Community Data Center, “Our data on households actively receiving mail shows that there were 1,271 households receiving mail in July 2010 and that has increased 27.8% to 1,624 households receiving mail in July 2012. While we do not know the household size, it is reasonable to assume that the population in the Lower Ninth Ward grew at a relatively similar rate.” Those very reliable numbers, now eight months out of date, don’t reflect current developments that are likely to further spur continued population growth: construction of a fire station, a proposed supermarket, a mixed use higher-density development near the levee in Holy Cross. At this point, the neighborhood may have grown as much as one-third in two-and-a-half years—and that’s thanks in no small part to Brad Pitt and Make It Right.

Make It Right planted a very symbolic flag in the ground at a time when the future of the neighborhood was in grave doubt. The Lower Ninth had long feared a “land grab” by developers, enticed by the wholesale removal of the neighborhood (no poor people, lots of open space, perfect for golf courses, resorts, casinos). Given the racial politics of New Orleans and the devastation of the Hurricane Katrina, these were perfectly plausible fears. I would argue that the worldwide attention that Brad Pitt and Make It Right focused on the neighborhood early on made that ugly outcome impossible. 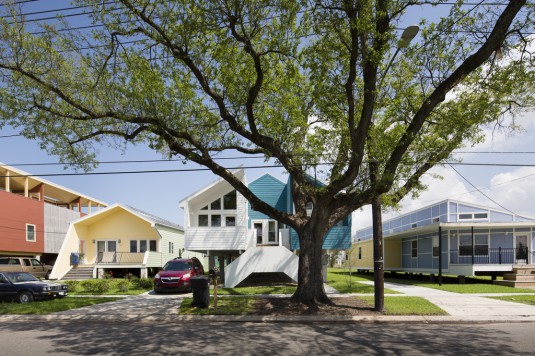 As for the “diverted resources” argument, this is really two issues: civic investments by the city, which DePillis implies are ill advised; and the considerable chunk of money raised by Make It Right. The author quotes Laura Paul of lowernine.org (a group doing terrific work in the neighborhood), saying: “It’s just not a great solution to affordable housing issues.” Correct. But Make It Right was aspirational from the start. It was never about building the most houses, the most expediently; never about rebuilding an entire neighborhood. FEMA and the Road Home were supposed to handle that. It was about building for returning residents 150 affordable LEED Platinum houses by some of the world’s best architects.

It was also about creating a model for sustainable development. That has turned out to be a whole lot more complicated than first imagined—and there have been mistakes along the way—but last time I checked executive director Tom Darden and the folks at Make It Right are on track to meet their goal. (Darden’s response to DePillis is worth reading)  And the $45-million raised by the organization? That’s money spent largely in New Orleans that would not have existed without the initial vision for the project. Make It Right didn’t divert resources, it raised public awareness about the plight of a neighborhood most people would prefer to forget. (This of course begs the obvious question: would DePillis be writing about the neighborhood if Make It Right didn’t exist?)

As for the city, it is now responding to pressure from community groups (Make It Right’s project architect, John Williams, has been vocal in pushing for a new high school) and to facts on the ground. If a neighborhood grows by 30-percent in two years, it might be time to put in a firehouse. How is that a waste of limited resources? DePillis’s piece is not only ill informed, but the ending is an unearned, contradictory cop-out. She spends a good 1,500-words building her case, only to end it with a section on the “Lower Niner’s” deep “ancestral connection” to the land. In the final paragraph, she quotes Michelle Thompson, an assistant professor at the University of New Orleans: When you’re here, and you talk to people, you’re like, this is generation of families. This is more than bricks and mortar. Who’s to say which neighborhood is more valuable than another?” she says. “There’s a lot of constraints and reasons why not to do it, and that’s why we should. Everything people think can’t be done, New Orleans puts on its head, and makes it  happen…You look at the Lower Nine and say, ‘why?’ And now I say ‘why not?’” A great way to end the piece. (It sounds like an outtake from a Make It Right promotional!)

But DePillis tacks this quote on at the very end after arguing, at considerable length, the exact opposite. Why didn’t the author follow her argument to its “logical” conclusion? The Lower Ninth is a lost cause. Instead she pulls back in the end, waxing lyrical about the grit and resilience of the neighborhood. Why the about-face? Did her interviews with residents not quite jibe with her working premise? (If so, as an editor, I’d advise re-thinking it.) Did she suddenly come to her New Republic senses and realize: oops, there’s actually a social justice issue to all this? Maybe these people deserve the same right to rebuild their neighborhood as the rest of New Orleans? I don’t know. I do know that the promise Make It Right made to the Lower Ninth is being kept. The houses aren’t a drag on the city. They’re undeniable signs and symbols of hope. Why not, indeed.