In Photos: The Last Days Of Three Paul Rudolph Houses

A new photography book details the slow demise of a handful of houses designed by Paul Rudolph.

In this month’s feature story “Worth Preserving,” Fred A. Bernstein passingly eulogizes Paul Rudolph as the “bald eagle of mid-century modern—a symbol of America, endangered by Americans.” Hyperbole? Perhaps, but more than any of his contemporaries, Rudolph’s legacy has been subjected to a rampant streak of wreckage, demolition, and forced obsolescence. Several of the architect’s most important buildings have either been razed or repeatedly threatened with oblivion.

Last year, Rudolph’s Orange County Government Center, a Brutalist marvel too ugly, harsh, and uncompromising for most, was sentenced to the chopping block, only to be “saved” at the last minute. (Its status is uncertain.) The loss of Orange County would have been on par with the leveling of Riverview High School, perhaps Rudolph’s most well-known work—apart from a handful of masterpieces from his Brutalist phase—and which ingeniously integrated passive cooling systems and other environmental features into its design. Despite its importance to the history of modern architecture, Riverview was quietly demolished in 2009.

While the outcry was fierce, few mourned the Micheels House in Westport, Connecticut (1972), the Cerrito House in Watch Hill, Rhode Island (1956), or the Twitchell house in Siesta Key, Florida (1941) when all three were torn down in 2007. The houses are the subjects of After You Left, They Took It Apart, a new book by photographer and Rudolph admirer Chris Mottalini. The volume consists of images Mottalini snapped over six years ago, when the structures were still standing, but only just. By the time Mottalini got to them, their fates had already been sealed. 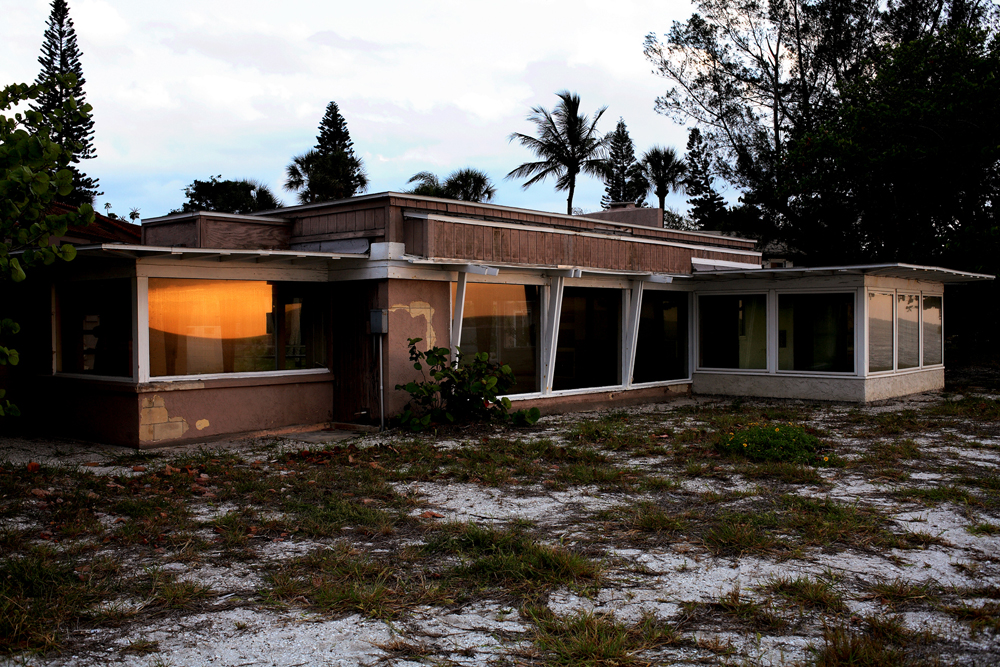 Mottalini visited the Twitchell House in Siesta Key, Florida (1941) before it was torn down in 2007.

Courtesy Chris Mottalini, from After You Left, They Took It Apart (Columbia College Chicago Press)

Windows cracked and eaves sagging, the houses seemed to have dutifully accepted the sentence handed to them. In the photographs, the sense of loss and erasure is imminent, but Mottalini’s lens doesn’t revel in either. He is adamant that the pictures aren’t portraits of failure nor of ruin. Instead, they simply explore the personal, heartfelt affinity he felt for his subject. “I know that this project in particular can be a bit depressing, but I never had negative feelings while taking those pictures,” Mottalini explains. “I feel lucky for being able to experience those homes in that way, [by] wandering around by myself, taking pictures of every last detail, really interacting with the homes. I got to know those homes in a way that the owners themselves might never have been able to.”

By closely documenting each house, Mottalini began to develop an affinity for Rudolph the architect. After photographing the Micheels House—the first in the project series—he eventually went on to visit a couple dozen Rudolph buildings (some thirty in total), including the Shoreline Apartments in Buffalo, Mottalini’s hometown. Mottalini, who had up until that time no background in architecture, says the city gave him a “crash course in modern architecture,” though he wasn’t exactly conscious of the fact until much later. “My high school graduation was held in a Saarinen concert hall, so I guess modernism made it’s way into my subconscious at an early age.” Before he knew it, architecture, in particular Rudolph’s architecture, had absorbed all of his creative faculties. 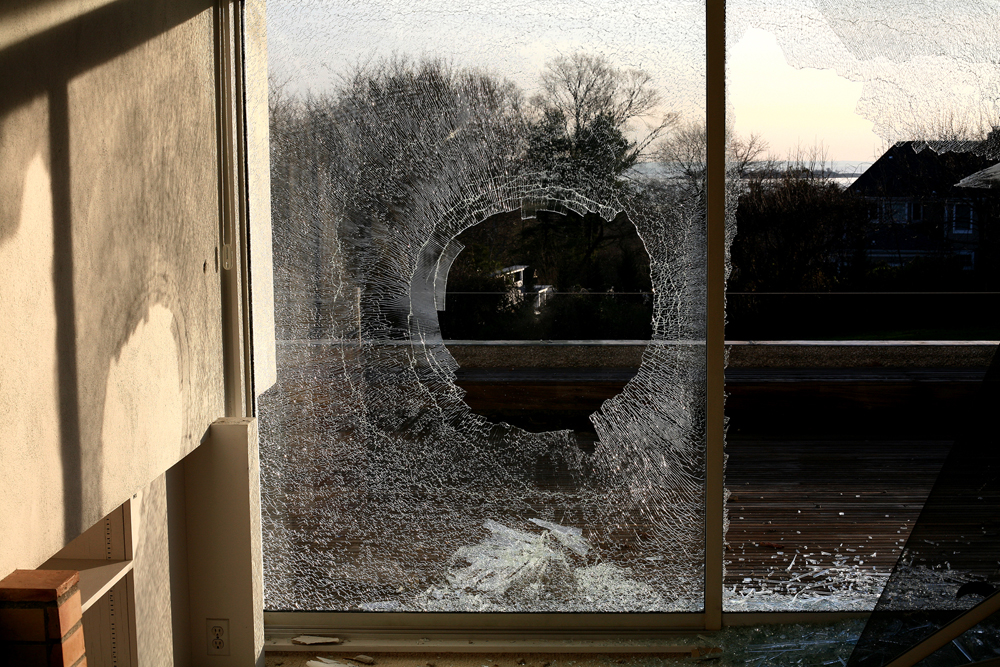 A shattered glass wall in the living room of the Micheels House in Westport, Connecticut (1972), just before its demolition.

Courtesy Chris Mottalini, from After You Left, They Took It Apart (Columbia College Chicago Press)

And yet Mottalini didn’t let his admiration for the houses or their architect influence the content of the photography. The drama of preservation crusades having receded, the images reveal the homes for what they were. In truth, the projects were hardly canonical, and none were necessary to understanding the Rudolphian catalog. Too idiosyncratic to be deemed timeless, the houses speak more about Rudolph’s burgeoning gifts of form and evolving sense of style than of the Modernism they ostensibly claimed to have represented. When Mottalini frames the homes from dramatic angles, as they would have been appeared in glossy magazines of the period, he shows how flimsy and small these once-heroic forms have become. At the same time, he exposes just how inadequate the modernist dream (that is, in its domestic application) always was. In one image, the cantilevered, horizontal expanse of a roofplane is interrupted by a stubborn palm tree. In another, the Cerrito House’s expessionistic, near-airborne roof is reduced to toylike dimensions.

Ultimately, Mottalini was and remains concerned with the unique story each house had to tell. His depictions of the houses’ interiors highlight the traces, however faint, of the life that was existed there. These details—a carpet stain here, an abandoned computer monitor there—reflect the (suburban) domesticity that once animated and necessarily violated Rudolph’s architecture. “I felt the history in those homes, all the years they were lived in by families,” Mottalini says. “I’ve basically spent the past six years looking at those photos and I feel a very strong connection to those homes, even though, physically, they’re long gone.” 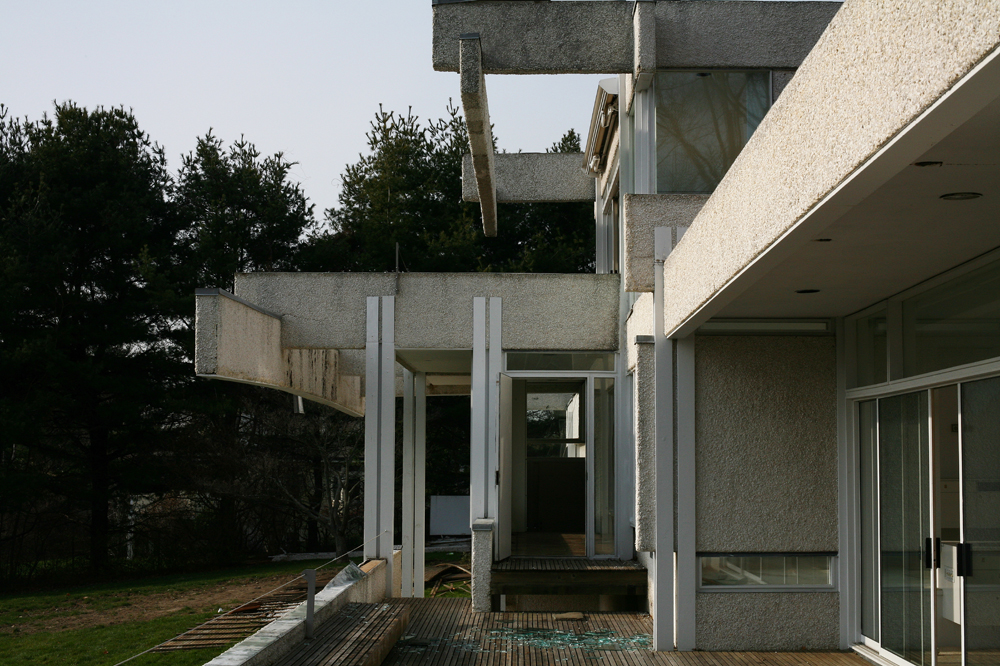 The Micheels House seen from the porch, covered with broken glass from the busted living room window.

All photography courtesy Chris Mottalini, from After You Left, They Took It Apart (Columbia College Chicago Press) 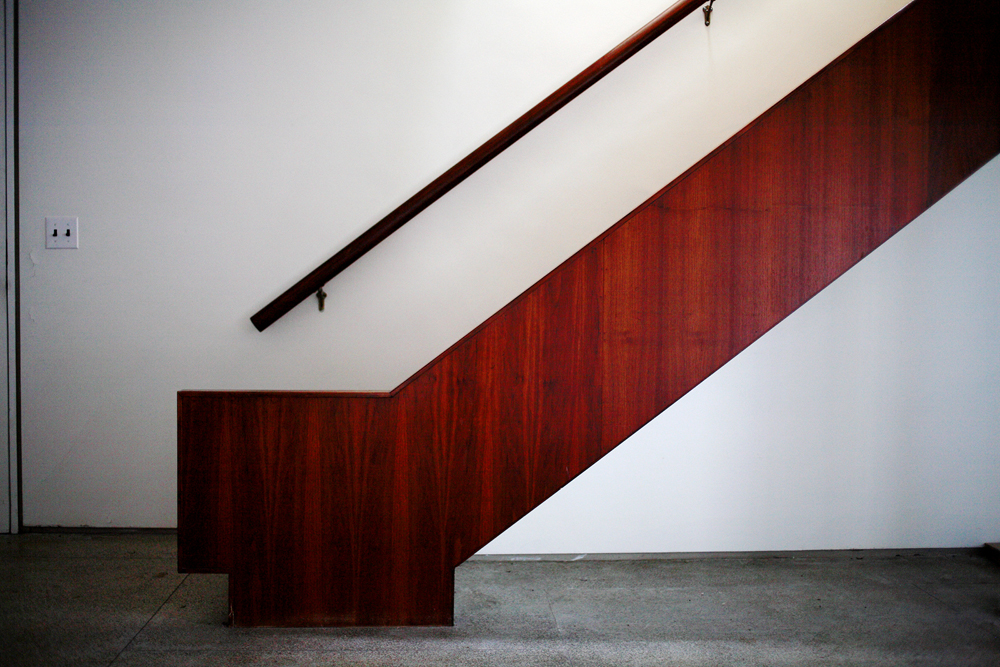 The interior of the Micheels House. 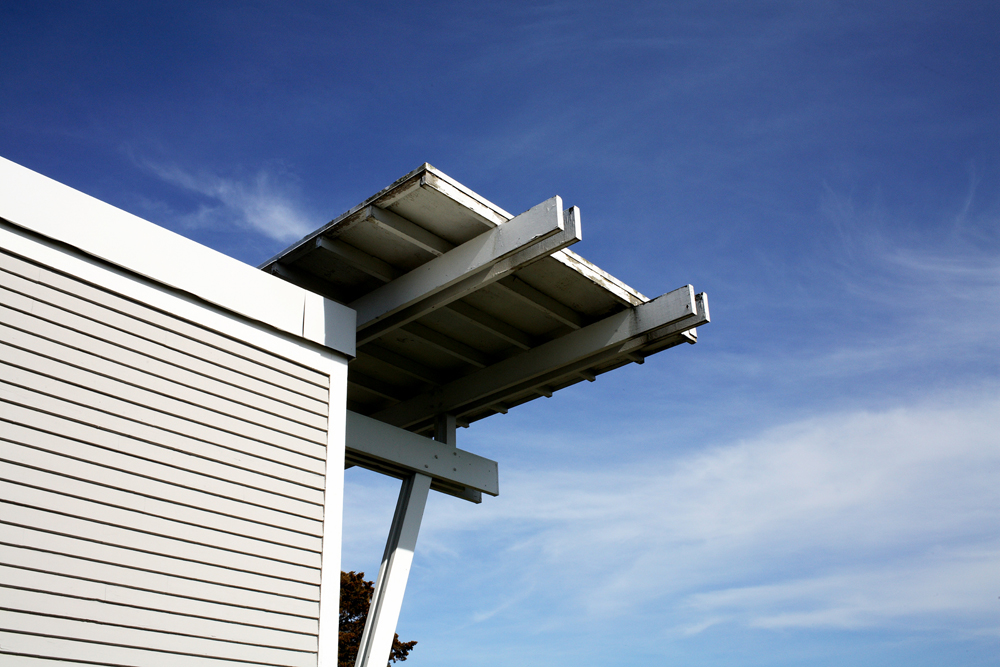 The Cerrito House in Watch Hill, Rhode Island (1956), with detail of the thin, lattice-like structure supporting the “floating” roof. 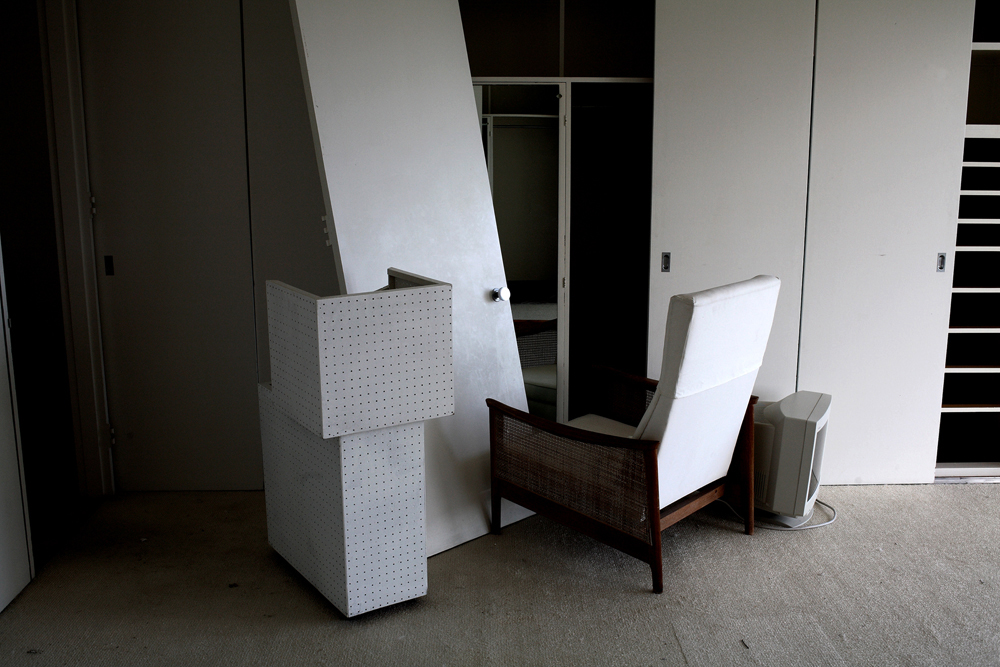 The interior of the Cerrito House. Note the computer monitor. 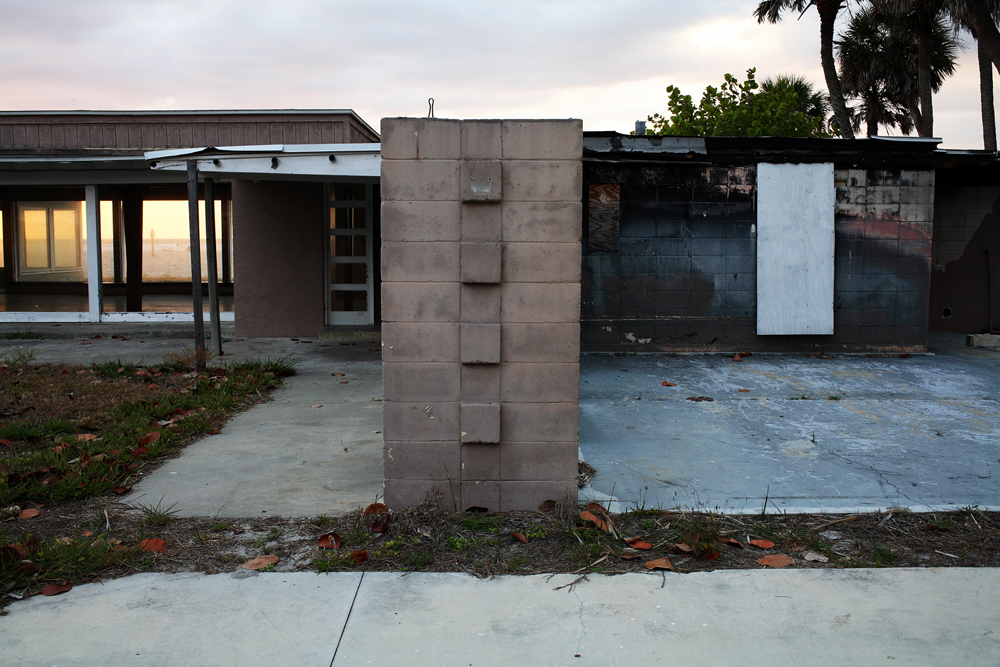 Elevation of the Twitchell House in Siesta Key, Florida (1941). 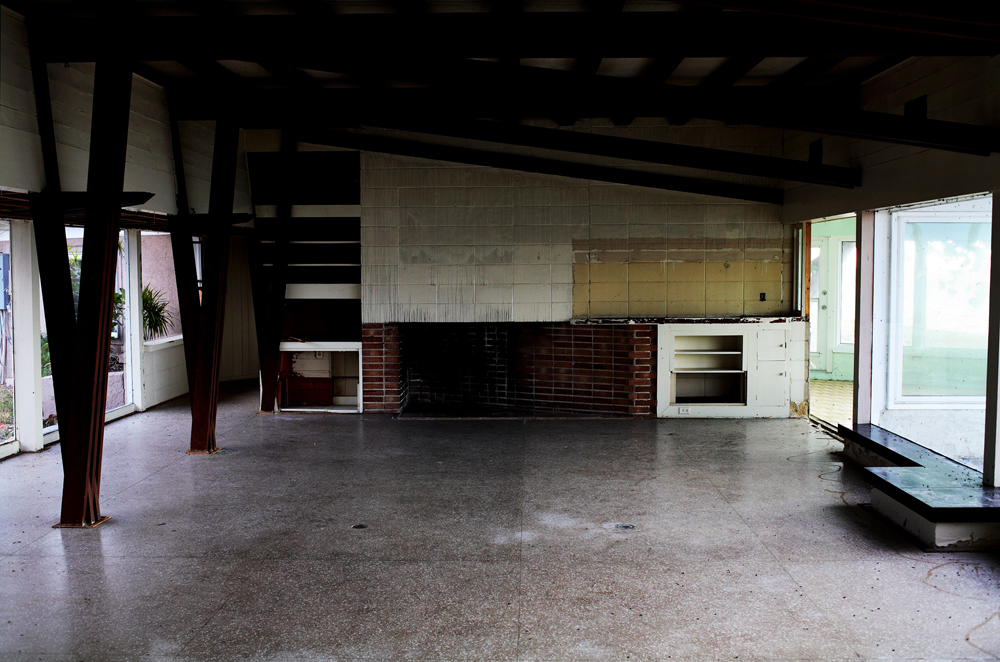 The empty living room of the Twitchell House. 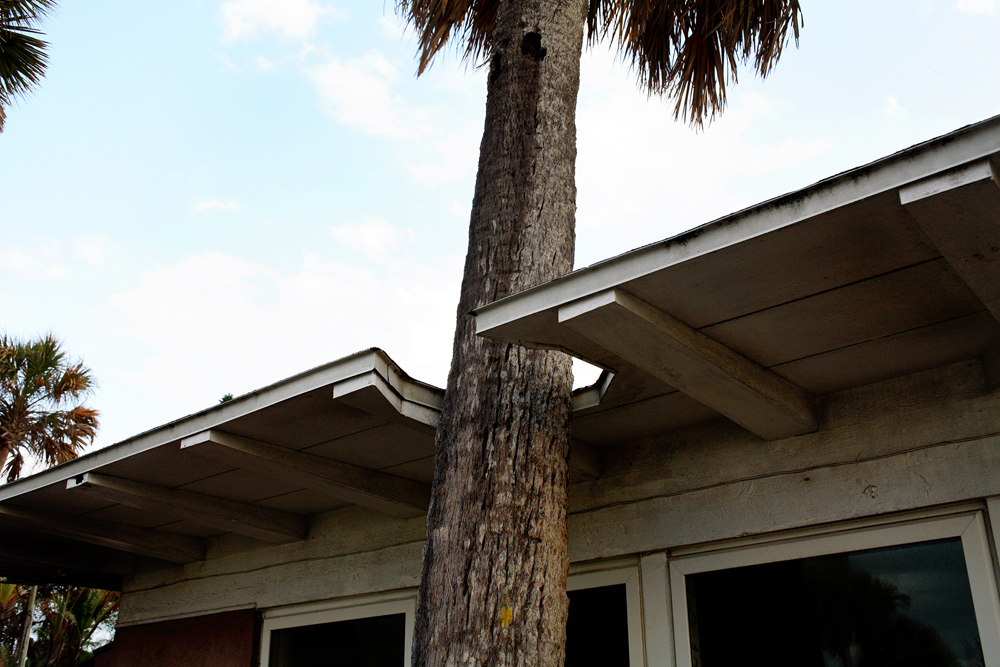 A cutout in the Twitchell House roof accommodates a palm tree. 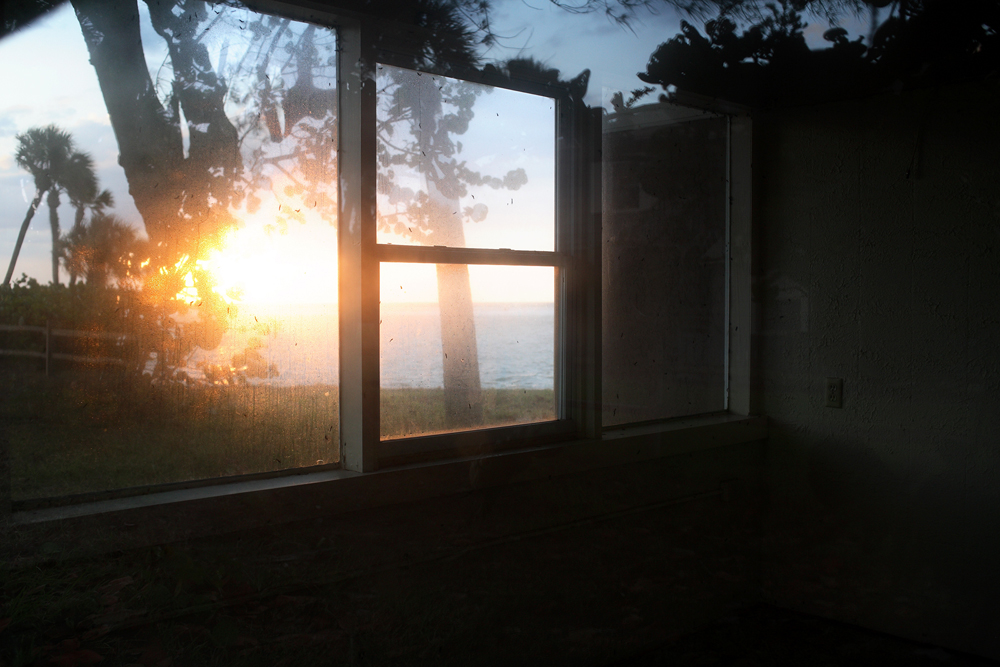 Sunset, from inside the Twitchell House.