Inside DC’s Design Charette for Teens

During week two of the teen design charette for Washington DC’s 11th Street recreational bridge, students learned the history of the project and began sketching/modeling.

Week two of the teen design charette for Washington DC’s 11th Street recreational bridge was a flurry of activity. The students learned the history of the project from representatives of the Department of Transportation who explained that the bridge is at the end of its useful lifespan. Rather than demolishing the entire structure, the city saw an opportunity to salvage the existing concrete piers and explore the possibility of installing a new span across the Anacostia River. This new park would no longer carry 18 wheelers, instead it would support demonstration gardens, exercise facilities, and outdoor performance spaces.

The city hopes to achieve four key objectives through building the new recreation bridge: improve community health, promote the environmental quality of the Anacostia River, stitch together the adjoining neighborhoods that have long been divided by the river, and use the bridge as an anchor for economic development. Over a two week workshop in July, the students’ task was to create programming for the bridge. The results are imaginative and inspirational.

Each student chose programming elements that spoke to him or her and began explorations with design sketches. It took one-on-one discussions with mentors – architects, planners and engineers volunteering their time – to engage students with the crux of the project: What impact did they want to leave on the design of the bridge? Their answers were manifested in drawings, 3-D models, and a formal presentation in front of community leaders. 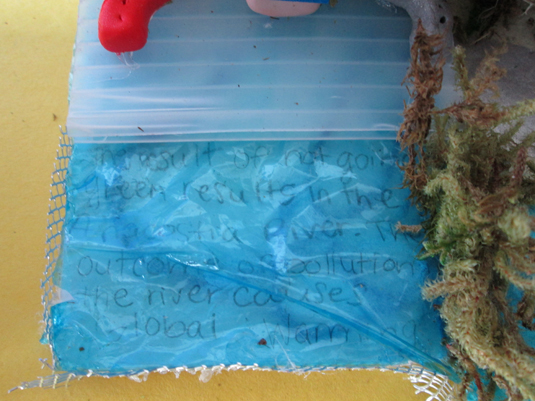 DC teen Tykia surprised me with the vehemence behind her simple answer, “Trees. I really just want some trees and water.” Then she surprised me again. She wanted to create something completely original, like the trees to be seen from both ends of the bridge, for them to be iconic in scale and have a bold visual impact–perhaps something sculptural and incorporating water. The idea rapidly grew into a design that had her complete focus. Chatter gave over to quiet murmuring, knitted brows, and adult mentors running back and forth to the supply room to pull out foam core, toothpicks, and sculpting wire.

Over the course of the second week, we saw design challenges being worked out in intriguing ways. In one case, an obsession to clean up the water turned into an architectural mechanism to filter and draw the Anacostia River itself onto the bridge to supply fountains and irrigate landscaping. But Tykia working with fellow student Darius took it one step further. They wanted to return the purified water back to the river to demonstrate the importance of stewarding natural resources that flow through our cities. 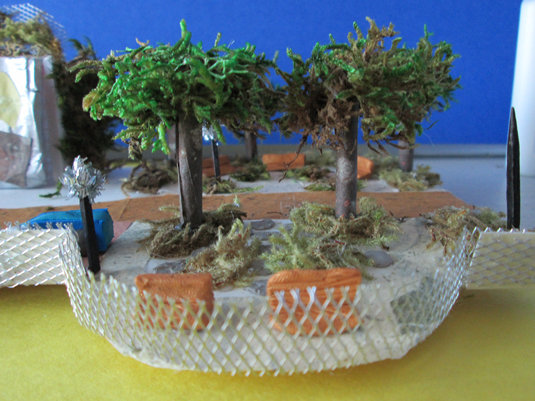 Another student with a fear of heights surprisingly paired a recycling center with a structural glass walkway spanning the width of the bridge. The band of glass flooring would encourage the use of nearby recycling bins through enormous etched words in the glass that emphasize the link between trash and urban watersheds.

A suite of choreographed experiences were strung together with a linear path. Each outdoor “room” has a unique feel to it because of its materiality, light and shade, sound, and relationship to the water. Programming areas were separated by landscaping, balconies, water elements or artistic installations.

Although the participants gave a unique character and program to each space, they also used urban design elements to knit the design together into a cohesive architectural arrangement. In one instance, the unifying thread is an interstitial pedestrian and bike path that would lead visitors through a unified progression across the bridge. Another design team used a formal geometric layout akin to that of formal gardens where a long boulevard facilitates continuous linear movement across the bridge, augmented by deep semi-circular balconies that hold pockets of urban design amenities. The participants composed active and passive program elements at a rhythm and scale appropriate for pedestrians. The overall effect of the work is a pleasing array of regular spaces tying the bridge together into one architectural form.

By Friday, you could witness a model of the recreation bridge that most resembled a bright string of jewels or a delectable box of chocolates–an inspired vision.

At the final presentation, Harriet Tregoning, director of the DC Office of Planning, announced that some of the students’ ideas will be written into a national design competition to be launched this fall. Students will be recognized for their ideas when these are used in the design of the recreation bridge.

The charette provided significant opportunities to young designers who do not have access to the kind of key internships that can help forge the path to professional careers in architecture, landscape architecture, and planning. During the two week opportunity, provided by the DC Office of Planning and local arts non-profit THEARC, fifteen students made their mark on the design of their city’s public spaces. They forged a bit of new ground toward their own undiscovered future.

Catherine Peek was a recent winner of the Washington Monument Ideas Competition for the entry, Field of Stars, an installation of piezoelectric lights that records foot traffic throughout the day. The patent-pending urban design tool is functional for learning at what times and in what volumes pedestrians flow through a space. Such data can be useful in health impact assessments or to developers of transit oriented developments or other pedestrian walking malls. She received a Master of Architecture from Rice University and has worked five years in the field. Inspired by innovations that make cities livable, Catherine is looking for professional opportunities in urban design.