PIE’s workspace encourages collaboration among a curated “class” of entrepreneurs.

This is the first post in a blog series devoted to design culture in Portland.

Filling a city block at NW 13th and Everett, Wieden + Kennedy (W+K) looms over Portland’s creative community. As the world’s largest independent advertising agency, W+K has always felt just a hair too glamorous for this reformed logging and shipping town. Its Portland headquarters occupies a unique position in the city, both in size (around 400 employees), and centrality (Nike and Intel are bigger, but are off in the suburbs). For the smaller, scrappier creative companies dotting the town, it’s a fixed reference point: Everyone’s been to a party or lecture there, has had W+K as a client, or has even hired an ex-employee. The building, a converted 1908 warehouse, even features in a Portlandia sketch.

Still, the most interesting story on the block may not be inside W+K HQ, but on its periphery—in a small storefront space at the corner of NW 12th and Davis that houses the Portland Incubator Experiment (PIE).

Walking into PIE is very different from entering the mothership around the corner. Instead of an airy atrium dominated by a wooden statue of a pixelated beaver, you get, well, a mess. Purposeful people in logoed T-shirts or untucked plaid roll their ergonomic chairs around the bare concrete floor, laptops in tow, taking care to avoid the tangle of power and data cords that snake everywhere. To the right, a hefty wooden column is adorned with Twitter handles written in Sharpie, and stickers bearing names like Code Scouts, Orchestrate, and Cloudability.

The idea behind a tech incubator like PIE is to gather a group of aspiring, tech-focused entrepreneurs into a single (usually physical) space, and do everything you can to turn them into viable businesses. The model’s influence is greater than you might think: Airbnb, Dropbox, and reddit, for example, are all graduates of Y Combinator, a Silicon Valley incubator where they worked on their product before finding success.

Like many incubators, PIE inducts a new “class” of entrepreneurs once a year. Each individual is supplied with a workspace, mentorship, and a small amount of funding ($20,000 per company, in PIE’s case), and challenged to improve both product and business over an intense, three-month work period, culminating in a peer-reviewed Demo Day. In return for running and funding PIE, W+K gets a small percentage of equity in each company. In the competitive landscape of modern tech, where smart people have great ideas but often struggle to translate them into viable products, it’s a model that works pretty well. 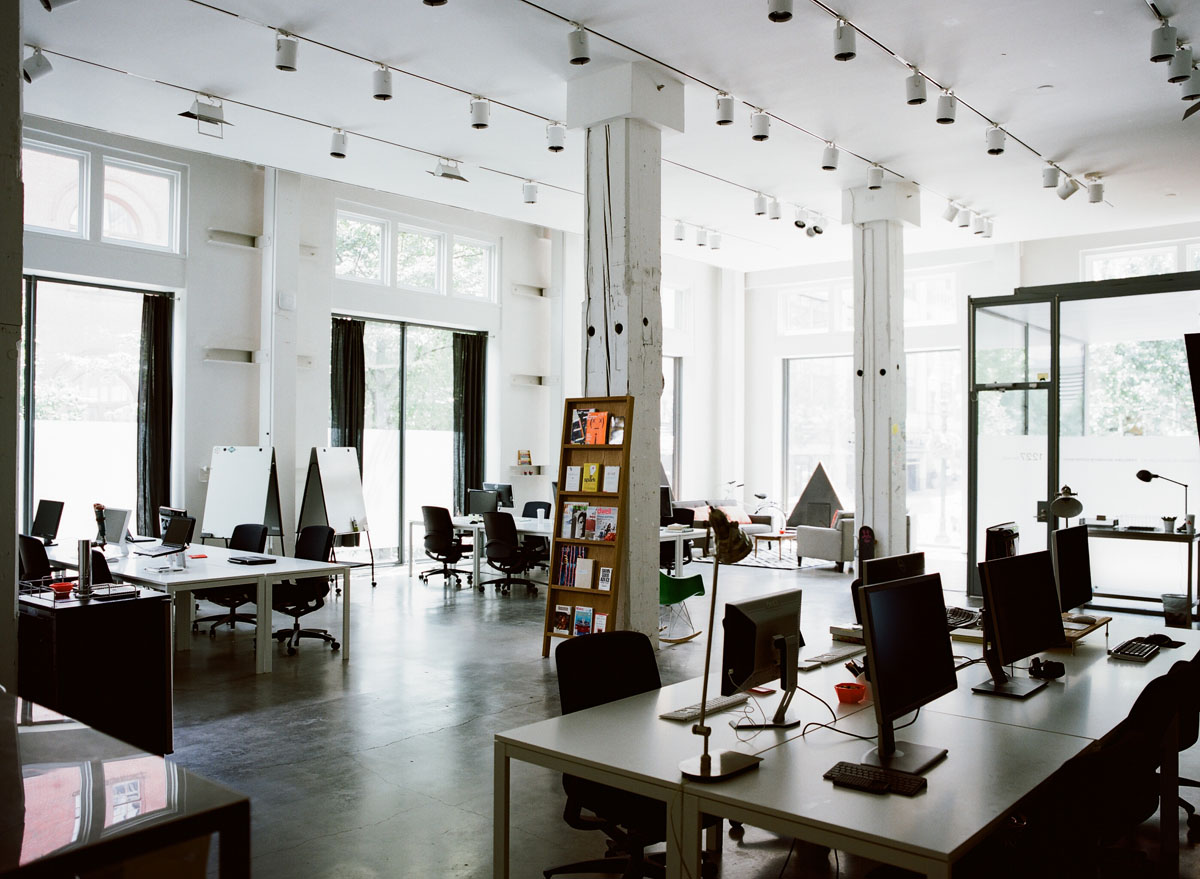 Renny Gleeson, W+K’s Global Director of Interactive Strategy, explains that the initial goal of PIE was simply to bring some of the startup world’s “techno-cultural excitement” into close proximity. Or as he puts it, “It was an investment in culture.”

W+K had already opened its doors to the local tech community by hosting events like Ignite and Bar Camp, but as Gleeson explains it, the agency wanted a closer tie with what it saw as one of the modern era’s great wellsprings of creativity. A series of conversations with Rick Turoczy, whose Silicon Florist blog is effectively the paper of record for the Portland startup scene, raised the idea of turning a vacant retail space in W+K’s southeast corner into a startup-friendly workspace. Coworking spaces have been fundamental to Portland tech for years, but conversations between Gleeson, Turoczy, and similarly-minded conspirators kept returning to the idea that the city’s startups needed a community, not just a place to work.

The first iteration of PIE, started in August of 2009, was simply a curated take on coworking. With W+K’s blessing, Gleeson and Turoczy began inviting developers and entrepreneurs to use the space for their projects, free of charge, taking care to bring in participants with the potential to aid and learn from each other. In its inaugural year, PIE hosted founding members of transformative companies like Kickstarter and Simple, but most participants only came in sporadically, leaving the promise of a vibrant support community unfulfilled.

“The space was working and the collaboration was working,” recalls Turoczy, “but we [PIE and W+K] were playing a very passive role.” After 18 months PIE relaunched, this time with “a formal application process, review committees, demo days—all that, while retaining the ‘curated collaboration’ approach from before.” It also included funding, and a formal relationship with W+K’s creative staff to help fledgling companies make sure their brand was as solid as their product. A featured story on the PIE website, in fact, focuses almost entirely on a brand transformation, in which a social marketing platform called Plexus Engine became the much more consumer-friendly Little Bird (as in “a little bird told me”). 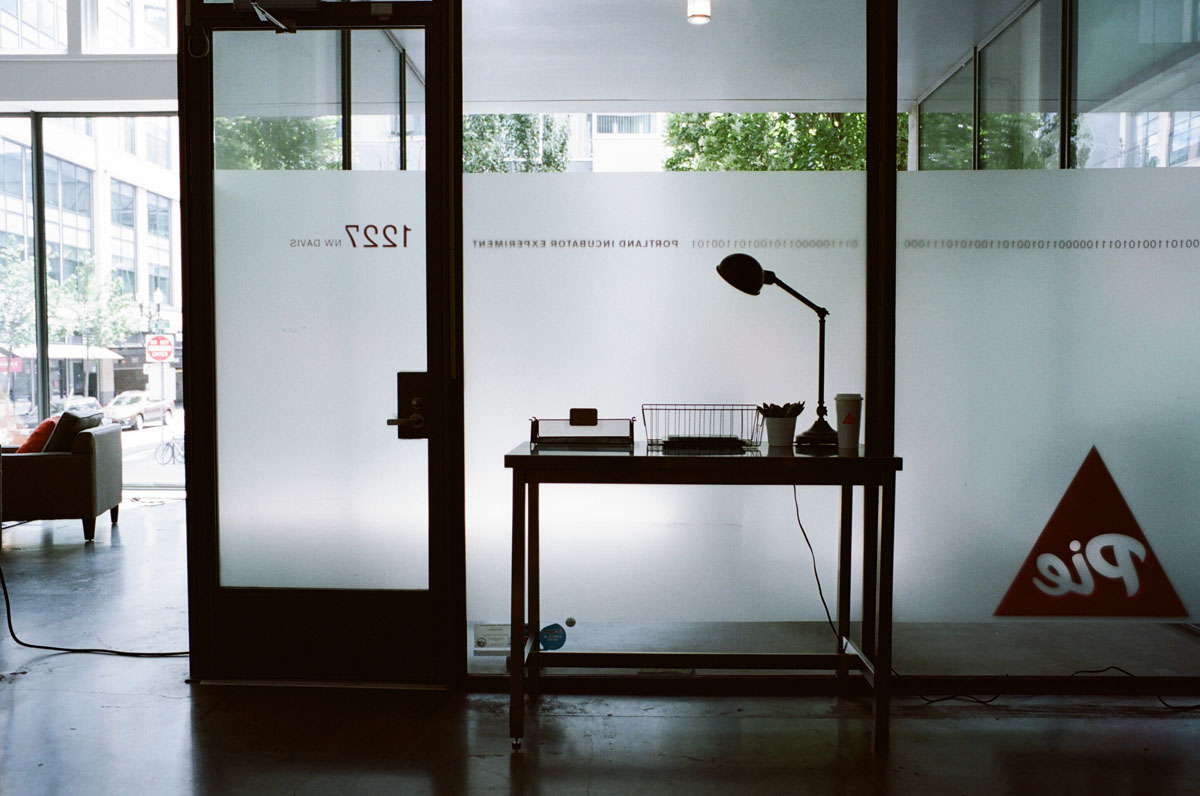 The inconspicuous entrance to PIE, which is housed inside Wieden + Kennedy’s Portland headquarters.

Today, PIE boasts over 40 graduate companies, the vast majority of which are still in operation. Many now act as PIE mentors themselves, and several have become mainstays of Portland’s tech economy. I could tell you some names—AppThwack, Urban Airship, the aforementioned Cloudability—but it’s unlikely those outside the tech sector would recognize them (none make consumer products). Urban Airship, for example, has no smartphone app of its own, but has pioneered various features of “push” notification that other apps vastly more useful. AppThwack offers a tool for testing new apps simultaneously on multiple platforms, making it easier for developers to get their products to market.

This tendency to make things that empower others turns out to be characteristic of Portland’s creative community, tech-related or otherwise. The technology and business press often celebrates disruption and the dramatic reshaping of industries; think of the attention and adulation heaped on companies like Uber, Amazon and Netflix. By contrast, Portland tends to embrace, as Rick Turoczy puts it, “very creative technical people building tools to make their peers better at what they do.” Tech professionals who move here from elsewhere are often surprised by the openness with which their peers discuss their latest projects—often over a locally brewed beer—and the vast number of meetups, knowledge shares, and ad hoc lectures that occur, often with attendance into the hundreds.

Neither PIE nor W+K can take credit for originating this culture. It’s actually been this way since Tektronix kicked off the Oregon tech scene in the late ‘40s by inventing the oscilloscopes that enabled so many other inventors to flourish. But as a caretaker of that culture—an incubator, if you like—there’s none better.

Carl Alviani is a writer and editor at Ziba, working with the studio’s many designers to tell their stories to clients, publications, and the global creative and business community. He brings 7 years of writing and 6 years of design experience to Ziba, having served as a contributing editor at design magazine Core77, and as a freelance writer and industrial designer. He holds a Masters in Industrial Design from the Pratt Institute, and has written or contributed to articles for WIRED, Fast Company, Design Management Review, Forbes and Arquine.

Metropolis publisher/editor in chief Susan S. Szenasy will be in conversation at Design Week Portland, Tuesday, October 7. Register for the event here.