When the press release was sent out about Mobile Art’s imminent arrival back in July, the renderings had me thinking that Planned Parenthood would be ecstatic with its worldwide haute couture representation.

However, at Monday’s press preview the completed structure brought up a different image. Somewhere in the back of my kitsch-infested mind I felt this was not the first over-the-top architectural/cosmetic/fashion mashup on record. Koolhaas and Prada, yes. Gehry and Tiffany and Company, yes. But where else? And then it suddenly dawned on me—The Brady Bunch.

Lest we not forget the patriarch of the Brady clan was an architect. In the series first season Mr. Brady is visited by one extremely eccentric makeup magnate, Bibi Galinni, in a show entitled “Mike’s Horror Scope.” Ms. Galini desires a factory that represents her style—a compact, a tube of lipstick, or a powder puff.

Have some time on your hands? Here’s the full episode—I can’t imagine that the meetings between Karl Lagerfeld and Zaha were any less fabulous. 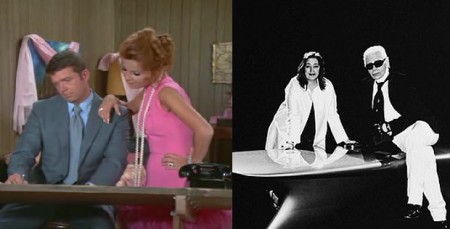 But what I find really amazing is how not so far off Zaha’s finished product is from Brady’s initial powder puff sketch. I think, perhaps, the only difference in characters or scenarios is that Mike Brady turned down the fanciful commission.

Architect wars: Whose idea was the biomorphic powder puff?

Putting all boob tube references aside, the art project that has invaded Central Park (it’s already shown in Hong Kong and Tokyo with future stops in London, Moscow, and Paris) brings to New York some good things, namely cash. Chanel has forked over $400,000 to the city for a use fee and there’s also been an unnamed sum donated to the Central Park Conservancy. Plus, there seems to be some unexpected cash flow to the city—NY Times reports that an oversized ad on Chanel’s New York flagship that announced the arrival of Mobile Art was a big no-no in the zoning department. Chanel could be fined up to $30,000.

Entry to the pavilion is free but tickets must be reserved on site at the box office for same day ticketing (I was told that 30 entrants would be permitted into the show every 15 minutes). Central Park’s last large art installment, Christo’s The Gates, while also free, generated an estimated $250 million in tourist revenue. Since Christo’s project was installed for 16 days (February 12—February 28, 2005) and Chanel’s will be on view for 21 days (October 20—November 9, 2008), it stands to reason that the Hadid/Lagerfeld union could produce even more revenue for New York.

The building is exactly what you would expect from Hadid—an inventive structure that catches the eye and intrigues from the outside with strange spaces resulting on the inside. There’s been much discussion about art spaces being over designed, detracting from the art they are supposed to shelter. And this pavilion is no different. The better pieces on display were those in rooms that lacked exaggerated nautilus-like swoops and curves; in other words, Hadid-sensory deprived.

The pavilion consists of an engaging collection from twenty international artists. Some of the pieces are more blatantly tied into the Chanel handbag—nude models tied up in the iconic chain and leather purse straps—while others are less obvious—a projection of ever-changing animal images in a funnel-shaped hole. 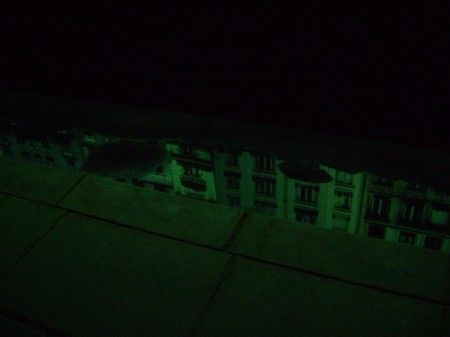 The time-lapsed reflections of Le Trottoir (The Sidewalk) by Leandro Erlich of Argentina are contained in a small darkened room. Chanel awnings can be seen in this street secene. 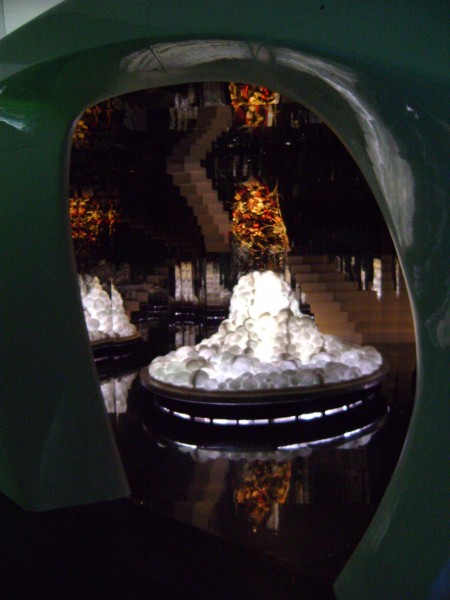 Light Years, topped with leather scraps fromChanel handbags, by Lee Bul from South Korea is in its own mirrored chamber. 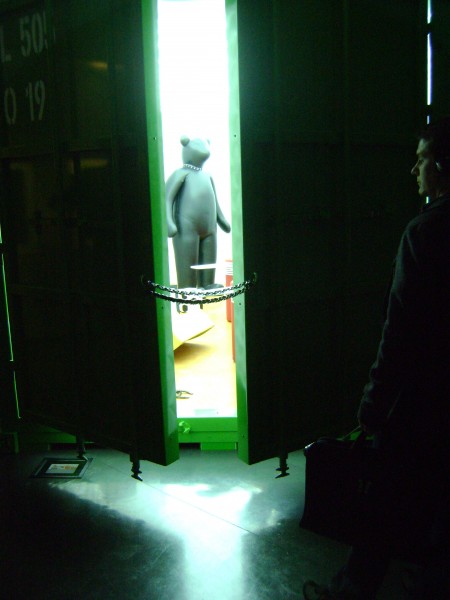 Fabrice Hyber’s work (with an S&M bear!) is contained in the padded walls of a shipping container 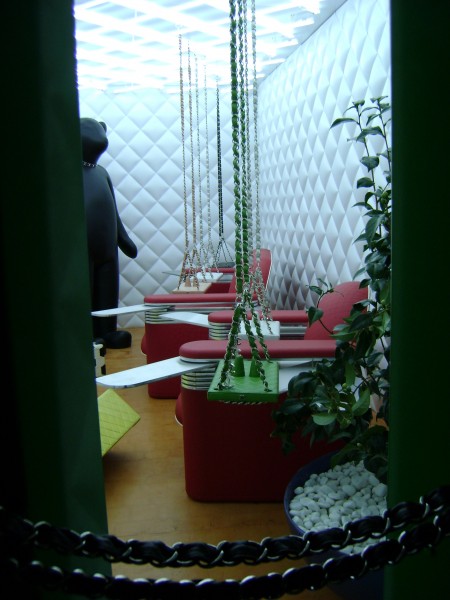 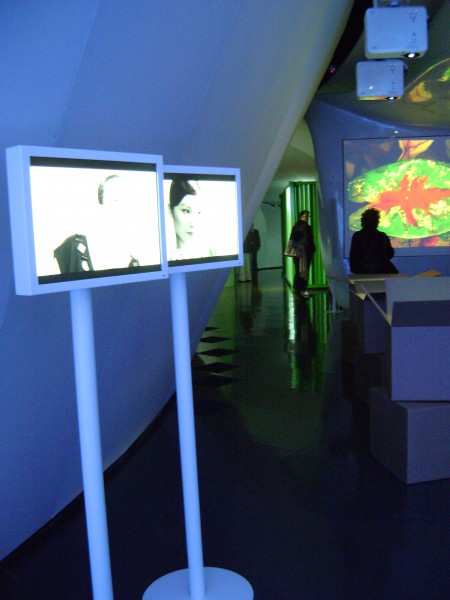 Several pieces of art within a Hadid-created hallway

The guided tour by French actress Jeanne Moreau (the Chanel associate who set up my mp3 with the correct language and volume explained Moreau was the obvious pick because her raspy voice is reminiscent of Coco) starts off slow and lazily invites you into the show to be a voyeur with her. One journalist I know took off his headphones long enough to tell me the guided tour was too laborious and I agreed. By the end of the tour I realized the languid timing with the accompanying soundtrack made you slow down enough to examine the art.

Is the art award winning? No. Is the pavilion award-winning? Certainly not. But it’s a respite from a city dweller’s daily grind and a nice addition to an autumnal walk through Central Park. It’s also only temporary.