The Guggenheim rotunda is transformed into a sublime skyspace in James Turrell’s new exhibition.

The one word that could be heard echoing in the cavernous space of the Guggenheim rotunda during the opening of James Turrell’s exhibition was “spiritual.” Bathed in an otherworldly glow the rotunda bore little resemblance to the space designed by Frank Lloyd Wright. The disorienting lights that transformed the rotunda made it hard to find a better word to describe the experience.

What inspired this sense of the religious was the site-specific installation Aten Reign, the focal point of Turrell’s retrospective at the Guggenheim. However, what could be found behind these religious connotations was a highly calculated process. Gathered at the bottom of the rotunda, visitors gazed up at elliptical bands of light undergoing constant transformation due to the daylight streaming from the oculus of the rotunda and a complex set of LED fixtures. 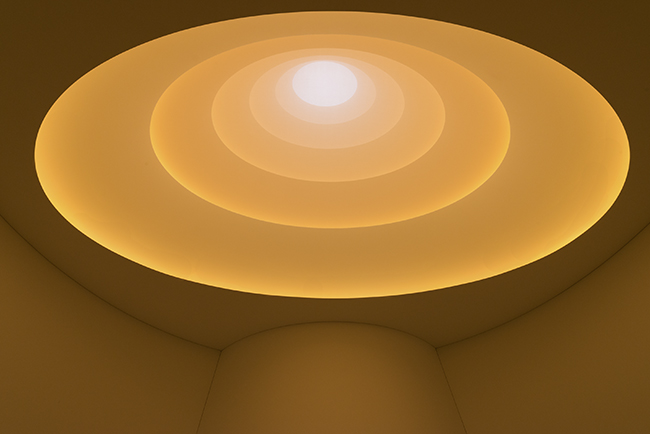 In the contemporary art world still dominated by postmodern cynicism, Turrell’s work is disarmingly direct and earnest, provoking almost primal reactions. Turrell himself embodies the mysticism of a shaman while retaining a deep connection to the land and the physical. In one of those serendipitous convergences of art and biography it seems as though all of Turrell’s life experiences brought him a step closer to where he currently stands. Brought up in a devout Quaker family, Turrell went on to study perceptual psychology and mathematics, all the while nursing his interest in art. For years relegated to the periphery of the art world, Turrell has finally come into the light. 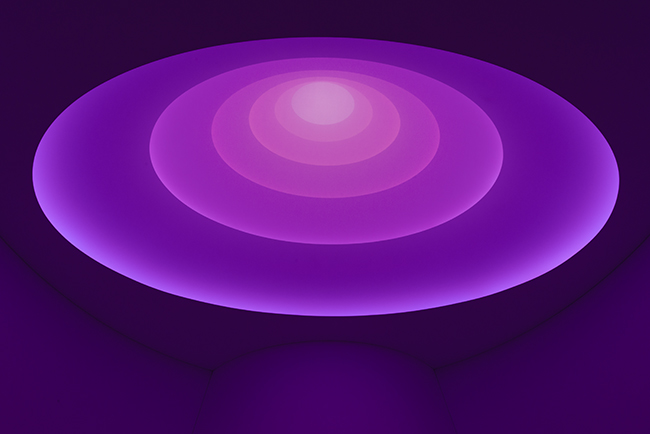 The Guggenheim is not alone in celebrating the artist this summer. Two other major exhibitions at the Los Angeles County Museum of Art and the Museum of Fine Arts Houston speak of the relatively recent fascination with Turrell sweeping the cultural sphere. Curated by Nat Trotman and Carmen Giménez the Guggenheim exhibition offers one of the largest installations the artist has ever mounted.

The Aten Reign is undoubtedly magnificent, a marriage of loud spectacle and quiet spirituality. It is mythical both in source and effect; its title coming from the Egyptian sun deity, the work demands complete surrender from its viewers. The color spectrum fluctuates between the subtlety of diffused cathedral light and the hallucinatory spectacle of 1980s sci-fi. At moments the light feels material and tangible while at others it slips into abstraction. The whole installation seems to fluctuate, appearing to come closer at times and retreating at others. Our eyes and mind grapple to make sense of what’s in front of them, overcome with the feeling of what Turrell calls “seeing yourself seeing.” 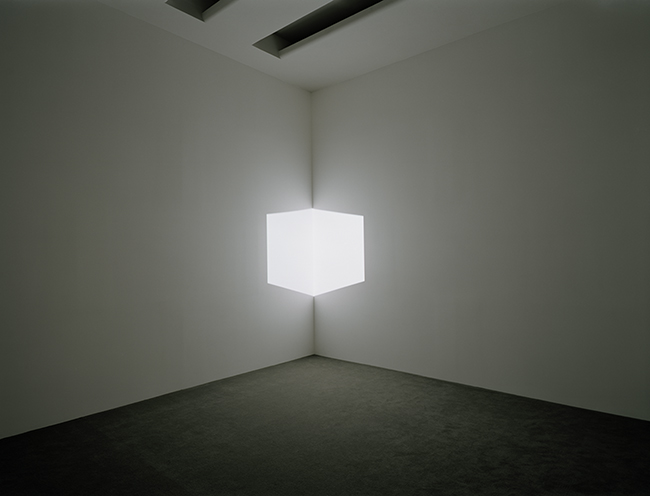 Aten Reign is complimented by four other installation pieces, which illustrate the development of Turrell’s career. After the flashiness of Aten Reign the subtleties of the other works can be found wanting. They are subtle reflections on themes of light and space that require time and effort before revealing themselves to the viewer.

Frank Lloyd Wright designed the entrance to the rotunda as a space where the visitors would congregate following their trek down the spiral and where they could reflect on the art they’ve seen. Turrell is not the first artist to make use of the Guggenheim rotunda itself, but what seemed a gimmick with Maurizio Catellan’s retrospective, in which the Italian artist’s works were hung from the ceiling in a cacophony of objects, in Turrell’s sublime installation the Guggenheim comes a step closer to becoming the “temple of spirit” that its first director Hilla Rebay envisioned it as.