A developer who combines a keen feel for the housing market with a genuine commitment to social justice, good urbanism, and green building. 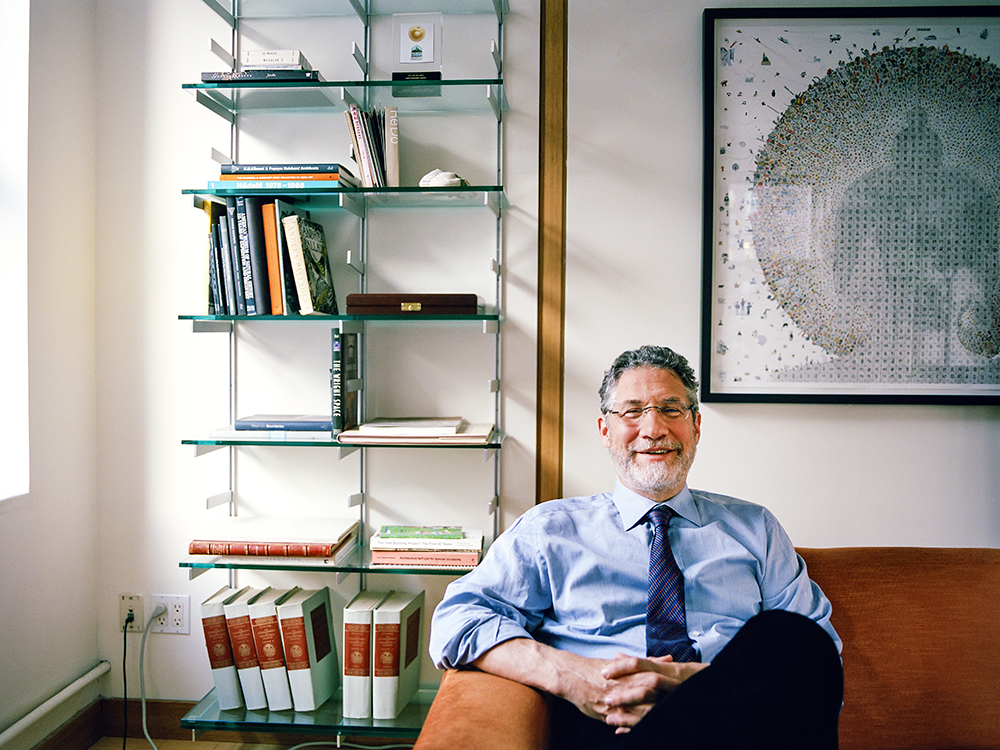 From his high-rise office with expansive views of Manhattan, Rose masterminds developments with a strong social component and good street presence.

In the devil-take-the-hindmost world of urban real estate, there’s little room for sentiment. Promises are broken; people get shunted. One need look no further than the much-publicized Atlantic Yards project in Brooklyn for a case study in how things get done in America’s biggest cities: There, developer Forest City Ratner Companies pushed through its new sports arena in part by promising that below-market-rate housing would be built alongside it. The Barclays Center opened last year to much fanfare; the housing, however, is still nowhere to be seen.

In such a brass-knuckles industry, then, there’s a natural expectation that anyone entering it with a sense of social purpose must be possessed of either an extraordinarily durable idealism or a very hearty brand of naïveté. There’s at least anecdotal evidence to back this up. [Full disclosure: the author’s grandfather was involved in affordable housing construction for four decades in New York City. He went broke on at least one occasion and was nearly imprisoned.] The rap on do-gooders is that they are not, by and large, business-savvy professionals.

So it’s bit of a surprise to ﬁnd that Jonathan F. P. Rose—arguably the nation’s foremost developer of affordable, environmentally sensitive, socially conscious housing projects—is all business. Entering the Jonathan Rose Company’s cushy Manhattan digs, visitors may be instantly impressed by the sweeping views over midtown Manhattan from the founder’s spacious private ofﬁce. But don’t gaze too long. “No time to look out the window,” says Rose, setting himself up on a sleek, low-slung couch. “I’ve got meetings the rest of the day.”

Rose, 61, is energetic, candid, and speaks in the rapid-ﬁre patois of a man very much on the go. He often ﬂashes a knowing smile to signal that he senses in advance which way a question is heading, and is already burnishing his response. The only thing about him that seems even faintly ethereal is his somewhat professorial beard (though even that, it will be noted, has recently been spotted on business leaders like Goldman Sachs’s Lloyd Blankfein).

The scion of a prominent New York real estate family, Rose has been steadily recasting the image of the social entrepreneur since the late 1980s. “I’ve always been interested in real estate development,” he explains, “in how low-income communities can grow and develop, as well as in the environment. Really since I was a child.” Rose started embracing that passion in earnest in 1989, when he ﬂew the family coop to start his own outﬁt; but even as he branched out into more innovative and civic-minded development projects, he never quite shook the determination of his prosperous forebears to run a business that made money. At the outset, he says, “The challenge was, could one create a for-proﬁt social and environmental impact–focused business?” 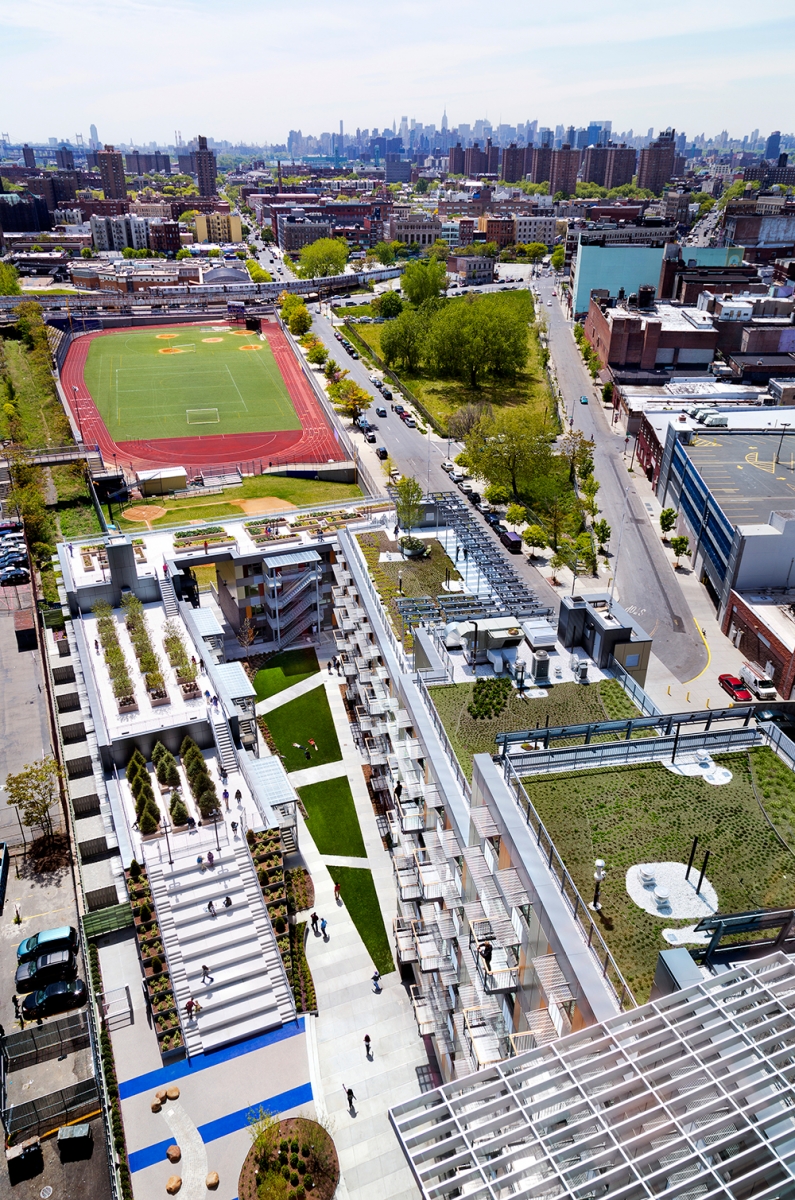 A design collaboration between Dattner Architects and Grimshaw, Via Verde in the Bronx is a groundbreaking mixed-income housing development that includes a series of tiered geometric gardens and green roofs.

His path to that challenge wasn’t so straight as he sometimes makes out, however. Improbably, the ﬂourishing developer of today began his professional life as the founder of Gramavision. From 1979 until he sold the brand in 1993, Rose was responsible for recording and distributing some of the most important avant-garde and progressive musical acts of the 1980s, among them Medeski Martin & Wood, the Kronos Quartet, and jazz guitarist John Scoﬁeld. But as the music industry began to change, he decided it was time to move on. “I was working day and night,” he says, juggling music and his family’s business interests. “I realized I had to focus. I couldn’t do everything.” A good ten years before the digital revolution would swamp the conventional recording industry, Rose saw that the business model was losing ground and decided it was time to put down his axe and put on his business suit.

It would not be the last prescient decision of the developer. Signiﬁcantly, Rose’s ﬁrst major attempt at a full-scale urban renewal project was in the same neighborhood where Forest City Ratner pulled its recent bait-and-switch. In 1985, still under the aegis of his parents’ company, Rose attained the rights to what was then called the Atlantic Terminal Urban Renewal Area in Brooklyn. It was, notes Rose, among the earliest projects of its kind anywhere, “one of the ﬁrst mixed-use, mixed-income, transit-oriented development plans.” The basic pattern foreshadowed what Rose and others have been doing successfully in the decades since, but in the mid-eighties, the Terminal proposal was so ahead of its time that it drew legal action from what today would seem an unlikely quarter. “All the suits were environmental in basis,” Rose says. “At that time, the environmental movement just believed that developing in the city was evil.” The project was blocked, stalled by a recession, and then Ratner took over.

His inveterate pragmatism means he’s not hung up on creating splashy starchitectural statements.

“We’ve completely reversed that,” Rose continues. “Today, we believe mixed-use, mixed-income is smart.” With environmental groups recognizing that dense, efﬁcient urban development is the best antidote to suburban sprawl, the Jonathan Rose Company has found ready allies in city after city. In Santa Fe, New Mexico, Rose and his partners started work in 1989 on the Second Street Studios, a live/work complex with on-site retail, galleries, and restaurants; three years later in Denver, Colorado, the team pulled together no fewer than than 23 sources of public and private funding to restore the historic Denver Dry Goods Building and turn it into a mix of low-to- market-rate apartments and condos, as well as ofﬁces and retail spaces. To date, the company has spurred $1.5 billion worth of development, spread out over the dozens of projects in its portfolio. And Rose says that business is getting better. “We’re ﬁnding it easier and easier to ﬁnd ﬁnancing,” he claims.

“Jonathan is a rare combination—someone with a strong market sensibility and also a sense of social justice,” notes his friend and colleague John Norquist. As mayor of Milwaukee for sixteen years and now head of the advocacy group Congress for the New Urbanism (CNU), Norquist has ﬁrsthand experience trying to turn troubled neighborhoods into sustainable communities. What sets Rose apart, Norquist says, isn’t just his commercial acumen, but his ability to see how his own company’s viability and the viability of its projects ﬁt into a broader political and economic framework. “He’s trying to change the whole system,” Norquist says. To that end, Rose has collaborated with Enterprise Community Partners and others to lobby Washington for the expansion of tax credits and the retooling of housing subsidy rules so that developers like him have a greater ﬁnancial incentive to build quality housing for the poor and working class. 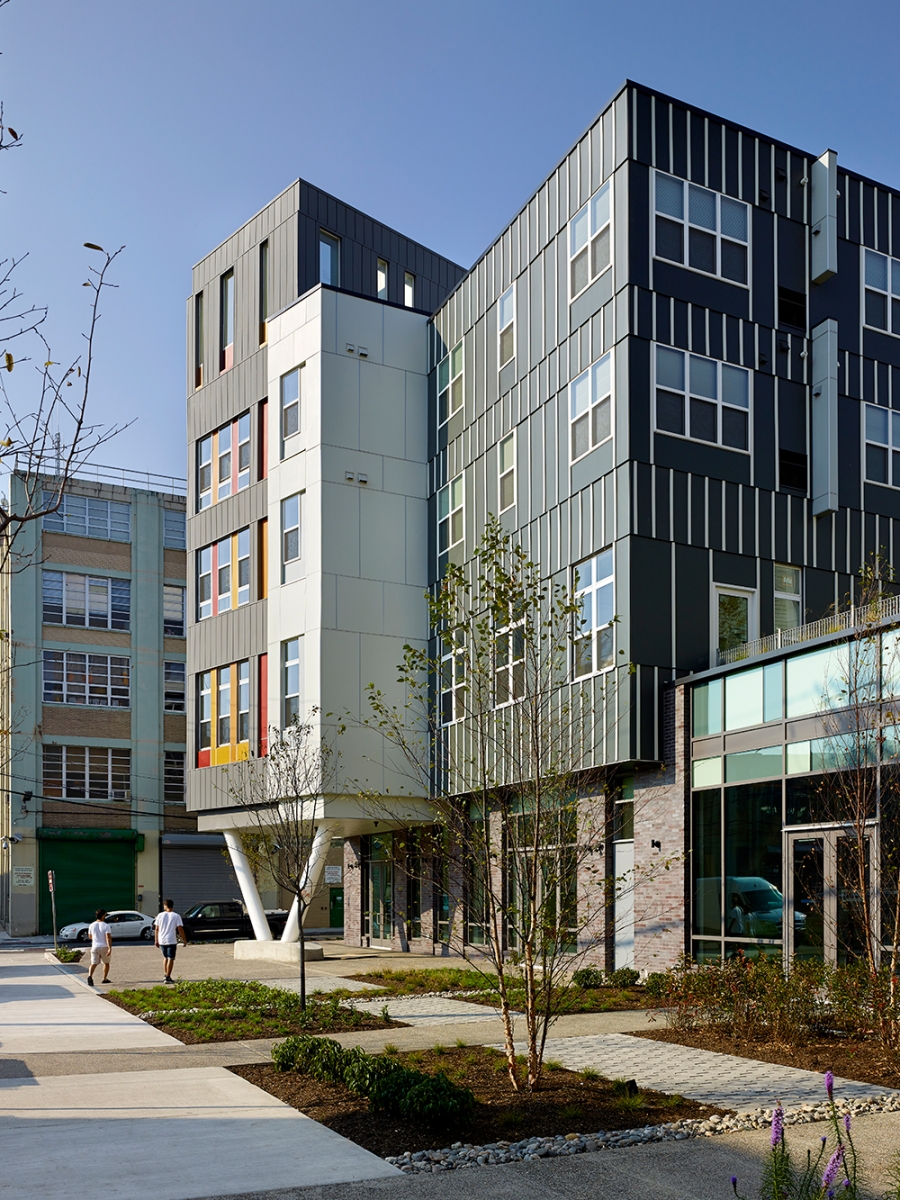 Paseo Verde in Philadelphia is the first in the United States and the second in the world to achieve a LEED Platinum rating. It has 120 affordable and market-rate apartments and 30,000 square feet of commercial and community space.

What constitutes quality, by Rose’s measure, can be gauged by looking at what has been, perhaps, his company’s most lauded project yet—the Via Verde apartments in the South Bronx (done in collaboration with Phipps). The building is an all-in-one index of the values Rose is trying to introduce to the marketplace: its 151 rental and 71 co-op units are available to tenants from a fairly broad swath of the economic spectrum, from low to middle income; the complex includes wellness facilities, bicycle storage areas, and is situated close to public transit; it’s replete with ecofriendly features, including a comprehensive rainwater collection system; and it’s topped by a series of interconnected green roofs, complete with a garden club that grows produce for residents. “It makes palpable this idea of integration,” says Rose, bringing together “the well-being of people, of the city, and nature. And it’s architecturally distinctive.”

The question of Rose’s architectural values is an interesting one, because his inveterate pragmatism means he’s not hung up on creating splashy starchitectural statements. “His thinking is much more related to the fabric and texture of communities, rather than to the look of the individual buildings,” says William Stein, a principal at Dattner Architects, one of the ﬁrms behind Via Verde and a number of other Rose developments. “What might be right for one place wouldn’t be right for another.” On 153rd Street in Harlem, another Dattner/Rose project, The David and Joyce Dinkins Gardens, highlights some of the same social and environmental features as Via Verde, but does it in a simple, contextual building nothing like Via Verde’s striking stepped outline. Likewise, many of his recent projects—like 2010’s Silver Gardens in Albuquerque, New Mexico—are remarkably modest in appearance. On this point, at least, Rose appears to have the eye for cost-saving and efﬁciency one might expect of a commercial developer.

Surely there can’t be many in the ﬁeld who share Rose’s sense of futurism, his ability to look down the road and see where American cities are headed and what ought to be done to get them there. Thirty years ago he was trying to sell Brooklyn on a multi-use, high-density redevelopment program; today, he’s talking about things like “collaborative consumption”—buildings and communities with shared property like cooking utensils and hardware—and “cognitive resilience”—creating neighborhoods with durable social networks that can withstand traumatic disruptions like Hurricane Sandy. He’s already starting to build these ideas into some of his upcoming projects, and, intriguingly, one of them will bring him right back to where it all began: one of the last undeveloped lots near the Brooklyn Academy of Music lots, was retained by the city, and recently awarded to Rose’s firm via an HPD competitive bid process.

EyeBAM, as the project is called, will be a cultural center with a difference, one that “mashes up cutting-edge art and technology” with science exhibits, a restaurant, and more. “Green roofs, collaborative consumption—it’s got the environmental, social, cultural, and transit aspects, all together in one great building,” Rose says. His enthusiasm for his latest endeavor seems a perfect blend of true-believer-ism and pitchman pizzazz. But he doesn’t oversell it. Moments later he’s on his feet, shaking hands, and off to his next meeting.