This is the first solo museum exhibition on J. Mayer H., the Berlin architecture studio founded in 1996 by Jürgen Mayer H. (That edgy extra “H” is Mayer’s middle initial, transposed for effect.) The title—”Patterns of Speculation”—alludes to the firm’s enduring fascination with data-protection patterns, those arrays of numbers, letters, and symbols that often line the inside of bank envelopes. But while the studio’s work is appropriately dense and patterned, it’s not exactly opaque. Projects like an angular student center in Karlsruhe, Germany (above), completed in 2006, are formally complex while retaining a sense of playfulness. For the SFMOMA installation, the architects wanted to give museumgoers a firsthand experience of the “information mist” that informs their work—hence the high-intensity crush of animated data patterns, architectural images projected onto the gallery walls and ceiling, and more. Granted, most of us already feel like we’re floating in an information mist (or haze or trance) much of the time. But don’t let that deter you from seeing the work of one of Europe’s most interesting firms in an environment of its own devising.

More project images after the jump. 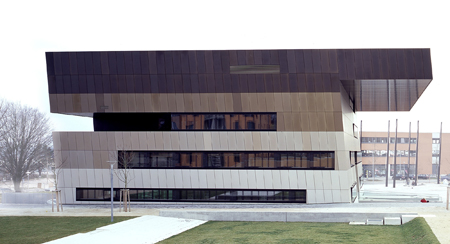 This town hall in Ostfildern, Germany, houses offices, classrooms, and exhibition space. What appears to be a fairly simple box has actually been slanted backward a few degrees—”just enough to generate a mild sense of unease,” the curator Andres Lepik writes in Hatje Cantz’s new monograph. 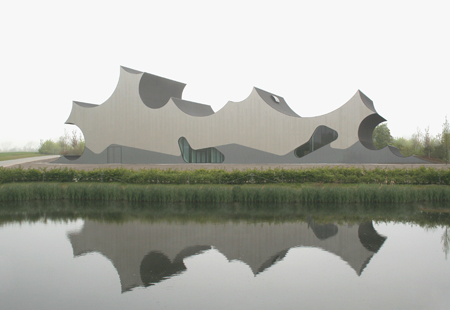 For Danfoss, a Denmark-based manufacturer of HVAC components, the architects created a public-experience park called Danfoss Universe. The “curiosity center” (above) was completed in 2007; a restaurant with a similar swooping, science-fiction form is slated for a second phase of construction. 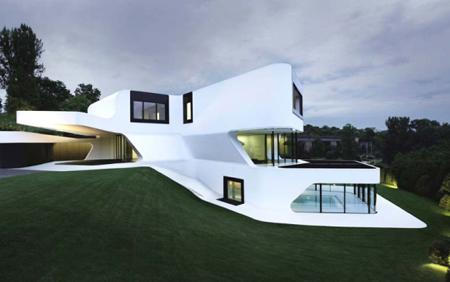 Dupli.Casa is a private villa near Ludwigsburg, Germany, completed by J. Mayer H. last year. The form is derived from the client’s previous house, which had been extended in several direction by various additions and expansions.