By co-opting a time zone as its title, the multi-venued, collective event called Pacific Standard Time demonstrates its dynamic breadth and depth. Beginning with the post-war year 1945, it encompasses exhibits that span 35 years to 1980. The shows, exhibits, and events explore not simply art, but politics and social movements as expressed by activists, […]

By co-opting a time zone as its title, the multi-venued, collective event called Pacific Standard Time demonstrates its dynamic breadth and depth. Beginning with the post-war year 1945, it encompasses exhibits that span 35 years to 1980. The shows, exhibits, and events explore not simply art, but politics and social movements as expressed by activists, artists, community leaders, filmmakers, and musicians from different social, economic, and racial groups. The events are sited all over Southern California, from the  Watts Tower Arts Center in Downtown Los Angeles to San Diego’s Museum of Contemporary Art, East to San Gabriel Valley’ Pomona College’s Museum of Art and North to San Fernando Valley’s Cal State Northridge Art Galleries. The venues range from museums, art and film galleries to street festivals and music theatres.

The Lifted X (1965) image via pacificstandardtime.org

Yet viewing this merely as a series of aesthetic exhibitions trivializes its import and impact. Between 1945-1980, Los Angeles was the site for some of the most powerful, controversial, and historically significant social and political movements in the country, movements that reverberated far beyond its borders. Pacific Standard Time maps those dynamic political, social, and artistic expressions. From Black Power rallies and crackdowns by the police, to protests on Free Speech, nuclear power, and the rights of locally-born colored men and women, Los Angeles has been a location of profound change. Many of these exhibits document the movements that wrought those changes.

By elucidating on different themes through multiple exhibits, the organizers of Pacific Standard Time have ensured several opportunities for examining narratives from different perspectives. What’s more, the openings of these exhibits that began in September, extend through March 2012. This allows everyone who is interested, enough time to attend the different events. Yet whichever events you choose, participation is central because many of the exhibits are meant to evoke active engagement. 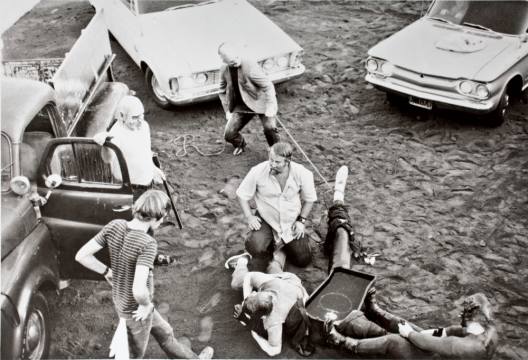 Take for example Edward Kienholz’s Five Car Stud 1969-1972, Revisited. While spotlighting racism in the U.S., it has never been shown here until now. It is impossible to simply “look” at such a piece—it demands participation by everyone to examine their own position within the narrative of racism (as opposed to prejudice, which assumes equal positioning between individuals, rather than oppressive institutional structures) and how each of us relates to power structures that continue to perpetuate it. 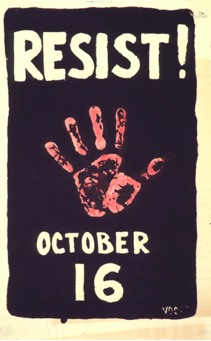 In fact, social movements frame a majority of exhibits throughout the entire 7-month event. Narratives and histories showcase different groups and peoples, of which the following only comprises a partial list. They include African American, Chinese American, LGBT, and Latino/a exhibits and shows. One explores the narratives of LGBT activists and leaders, artists and filmmakers while an archive at the Getty Research Institute highlights peace and feminism movements. Another archive and series of events explores a wide range of social movements such as civil rights, women’s rights, and workers’ rights through posters used to mobilize and engender mass public participation. This is complemented by an exhibit at the Norton Simon Museum which documents that revival of art lithography in Los Angeles. Music at the Grammy Museum examines the social tensions which marked the post WWII period as they are expressed in the richness of LA’s musical landscape within the changing cultural and political terrain of Los Angeles.

For those who want to participate in other cultural events, there are, what are collectively called, Cultural Happenings. Like the entire Pacific Standard Time exhibit, the events here are staggered, beginning in October and stretching to March, 2012. They include a parade, musical events, exhibits on politics, spoken art, and talks on architecture. In fact, almost all of the main exhibitions are complemented by concomitant events that invite, illuminate, and educate. Thus, the exhibit on women’s narratives at Otis College of Art and Design is not simply a showcase of artwork, but a series that ranges from symposiums to spoken word.

Each of these exhibits show peoples that have worked, through a variety of mediums, in ongoing struggles not simply for abstractions like agency and access, but for the basic right to be seen as humans who deserve to be treated with dignity.