Last week I experienced my first New Orleans hurricane. I’d been through big storms in the northeast before—a number of times, one time on a small island—but this one felt different. Maybe it was the timing, so close to the anniversary of Katrina. Maybe I’ve chosen to live in an inherently vulnerable city. The good […]

Last week I experienced my first New Orleans hurricane. I’d been through big storms in the northeast before—a number of times, one time on a small island—but this one felt different. Maybe it was the timing, so close to the anniversary of Katrina. Maybe I’ve chosen to live in an inherently vulnerable city. The good news: the levees performed well (thank you, Army Corps of Engineers), the bad news: the local utility company didn’t. Hurricane Isaac did, however, provide some valuable life lessons:

2. There is no such thing as a small hurricane.
Unlike tornados and earthquakes, hurricanes are easily tracked. You are given ample warning. Having experienced Isaac, I have now established a baseline metric for future evacuations: if a storm turns the corner at Key West and enters the warm waters of the Gulf already a hurricane, I will immediately start packing.

3. Blizzards are more fun than hurricanes.
At some point you can venture out into a snowstorm. Throw a snowball, make a snowman, frolic. In New Orleans you really can’t step outside in a hurricane until the tree limbs stop crashing to the ground. And then what?

5. No tree is safe.
The trees in New Orleans are like massive, otherworldly sculptures. They take on an architectural dimension; they’re as important to the character of the city as the historic buildings. When hurricanes don’t claim people or houses, they invariably claim trees. Here each big one lost feels like a small death. Eighty-year-old oaks are not easily replaced.

6. Living in a boarded-up house is creepy.
A few days before Isaac—on a nice summer day that seemed to mock all of the dire warnings—the man responsible for maintaining our house showed up with the plywood. He covered every large window in the house, plunging us into premature darkness. It felt like we were getting nailed into an air-conditioned coffin. 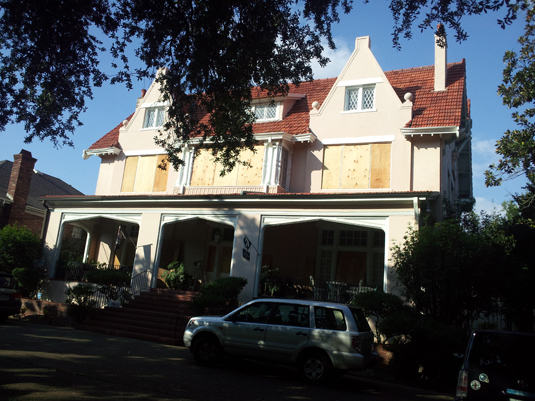 7. Everyone from out of town calls and says the same thing, “It looks bad!”
Not that you’d know. There’s no power, your cell phone is dying, and a peek outside, through a patch of unboarded window, reveals a scientific anomaly: horizontally-falling rain.

8. In New Orleans, there are rituals around everything, even hurricanes.
The lead-up involves a lot of questions, both practical and existential: which path will the tropical storm take? Will Jeremy, Gretchen or Gertrude become a hurricane? If so, how big? How big is too big? Unless a mandatory evacuation is ordered, phase two involves supply hoarding (water, gas, milk, ice, bread, booze) and televised press conferences by the mayor and his cast of “storm managers”. After about a week of this, hunkering down for the actual storm is, if you’re lucky—if the levees hold, if a tree doesn’t fall on your house—an exercise in tedium. Once the storm finally blows over, everyone emerges from their houses, rakes in hand, and a sort of communal clean up commences. “I grew up in Louisiana,” my downstairs neighbor explained. “This is how we do it.” Putting your yard in order is a declaration: we’ve survived another one.

9. Hans Monderman was a genius.
He’s the famous Dutch visionary who discovered that removing all traffic signs actually improved public safety, since everyone became hyper vigilant and slowed way down. With all of the stoplights in New Orleans crippled by the storm, we were living, however briefly, in a Monderman-world, where the busiest intersections were suddenly safe for (gasp!) walking.

10. The Bayou may be doomed.
With sea levels rising and storms expected to increase in frequency and ferocity, it’s hard to imagine a stable future for the towns down in the Bayou. Isaac, a Category 1, created catastrophic flooding. For the rest of us living in coastal communities, they are the proverbial canaries in the coalmine.