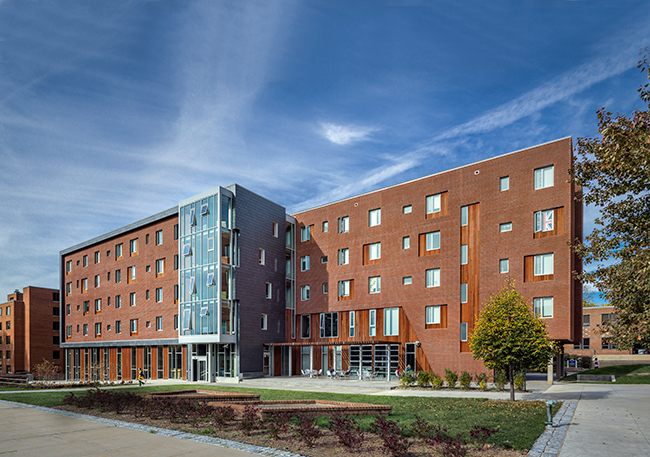 The new residence hall on the campus of Gallaudet University in Washington, D.C., was designed by LTL Architects, in collaboration with Quinn Evans Architects and Sigal Construction.

The new dormitory at Gallaudet University exudes raw energy. Rough wood planks, exposed steel, polished concrete, and gleaming bamboo unite to provide architectural muscle. But the real power comes from a barely detectable dynamic. That energy doesn’t come from how the structure looks on its historic Washington D.C. campus, but how the building functions for the people inside. “It’s about how buildings structure and frame human interaction,” says David J. Lewis of LTL Architects. “The basic conditions of architecture were brought to the fore.”

The glass entry door slides open with a soft whoosh. Students ignore it as they crowd through the gap in a jumbled dance of elbows, hands, arms, and animated faces. Gallaudet is the preeminent liberal arts institution for youth who are deaf or hard of hearing, and most of its 1,821 students communicate with the expansive gestures and expressions of American Sign Language (ASL). That the students can make their way into the building without using their hands to open the door—thus halting the flow of the conversation—is cause for celebration. Here, at least, architecture has gotten out of their way.

The sliding glass entry is a minor metaphor in a larger design drama. This five-story, 60,000-square-foot Living and Learning Residence Hall 6 represents the first full-fledged experiment in DeafSpace design, a concept developed at Gallaudet through years of research into how buildings and interiors impede communication for people who don’t hear. The residence hall represents a holistic example of best practices involving optimum space, better light, adequate proximity, calibrated color, and good acoustics—factors that matter a great deal (but not exclusively) to the deaf. 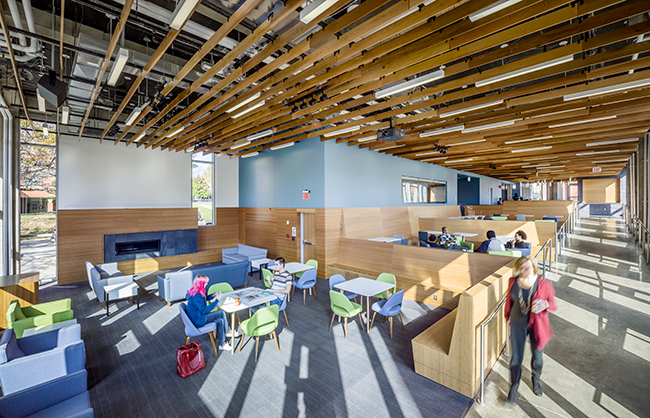 The central “living room” doubles as an auditorium.

In collaboration with Quinn Evans Architects and Sigal Construction, LTL won a design/build competition organized by the campus architect and planner, Hansel Bauman. Bauman, who is not deaf, engaged 20 Gallaudet residents, including Robert Sirvage (who happens to be an especially lively presence on YouTube). Bauman also brought his catalog of 150-plus DeafSpace guidelines. “DeafSpace is about awareness and sensitivity,” Bauman says. “It’s about creating empathy between the individual and the building.”

The residence hall opened last fall on Gallaudet’s 99-acre campus in Northeast Washington, D.C. The school was founded in 1864 and renamed in the 1950s for Thomas Hopkins Gallaudet, founder of the first school for the deaf in the United States. High Victorian architecture and vestiges of a master plan by Fredrick Law Olmsted and Calvert Vaux rate listing as a Historic District on the National Register of Historic Places.

Figures on how many Americans rely on sign language are hard to come by, but the federal Survey of Income and Program Participation (SIPP) for 2005 suggests that as many as ten million Americans are hard of hearing and one million more are functionally deaf. An estimated four percent were younger than 18, while half were older than 65. An aging population suggests that number won’t shrink.

DeafSpace design seeks to codify responses to common situations standing in the way of safe, fluid conversation for people who use sign language. The list includes uneven pavements; narrow passages; unexpected steps; inadequate lighting; backlighting; glare from white walls; wall colors that blend with skin tones; and, especially, fixed-row auditorium seating, which blocks the visibility required for communication. At the residence hall, the design team addressed such problems in myriad ways, from choosing paint colors that reduce glare to designing a broad, smooth ramp to lead a crowd into an assembly hall without the risk of steps. 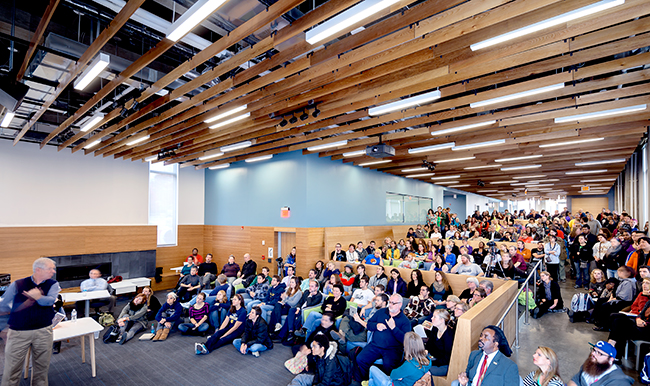 On a sunny afternoon in May, the design team regrouped with Bauman and Sirvage, now an adjunct instructor, in the building’s signature space: an airy, glass-walled, three-tiered assembly hall, which doubles as an extra-large living room. Sirvage described the value of the seven-foot-wide ramp as he descended to the lowest and most generous tier, beside a likable hearth and beneath a 17-foot ceiling of floating cedar slats. He settled into a chair with his back against the wall. With no one behind him, he could concentrate on conversations taking place in the circle in front of him. It was significant that he also could see the entire length of the 100-foot-long hall. Although empty at the moment, the space was designed so that people gathered at the top tier could sign to those at the bottom. Through a wall of glass to the east, Sirvage observed students coming and going outside the library. He was close enough, and the wall was transparent enough, for him to attract someone’s attention with a wave. “This building is a huge step forward in what space means from a deaf perspective,” he says. “Ordinary buildings are superimposed on us. Here, there is a deep connection to vision. It helps the formation of community.”

Faced with a tight budget and strict time frame, the design team rallied around a simple plan for two rectangular boxes offset against a third, longer one and joined at a central open stairwell. The ground floor is devoted to multipurpose spaces, such as the living room/assembly hall. Four upper floors house 173 dorm rooms plus four faculty apartments. At the heart of the building, stacked, glass-walled lounges open vistas to and from the campus on each floor.

By design, no corridor extends more than half the length of the building, or about 90 feet. While deafness is widely perceived as an inability to detect sound, at Gallaudet, the equation has been refocused on the visual dimension: People who don’t hear have a heightened need to see. The gestures and facial expressions of signing require rapt attention and clear sight lines, whether someone is seated around a conference table, meeting on an open-stair landing, or gathered outside the last dorm room at the end of the hall. “The building is all about vistas,” explains Jeffrey Luker, principal at Quinn Evans.

Despite the bare-bones aesthetic of cast-in-place concrete, prefabricated metal, and open ductwork, a four-story bamboo feature wall in the stair hall provides a bit of glamorous decoration. But stylistic impressions miss the point: spatial dynamics rule. Corridors are six-feet, eight-inches wide, so two people walking abreast have adequate space between them to sign. Dorm room doors were inset by two feet on both sides of the hall to carve out gathering places 11-feet wide. Built-in seats outside each door encourage groups to form. A lighting system announces a visitor’s arrival. In the lobby and on residential floors, blind intersections were banished in favor of glass-walled corners. (An earlier experiment with curving walls did not prevent surprise encounters. People simply hugged the curve and continued to run into each other.) Expanded stair landings were meant to give people the space to step out of traffic and converse without impeding others. Lighting is heightened for maximum visibility. Wall colors—deep blue, bright green, maple-leaf red—were selected to enhance the contrast between a backdrop and skin tones. Expanses of glass contribute to conventional daylighting, which helps to reduce eyestrain. 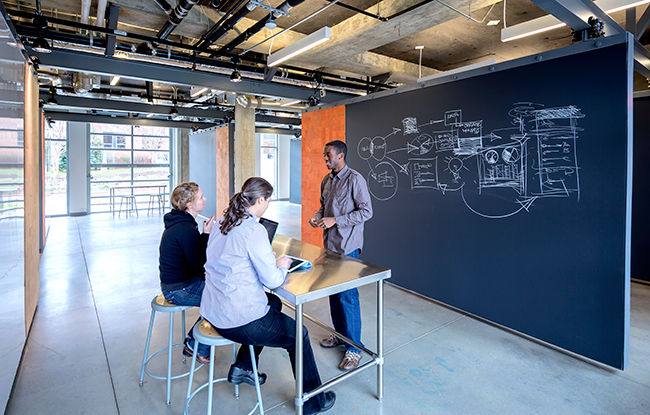 Industrial materials define the aesthetic of the CoLab experimental studio.

No space is more dramatic than the living room, which descends along the gently sloping contour of the site. The staggered platforms absorb the change in grade while providing intimate spaces for small groups, as well as assemblies. Students were just beginning to figure out how to make use of the tiered lounges, Bauman says, but “the sight lines are amazing.” In the nearby CoLab (for collaboration), glass garage doors connect the space to the outdoors on both sides. Sirvage focused on the lighting controls. Teachers flash lights to call deaf students to attention. “You need to be able to adjust in the moment,” he says. To lack control over the lighting is to be at the mercy of “tyrannical space.”

In the student kitchens on the residential floors, the designers took extra care to install appliances in the center islands instead of along the walls, so cooks wouldn’t have to turn their backs to the room. For Lewis, such simple gestures were nothing more than “good design” and “a sense of graciousness” that has sometimes slipped from practice. “In the end,” he says, “our goal was to intensify the social relationships between members of the campus community through an architecture that framed and enhanced visual communication.” 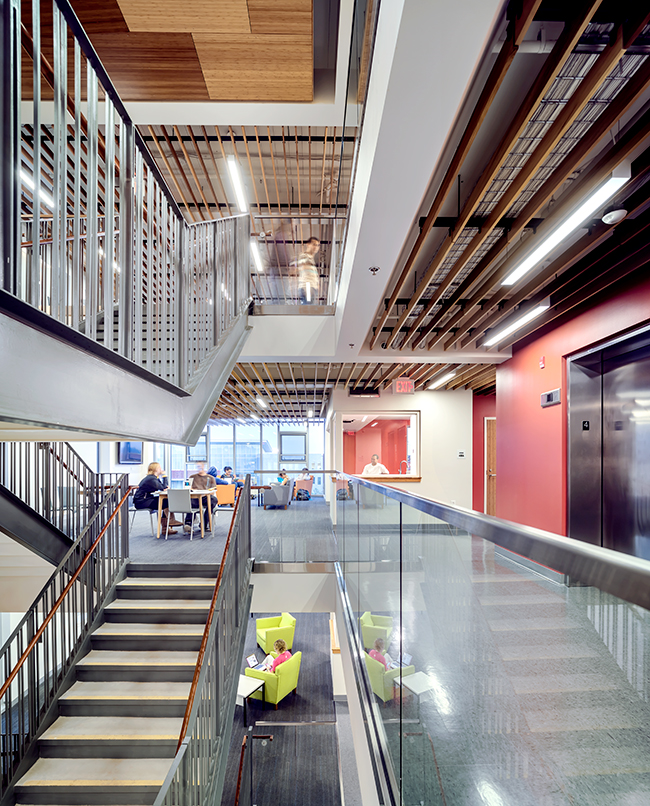 Livability is enhanced by a combination of daylighting, finely tuned acoustics, and clear sight lines in the open-stair hall.