Making Room, a new exhibit at The Museum of the City of New York (MCNY) has struck a serious nerve with New Yorkers. The exhibit, which will be on view until September 15, shines a light on many of the city’s biggest housing problems, and puts on display several architectural proposals designed to alleviate them. Mayor Bloomberg has even gotten the city government involved, and is strongly pushing for many of the solutions it suggests.

The impetus for the exhibit was a set of figures uncovered by the Citizen’s Housing Planning Council (CHPC) that showed a disparity between the types of available housing in New York, which are primarily designed for traditional nuclear households, and the increasing demand for single and other non-traditional housing. Currently, only about 18 percent of the city’s population is part of a nuclear family household. Yet over half of New York is single, and the city lacks enough single bedroom and studio spaces to house them. Coupled with this are decades-old city regulations that place restrictions on how and where people can live. For instance it is illegal for more than three unrelated adults to share a residence, or for someone to inhabit a living space smaller than 400 square feet. These restrictions mean that residents are resorting to their own improvised solutions, which are often dangerous or illegal, to be able to live in this outmoded housing stock. Topping it off, the city will need to absorb a projected increase of over 600,000 new residents in the next twenty years, most of whom will also not find the current housing stock appropriate. Sensing this problem back in 2011, CHPC and the Architectural League invited five teams of architects to submit proposals for housing solutions that could alleviate these problems, keeping restrictive zoning ordinances a non-factor in their designs. The submissions took several different approaches, primarily focusing on flexibility of use, compact living quarters and shared spaces. One design, by Deborah Gans, proposed a series of conversions that could be performed on a single family home in Queens, which would allow the owners to rent out extra sections of the house when they no longer needed the space themselves. 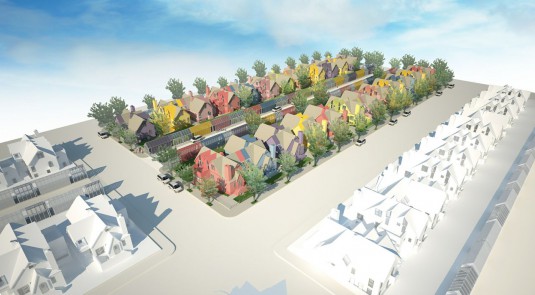 A rendering of a street of converted single family homes in Astoria, Queens. The conversions would allow the original owners to rent space in their homes that otherwise be would underutilized, while still maintaining adequate space and privacy for owner and renter. Rendering by Gans Studio. Courtesy MCNY. Several others looked at smaller living spaces for singles who would not need the size of a typical apartment. These proposals frequently incorporated shared common facilities, like kitchens, as a means of keeping the small private living spaces feasible. One of these, designed by Ted Smith, even incorporated such fanciful space saving features as a collapsible bathroom. However, despite the innovative solutions to the problem these designs posit, none would be legal under current city zoning restrictions. Then, last year, Mayor Bloomberg upped the ante by announcing the adAPT NYC competition, which asked teams to design an entire building of micro-units. This time a winning entry was to actually be built on city-owned land, and a special exemption would be enacted which would allow the units to be under the 400 square foot minimum. A rash of innovative submissions followed the announcement, surprising the Mayor’s office with the level of interest it generated – 33 proposals in all, more than ever before received for a housing project. 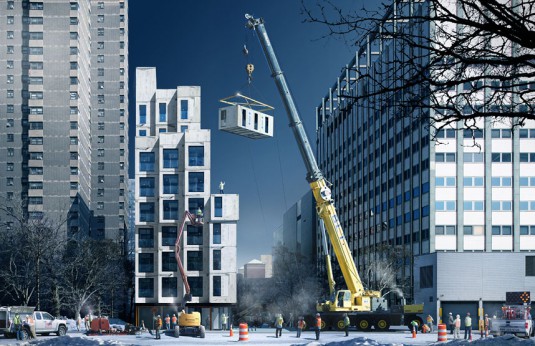 A rendering of My Micro NY’s modular assembly. The pieces would be built at the Brooklyn Navy Yards, and assembled on site. Image courtesy mir.no

On January 22, the winner of the competition, a modular design by nArchitects called My Micro NY, was announced at the Making Room exhibition one day before the exhibit opened. The winning design will house 55 units that are to be prefabricated in Brooklyn and assembled on site on East 27th Street. The units will range from 250 to 370 square feet and be supplemented by other common areas throughout the building including a roof garden, a bike room, and a lounge. 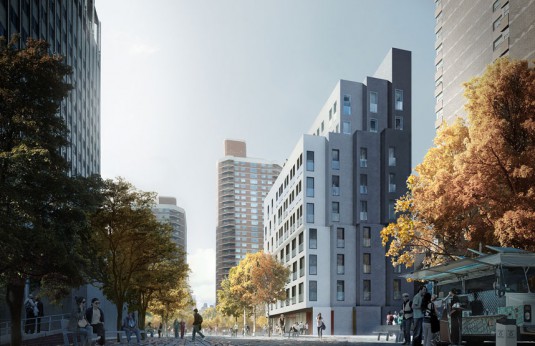 A rendering of the exterior façade of My Micro NY. Image courtesy mir.no.

A rendering of the interior of a My Micro NY unit. Image courtesy ledaean.com. 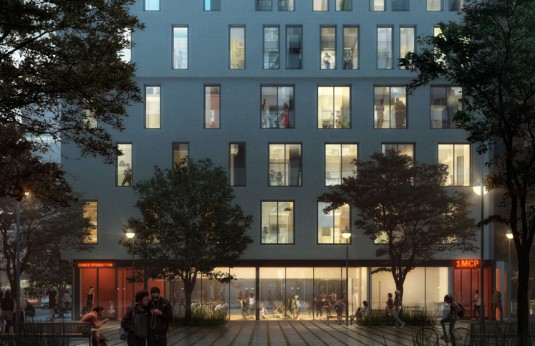 A rendering of the bottom floors of My Micro NY. Image courtesy mir.no.

My Micro NY is being featured at MCNY along with four other runners up and the five original proposals. And while many skeptics are railing against the seeming ludicrousness of these tiny apartments, the exhibit rebuts these criticisms with a full size mock-up of a hypothetical micro-unit. 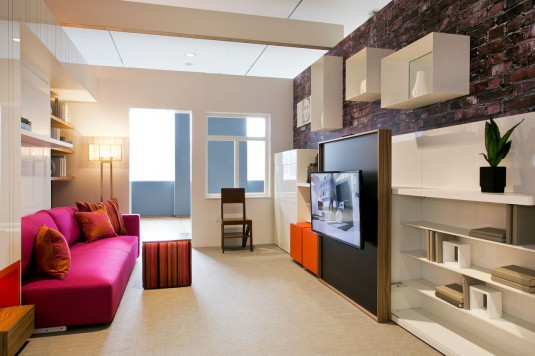 The centerpiece of the exhibit, a walk-in, fully furnished apartment, demonstrates what an ideal micro-unit could be like. Though small by most standards at only 325 square feet, what stands out most is how big the unit feels thanks to its efficient use of the space. The apartment is replete with furnishings that transform, tuck away, and reconfigure to give the space an astonishing amount of versatility, and leave the floor space very open. There are the obvious space-saving solutions, like the Murphy bed that conceals itself in the wall behind the couch, along with several surprises: the small coffee table that contains an entire set of stools or the closet that swings down from out of arm’s reach and stows away again just as easily. 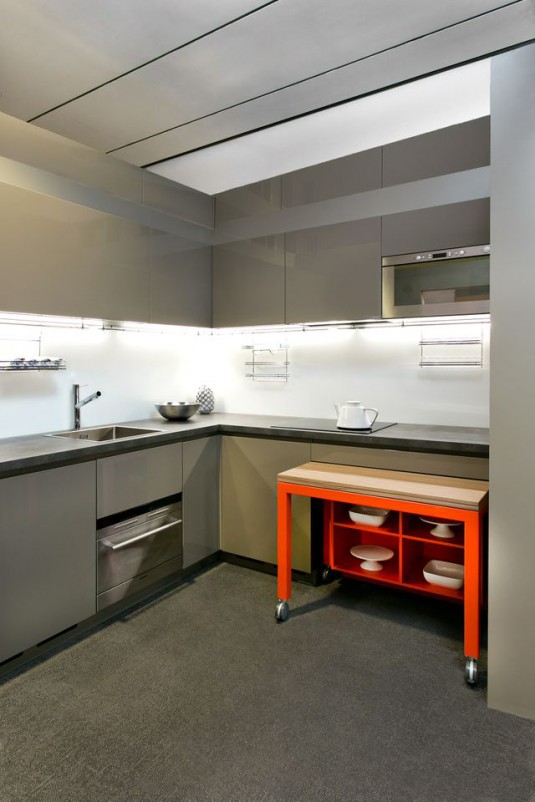 The micro-unit’s kitchen includes a roll out dining table, dishwasher, and other amenities. Image by John Halpern. Courtesy MCNY. 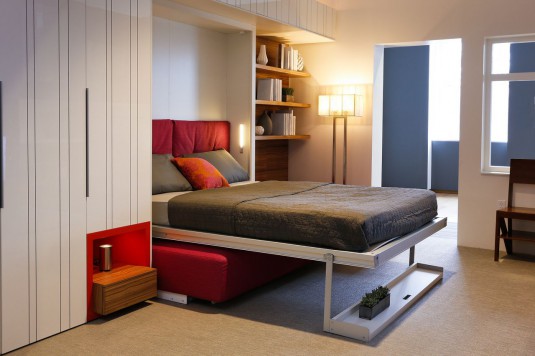 The micro-unit, with the Murphy bed lowered, is ready for the evening. Image by John Halpern. Courtesy MCNY.

The lesson is that small does not need to mean uncomfortable if it is designed thoughtfully enough. And not only can it be done, it is already being done in cities around the globe. Azby Brown, who writes on minimal Japanese living spaces, noted in a January 24th panel discussion at MCNY that in Tokyo, spaces as small as 180-190 square feet are quite normal for single inhabitants. Historically, even smaller spaces have been quite common. Hong Kong also has a long track record of finding creative ways to fit comfortably into small living spaces. Making Room shows many of these already built examples, from Asia, to Montreal, to the west coast. The implicit question is not, “can it work?” but “will it be done in New York?” 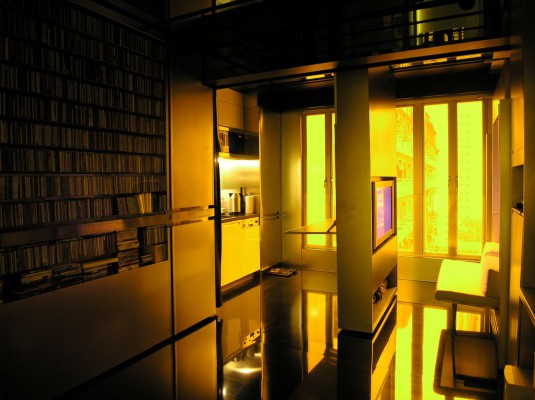 With adAPT NYC expected to break ground before Mayor Bloomberg leaves office, a big first step has been taken. Now it remains to be seen if the idea will stick.