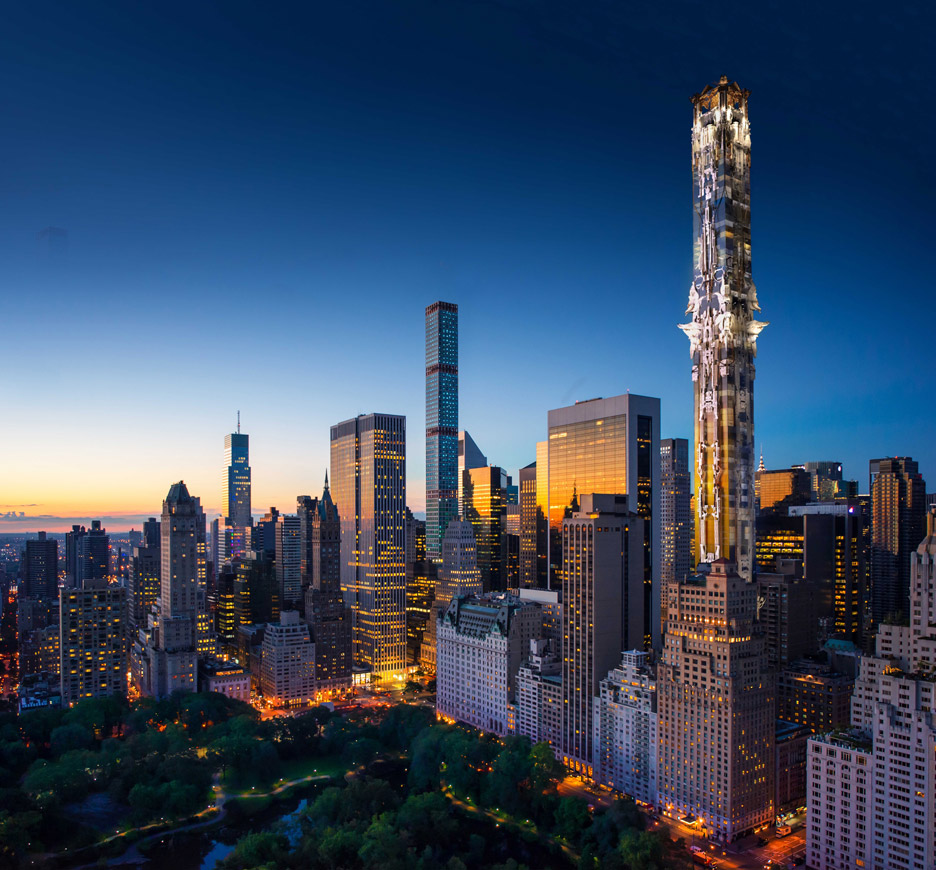 Dubbed “the Khaleesi” after the dragon queen in Game of Thrones, the planned 102-story residential tower is a feast of ornamental forms, derived in part from New York’s Art Deco landmarks.

In the chaotic months after the 2008 financial crisis, a small-scale trend emerged within New York’s resident population of millionaires and billionaires. Faced with the possibility of resentment among their less affluent neighbors, some took to disguising luxury purchases from the likes of Hermès and Louis Vuitton in brown or white bags, formerly associated primarily with dubious goods such as alcohol or pornography. Architecturally, the extension of this impulse might be found in the regular, restrained, curtain-wall-clad supertall towers of the newly monikered Billionaires’ Row on West 57th Street.

These towers are certainly ostentatious by virtue of their incredible height—the tallest so far reaches 1,396 feet—which makes them visible from many unexpected areas of the city, and their shadows encroach on the public amenity of Central Park, which lies just to the north. Designed during the slow rebound of the housing market, when real estate speculation became a profitable enterprise again, the towers adopt a somewhat circumspect attitude toward the wealth locked up in their floor plates, still tempered by the post-2008 sensibility. The facade of Rafael Viñoly’s 432 Park, for example, comprises a grid of stacked square windows, while gleaming glass surfaces gently rise to a razor edge in Christian de Portzamparc’s One57.

By contrast, Mark Foster Gage Architects’ recently unveiled design for a 1,492-foot residential tower on West 57th Street ditches the paper bag completely, girding the structure with a sumptuous crust of carved and gilded forms. The design is so sculptural that it has been nicknamed “the Khaleesi” after the proud and bejeweled dragon queen from Game of Thrones, and has also prompted comparisons to Michelangelo. Architectural fragments climb the four corners of the building, jutting out into colossal winged balconies halfway up and culminating in a diadem of bronze and limestone ornament at the top. This collection of forms draws on the Art Deco heritage of New York City skyscrapers—Rockefeller Center, the Radiator Building, and the Chrysler Building—with pieces of eagles, machines, and fine tracery clearly visible.

The sheer quantity of forms used in the design reduces the meaningfulness of each one.

Rather than attempt a stylistic revival, however, Gage and his team used cutting-edge software and a form-making technique they call “kitbashing,” derived from a longstanding modelmaking tradition of combining parts from various kits, to arrive at the final composition. “Kitbashing is simply accessing the online world of premade digital 3D models, of which there are hundreds of thousands,” Gage explains. “We use these 3D models as the bricks, so to speak, of the buildings themselves, imbuing any design with really gorgeous figural qualities that can be fabricated through existing technologies like CNC milling and casting in stone or concrete.” According to Gage, the goal of this methodology is “to produce things like awe, wonder, mystery, and curiosity.”

But this aesthetic of wonder is, of course, at the service of another aim, namely the production of high-value real estate. Working with an unnamed developer, Gage’s team was tasked with designing a future building with units capable of fetching market prices of $20,000 per square foot. And while architects are obviously deeply involved in fine-tuning designs to fit the requirements of profitability and construction efficiency, Gage made these exigencies more consciously part of his design offering. “Real estate is a language of equations, to which architects add a bit of life,” Gage says. In this case, Gage’s team tweaked the equations for the 102-story tower with capacious balconies, a four-star restaurant, a two-story ballroom, and the ornament itself, which affords each unit unique views of New York.

And while the tower on 57th Street certainly participates in the speculative real estate market, it is speculative in another way: it was not necessarily designed to be built. Rather, it serves as a sort of proof of concept, or as Gage puts it, it’s “a ‘runway’ project, not ‘ready to wear.’” But if this is the case, then what, beyond proving its own marketability and testing an aesthetic sensibility, is at stake here?

“There are, today, far better ways to communicate than through architecture.”

Unlike many conjectural projects famous in the history of architecture—one might turn to Adolf Loos’s Chicago Tribune Tower proposal, or perhaps OMA’s design for the Hotel Sphinx in Delirious New York, for a tower-typology parallel—that operated with political or social objectives in mind, Gage’s hypothetical high-rise speculates on a purely aesthetic basis, gesturing to affective states, the emotions stirred in inhabitants and viewers, rather than possible changes to economic structures. “I’m totally opposed to architecture being only a vehicle for unusual and densely solipsistic drawings,” Gage says of more academic-minded projects. And certainly the design intent and realizability of the tower are clear. But most likely, there are other ways to get to $20,000 per square foot without having to put so much effort into generating such a complex design.

As much as he pushes back against paper architects, Gage also seems to oppose purely pragmatic architecture, hinting that the tower design is perhaps a way to carve out more space for architects within the spreadsheet-driven city building machine. “In a sense we decided that we had to go back to architecture,” he says. “We had to produce something absolutely contemporary yet loved for its actual architectural qualities—not only its location or height.” He continues, “It takes longer to design an icy princess castle in Frozen than it does to design a 100-plus-story building in New York City these days.” If height, proportion, and usable floor area are givens, then the architect should assume as much control as possible over what is left. Indeed, Gage has previously criticized some other architects as “product pickers” who cobble together off-the-shelf materials instead of articulating every part of their design.

One could be forgiven for concluding from the renderings that the tower is in fact a step back into Postmodern symbolic language, with the various motifs and sculptural fragments standing in for meaning. These possible interpretations of the project prompt Gage to clarify: “There are, today, far better ways to communicate than through architecture. When everyone has a smartphone, architecture is relieved of its communication duty and is free to explore new ideas about value, luxury, and even, dare I say, beauty.” The sheer quantity of forms used in the design reduces the meaningfulness of each one, eventually allowing the building as a whole to read as a single form, with none of its elements explicitly saying anything.

But the design itself does communicate, and often in ways highly attuned to pop culture. It’s not for nothing that it has been called the Khaleesi, even by its creators. This pop sensibility is quite different from that of the 1960s—celebratory rather than ironic, awe-inspiring rather than cynical, seductive rather than political. Of course, Gage’s tower also succeeds in conveying the wealth and status of its potential future inhabitants, a trophy for living in. And yet buildings inevitably do have economic, social, and political consequences, generally far more extensive than those imagined by even the most politically inclined speculative architects. Professional and personal interests have a way of exerting even greater influence when speculation is made concrete. 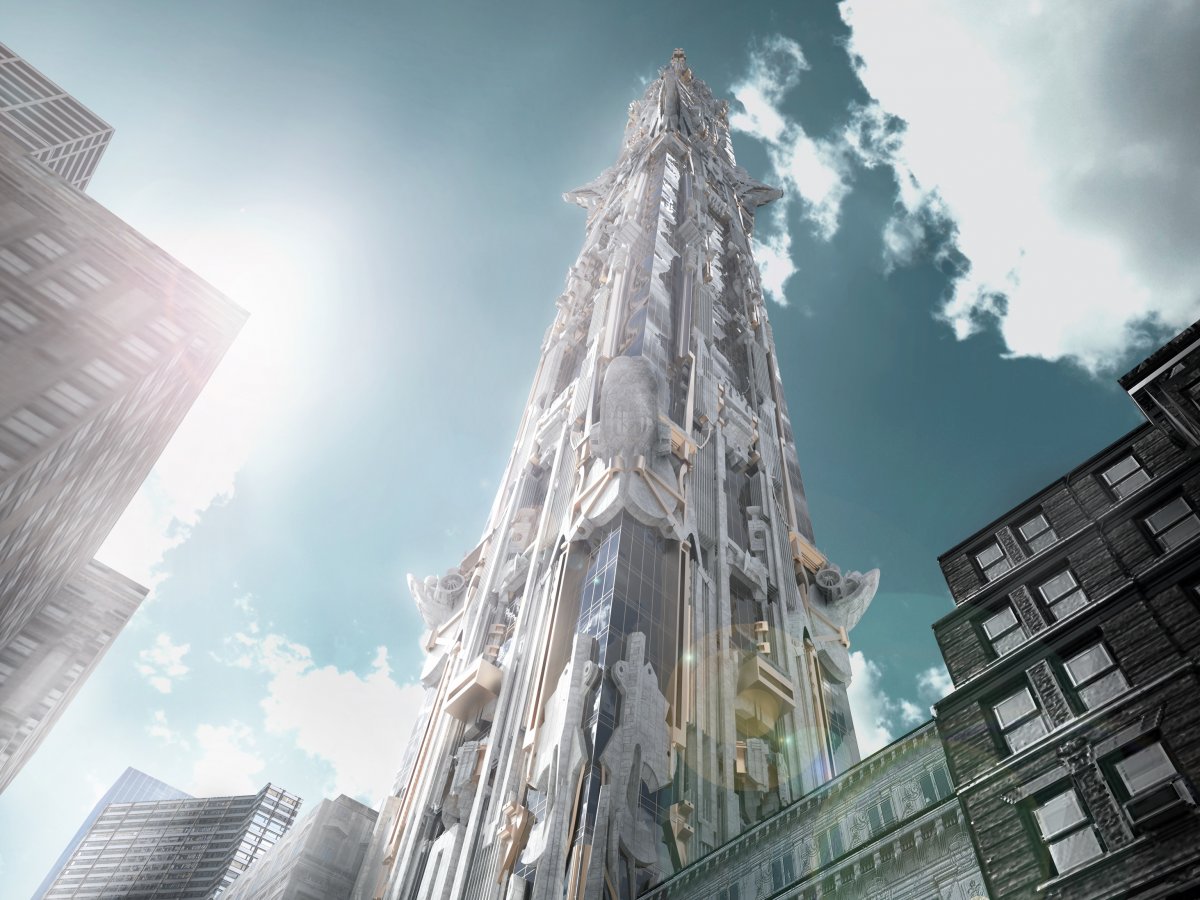 With its expressive gargoyle-esque figures and limestone-tinted concrete panels, the tower harks back to an earlier era of skyscrapers. 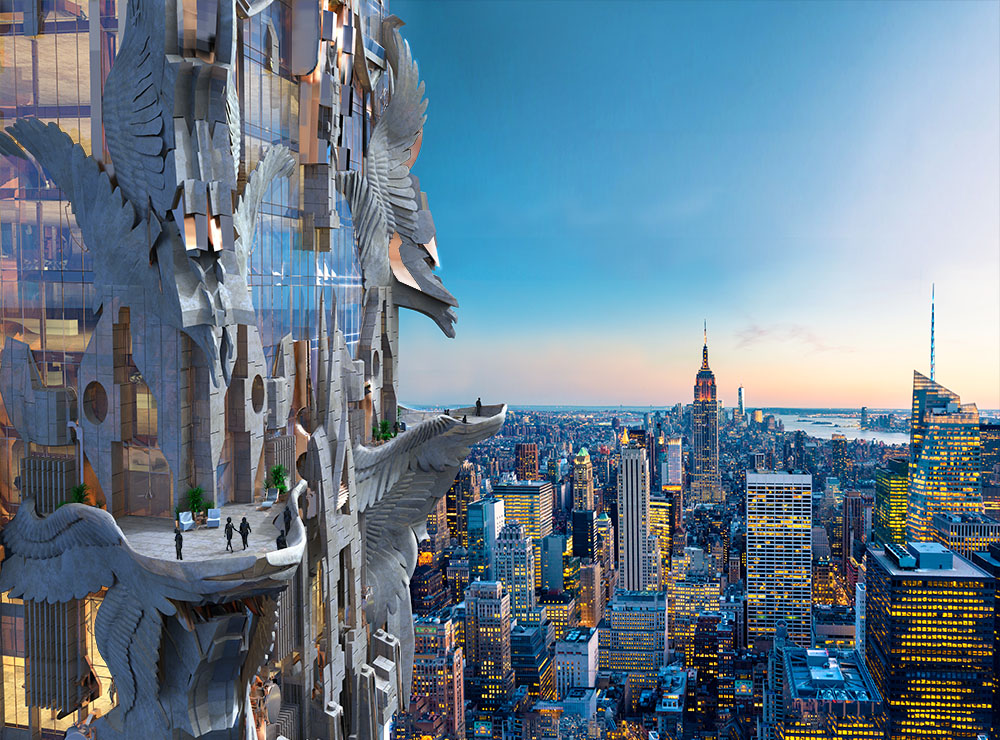 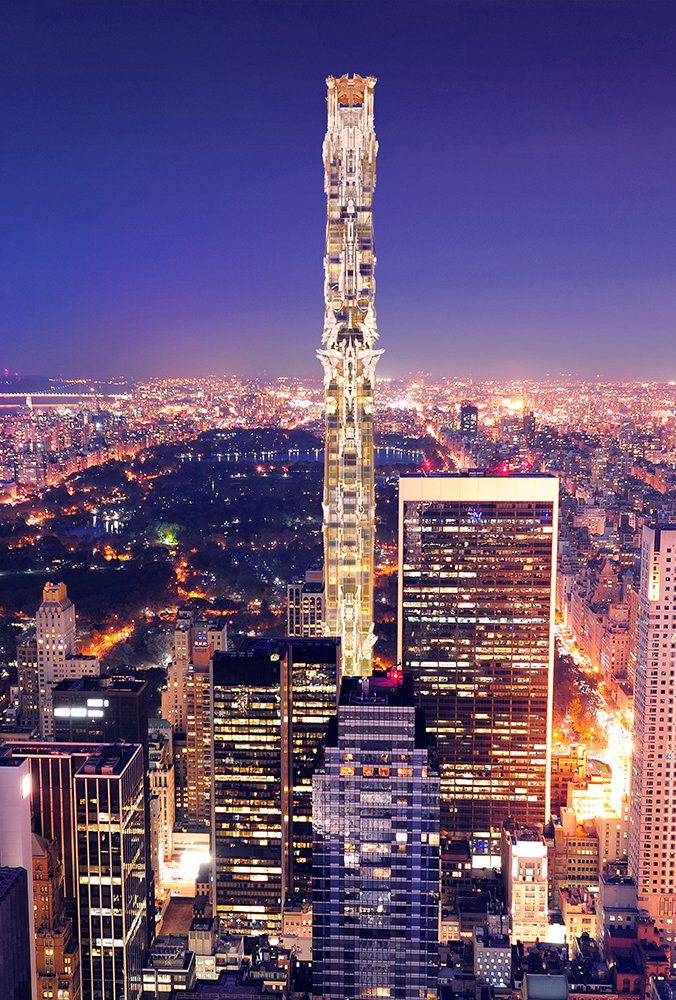